About seven hours from Szaffytta, towards Kalaat Maszyad, are the ruins of a temple now called Hassn Soleiman, which, according to all reports, is very deserving of the traveller's notice; as indeed are all the mountains of Szaffytta, and the whole Anzeyry territory.
John Lewis Burckhardt - Journal of a Tour from Aleppo to Damascus in February and March, 1812.
The Al-Ansariyah mountains divide the coastal plain of Syria from the Ghab, the valley of the Orontes River; their maximum height barely reaches 3,000 ft/900 metres, yet these mountains acted as a natural border between the Phoenicians on the coast and the great empires of Mesopotamia.
The southern section of the range belonged to a Phoenician principality based in Aradus (today's Arwad), a very small island three miles off the coast, opposite today's Tartous. 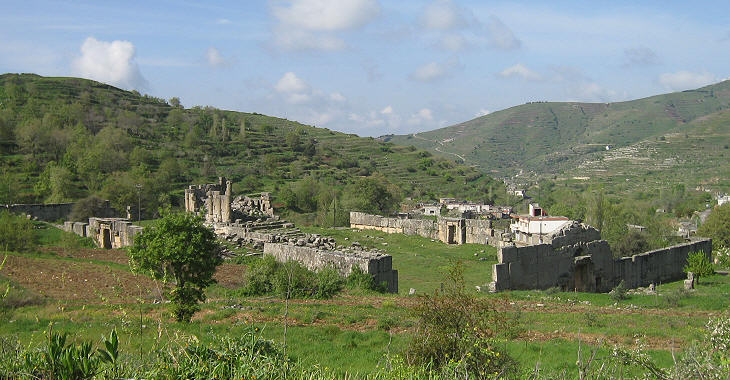 Overall view of the shrine

In the Greek-Roman world the range was known as Bargylus; it was covered with forests of pines, oaks and cedars; a clearing in a wood, maybe surrounding a taller tree (similar to what occurred at Dodoni in the mountains of Greece), became the site of religious rites in honour of Ba'al, the main deity of the Phoenician mythology and to whom Mount Casius, a high mountain north of Bargylus and south of Antioch, was sacred.
Today's approach to the shrine is not very different from that experienced by the first western travellers who visited the region: It was in the midst of these mountains that I found, in the locality of Hosn Suleiman, the ruins of the temples to Jupiter, which had only been mentioned by Lieut. Walpole and whose scientific importance was yet unknown. The first thing which strikes the eye in descending towards the site of ancient Baetocece is a vast enclosure. (...) It is the best preserved specimen of sacred enclosure.
Benjamin Harris Cowper - Journal of Sacred Literature and Biblical Record - April/July 1866 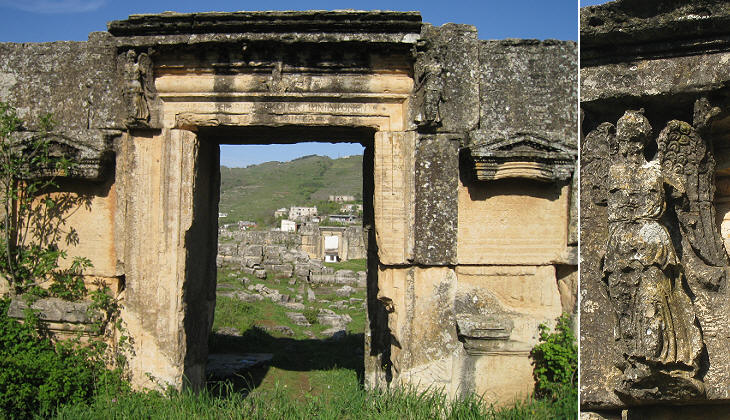 The current shrine was built in the IInd century AD when Syria was a Roman province and it was dedicated to Jupiter Baetocece, the second name being that of the shrine location; this meant that Jupiter Baetocece was regarded as a genius loci, the protective spirit of the place, rather than the deity of the Greek myth.
The orientation of the shrine is not aligned with the cardinal points, as occurs in most Greek/Roman buildings and it probably reflects the original orientation of the early shrine.
In the IIIrd century the Romans built a temple to a local ancestral deity at Faqra in Lebanon.

South-eastern gate: decoration of the horizontal side of the lintel showing an eagle carrying a caduceus (an astrological symbol representing the planet Mercury) between two male allegories representing the morning and the evening star (identical to that of the Temple of Bacchus at Baalbek)

The shrine was located inside a rectangular enclosure with four gates, each of which has the horizontal side of the lintel decorated with the same relief; the presence of astrological/astronomical symbols is indicative of the interest in the stars and the sun at the time the shrine was rebuilt and for most of the IIIrd century AD. Roman Emperor Heliogabalus was a high priest living at Emesa in the plain east of Bargylus and his name meant "the God of the Mountain". 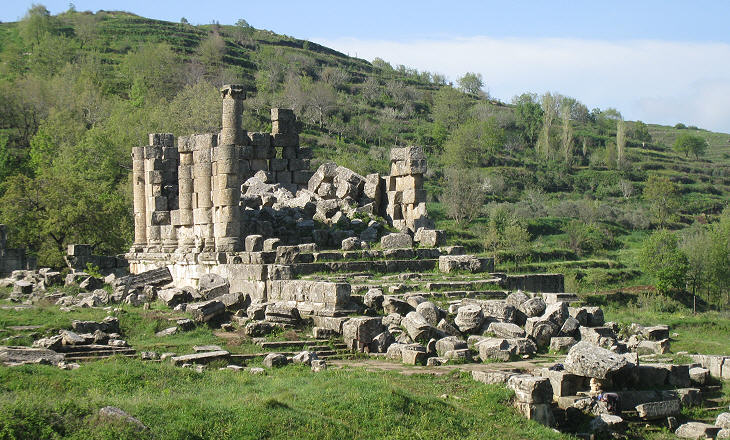 The shrine is preceded by an open air altar which is almost at the centre of the rectangular area demarcated by the walls; the building had the only function of housing the statue of the god; ceremonies took place in the open air altar. 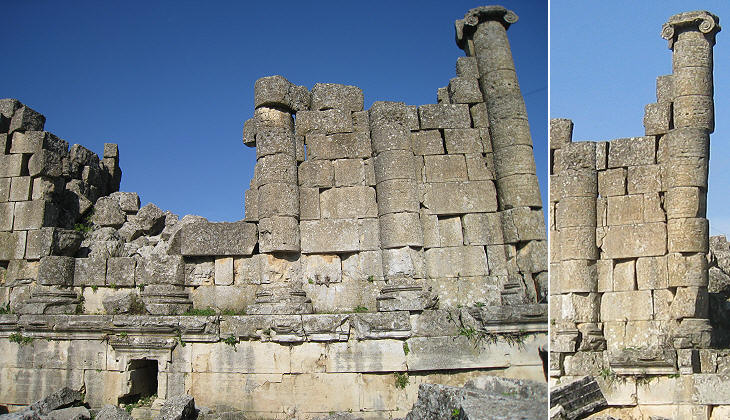 Shrine: (left) south-eastern side; (right) the only remaining column

A decorated, but very small opening in the basement allowed access to an underground cell; it was possibly used by priests to reach the interior of the statue of the god and make it speak similarly to what occurred at the Temple to Serapis in Pergamum.
The construction technique used for the shrine and the enclosure walls is based on the careful juxtaposition of blocks of stone and it does not make use of the techniques developed by Roman engineers such as supporting arches, fired bricks and mortar. A very advanced use of the careful juxtaposition of blocks was developed in the IVth/Vth centuries at Sergilla and other locations in the north of Syria. 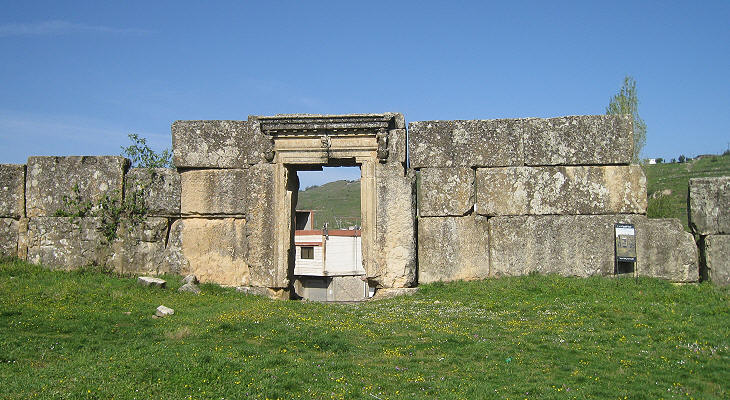 Inner side of the north-western gate

The wall surrounding the temple did not have a defensive purpose, but that of indicating an area reserved for ceremonies and which was subject to special legislation (temenos); for this reason we call sanctuary a place of refuge or safety. 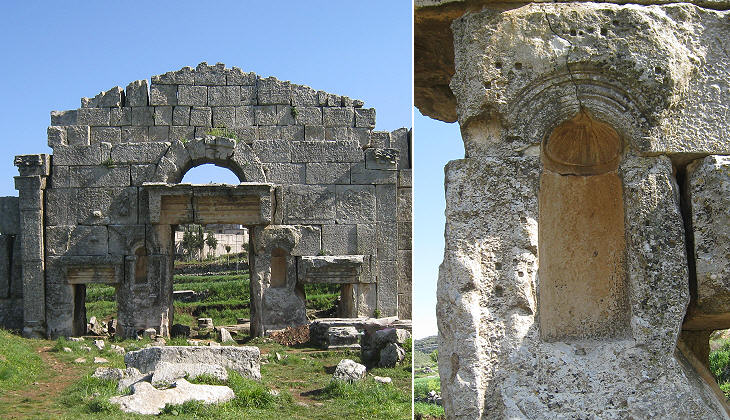 The main gate is flanked by two minor openings and its lintel is decorated with a small arch; small niches housed statues, perhaps of Emperors Valerian I and Gallienus who are mentioned in an inscription where they confirm the privileges of the shrine. Another inscription celebrates a major restoration in 171 AD. Entrance to the second shrine

The area outside the walls has not been excavated yet and the only other ancient building near the enclosure is a gate which probably belonged to a shrine dedicated to Astarte, a goddess worshipped in various ways in the Eastern Mediterranean region and whom the Greeks associated with Aphrodite.