Sergilla (or Serjilla) is located in Djebel Zawiyé, the southern section of the range of limestone hills along the right bank of the Orontes River in Syria. In the early centuries AD the olive oil produced in the northern and central sections of the range was sold at Antioch, the largest and richest city of the region, whereas that produced in the southern section was most likely sold at Apamea, at the time a flourishing city. Sergilla spreads out on two hills and its most interesting buildings are located in the valley between them; there is no clear evidence of the regular net of streets which characterizes ancient Roman and Greek towns. From the inscriptions found in the main buildings it seems that the village underwent an expansion in the Vth century, a period during which fears of Sassanid attacks or Bedouin raids must have been very low, because the village was not protected by walls or other fortifications. 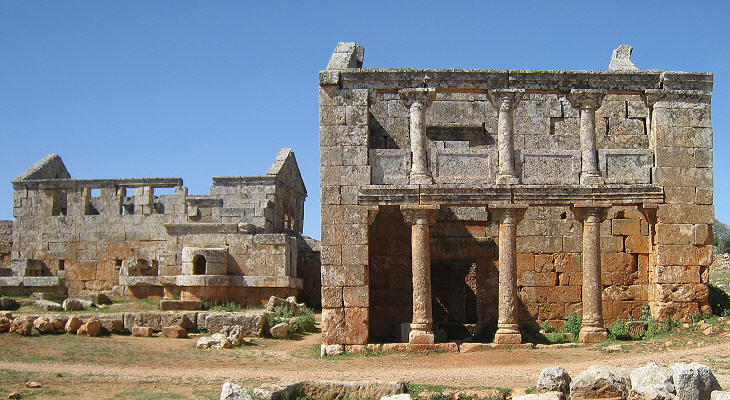 Other dead towns of the limestone hills have become famous for their early Christian monuments, whereas Sergilla retains some public buildings which provide an interesting insight into everyday life in the rural areas of the Late Roman Empire.
Ancient towns had a central area (forum or agora) which housed tribunals and markets and where people gathered to exchange views and learn the news of the day; at Sergilla there was a single building which served this purpose; it is called andron, a Greek term indicating the section of a house that was reserved for men.
Many people visit this area and in general Syria during the summer season and they may associate the country with very hot temperatures, but winters can be quite frigid with snow on the hills and this explains the presence of a building where people could gather inside. 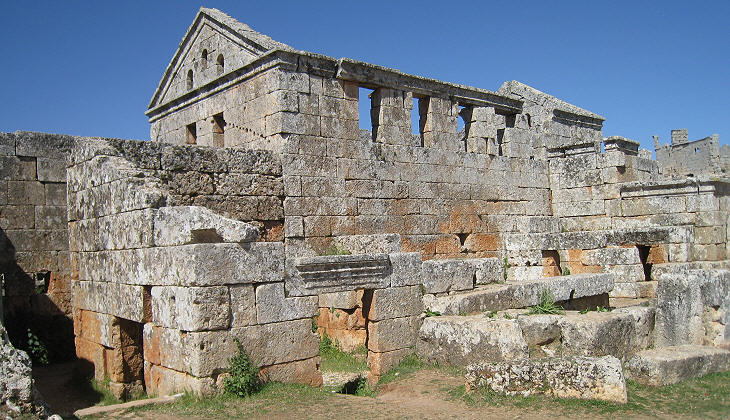 An inscription found in the baths indicates that they were built in 473 at the expense of a rich couple who wanted to make a gift to their fellow-citizens; the main hall where people undressed was decorated with a (lost) mosaic; the baths did not have the structure of thermae, but they did have a small room for hot baths. 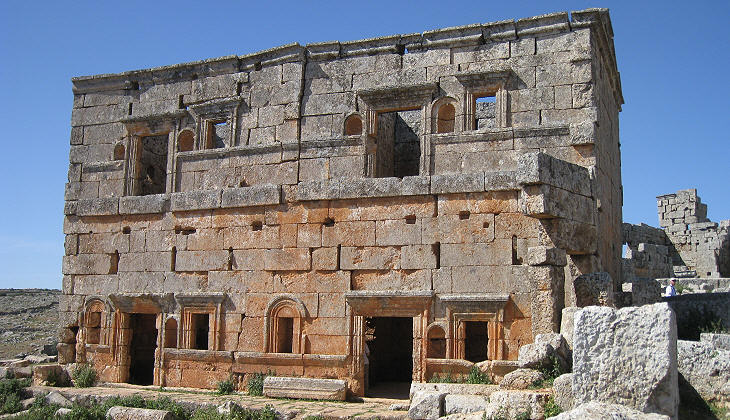 A very elegant house with mouldings similar to those found in the church of Qalb Lozeh is located near the top of the northern hill; it has a very "modern" appearance; the presence of many doors and windows indicates a design very different from the traditional Greek and Roman houses which were centred around an internal courtyard (a pattern which will be adopted by the Arabs in the following centuries). 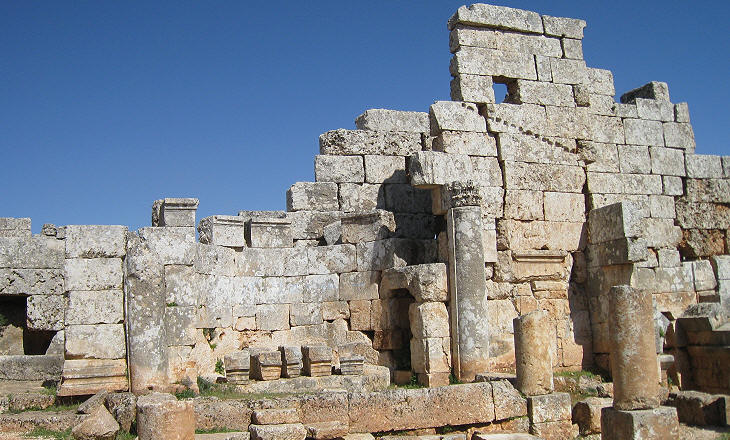 In comparison with the public buildings and some private houses, the main church of Sergilla is a relatively modest building, probably of the IVth century; it is much ruined, but its apse is still easily identifiable; it is located near a complex of facilities for the production of olive oil which is shown in the introductory page. The elaborate Chi Rho (Christogram) which is used as background image for this page was photographed at the Museum of Maaret an-Nouman which houses finds of the region near Sergilla; it shows also the Alpha and Omega, another reference to Christ. 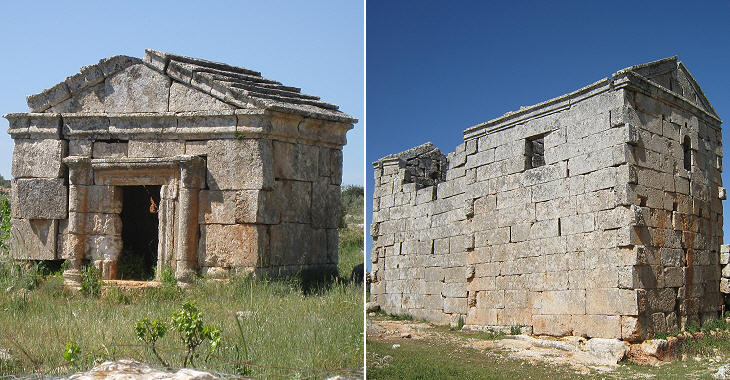 The term "dead town" is particularly true for Sergilla where many minor buildings are almost intact and are still roofed, an aspect which can be rarely observed in other villages. 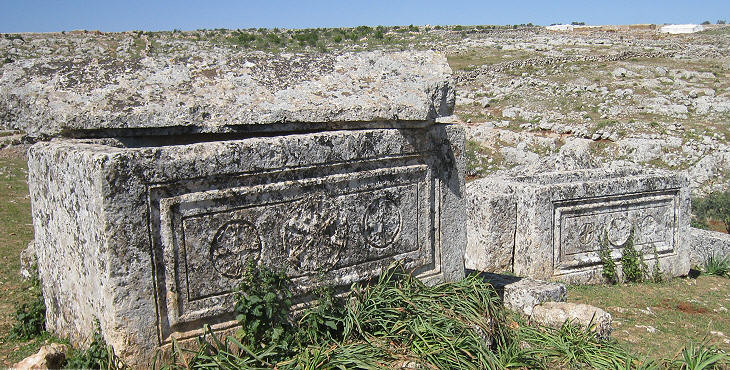 We at length came to Kuph, which is a ruined village of such extent that it looked like the remains of a large town. All the buildings (..) are of a yellow hewn stone, which is easily worked; the walls are built of single stones, and are about eighteen inches thick. They are neither fastened with iron, nor laid in mortar; and in this manner I saw several very beautiful walls at least thirty feet high, which stood true, and were not in the least ruined in such a course of time, being built on a firm rocky foundation ; the stones are worked so smooth that they join very close, and are laid in such a manner as to bind one another. In Kuph the buildings appear like very magnificent palaces; some of them are built round several courts; I was astonished to see such buildings in a place so retired, and in the midst of rocky hills, where there is no view or prospect of any thing delightful; but on taking a nearer view of them, I concluded by whom, and for what purpose they were built. By the manner of architecture, which is not bad, they must have been, of the fourth or fifth century at the lowest. The crosses made over all the doors, are a proof that they are Christian buildings.
Richard Pococke - A Description of the East and Some Other Countries - 1745
Pococke was on his travelling from Hama to Aleppo when he visited this village near Sergilla.