Qalb Lozeh (Almond Heart: almond trees are widely grown in the region) is a village located between Antioch and Aleppo very near the modern border between Turkey and Syria. In 1862 Frenchman Marquis de Vogue reported having seen there a large stone church, which today has been recognized as having set the pattern for the architecture of the region, including St. Simeon's Martyrion. 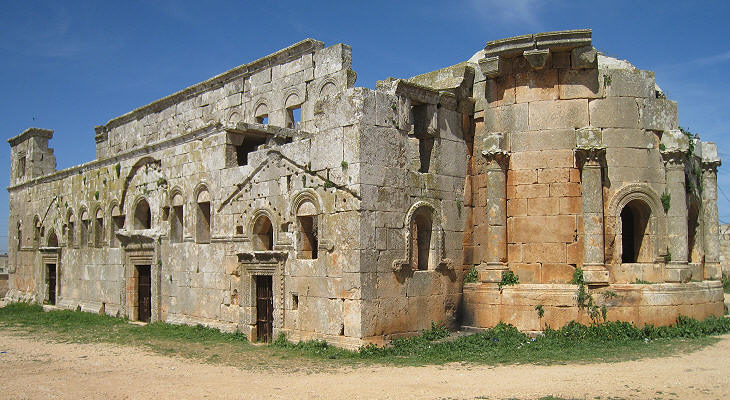 Apse and southern side

The church is now thought to have been built during the lifetime of St. Simeon (who died in 459) or right after his death. Because only a few ancient houses have been identified in the immediate surroundings of the church, the purpose of such an imposing building is not entirely clear; archaeologists believe that: a) it served the population of Qirqbizé, a village located at a distance of just over a mile; b) it was a stop for pilgrims on their way to listen to the teachings of St. Simeon; c) it housed some relics which per se attracted pilgrims.
The structure of the church is almost completely intact and some of its features, such as the apse with engaged (attached) columns, have led art historians to regard it as a forerunner of Romanesque cathedrals. 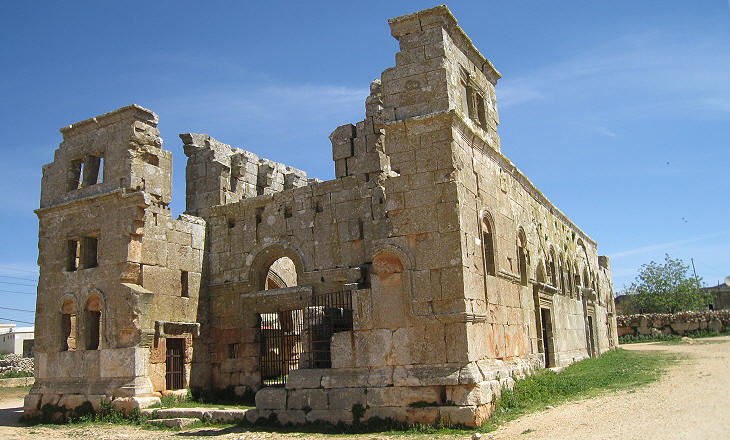 The nave of the church was preceded by a narthex flanked by two square towers: it is a design which can be regarded as a first step towards placing two bell towers at the sides of the entrance. The towers housed steps which gave access to galleries from which believers (perhaps women) could attend ceremonies when the church was full. 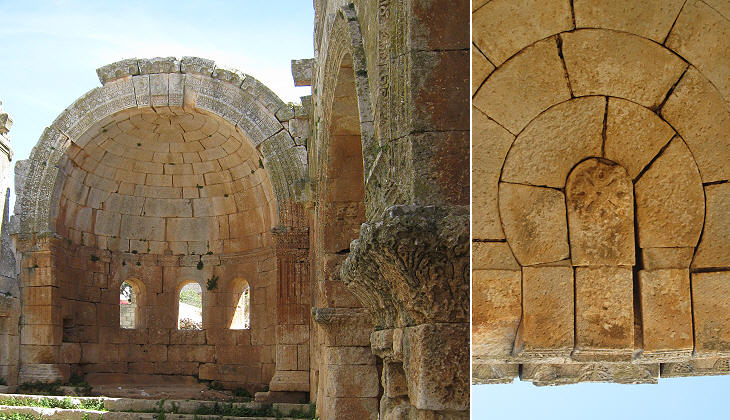 The whole construction is based on carefully cut stones, with no use of bricks or mortar; the Roman construction technique for vaults and domes was based on the use of concrete and on the reduction of the ceiling weight, which was achieved in various ways, including leaving a large opening at the centre of the vault or dome (see the Pantheon of Rome). Instead at Qalb Lozeh the properties of arch-based structures were fully exploited by arranging cut stones so that one single keystone could lock them in a way which time has proved to be very effective. 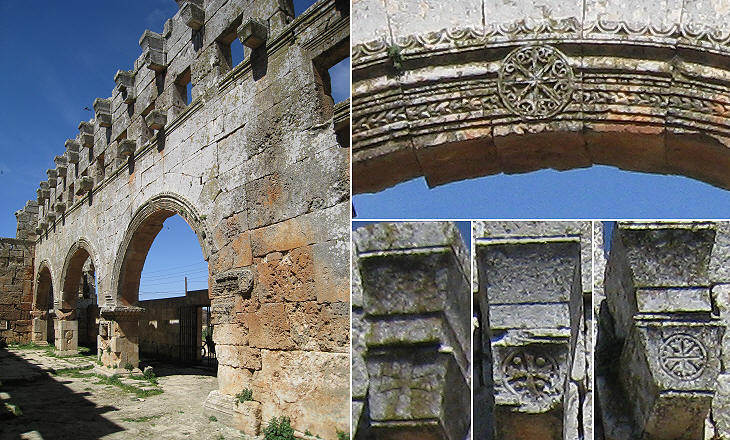 (left) Northern wall; (right) crosses on arches (above) and corbels (below)

The basic layout of the building is that of a Roman basilica, a rectangular hall having at one end an apse, but the hall is divided into three sections by pillars and arches, rather than by a series of columns; the beams which supported a tiled roof have collapsed and in a region scarce of timber they were probably reused elsewhere; art historians however have reconstructed the structure of the roof on the basis of the many corbels which supported it. 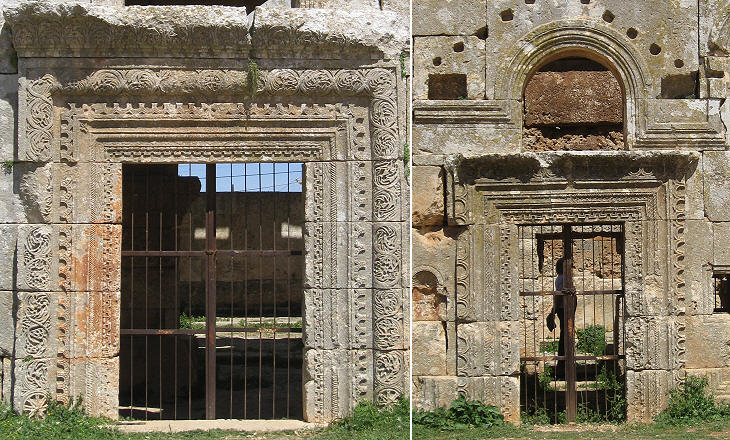 Doors on the southern side

Archaeologists have found evidence proving that at least in part the internal walls of the church were painted; with this proviso it is nevertheless evident that the focus of the decoration was on the exterior of the building; doors in particular were framed by several decorative bands of geometric patterns; an aspect which we usually tend to associate with Islamic art and the prohibition of representing living beings, but which existed prior to the Arab invasion. 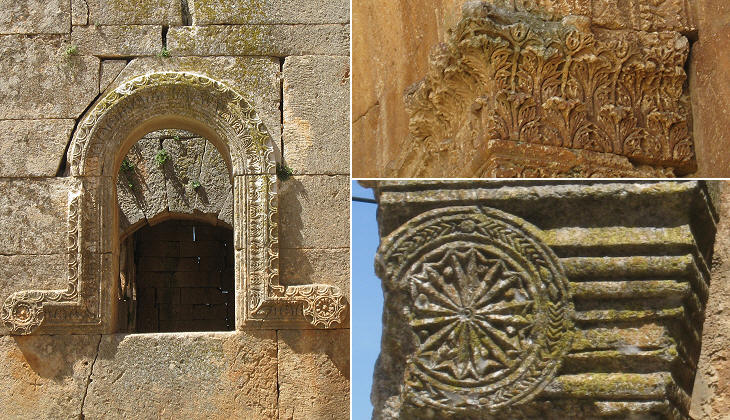 (left) Window on the southern side; (right) capitals

Another key aspect of the construction technique used at Qalb Lozeh is that it allowed the opening of an unprecedented number of windows in the side walls and in the apse; also the windows were decorated with geometric bands. Classic orders in the design of capitals were abandoned to experiment with new solutions; only the Corinthian order continued to be utilized, but with significant changes. 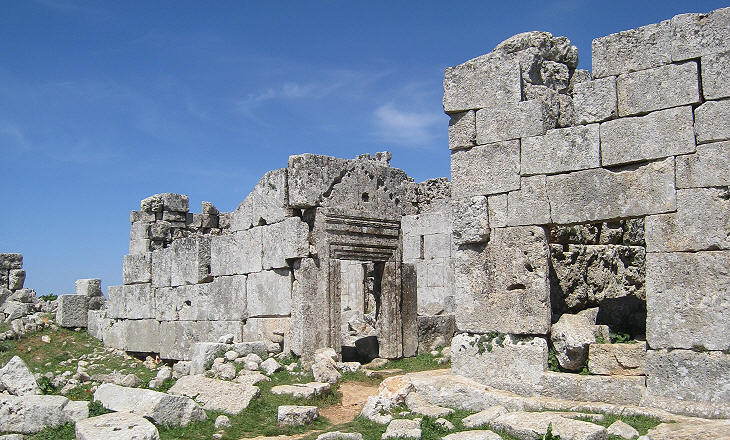 The houses found at Qirqbizé were built before the church of Qalb Lozeh; among them archaeologists have identified a domus ecclesiae, a private house where the Christians met for ceremonies and which in addition to a large hall included other facilities for the community of believers. Domus ecclesiae have been identified in Rome in the foundations of SS. Silvestro e Martino ai Monti, S. Pudenziana and other very old churches. 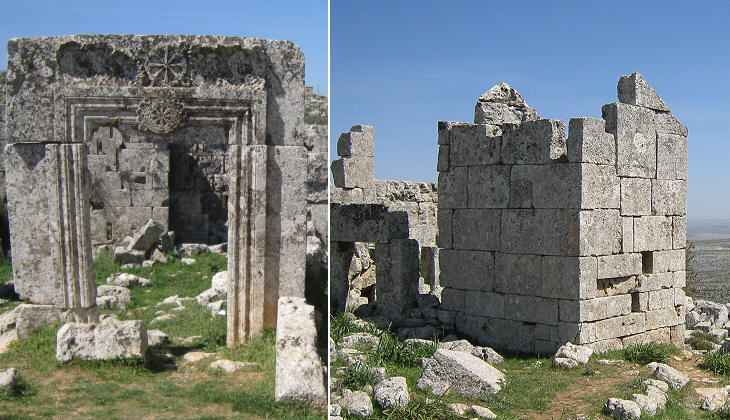 Qirqbizé: (left) decorated lintel; (right) tower of the recluse; the image used as background for this page shows a lintel and a column

Early Christians, based on the teachings of St. John the Evangelist and St. Paul, were convinced that the end of the world, with the punishment of the wicked and the glorification of the righteous, was imminent. This belief led some people to choose to live alone, away from worldly matters, to fully concentrate on their spiritual life and to devote themselves to the praise of God; a well known way of achieving this aim was to live as a hermit in a desert. In this Syrian region some chose to live as a recluse inside what seems to be a tower, but is just a small building without windows and doors and having only some narrow openings for the passage of air, light and some food and water.