- Sanliurfa - page two
(Detail of a relief at Karatepe)

You may wish to see an introductory page to this section with a map or a page on the main monuments of the town first.

Ourfa is built on part of two hills, and in the valley between them, at the south west corner of a fine plain, which appears more beautiful, because all the other parts about it are rocky, or mountainous; the town is about three miles in circumference.
Richard Pococke - A Description of the East and Some Other Countries - 1745 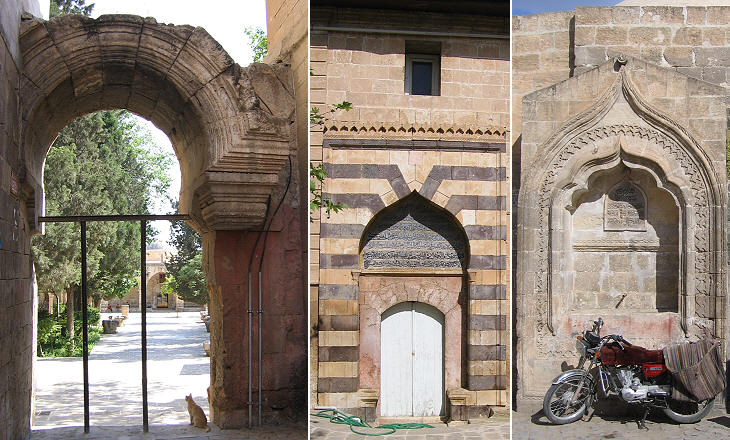 Religious life in Urfa centred around the sites associated with Abraham's life. The rest of the town is relatively scarce of major monuments. Ulu Cami, the main mosque, is a relatively small building of the XIIth century; photos taken in the early XXth century show that it was in a pitiful condition; it retains a piece of an ancient triumphal arch or gate. 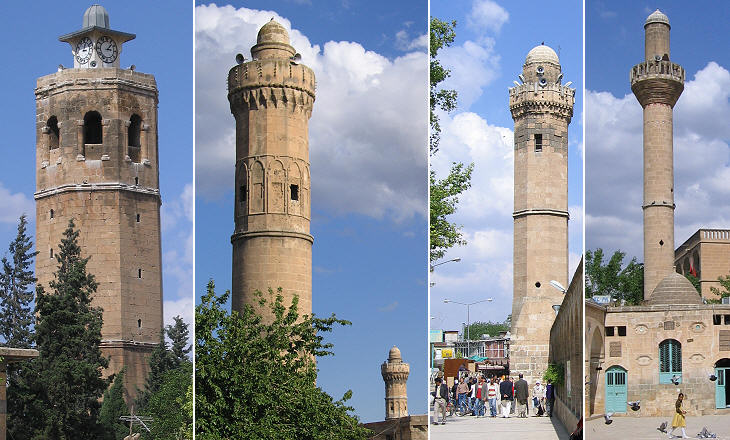 The minaret of Ulu Cami was a bell tower which probably dated back to the period (1098-1146) during which time the town was a small Crusader state; the construction of tall bell towers was not customary in Byzantine architecture, whereas it was typical in Western Europe, where the Crusaders came from. Its octagonal shape influenced the construction of later minarets, although the most recent ones were designed according to classic Ottoman patterns. 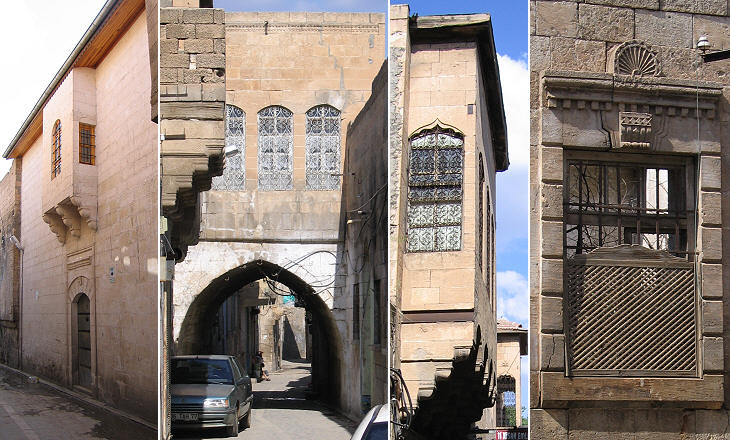 Some parts of the town are tolerably well built, though it is not well laid out. Pococke
Traditional Ottoman houses (you may wish to see those of Safranbolu) had many windows and were built largely of timber; at Urfa the structure of traditional houses revolved around an inner courtyard; high walls protected the privacy of the inhabitants; vaulted passages above the street allowed the members of an enlarged family to move about without going outside. 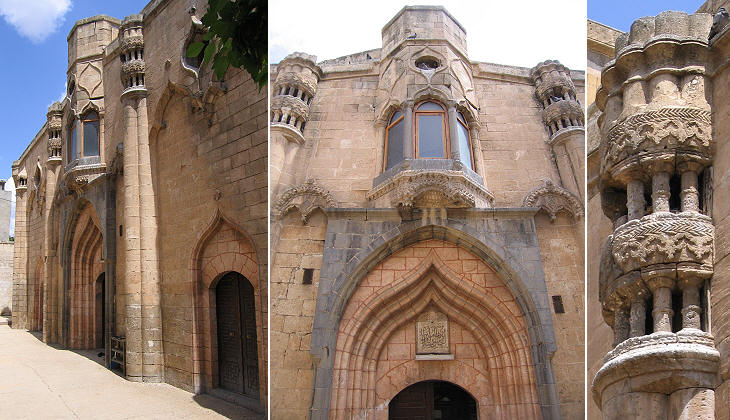 There are a considerable number of Armenian Christians in the city who have two churches, one large one in the city, the other at some distance from it; in the latter they shewed me the tomb of a great saint, whom they call Ibrahim. As Ephraim Syrus was a deacon ol Edessa, it may be concluded that it is the tomb of that father of the church. Pococke
Yeni Firfirli Camii means "new frilled mosque" and its name is a reference to its decoration when it was an Armenian church. Urfa was for centuries home to a large Armenian community, which towards the end of the XIXth century accounted for approximately one fifth of the population. When the sultans lifted the limitations imposed on churches, the Armenians renovated this church and gave it an almost Gothic appearance.
Starting around 1890 the Armenians had to face growing hostility from the Muslims and in 1895 many of them were massacred in Urfa. The events which occurred during and after WWI forced the Armenians who survived to leave the country. The church was turned into a prison and in 1956 into a mosque. 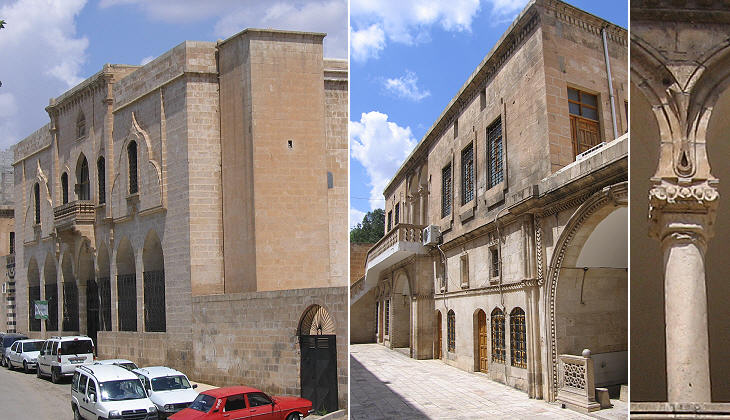 Another large church was renovated in the XIXth century in a style which recalls that of buildings in Rhodes. Its bell tower was truncated and when the church was turned into a mosque it was named after Saladin, the Sultan of Egypt and Syria who in 1187 conquered Jerusalem by defeating the Crusaders. 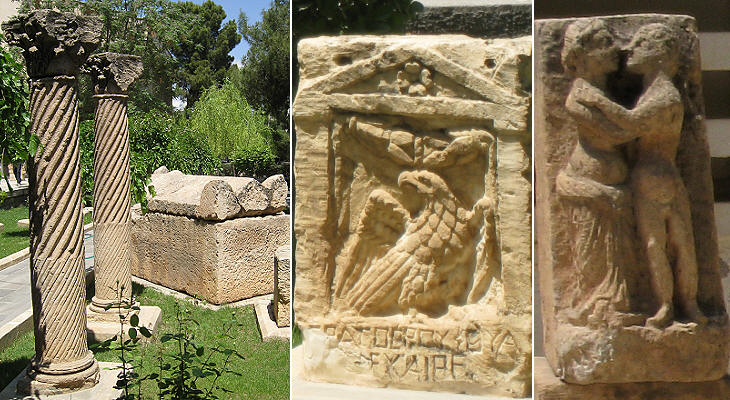 Towards the east end of the city I saw some Corinthian pillars standing which might belong to a temple. Pococke
The Archaeological Museum of Sanliurfa houses several interesting remains of the Roman and Byzantine periods.
It was at Edessa that a Roman emperor was captured and kept in captivity for the rest of his life. In 260 Emperor Valerian was besieged in this town by Shapur I, King of the Sassanids; it seems that during negotiations for a peace settlement Valerian was taken prisoner.
According to Lactantius, an early Christian historian, Shapur inflicted all sorts of humiliations on his prisoner; however Lactantius described the captivity of Valerian in De Mortibus Persecutorum, a book about the horrible deaths of the emperors who persecuted the Christians, so his account could have been arranged to prove his case.
What is certain is that Shapur employed the engineering skills of his Roman prisoners for building Bishapur (Shapur's city), a new town designed following western patterns, where archaeologists have found many interesting reliefs. 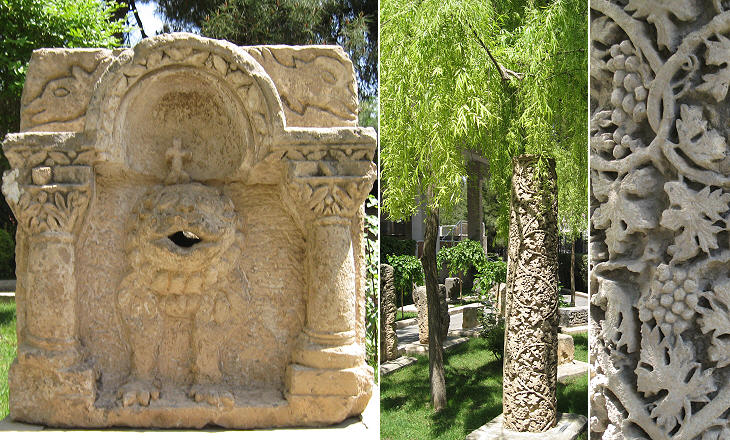