- Ain Dara
(Detail of a relief at Karatepe)

In 1955 the chance discovery of a basalt lion led to the excavation of Tell Ain Dara, a small mound in the valley of the Afrin River in northern Syria. Archaeologists unearthed the decorated platform of a temple which is thought to have been built over several centuries when the region was part of a minor Hittite state. 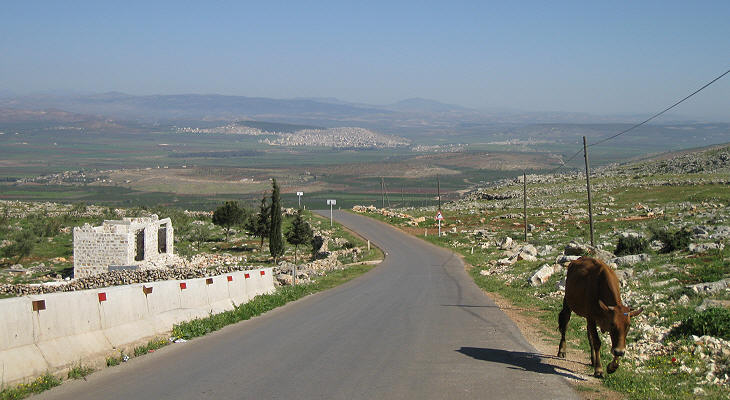 The Afrin River is a tributary of the Orontes River; while the Orontes has a south-north direction (its springs are in Lebanon), the Afrin has a north-south direction (its springs are in the eastern part of the Anatolian tableland); after receiving the Afrin, the Orontes turns westward and before emptying into the Mediterranean Sea it crosses Antioch.
In the past the valley of the Afrin was therefore an important way of communication between the coastal region and the tableland; today borders split the valley into three sections; that nearest to the springs is in Turkey; the central one is in Syria whereas the final one is again in Turkey. 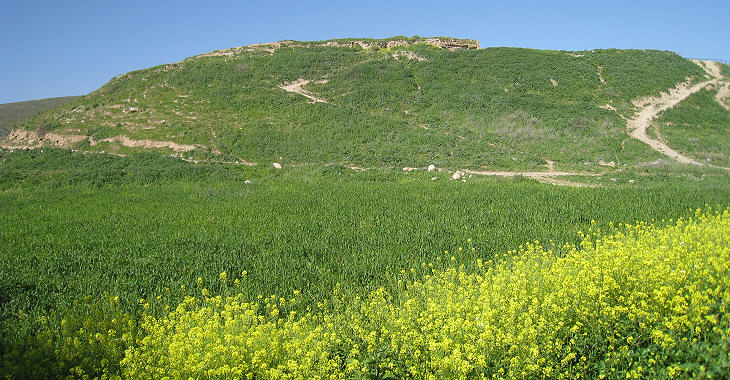 The mound of Ain Dara housed a small settlement in addition to the temple which was located on its eastern end; the great Hittite Empire centred in Hattusa did not exist any longer during the last phase of construction of the temple and some archaeologists use the term Syro-Hittite to indicate that its design and decoration reflect also some other cultures of the region. The Hittite states in today's northern Syria and south-eastern Turkey (see also a page on Karatepe) were overrun in the VIIIth century BC by the Assyrians and the temple was abandoned, although Ain Dara, owing to its commanding position, continued to house a settlement until the Middle Ages. 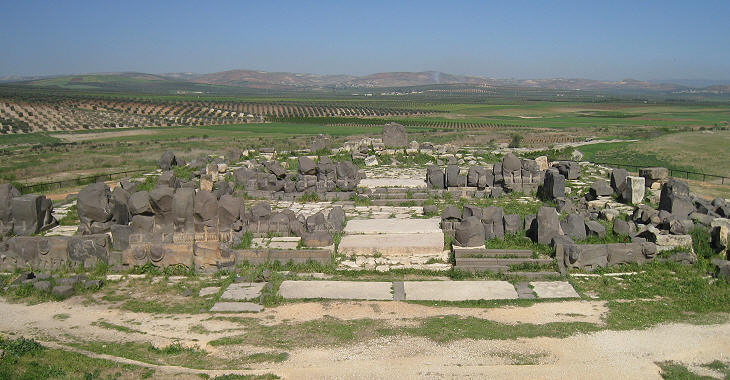 Overall view of the temple

The design and in part the decoration of the temple have attracted the attention of archaeologists who are keen on finding evidence of biblical accounts; according to them Ain Dara shows points in common with the description of Solomon's Temple in Jerusalem.
The temple was preceded by a small porch; steps led to an antechamber and then to the main hall; the shrine of the deity was placed on a platform at the end of the hall. This design is not consistent with that of the temples at Hattusa which had a central courtyard. 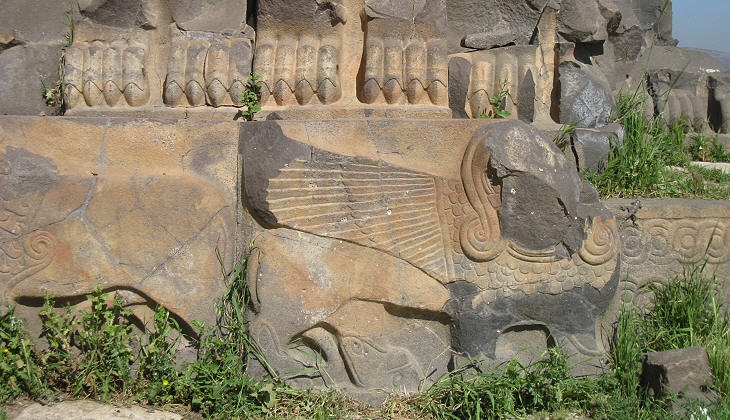 External decoration of the temple

The decoration of the temple was based on a lower frieze showing lions and sphinxes and on a series of creatures above them, all with identical claws; this upper layer was entirely smashed; because basalt is a very hard rock the smashing of the statues must have been a deliberate action; in the lower frieze many of the faces were smashed too, whereas the rest of the reliefs were spared.

(above) Sphinx and lion; (below) a recurring decorative frieze

A relief showing the goddess Ishtar was found inside the temple and this has led to the belief that it was dedicated to her, although it could have been placed there after the Assyrian conquest because Ishtar was a Babylonian/Assyrian deity. 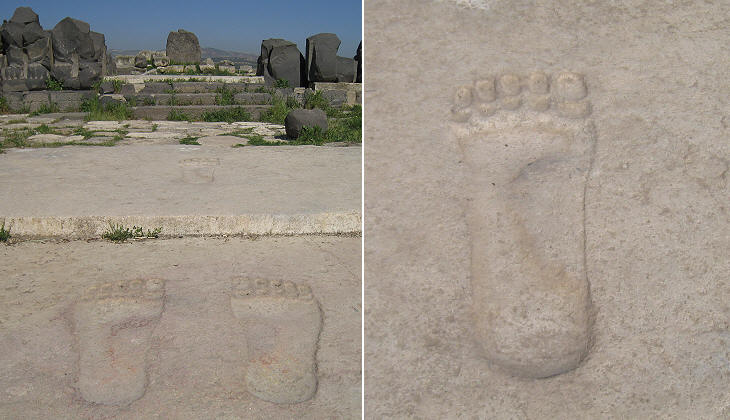 (left) Gigantic footprints on the steps leading to the antechamber; (right) footprint on the second step

The most amazing and unique aspect of the temple decoration is a series of footprints on the steps leading to the antechamber (three footprints) and those leading to the main hall (one footprint). Their size is three times that of a man's foot and they probably were an indication of the passage of a deity. They were carved on slabs of white stone to make them more visible.