- Harran (Carrhae)
(Detail of a relief at Karatepe)

The Tables place Carrae twenty-six miles from Edessa, which is without doubt, the town now called Harran or Heren.
Richard Pococke - A Description of the East and Some Other Countries - 1745
Excavations in the 1950s effectively proved the identification of the ancient town with modern Harran. Many cities and towns of the past have disappeared; in many cases however new towns were built not far away, because basic trade routes and military needs required so. This is not the case with Harran (Roman Carrhae) which after having been an important town for thousands of years was completely abandoned. The length of the walls is about three miles, which indicates that Harran was a relatively large town; they were restored several times; their conservation status varies a lot; in some places one can see well structured walls and openings for ballistas, catapults for hurling large boulders, similar to those in Rome. In other sections they are just a weedy mound. 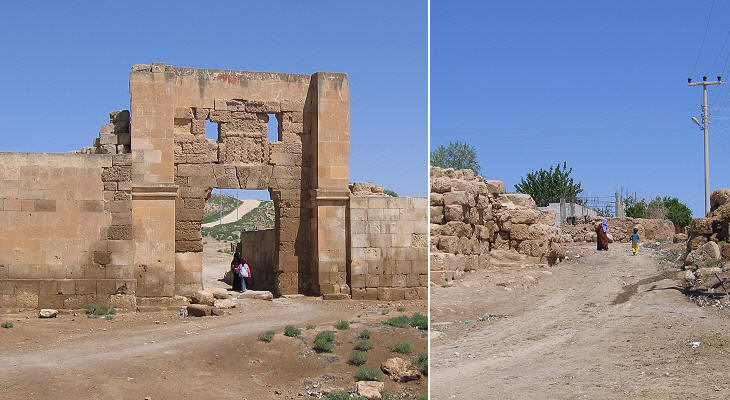 (left) Aleppo Gate; (right) a breach in the walls

The number and the names of the gates go back to the XIIth century when the town was retaken by the Muslims, after having been part of the County of Edessa, a Crusader state. The main gate was that leading to Aleppo which at the time was the most important city of the region. Today the other gates are just breaches in the walls.

A very tall square minaret stands at the centre of the old town; it is the main memory of Harran most illustrious period, when the Umayyad Caliph Marwan II established his capital in this town. He built a large mosque and a tall minaret which was also an astronomical observatory. Unfortunately Marwan II's reign lasted only six years (744-750) because he was defeated by the Abbasids who in 762 relocated the capital of the Caliphate to Baghdad. 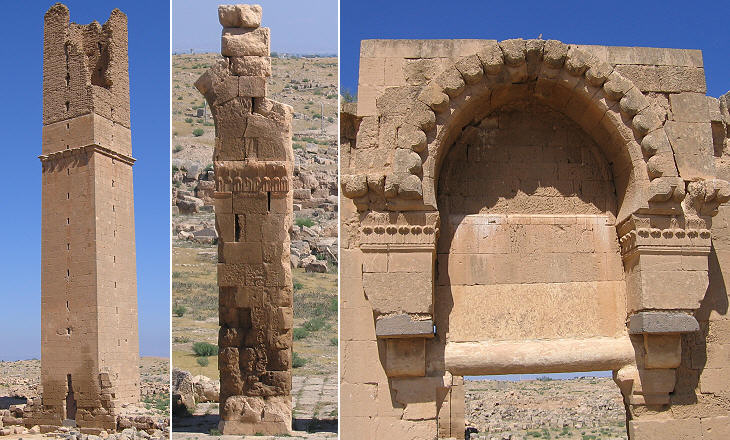 Ulu Cami: the minaret (see a similar one at Silvan) and other remains

The Abbasid Caliphate knew an initial period of growth and great scientific and cultural development, but the Caliphs of Baghdad soon lost direct control over most of their nominal empire which stretched from Spain to Central Asia. Towards the end of the Xth century Harran was the capital of a local emirate which was ruled by the Numayrids. The extent of their possessions was rather limited and probably the population of Harran was concentrated in the half of the town located south of Ulu Cami. 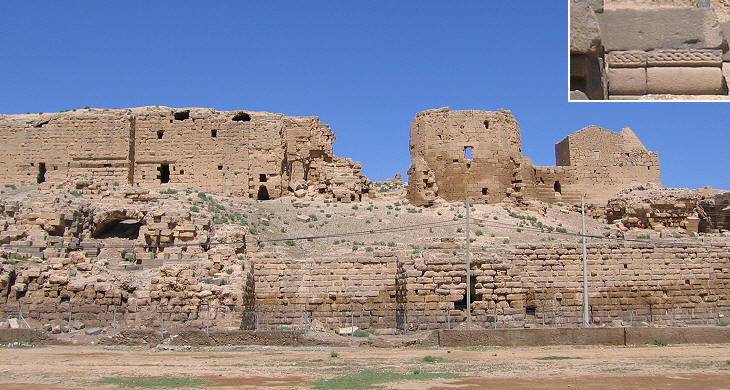 The Numayrids built a fortress at the south-eastern corner of Harran, on the assumed site of an ancient temple to the Moon. According to Roman historian Ammianus Marcellinus in 363 Emperor Julian offered sacrifice to the Moon god of Harran; later Christian writers found a connection between this impiety and the death of the Emperor which occurred a few months later.
This place is remarkable for the entire defeat of Crassus and the Roman army by Surena, the Parthian general. Pococke
Harran is associated with two dramatic events in Roman history: a) in May 53 BC Marcus Licinius Crassus was defeated by the Parthians and lost his life; b) in 217 AD, while leading his army in another war against the Parthians, Emperor Caracalla was assassinated by his own guards. 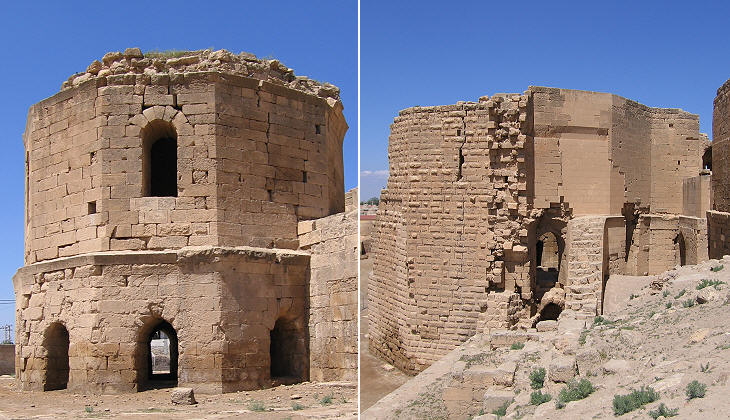 The presence of a few decorated stones on the walls of the fortress seem to indicate that the site of the temple to Moon was modified by Caliph Marwan II and turned into a palace, before the construction of the fortress. Numayrid rule in Harran ended in 1081; later on the town belonged to the rulers of Aleppo who in part rebuilt the fortress in 1149. 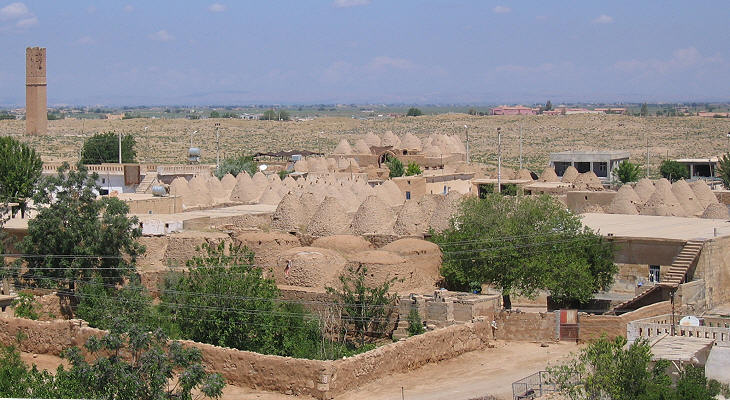 The Caliphate is a Muslim form of government which combines civil and religious rule; the Caliph has the title of Amir al Mu'minim, Commander of the Believers. From a historical point of view the Caliphate came to an end in 1258 when Hulagu Khan, a Mongol commander, conquered Baghdad and executed Al-Mustasim, the last Abbasid Caliph. Although later on Mameluke and Ottoman sultans claimed to be caliphs, the unification of all Muslims in one government structure never occurred again.
In Harran the Mongol invasion was preceded by that of Khwarezmian warriors (see a page on Khiva, a town in Khorezm) who were fleeing the Mongols. These fighters eventually arrived in 1259 and Hulagu Khan greatly damaged the fortress before it surrendered. A few years later in 1271 he decided to relocate the inhabitants of Harran to Mardin and Mosul.
The fortress housed a small garrison which was maintained in the following centuries by the Mamelukes and the Ottomans, but the town was never rebuilt. 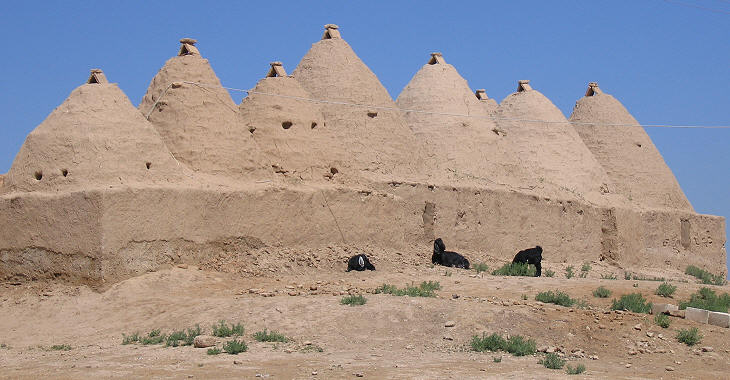 The few farmers who lived in a village near the fortress, owing to the lack of timber beams and being unable to use more elaborate masonry techniques such as arches and vaults, resurrected an ancient pattern of corbelled houses. 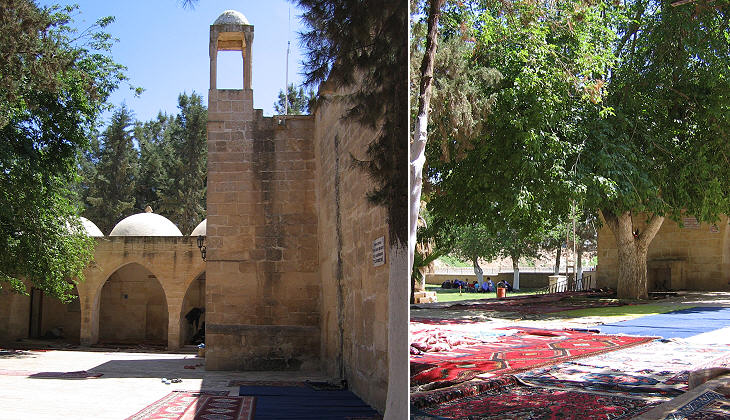 This mausoleum and its adjoining mosque are located outside the walls; they are surrounded by trees and grass and they constitute a refreshing sight for those who have spent hours in the abandoned town. Today, owing to the irrigation facilities built by Turkish authorities in recent years, Harran has an ample supply of water and the fields around the old town are properly farmed.
The mausoleum was built in ca. 1195 for a saint who lived in Harran and who is regarded as a Gwahs, the highest rank of religious leaders. Because the interior of the mosque is very small, carpets are placed in a terrace outside it to allow people to pray. 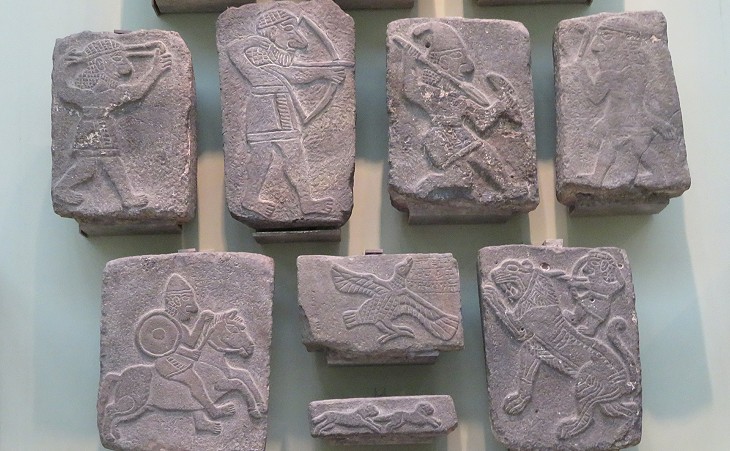