- Lampron Castle
(Detail of a relief at Karatepe) 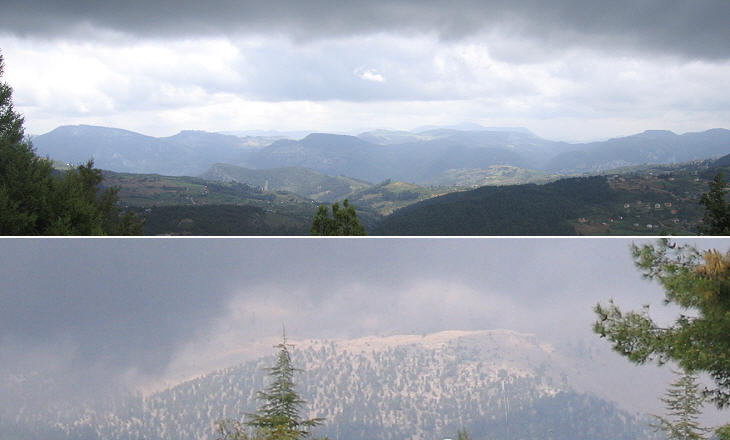 Views of the Taurus Mountains from Lampron Castle in May. This range separates the central Anatolian tableland from Cilicia

The Cilician Gates, or Golek Boghaz. November 20 th.1836. We had had sharp frosts both nights that we spent in the Golek Boghaz, and we started amid ice and hoar frost, down to an extremely narrow ravine, which constitutes what is, perhaps, most formidable in the whole length of the pass, perpendicular cliffs rising to a great height on both sides, and the little interval that exists between, occupied by a mountain torrent, itself and the pathway being also obstructed by huge fallen masses of rock.
William F. Ainsworth - Travels and Researches in Asia Minor, Mesopotamia, Chaldea, and Armenia - 1842
In the past a narrow gorge known as the Cilician Gates was the only pass which connected Cilicia with the tableland and this only after the melting of snow. The control of the valleys to the south of the Cilician Gates was therefore crucial to prevent Cilicia from being invaded. 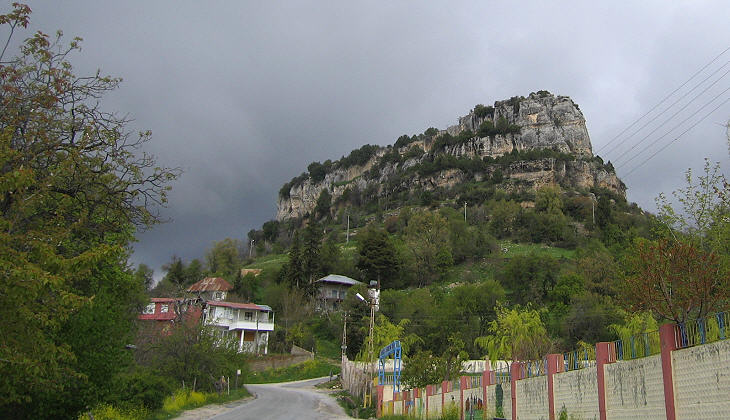 Below this pass vegetation becomes very luxuriant, and affords abundant evidence of a change in climate on the Cilician side of Taurus. The forests consist almost exclusively of pines of fine growth, plane-trees grow by the water's edge, while the bottom of the valley is filled with a dense covering of evergreen oak, bay, laurel, quince, wild fig, wild vine, and cedar. (..) On the right hand or south side of this pass are two bold rocky summits, towering, bare and precipitous, over the surrounding forest: the most western of these bears the ruins of a castle, with crumbling walls and round towers, said to be Genoese. Ainsworth
In the XIth century Armenia was invaded by Turkish tribes which moved eastwards and after having defeated the Byzantines at Manzikert in 1071 settled in the tableland; there they founded the Seljuk Sultanate of Rum and smaller Muslim emirates.
Several Armenian nakharars crossed into Cilicia, where some colonies of Armenians had already settled at the end of the Xth century. Nakharar means first born and it designated the members of the Armenian noble families. Cilicia was a Byzantine possession, but the emperors of Constantinople were unable to effectively control it. 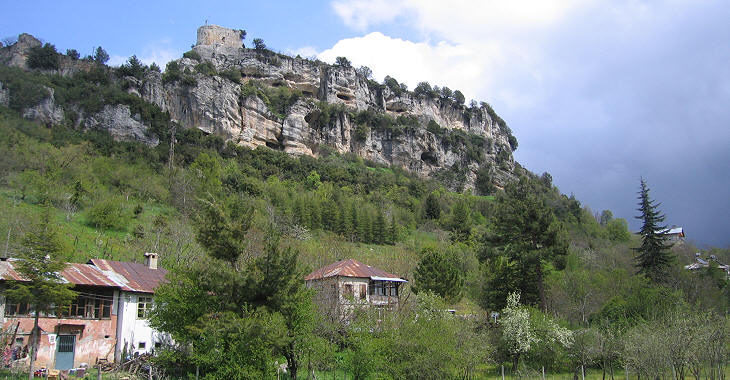 Oshin, an Armenian nakharar, with members of his family and other chevaliers took control of the valleys between the Cilician Gates and Tarsus and strengthened an existing fortified site on an isolated rock which commanded a view over a large section of the Taurus range. He was the founder of the House of Lampron, after the name he gave to this castle. 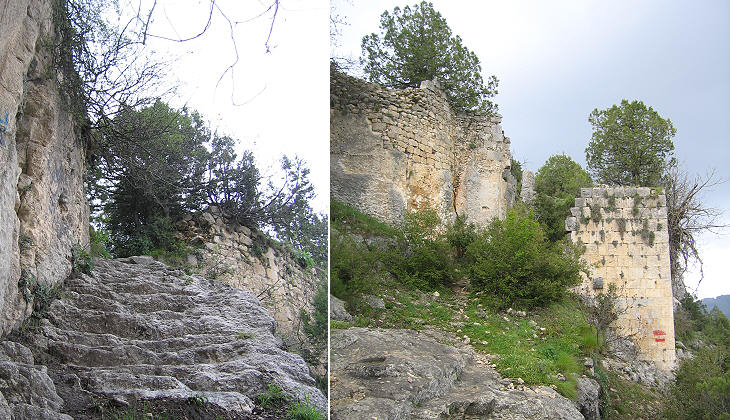 At the time Lampron Castle was built, the need for security was paramount; the access to the castle was possible only through steep steps which were cut into the rock; the narrow passage was controlled from well built walls and towers.
In 1137-1138 Emperor John Comnenus II restored Byzantine sovereignty over Cilicia, but the Armenian warlords gradually detached themselves from it with the help of the Seljuks and of the western leaders of the Third Crusade (1189-1192); in 1199 in Tarsus Levon (Leo) I was crowned King of Armenia by Cardinal Conrad of Wittelsbach. He set his capital in the town of Sis. 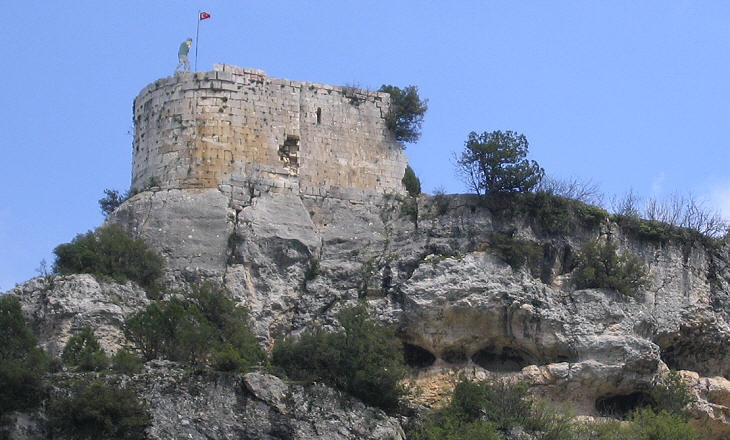 The House of Lampron is also known as the Hethumid dynasty, after Hethum I, a descendant of Oshin who became king in 1226 by marrying Zabel (Isabel), daughter of Levon I (who had no sons). The contact with the crusaders introduced many western elements into Armenian society: a structure of government modelled after the feudal system, allegiance to the Pope and modifications to the Armenian alphabet to adapt it to words of French origin.

Five vaulted halls at the very top of the rock were the residence of the lords of Lampron. The halls were not decorated with reliefs or architectural elements, but they were strongly built and the stones were nicely aligned. 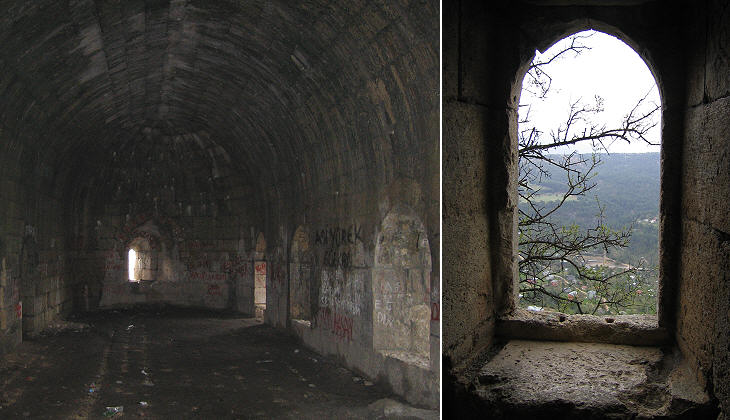 Those who enjoy reading gothic novels will not be disappointed by a visit to Lampron Castle, although eventually they will discover that noises coming from the interior of the halls are not due to ghosts, but to a family of squirrels. 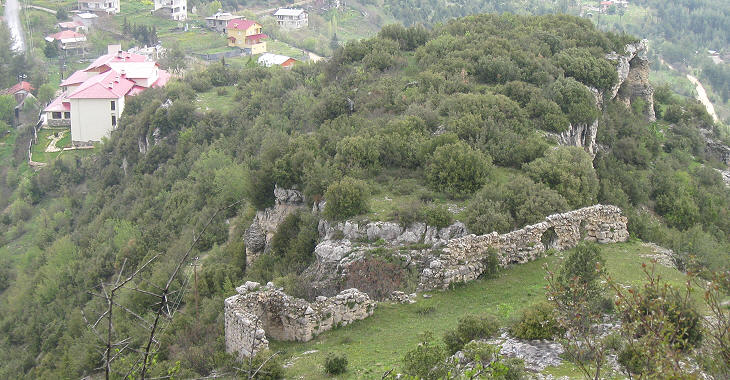 View over the lower castle

The Hethumid dynasty ruled over Cilicia (which at the time was called Lesser Armenia) until 1341, when Leo VI was assassinated by his barons. He was replaced by Guy of Lusignan, a relative of the King of Cyprus. The days of the Armenian kingdom came to an end in 1375 when the Mamelukes took full control of Cilicia, including Lampron. 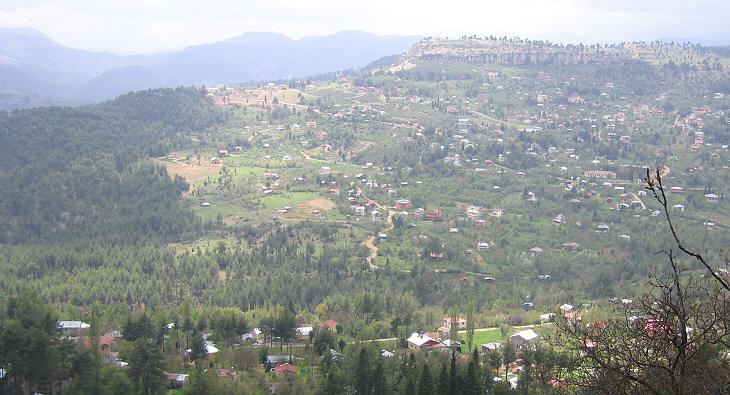 Today Lampron Castle is located in the municipality of Camliyayla; it is not structured as a small town, but it is dispersed into many small settlements; in summer its population grows enormously because of the arrival of many people from Tarsus and Adana who seek refuge from the extreme heat of the plain.