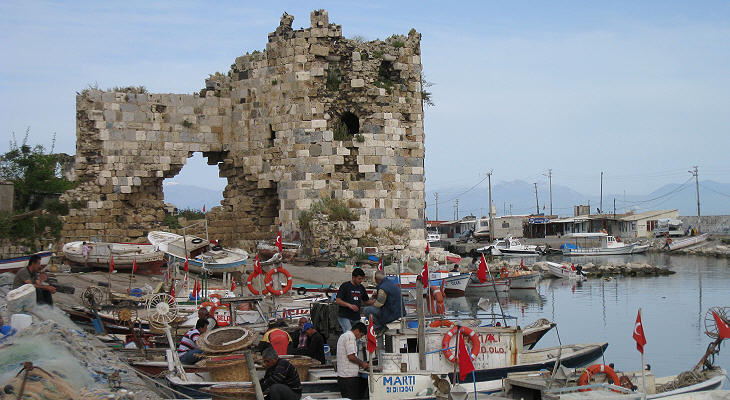 On the extreme point of the bay is Ayas Kalassy, a small village comprised within the walls of a half-antient castle. Fortune did not permit me to reach this castle; but some of the officers, by whom it was visited, observed there the shattered remains of a port and artificial pier; probably the antient Aegeae, of which the present name Ayas appears to be a corruption.
Francis Beaufort, Captain of HMS Frederikssteen, a frigate of 32 guns: Karamania; or a brief description of the South Coast of Asia Minor, and of the Remains of Antiquity collected during a survey of that coast, under the orders of the Lords Commissioners of the Admiralty, in the years 1811 & 1812 - Published in 1817
In 1291 Acre, a port in northern Palestine, fell into the hands of the Mameluke Sultan of Egypt: it was the last remnant of the Christian Kingdom of Jerusalem and the main base of the Venetian trade with the Near East: in that same year the Mamelukes occupied Tripoli and Tyre, two ports along the coast of today's Lebanon, where the Genoese had trading posts. Pope Boniface VIII issued an interdict forbidding all Christians from trading with the Mamelukes. At this point Laiazzo, which belonged to the Kingdom of Lesser Armenia, a Christian state, became the only port in the Eastern Mediterranean which Genoa and Venice could use as a base for their trade in the region without incurring in the Pope's wrath. 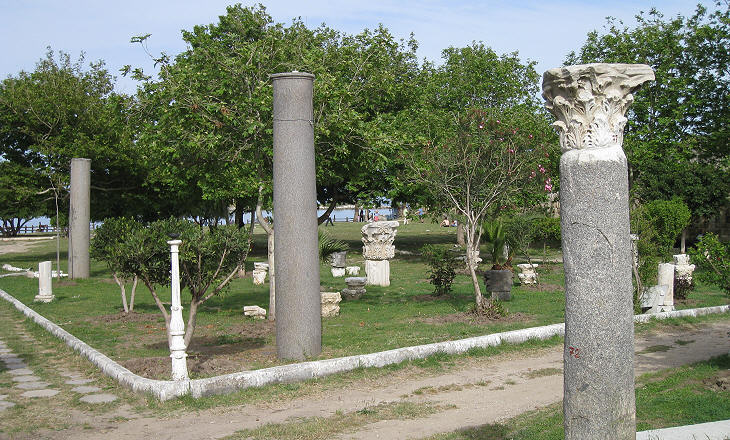 No ruins of any consequence were discovered in the neighbourhood; but some vestiges of antient buildings: were seen, and many small fragments were scattered about the plain. Beaufort
Laiazzo was known in antiquity as Aegea; it was not a major port of the region, this being Tarsus, yet at least in the first and second centuries AD it must have enjoyed a period of development; its monuments were decorated with columns of granite from Egypt and white marble from Greece. 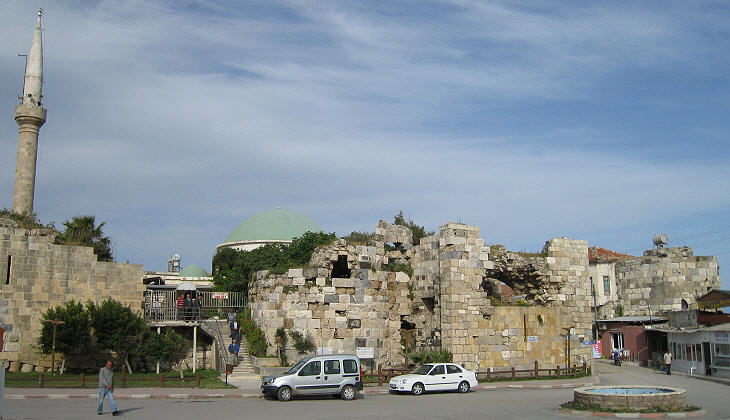 View of the land castle

(The Armenians) have a city upon the sea, which is called LAYAS, at which there is a great trade. For you must know that all the spicery, and the cloths of silk and gold, and the other valuable wares that come from the interior, are brought to that city. And the merchants of Venice and Genoa, and other countries, come thither to sell their goods, and to buy what they lack. And whatsoever persons would travel to the interior (of the East), merchants or others, they take their way by this city of Layas.
The Travels of Marco Polo - translated by Henry Yule
Laiazzo, as the Italians called it, started to acquire importance after 1250, before the fall of Acre, when the Mongols occupied Upper Mesopotamia and the whole of Persia; they opened a land trading route between India and the Mediterranean Sea: from India spice and in particular pepper, were shipped to Ormuz, a port on the Persian Gulf and from there through Persia and Upper Mesopotamia they reached Laiazzo; this route was an alternative to that through the Red Sea and Alexandria, which was controlled by the Mamelukes.
In addition Laiazzo was a starting point for European merchants interested in developing trade with Samarkand and Bukhara in Central Asia. It is thought that in 1271 Marco Polo started his second journey to China from Laiazzo (this explains why local tourist authorities claim that Laiazzo was "Marko Polo Iskelesi", see the image used as background for this page). 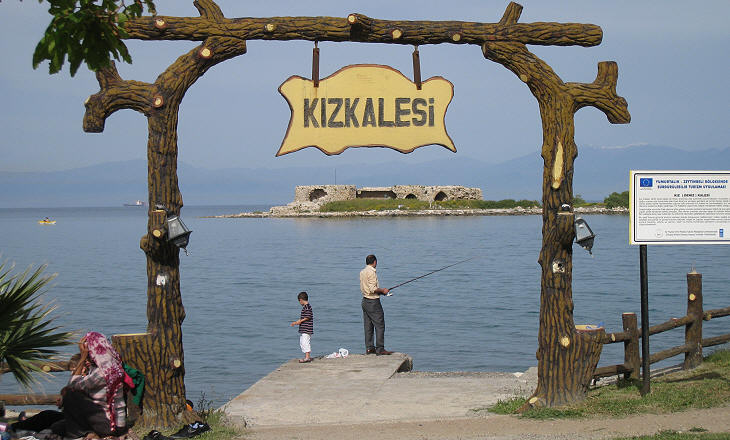 View of the sea castle

A narrow arm of the sea is called Ayas bay. This long estuary contained the greatest number of fish and fowl that I ever saw collected together: every part of its unfrequented beach was occupied by companies of pelicans, swans, geese, ducks, and gulls; and myriads of fish leaped out of the water when roused from their muddy bed, by the boat's, keel, as it dragged along the bottom. There was also an abundance of very fine turtles. Beaufort
Korykos was an important fortress built by the local Armenian barons on the coast to the west of Tarsus; in addition to a land fortress they fortified a small islet, which according to a legend is called Kizkalesi (the maid's island). Today this second name has prevailed on the old one (Korykos) and the town is known as Kizkalesi: it has become an important summer resort, which is chosen by many German tourists.
Yumurtalik (today's Laiazzo) is no longer a port, but it has a fine beach which could attract many holidaymakers, so local authorities thought that naming Kizkalesi their own fortified islet would help the town's development.

The north shore of Ayas bay is a level plain of firm soil, from ten to twenty feet above the sea: it was covered with coarse grass, intermixed with a few patches of corn. Beaufort
In 1295 a Venetian fleet raided some trading bases the Genoese had on Cyprus; when the news reached Galata, the Genoese merchants of that settlement moved with their ships and mercenary troops towards the enemy; the battle was fought near the islet of Laiazzo and it ended in disaster for the Venetians; it is thought by many historians that it was on this occasion that Marco Polo was taken prisoner: during his imprisonment he dictated the account of his travels, for which he is known. In 1302 Venice resumed trading relations with the Mamelukes and for the following twenty years Venetian convoys sailed for Alexandria and other ports controlled by them. In 1322 the Pope renewed his interdict and Venice preferred to obey; trade with the Mamelukes did not stop however because they continued to sell cotton, spices and pepper to the Venetians; they did it at Laiazzo; custom duties paid to the Armenian kings were used by the latter to fulfil obligations established in peace treaties with the Mamelukes, who in turn used this money to repay interests on loans they received from the Venetians. 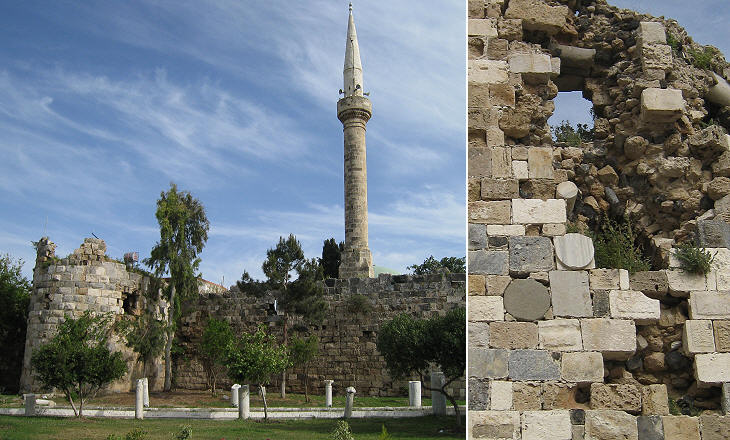 A little to the westward there is a round tower, with an Arabic inscription over the door; and several of the stones in this tower are of a hard black lava, resembling the Sicilian millstones which are procured at Mount Etna. Beaufort
By 1340 the importance of Laiazzo started to decline: one nail drives out another, the Mamelukes were no longer seen as the most dangerous menace for Christianity; the Turkish tribes which had invaded Anatolia in the XIth century gradually conquered its coasts and from there they threatened the maritime routes between Europe and the Levant; the sultans of Karaman conquered Alanya, Cape Anamur and Silifke; in 1354 the Ottomans established their rule on some towns on the European side of the Sea of Marmara; most of the coast on the Aegean and Black Seas were controlled by minor Turkish emirates.
In 1344 a sort of crusade promoted by the pope allowed the Crusaders of St. John to conquer Smyrna. The Venetians helped by sending some ships and in return the pope lifted the ban on trade with the Mamelukes; the role of Laiazzo in circumventing the interdict was gone forever.