- Sanliurfa
(Detail of a relief at Karatepe)

We arrived at Ourfa, where I was recommended to a Turk, and also to a Christian, who was secretary to the pasha; he pressed me to go home with him, where I was handsomely entertained on the terrace of his house, and took up my lodging with him. This place is called Ourfa by the Arabs, but the Turks give it the name of Roiha or Rouha. It is generally agreed to be the antient city of Edessa.
Richard Pococke - A Description of the East and Some Other Countries - 1745
In 1984 the Turkish Parliament awarded the title of Sanli (glorious) to the town of Urfa , for the behaviour of its inhabitants during the Turkish War of Independence. Similar recognitions had already been granted to Gaziantep (formerly Antep) and Kahramanmaras (formerly Maras). 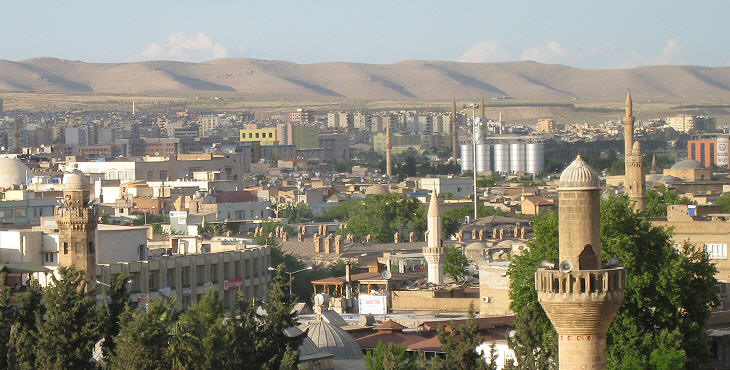 View of the countryside from the citadel

From the castle there is a very delightful prospect: of the city, the water, the gardens, and the fine plain to the north, which make it in every respect a very charming place. (..) This place is the residence of a pasha, who not only commands the greatest part, if not all Mesopotamia, but also a considerable tract of country to the west of it as far as Antab: There is a great trade in this place, as it is the only town in all these parts for a considerable distance, and as it is the great thoroughfare into Persia (..) They prepare Turky leather here, especially the yellow sort, for which they were formerly famous. Pococke
Sanliurfa is located in what today appears to be a very arid region; however in the past it is likely that the barren slopes of the hills which surround the town were covered with some vegetation, if not with woods.
The recent irrigation projects developed by Turkish authorities have already allowed farming in the plain and they will be followed by reforestation of the hills. 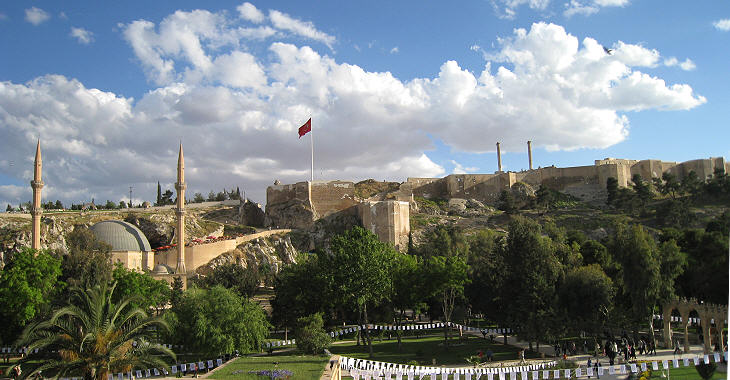 The citadel and below it the gardens of Golbasi

Many learned men, and the Jews universally are of opinion, that it is Ur of the Chaldees. The latter say, that this place is called in scripture Ourcasdin, that is, the fire of Chaldaea, out of which, they say, God brought Abraham; and on this account the Talmudists affirm, that Abraham was here cast into the fire, and was miraculously delivered. This place seems to have retained its antient name, as many others have done; Edessa being the name given it by the Greeks. Pococke
The earliest days of the town are set in the XIIth century BC when a rock bordering on a steep cliff was fortified and housed a small settlement. The actual foundation of Urfa is attributed to Seleucus I Nicator, a general of Alexander the Great, who after the death of his leader established a personal (Seleucid) empire over most of western Asia. He named the town Edessa, after the town by the same name in Macedonia, the country he and Alexander came from. 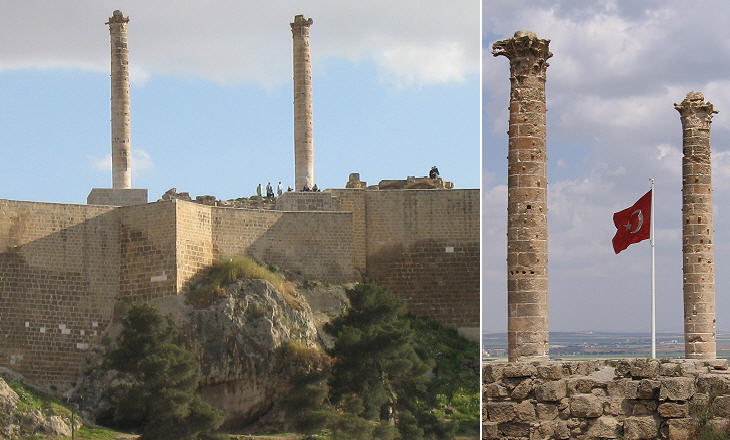 There is nothing remarkable in the castle, except two very lofty Corinthian pillars with their bases, the capitals of which are fine; the columns consist of twenty-six stones, each about one foot six inches thick; they are probably the remains of a portico belonging to some large temple. There is a tradition that the throne of Nimrod stood on these pillars; it is certain however, that Tamerlane erected some trophies on them. Pococke
Today the citadel is strictly associated with a Muslim tradition which identifies Urfa with Ur, Abraham's birthplace. Two gigantic Corinthian columns stand on the cliff; they are called Nimrod's throne, because according to the Muslim tradition, the palace of King Nimrod, the biblical founder of Babylon, was located in the citadel.
The columns bear inscriptions in Syriac which lead to believe they were part of a Christian church; Edessa was for a century the capital of Osroene, a small buffer state between the Roman and the Parthian Empire. It embraced Christianity as early as 201: the local church used Aramaic/Syriac for its ceremonies; a council (not included in the list of ecumenical councils) was held in Edessa in 197. 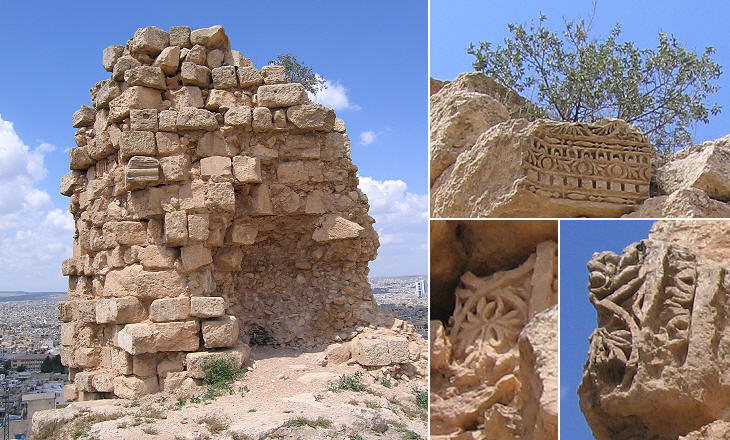 Edessa continued to be disputed between two empires (Roman/Byzantine and Parthian/Sassanid) until the VIIth century when it was occupied by the Arabs, who were welcomed by the locals who resented the conflicts among different interpretations of Christianity. The Arabs called the town Al-Ruha, later named in Turkish Urfa. It was occupied again by the Byzantines in 1030, but their control of the region was weak; in 1098 the Armenians living in the town welcomed Baldwin of Boulogne, a leader of the First Crusade who founded a state known as the County of Edessa. Cuts made through the rock around the citadel

The castle is situated on the south side of the city, at the beginning of a chain of hills which run southward: The ascent is very steep, and there is a deep fossee cut into the rock on three sides of it; the castle is about half a mile in circumference. Pococke
The Crusaders strengthened the fortifications of the citadel; its southern side was deeply dug in order to isolate it completely.
The County of Edessa lasted for just fifty years: in 1146 the town fell to the atabegs of Aleppo; this event led to calling the Second Crusade, which ended in disaster and paved the way for the fall of Jerusalem in 1187. 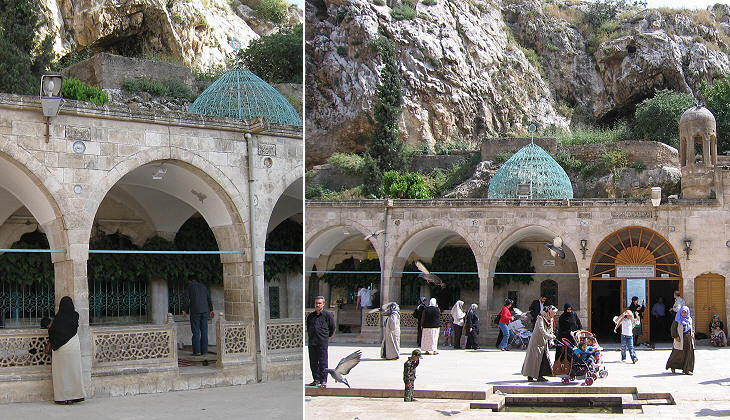 There are a great number of sepulchral grots cut in them for a considerable way, which are a proof that this was a very populous city in antient times. Pococke
Dergah is a prayer place and the square in front of the cave which is said to be the birthplace of Abraham is always full of believers. The Babylonian King Nimrod had a dream which announced the birth of a child who would be greater than himself. He ordered all babies and pregnant women to be killed. Abraham's mother hid in this cave where she delivered a baby who was suckled by a deer. Abraham spent his first ten years in the cave. 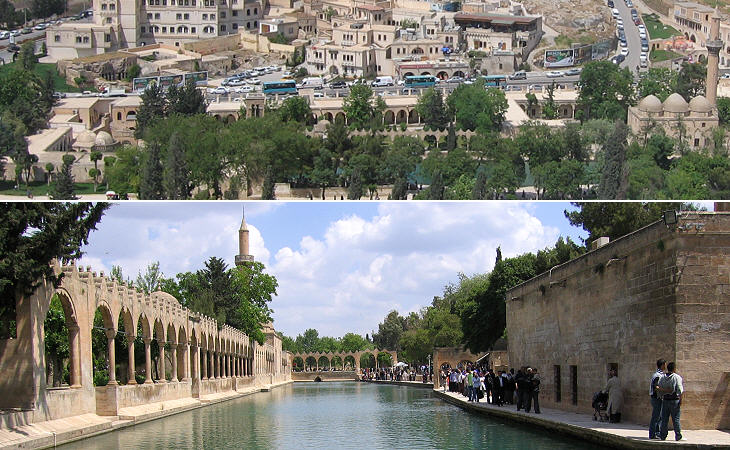 (above) Golbasi seen from the citadel; (below) Balikli Gol (Fish Lake)

They have some story, that Abraham came here after he would have sacrificed his son, and the spring rose on his coming to this place. Pococke
Abraham hated polytheism and destroyed idols; for this he was taken to Nimrod who sentenced him to death; a fire was lit on the edge of the citadel, but the soldiers were unable to bring Abraham there. Nimrod ordered that he should be thrown over the cliff, but God created a spring which broke Abraham's fall.
Golbasi (by the lakeside) is the name given to a complex of mosques, medreses and gardens surrounding sacred pools, the largest one being Balikli Gol. 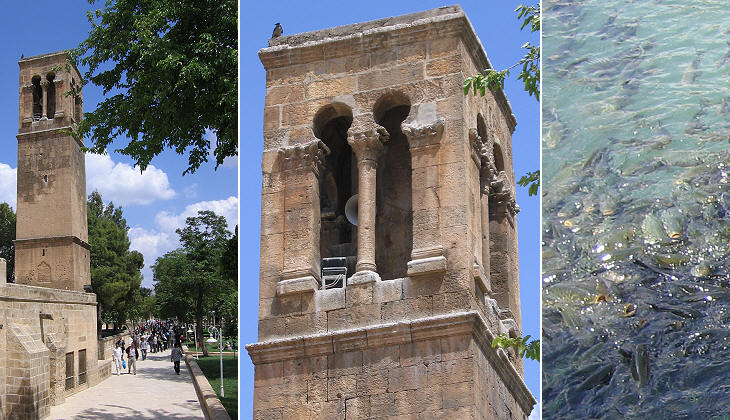 The great beauty of the town consists in some fine springs that rise very plentifully between two hills, and at the very walls of the city: One is confined so as to form a fine oblong square bason of water, is very dear, and full of fish, which swim about in shoals, the Mahometans not permitting any of them to be caught. Pococke
The cinders of the fire fell into the spring and they were turned into carps; these are regarded as being holy, certainly they are very voracious.
After 1146 the new Muslim rulers started emphasizing the biblical heritage of Urfa. It was a way of bringing together the various religious communities of the town (several Christian churches, Sunni and Shia Muslims and Jews).
The 1211 minaret of Halil-ur Rahman Camii has the shape of a bell tower; the mosque was built on a previous church and either the minaret is the actual bell tower of that church or it was built following the same pattern. 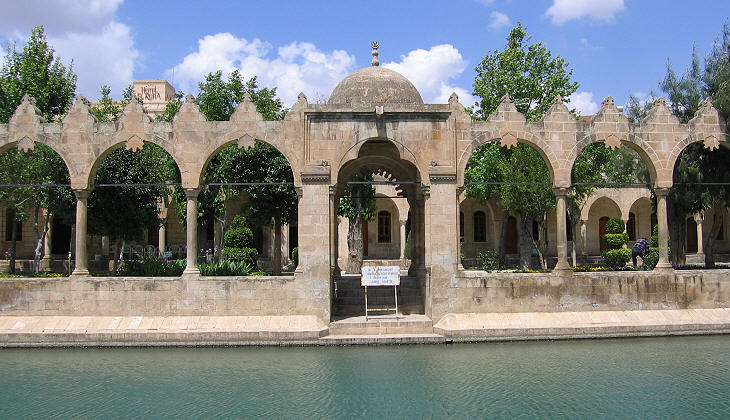 There is a walk on the south side of it, and on the north a very beautiful mosque, and an open colonade between the court that belongs to it, and the water; One part of the mosque is esteemed very holy, and it would be exceedingly difficult for any Christian to obtain leave to go into it. Pococke
In the XIIIth century the possession of the region was disputed between Mongols and Mamelukes; the latter eventually controlled the region until 1516 when they were defeated by Ottoman Sultan Selim I. Urfa however was for more than a century in the hands of local rulers. The town was not formally annexed to the Ottoman Empire until 1637. 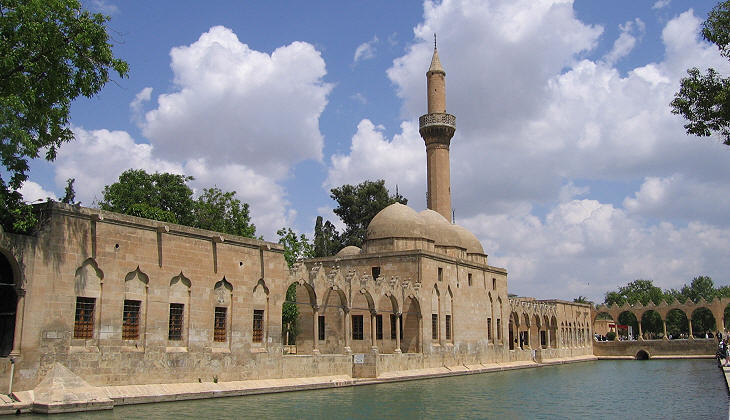 Rizvan Ahmet Pacha, an Ottoman governor of the town, built in 1716 a mosque and a medrese on the northern side of Balikli Gol: they constitute a fine example of light Ottoman architecture. 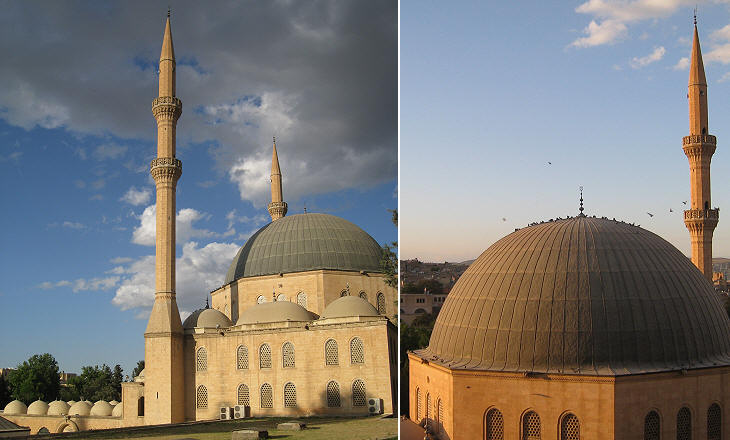 In 1986 a large mosque was built near Abraham's cave; its slender minarets give a more Ottoman appearance to the Golbasi complex, but its size is definitely excessive (see the second image of this page).