- Sis (Kozan)
(Detail of a relief at Karatepe)

Tarsus was the main town of Cilicia, when towards the end of the XIth century, Armenian noblemen fled there after their country had been invaded by Turkish tribes. In 1199 it was in that town that Levon (Leo) I, first King of Lesser Armenia (i.e. Cilicia), was crowned, yet Tarsus was not easily defensible and Leo I preferred to reside in the inland fortress of Sis. 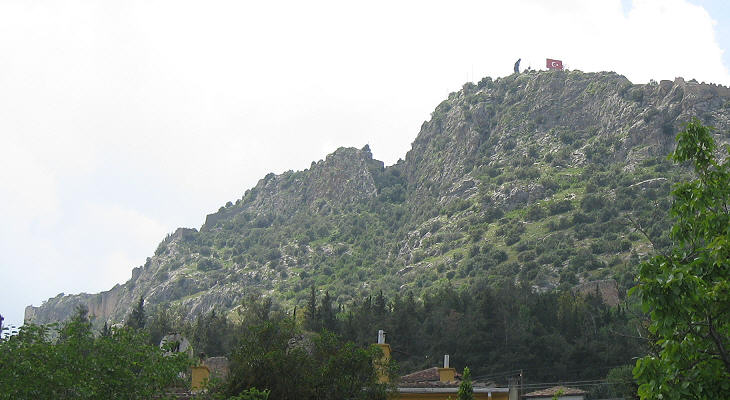 Overall view of Sis from modern Kozan: the Turkish flag is on the northern peak

Sis is located on a hill at the northern end of the Cilician plain; the hill has three peaks and the royal residence was placed on the southern one which was naturally protected by cliffs and which commanded a view over a large part of the kingdom. 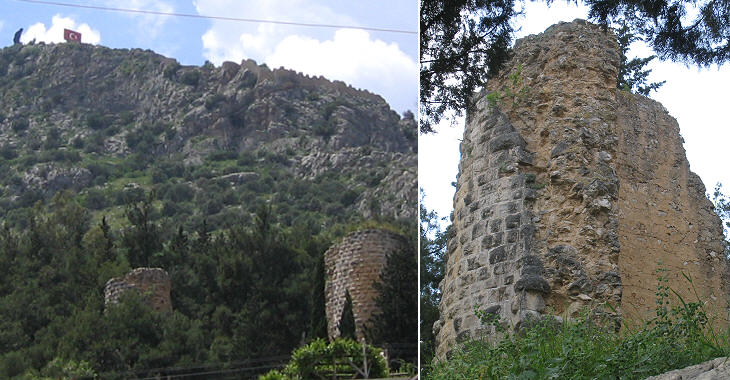 Fortifications at the foot of the hill (northern side)

The extent of the Kingdom of Lesser Armenia varied greatly over time, but at one point, although for just a few years, Leo I managed to expand it beyond the Tarsus range by conquering Laranda (Karaman). The coastal strip between Cape Anamur and Tarsus was controlled by the Armenian barons of Korykos whose allegiance to the kings residing in Sis was often doubtful.

The Kingdom of Lesser Armenia bordered on the east with the Principality of Antioch, a crusader state founded in 1098; rather than helping each other, the rulers of these two Christian states were involved in a series of fights; in 1216 King Leo I managed to install one of his nephews on the throne of Antioch, but at the king's death in 1219, this nephew was forced to leave. Only in 1254 a marriage between the Prince of Antioch and an Armenian princess ended the power struggle between the two states. 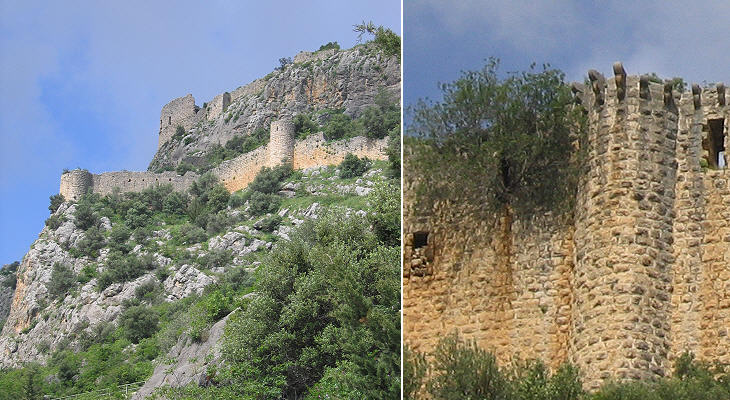 (left) Walls of the southern castle; (right) detail showing the excellent masonry of the walls; another detail is shown in the image used as background for this page

Because of the many contacts with the Crusaders, the Kingdom of Lesser Armenia was structured on a feudal system and the king, in order to effectively rule the country, needed the support of his barons. This was often acquired through dynastic marriages which sometimes reached the result of encouraging plots to poison the king. It is generally thought that in 1320 King Oshin was poisoned by his brother-in-law Oshin of Korykos. A century earlier Philip of Antioch, king consort of Queen Isabel was another victim of poisoning.

(left) Entrance to the castle; (right) detail of an Arab inscription

In ca. 1240 the Mongols made their appearance in the Near East; in 1243 they invaded the Seljuk Sultanate of Rum. The Kings of Armenia recognized the Khans as their ultimate sovereign and sought Mongol help to contain the raids of the Mamelukes of Egypt. In the following years, when the Mongols attacked the Mamelukes in Syria, Armenian troops fought on their side and the King of Armenia is reported as entering Damascus in triumph. The Mongols however were defeated in 1260 by the Mamelukes who retook Syria and asked the Armenian king to switch alliance; they then invaded parts of the kingdom; in 1268 a devastating earthquake struck Cilicia and further impoverished the country and in that same year the Mamelukes put an end to the Principality of Antioch.

Ruins of the residence of the kings

In 1280-1281 the Armenians joined forces with the Mongols in a second attempt to conquer Syria, but this failed and in the following years the Mamelukes gained control of the eastern part of Cilicia; the Mongols sent some troops to Sis to protect (and control) the king. 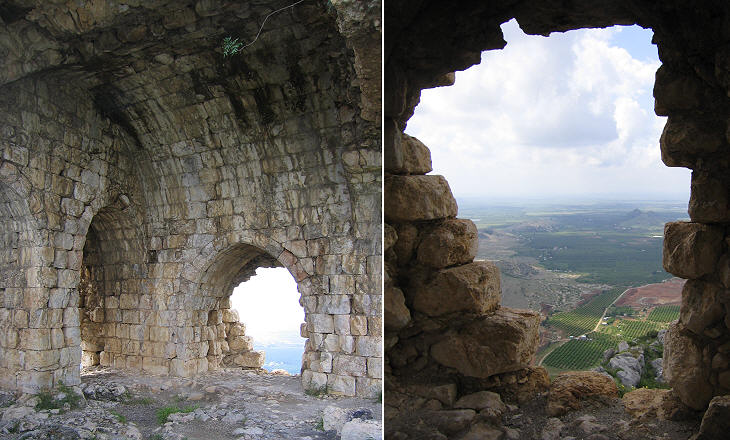 (left) Vaults of the main building; (right) view over the Cilician plain

A third conflict between Mongols and Mamelukes occurred between 1299 and 1303; again the Mongols managed to invade Syria but their success was short-lived and in 1303 they had to withdraw; in the meantime the Kingdom of Lesser Armenia had become a puppet state in the hands of the Mongol generals and this situation lasted for a couple of decades. In 1307 a Mongol general who was wary of the religious policy of King Hethum and his nephew Leo III, had them assassinated when they visited him. 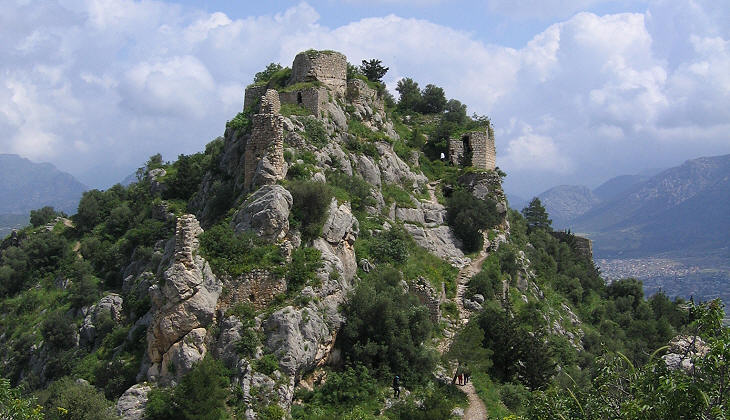 In 1341 a member of the Lusignan family who ruled over Cyprus became King of Lesser Armenia; he tried to impose Catholicism in order to obtain the support of the pope and possibly the help of a crusade; this religious policy met resistance from some of the barons; his successors eventually tried a policy of appeasement with the Mamelukes, but this too provoked a reaction and eventually the killing in 1373 of King Constantine IV. King Leo V, his successor, lived on Cyprus and he managed to reach Sis with difficulty because the Mamelukes were laying siege to the fortress; he was crowned in the summer of 1374 and in the next year the Mamelukes took Sis; the last king was captured, taken prisoner and sent to Cairo where he lived for seven years until a ransom was paid for him; he died in Paris in 1393. 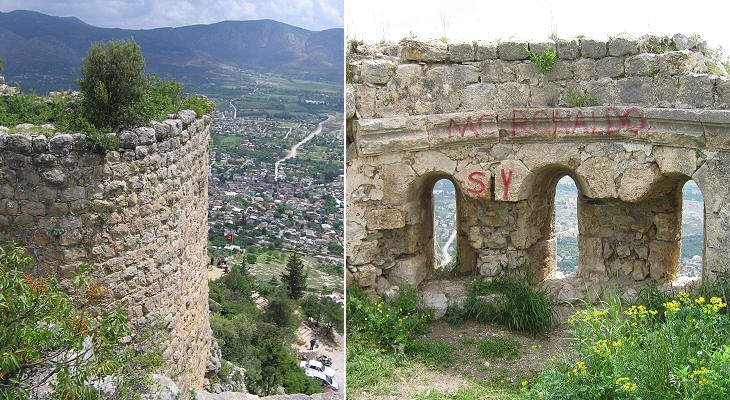 (left) View over modern Kozan; (right) ruins of a church (the graffiti is by a non-supporter of Cristiano Ronaldo, a Portuguese soccer player

(December 1836) Sis, in the same plain, covered with castles, (Turn, Seliyah, Meraneh.) is still the seat of an Armenian patriarch.
William F. Ainsworth - Travels and Researches in Asia Minor, Mesopotamia, Chaldea, and Armenia - 1842
Sis remained a centre of the Armenian church until 1915 when the Armenians were deported and the main monastery of Sis destroyed; it was home to the Catholicos of Sis, a sort of patriarch who was regarded as the ethnarch (during the Ottoman Empire this title was given to the leader in charge of a millet, a religious minority community).