- Adana
(Detail of a relief at Karatepe)

(December 1836) The features of the plain of Adanah are very uniform; but here and there is an occasional tree, most generally the locust-tree. The thorny acacia, the caper, and two species of mimosa, are its only shrubs; its flowering plants and grasses are numerous. Its more remarkable tenants are gazelles, foxes, hares, jerboas, ground squirrels, and large and small bustards. It is celebrated for its cultivation of cotton, and now produces much sugar-cane. There are also many date-trees, a further proof of the warmth of its climate. (..) Adanah is considered the third town in Syria. (..) It is a populous city, containing about 10,000 houses, and a population of 50,000 souls, of whom about 10,000 are Christians. The houses are mostly of two stories, and are all built of tiles, as if of the remains of an ancient town.
William F. Ainsworth - Travels and Researches in Asia Minor, Mesopotamia, Chaldea, and Armenia - 1842 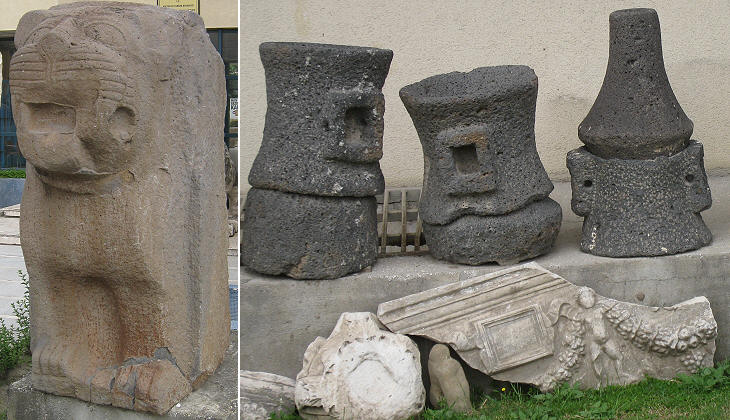 Although not so distinguished in the annals of history as Tarsus, it was still, in ancient times, a town of much importance. It is noticed by Ptolemy and Pliny. Ainsworth
Hattusa was the capital of the Hittites and it retains several interesting monuments of their civilization. However there are very interesting Neo-Hittite reliefs also at Karatepe north-east of Adana. The Hittites used to place guarding lions at the sides of their gates.
Today Cukurova (Cilicia) is a very rich farming district, owing to a major system of dams and canals. The region knew another period of great agricultural development during the Roman rule; Roman engineers were very good at controlling the flow of rivers and the many grinding stones found near Adana testify that the region was a granary for the whole empire (these types of grinding stones can be seen also at Ostia). 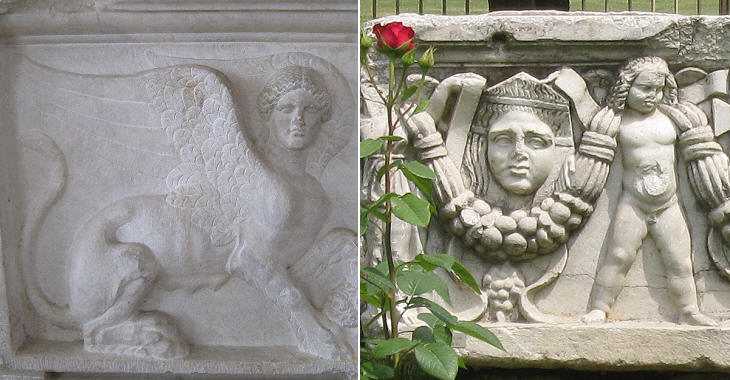 Of all the sites between the pass of Taurus and that of Syria is the only one which may be said to have attained greater importance in modern times than it possessed at a more remote epoch. Ainsworth
Adana has limited memories of its ancient past, but its museum has many interesting exhibits of the Hellenistic/Roman periods which were found in the whole region. For a time it was called Antiochia ad Sarus to distinguish it from Antiochia ad Orontes. 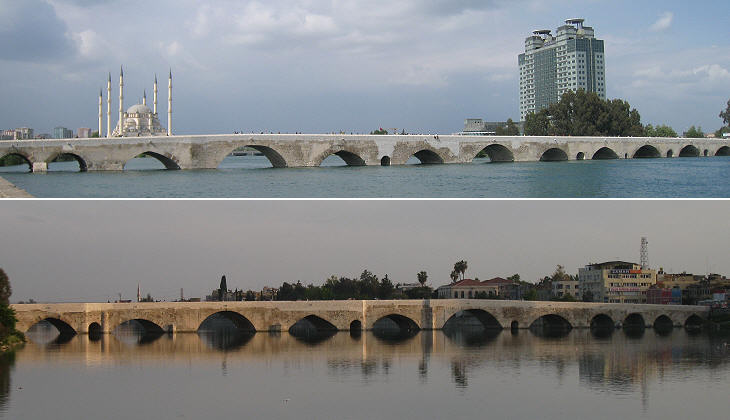 We left Adanah by the fine bridge which crosses the Seihun at this point. The river is here, by our measurements, 325 feet in width, but not very deep. Ainsworth
In August 117 AD Emperor Trajan died at Selinus, near Alanya, which was part of the Roman province of Cilicia. He had brought the Roman Empire to its maximum expansion by adding the new province of Mesopotamia. Emperor Hadrian, his successor, chose to devote himself to consolidating the Empire, rather than to expanding it further; he promoted the construction of many facilities, including a very long bridge over the Sarus (Seyhan), although there is not absolute certainty about the year of construction. The bridge was restored by the Byzantines and by the Muslim rulers of the town; it is now reserved to pedestrians (and motorcyclists), but until a few years ago it was used also by cars and trucks. 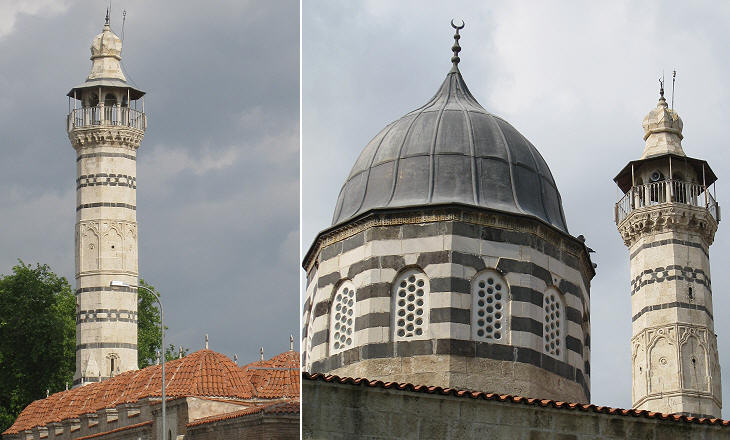 It contains a jami, built by Piri Pasha, of the ancient and powerful Turkoman family of Ramazan Oghlu, who otherwise ornamented the town. It also contains a madreseh (college) and other public buildings. Ainsworth
In the early XVIth century Adana and most of Cilicia were ruled by the Ramazanoglu; they were of Turkish descent, but they acknowledged the sovereignty of the Mamelukes who controlled Egypt and Syria. The construction of Ulu Cami was started in 1513 and it was completed in 1541, when the region was part of the Ottoman Empire; the Ramazanoglu managed to retain their influence also with the new rulers. 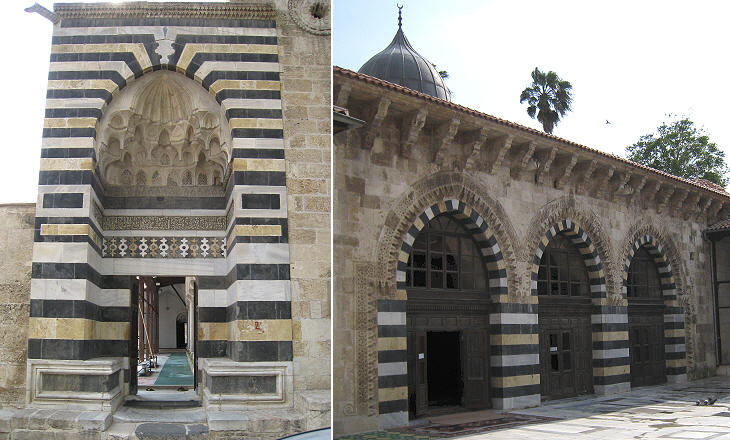 The style of Ulu Cami shows the influence of Syrian architecture; the decoration is based on the strong contrast between white and black stones, similar to what can be noticed at Aleppo. 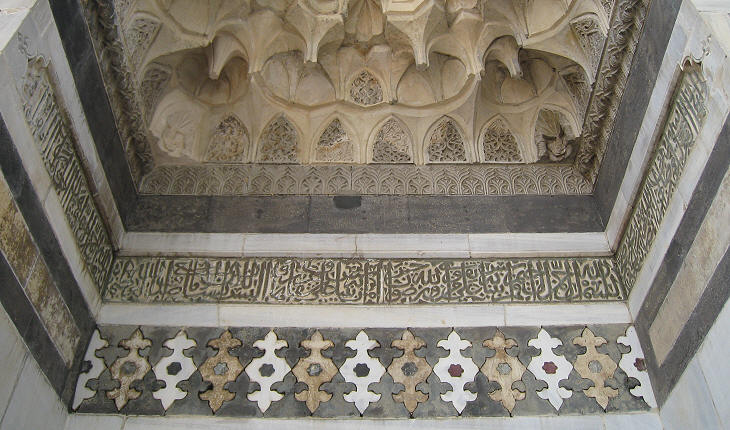 Ulu Cami: detail of the portal

We found at Adanah, Ahmed Pasha and Khurshid Pasha, both generals of Mehemet Ali, who received us very kindly; the first speaks French, and was well known to us previously. (..) They then spoke of the state of Syria under the Egyptians compared to what it had been under the Turks. Ainsworth
The Ottomans did not promote the development of Adana; it was only in the 1830s during the occupation by Ibrahim Pacha, son of Muhammad Ali, the very autonomous governor of Egypt, that the introduction of cotton growing laid the foundation for the agricultural and industrial development of Adana and its region. 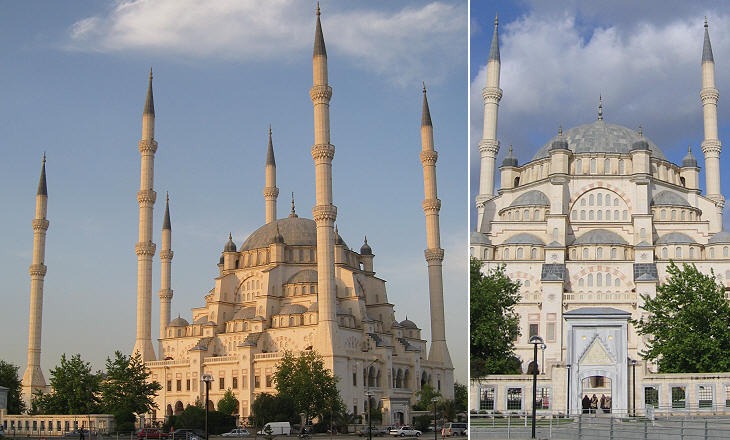 Today Adana is one of the largest cities of Turkey; its growth and wealth is in part due to the entrepreneurial skills of Haci Homer Sabanci; he started his career in 1921 as a cotton picker, but with his savings he managed to become a broker for cotton harvesters and eventually a cotton trader. He then entered cotton manufacturing and he extended his interests to other sectors including banking. The holding controlling all these activities is based in Adana where it has established a major charity institution. The imbalance between the wealth of modern Adana and the relevance of its monuments led the Sabanci foundation to build the largest mosque of Turkey; it is very similar to Sultan Ahmet Camii in Istanbul; its very Ottoman design was meant to give Adana a very Turkish skyline and atmosphere.

The image used as background for this page shows a Hittite relief in the Museum of Adana.