- The Heirs of Sinan
(inscription on a gate opposite Topkapi Sarayi)

After the death of Nurbanu Sultan in 1583, it was the turn of another woman of Venetian origin to influence the government of Sultan Murat III: his consort Safiye (The Pure One) Sultan. She was a relative of Nurbanu Sultan; she often acted through a Jewish woman who was allowed to have an active life outside the Harem. Maybe for this reason 2006 Nobel Prize for Literature Orhan Pamuk had a smart Jewish woman as a main character in his novel My Name is Red which takes place during the reign of Murat III. 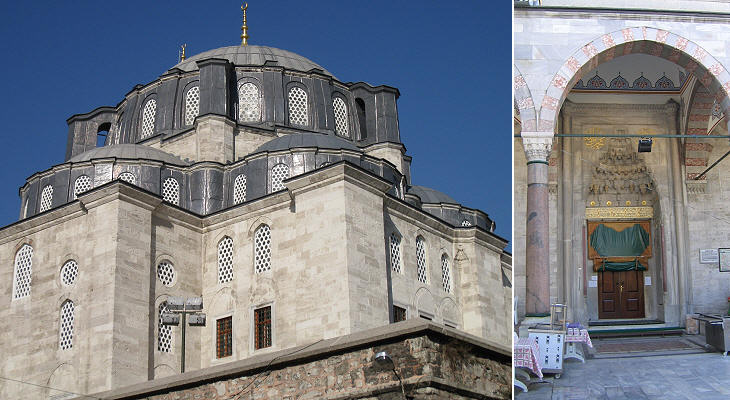 Cerrah Pacha Camii was Grand Vizier for a short period in 1598, but the mosque on the Seventh Hill which is named after him was built a few years earlier. It was designed by Davut Aga, Mimar Sinan's successor as Chief Architect. It commands an extensive view over the Marmara Sea. Cerrah means surgeon and the Pacha was given this title when he performed the future Sultan Mehmet III's circumcision. 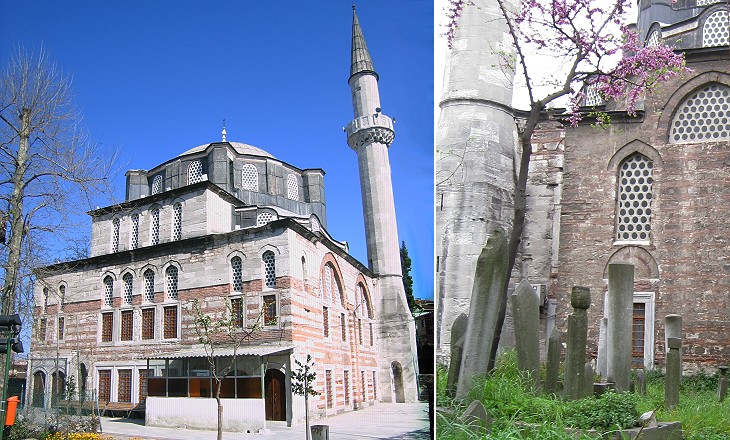 This mosque was built on the abandoned site of Blachernae, the Byzantine imperial palace; its minaret can be seen above two thick towers which strengthened the walls of Constantinople at that location. Ivaz Efendi was a kazasker, a military judge, probably the highest official of that branch of the Ottoman judiciary system. Its design is popularly attributed to Sinan, but the mosque is not mentioned in Tezkeret-ul Ebniye, the list of Sinan's works drawn up by one of his friends and thought to be very reliable. The use of bricks and white stones shows continuity with the Byzantine tradition. 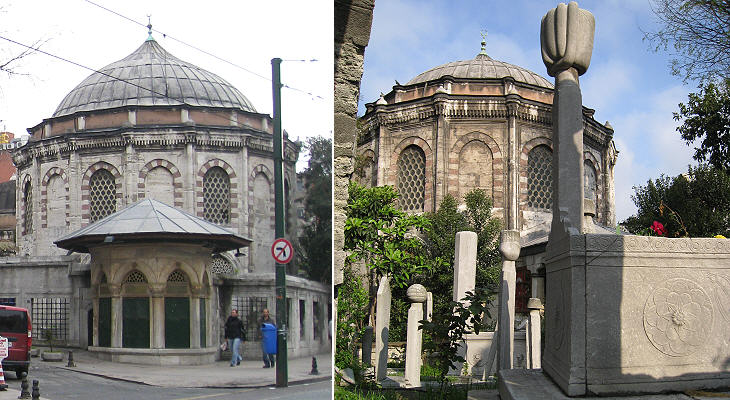 Koca Sinan Pacha is best known for having been Grand Vizier five times; this is an indication that the Sultans were no longer executing their grand viziers when they grew dissatisfied with them. He built a small kulliye of which by far the most imposing building is his own turbe. It is a fine work by Davut Aga. 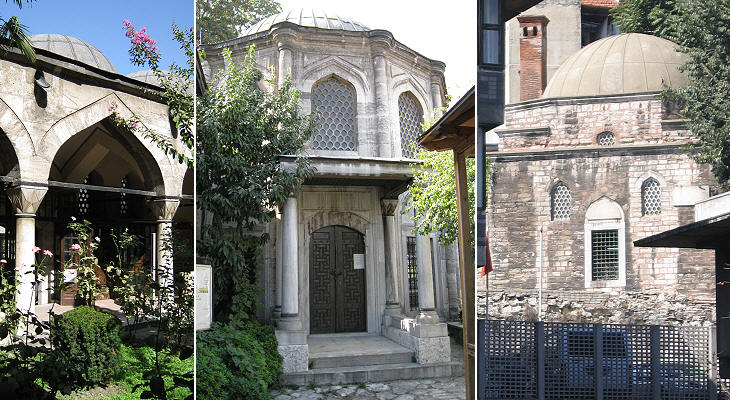 The reign of Sultan Mehmet III began in 1595 with the murder of his nineteen stepbrothers. A crowd of mourners twice the size of that which had come out for the funeral of Murat III appeared the next day for the funeral of his nineteen sons; the Venetian ambassador reported that before their execution they had been brought before the new sultan shortly after his arrival in the palace:
"They say that the eldest, a most beautiful lad beloved by all, when he kissed the Sultan's hand, exclaimed: - My Lord and brother, now to me as my father, let not my days be ended thus in this my tender age.
The Sultan tore his beard in a sign of grief, but remained silent. They were all strangled, all nineteen."
Gazanfer Aga was the Head of the White Eunuchs; he was of Venetian origin and had been captured when he was a boy; he became a servant of the future sultan Selim II who convinced him to become an eunuch. With the favour of Nurbanu and Safiye Sultan he became one of the most influential persons in the government. He served three sultans, but in 1603 Mehmet III had to face an almost open rebellion of the highest ranks of the army; they accused Gazanfer of ill advising the sultan and Mehmet eventually was forced to sacrifice Gazanfer, who was murdered before his very eyes. Gazanfer was the last of the White Eunuchs to be the chief of the Harem; Sultan Mehmet III gave this role to a Black Eunuch; the difference did not lie just in the colour of the skin; the emasculation of white eunuchs was limited to testicles, whereas that of black eunuchs included also the penis; there had been rumours that white eunuchs were able to have sexual intercourse with the concubines.
Gazanfer Aga built a small medrese and his own turbe near the Aqueduct of Valens and at a short distance from a small hammam designed by Mimar Sinan.

In 1597 Safiye Sultan who had the title of Valide (Mother of the Sovereign) started the construction of a large complex opposite Galata. She was called Yeni (new) Valide to distinguish her from Nurbanu Sultan, her mother-in-law, the Atik (old) Valide. The complex was designed by Davut Aga, but the death of the architect in 1599 slowed the pace of the construction. In 1600 work was suspended because Safiye Sultan's charitable expenses came under scrutiny; in 1603 Sultan Mehmet III died and Safiye Sultan was deprived of her role at the Ottoman court and was unable to finance any longer her mosque. Finally in 1606 Sultan Ahmet I decided to build a very large kulliye and the construction of Yeni Valide Camii was suspended. 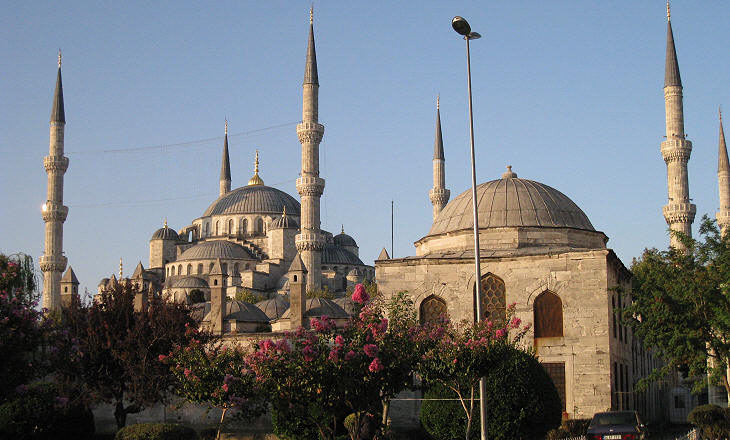 One side of the atmeydan, the ancient hippodrome, is occupied by Sultan Ahmet I. who in 1610 constructed a mosque with such profuse expence that every stone was computed to have cost him three aspars. He was so intent upon this plan, that every Friday he worked himself for an hour, and paid the artificers their wages.
James Dallaway - Constantinople Ancient and Modern with Excursions to the Shores of the Islands of the Archipelago and to the Troas - 1797
Ahmet I was only thirteen when he became sultan. For once the new ruler did not kill his brothers and did not follow the advice of his mother. He was very religious and he tried to enforce Islamic laws and traditions.
From a political viewpoint his reign saw the end of the Ottoman expansion in Hungary and in the Caucasus where Persian Shah Abbas I reconquered parts of Armenia and today's Azerbaijan. 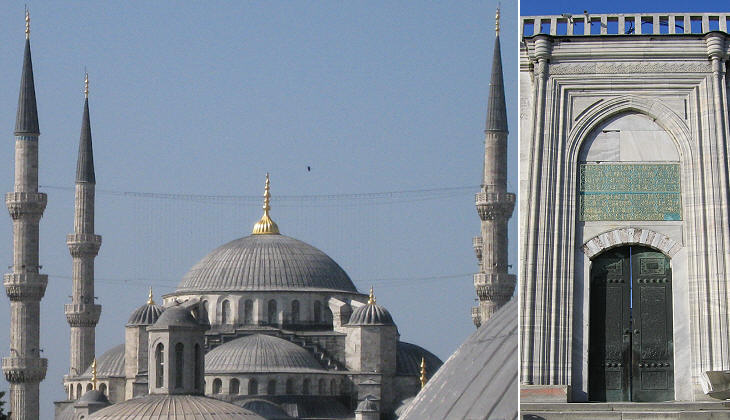 One of the reasons which had slowed the construction of Yeni Valide Camii was the fact that it was built in a heavily populated area; this meant the eviction of the inhabitants and their relocation in a new neighbourhood, a lengthy and expensive process.
For this reason Ahmet chose to build his kulliye on the ruins of Justinian's Great Palace and of the eastern side of the Hippodrome. As a mark of superior magnificence, there are six minarets, of extraordinary height and beauty, filletted by three capitals or galleries in the Saracenic style, and finished by sharp cones. Dallaway
The initiative of the sultan was criticized by those who should have favoured it: the ulema (Muslim theologians). They declared that the erection of six minarets, two more than in the Great Mosque of Mecca, was a violation of a religious rule. They also said that pious foundations should be established by a sultan only with the revenue/booty gained in war against the Infidels and Ahmet did not win any such wars.
The construction of this grand complex perhaps played a role in Shah Abbas' decision to build a grand mosque at Isfahan, his new capital. 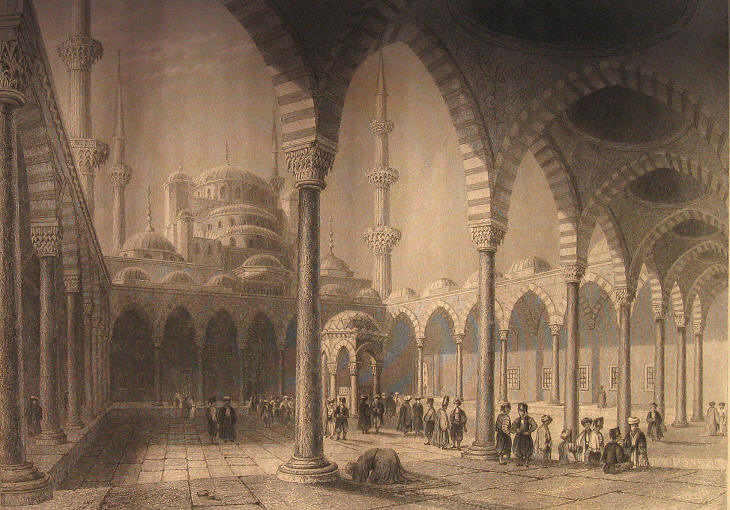 The approach to this as well as to other mosques is rendered more grand by a large area surrounded by a lofty colonnade of marble, or porphery, forming a stately ambulatory, on the roofs of which are disposed thirty small cupolas, and at the angles the minarets. In the centre are fountains of polished marble, and the gates are of wrought brass, without figures in relievo. Dallaway
Sultan Ahmet Camii is preceded by a courtyard as large as the interior of the mosque. The fountain for ablutions is too small with respect to the general dimension of the building and the ablutions actually take place outside the courtyard. 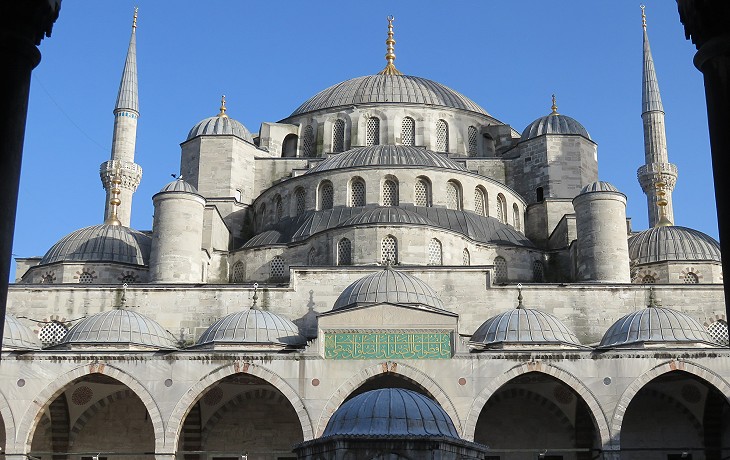 Sultan Ahmet Kulliyesi was designed by Mehmet Aga, who had worked with Mimar Sinan and had completed the construction of Muradiye Camii at Manisa. He was appointed Chief Architect of the Empire in 1606 and he died just after having completed the construction of the kulliye.
Sultan Ahmet Camii is regarded as the last great mosque of Classic Ottoman architecture. Its design recalls that of Hagia Sophia, but it is more complex because of the four semi-domes and a number of smaller domes. 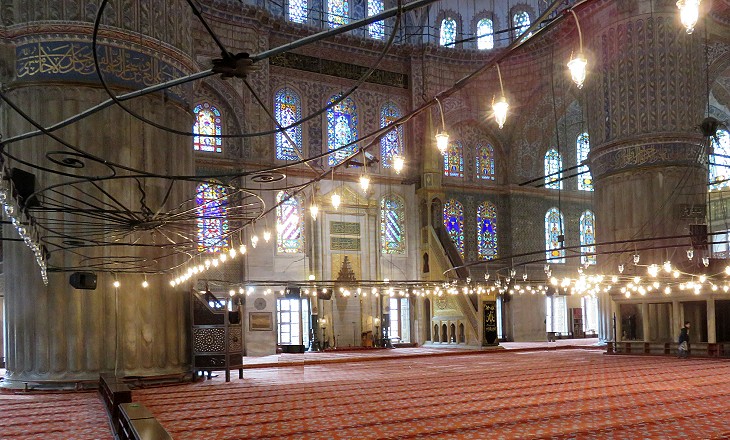 As to internal embellishment, the walls are gaudily painted in fresco without regularity, many gilt tablets, inscribed with Arabic characters, are placed against them, and the floors universally covered with carpets. The windows, consisting of many small pieces of stained glass thickly studded, have a singular richness. Dallaway
The design of the interior is marked by the four gigantic pillars supporting the central dome. In other mosques their presence is not as evident as here because they were partially included into walls, whereas Mehmet Aga chose to have them free-standing. The mihrab and the minbar are finely decorated, but too small when compared to the pillars. 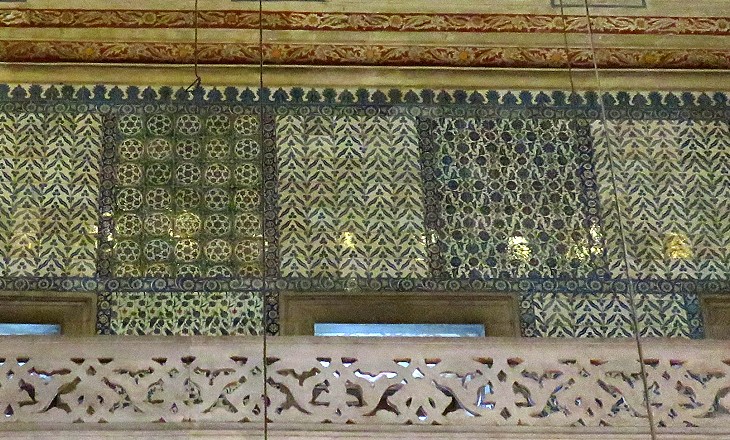 The mosque is usually known as the Blue Mosque due to the prevailing colour of the tiles which decorate its interior. Their design show the hand of Mehmet Aga himself, who for many years had worked at making precious inlays, to the point of being known as sedefkar (worker in mother-of-pearl). 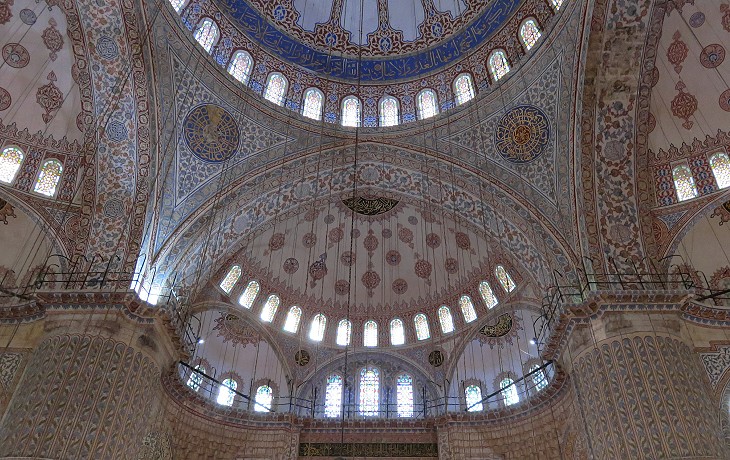 Sultan Ahmet Camii: one of the semi-domes

The painted arabesques of the interior are modern. They have too bright colours for a four-hundred-year old monument. We know that the original decoration had more subdued tones which best suited the religious purpose of the building, i.e. to favour a state of mind apt for prayer. 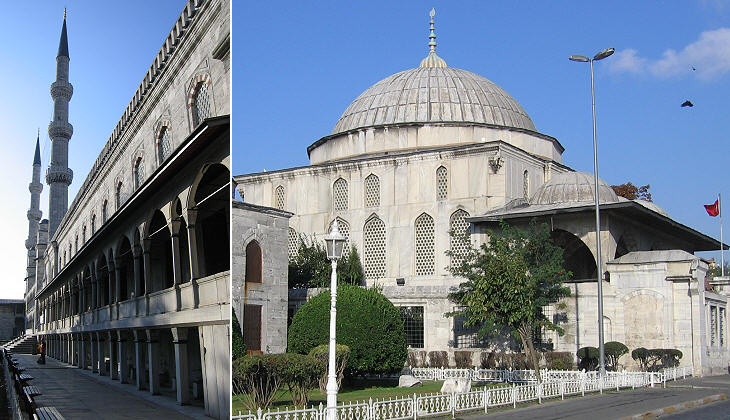 Sultan Ahmet I continuously controlled the speed of the construction which was completed in 1616; the next year he died of typhus at the age of 27, so that his reign was entirely devoted to his kulliye.
Today Sultanahmet is the name of the district of modern Istanbul which includes its main monuments. 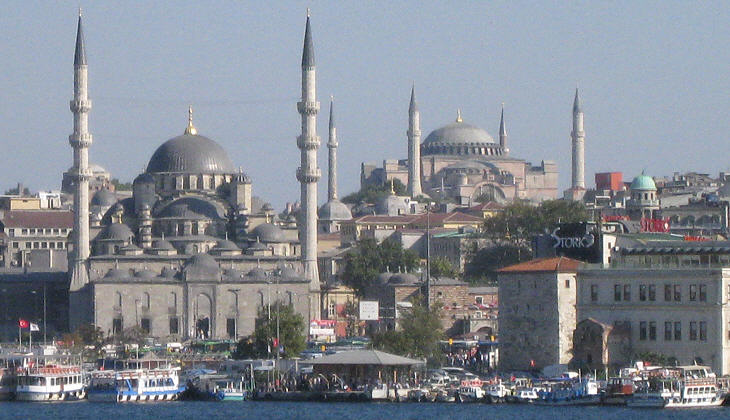 The construction of Yeni Cami was resumed only in 1661 by Turhan Sultan, another Valide; she was the mother of Sultan Mehmet IV who ascended the throne in 1648 at the age of seven. She did not become Valide Sultan immediately because this role was retained by the previous Valide (Kosem Sultan). The two women plotted against each other and eventually Kosem Sultan was strangled with a curtain. 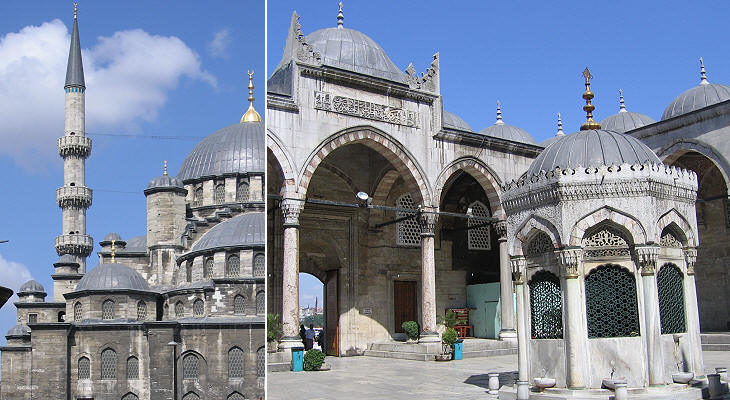 Turhan Sultan became the tutor of the child sultan after the death of her mother-in-law. It was a difficult period for the Ottoman Empire; the War of Candia turned sour for the Ottomans when the Venetians managed to block the Dardanelles and therefore prevented vital supplies reaching Constantinople. Turhan Sultan was forced to transfer her power to the Grand Vizier and to dedicate herself to pious foundations. The complex was completed with an elegant sebil; this word means "way/path" and the construction of a sebil eased the way to Paradise for its founder. At a sebil passers-by were given glasses of water through ornate bronze grills: most of them have been converted into kiosks selling newspapers, cigarettes and candies; the sebil of Yeni Cami is one of the few which retains its original purpose. The image used as background for this page shows another view of Sultan Ahmet Camii.