You may wish to see an introductory page to this section or the initial page on Topkapi Sarayi first.

The Harem section of Topkapi seen from Suleymaniye (the Tower of Justice is not part of it). The skyscrapers in the background are situated at Atasehir, a new development in the Asian section of Istanbul. The trees in the foreground are those of Gulhane Park, the outer gardens of the palace, which today are open to the public

The image shows a complex of buildings in the north-western side of Topkapi Sarayi where the harem (i.e. the wives and concubines) of the Sultan spent their lives. The Venetians called it seraglio, from Turkish saray (palace). Today the complex is usually named after those who lived in it. Its construction did not follow an overall plan and is the result of additions and changes made between the late XVIth century and the late XVIIIth century. A very high wall separated the Harem from the outer gardens, so that no one could see inside and the wives and concubines of the Sultan could not see outside. The Kiosk built by Sultan Osman III in 1754 had windows towards the garden, but it was reserved to the Sultan and it was not freely accessed by the women of the Harem. The Sultan entered the Harem through a passage near the Revan Pavilion. Today visitors access it from the second courtyard through the Eunuchs' quarters. 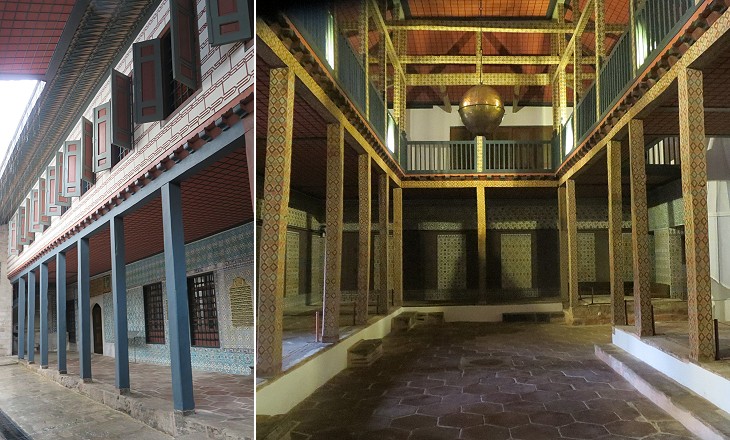 Eunuchs were the custodians of the Harem, but a corps of halberdiers was in charge of controlling the passage between the Eunuchs' Quarters and the rest of Topkapi Sarayi. The small barracks of the Halberdiers was situated near the stables in the second courtyard. Their quarters were built around a courtyard and they included the dormitories, a hammam, a small mosque and a room where the guards spent their free time. Halberdiers' Quarters: (above) long inscription celebrating improvements made by Sultan Murat III and "tughras" (monograms) of other sultans; (below-left) tiles of the dormitories; (below-centre) a mantelpiece; (below-right) a halberdier preparing coffee

Sultan Mehmet II, the founder of Topkapi Sarayi, did not live there with his harem, but at Eski Saray (Old Palace), a (lost) palace which stood where the University of Istanbul stands today. This arrangement continued for almost a century until Roxelana/Huseki Hurrem, chief consort of Sultan Suleyman, convinced her husband to build some wooden pavilions for her to stay next to him when he handled state affairs. The construction of permanent quarters for the harem was promoted by Nurbanu Sultan, mother of Sultan Murat III, in the late XVIth century. The first pavilions were designed by Mimar Sinan and Davut Aga, his successor as Chief State Architect. 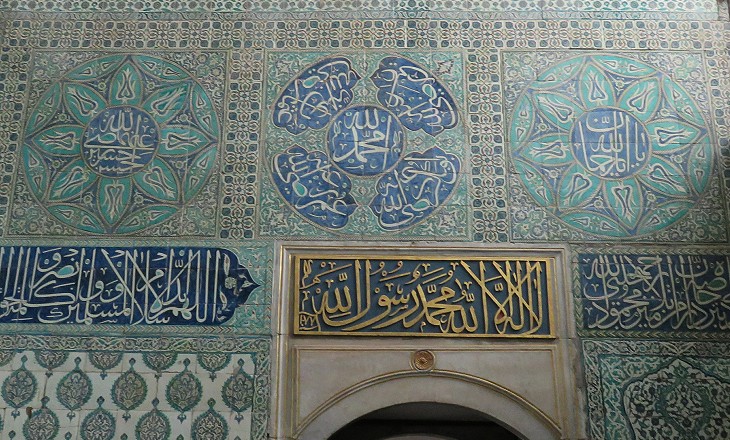 Hall of the Ablutions in the Eunuchs' quarters

The Eunuchs' Quarters were located between those of the Halberdiers and the area reserved to the harem. With four wives and lots of concubines, a sultan had many children. Some of them however did not bear any resemblance to him. In 1575 Sultan Murat III appointed the Abyssinian Mehmet Aga as the Chief Harem Eunuch and in the following years all the eunuchs from European territories (White Eunuchs) who had contacts with the women were replaced by African slaves (Black Eunuchs) whose emasculation was more radical. 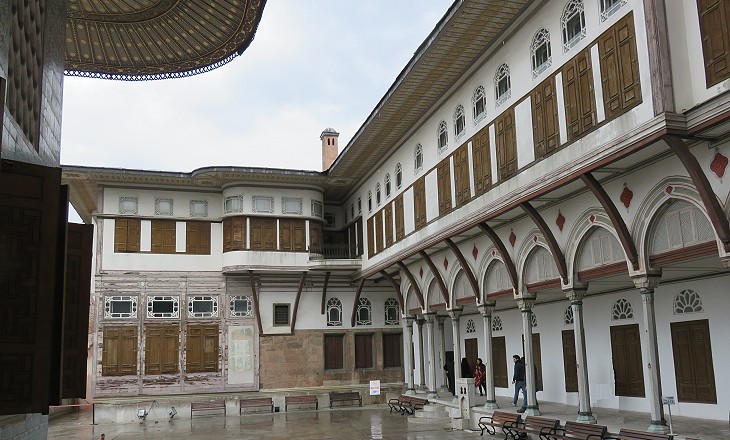 Courtyard of the Favourites

The women living in the Harem were mainly girls captured in war, slave girls recruited within the empire or girls of neighbouring and vassal countries who were offered to the Sultans as a gift. After a period of training they became concubines and those among them who shared the bed of the sultan became Favourites. Competition to gain and retain the favour of the sultan was hard because only four of the Favourites could achieve the status of wife and give their children the chance of becoming sultan. 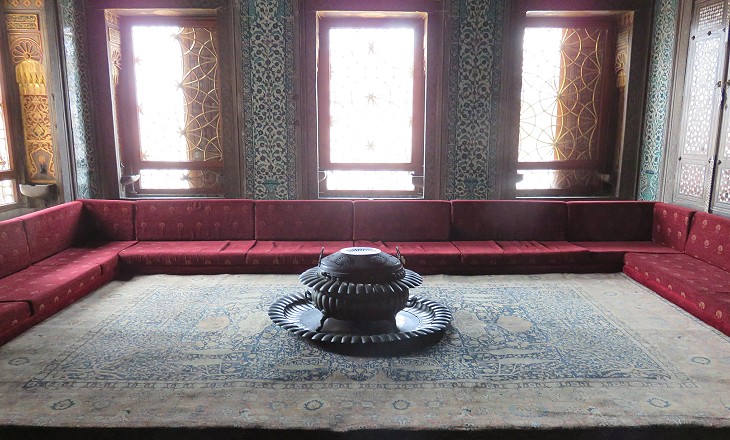 This hall is indicated as the location where the younger brothers of the designated heir spent their time. The succession to the Ottoman throne was marked by many conflicts among brethren. In 1481 Prince Cem rebelled against his elder half-brother Beyazit II. In 1512 Princes Ahmet and Selim, Beyazit's sons, fought a war which ended with the victory of the latter. It is said that Selim ordered the killing of all the brothers of his designated heir Suleyman in order to ensure a smooth succession. Suleyman in turn arranged the murder of two of his sons to favour Prince Selim II. The memory of these family killings however pales in comparison with the decision of Sultan Mehmet III to have his nineteen brothers and half-brothers strangled immediately after his accession to the throne in January 1595. 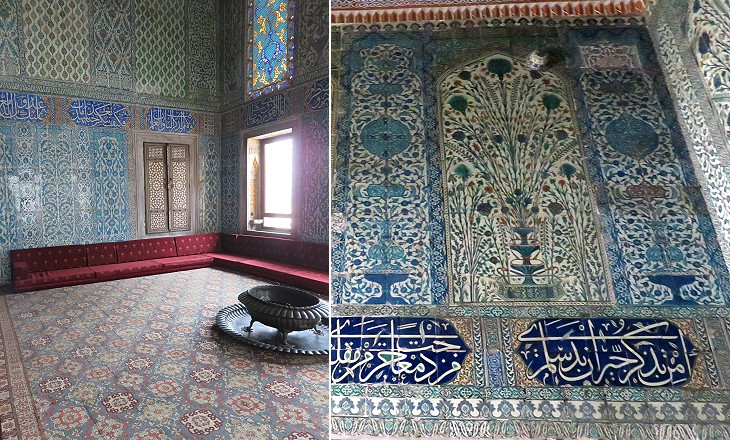 This cruel event led to a change in the succession rules by which a sultan would be succeeded by his younger brother. However the ruling sultans, rather than training their brothers to their future responsibilities, kept them in the Harem in small apartments known as cages, often in solitary confinement. Sultan Osman III acceded to the throne in 1754 when he was fifty-five after having spent his whole life in the Harem. 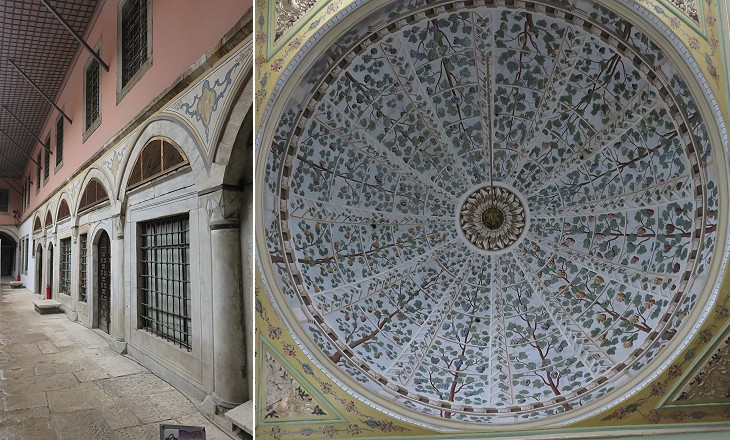 The real power in the Ottoman Empire very often lay in the hands of the Valide Sultan (Queen Mother), of the prospective Valide Sultan (i.e. the mother of the Sultan's heir), of the Chief of the Black Eunuchs and finally of the Janissaries, who, similar to the Praetorian Guards of the Roman Emperors did not hesitate to depose sultans they disliked. For this reason historians speak of a "Sultanate of Women" between the death of Sultan Suleyman in 1566 and the rise to power of Grand Vizier Koprulu in 1656. 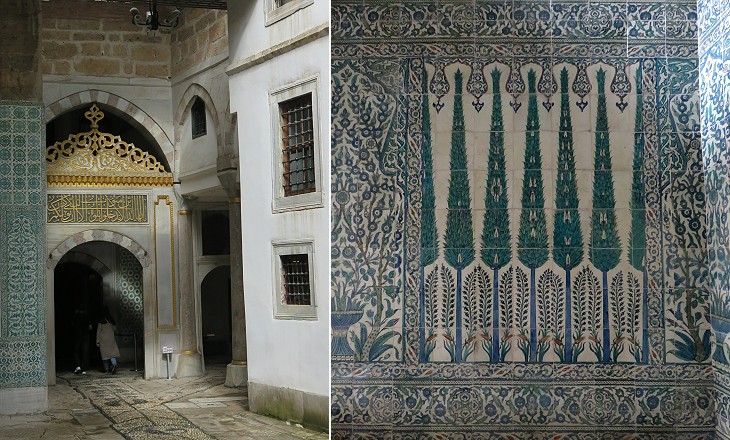 (left) Gate between the Eunuchs' Quarters and the women apartments; (right) tile decoration near the gate

The Harem is a maze of narrow passages and small courtyards which contrasts with the large open spaces of the other sections of Topkapi Sarayi. It was perhaps to make up for the lack of real gardens that the Iznik tiles of the Harem were finely decorated with trees and flowers. The oldest sections of the Harem are by far the finest ones. Elegance of design was combined with simplicity. Marbles, Iznik tiles, mother-of-pearl-encrusted wooden panels were employed to achieve this result which gains from the lack of furniture and the limited use of golden surfaces. 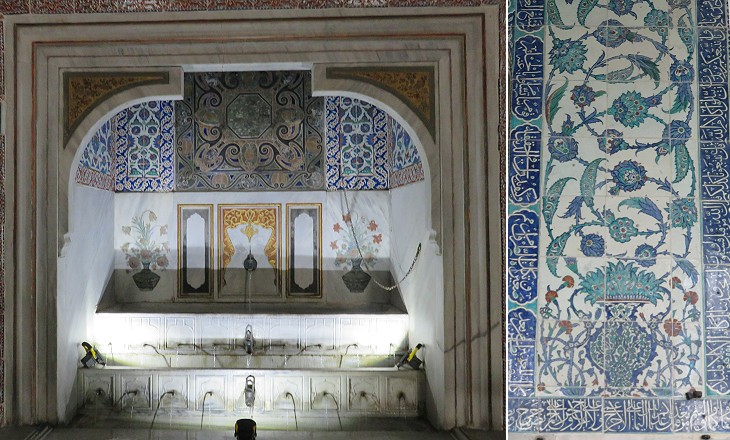 This hall is said to have been designed by Mimar Sinan himself. It was decorated with very fine tiles and it includes a three-tiered fountain set in a marble embrasure. The image used as background for this page shows a detail of a mother-of-pearl decoration of this hall. Its repetition in the page conveys the idea of the "golden cage" which the Harem was. 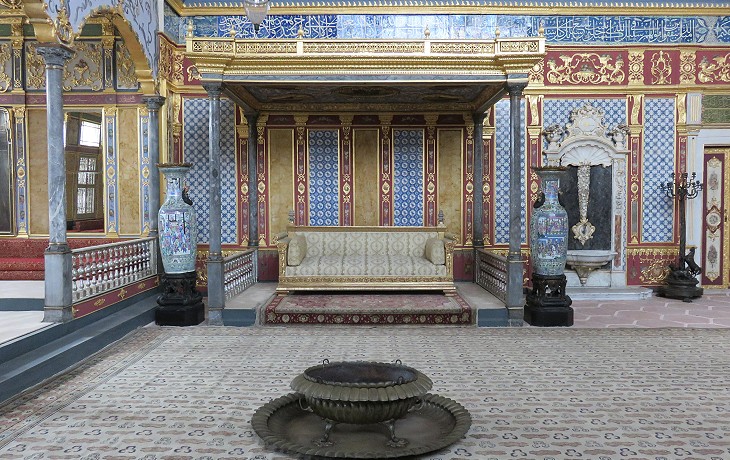 The Imperial Hall, where entertainments and wedding ceremonies took place, was renovated in the XVIIIth century after a fire in 1666 destroyed many parts of the Harem. The Sultans were collectors of Chinese vases as far back as the XVth century, but other pieces of furniture in this hall came from Europe. 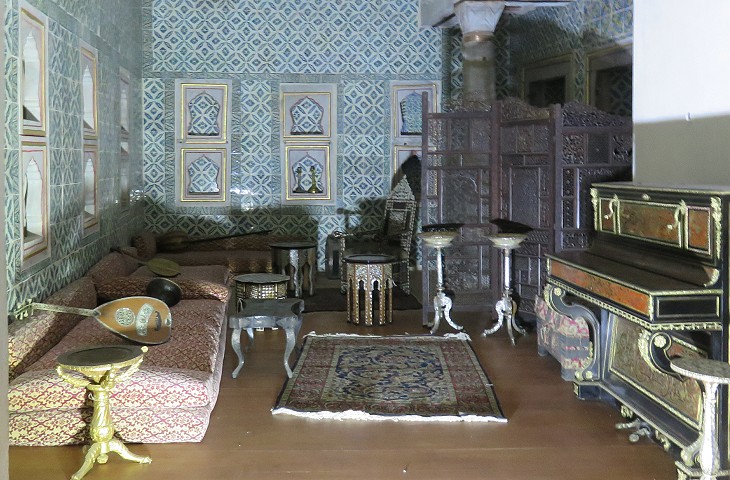 Similar to what occurs in other parts of Topkapi Sarayi, some rooms show the influence of European, mainly French, taste. In 1856 Sultan Abdulmecit I and his harem left Topkapi Sarayi and moved to Dolmabahce Sarayi, a European-style palace on the edge of the Bosporus. 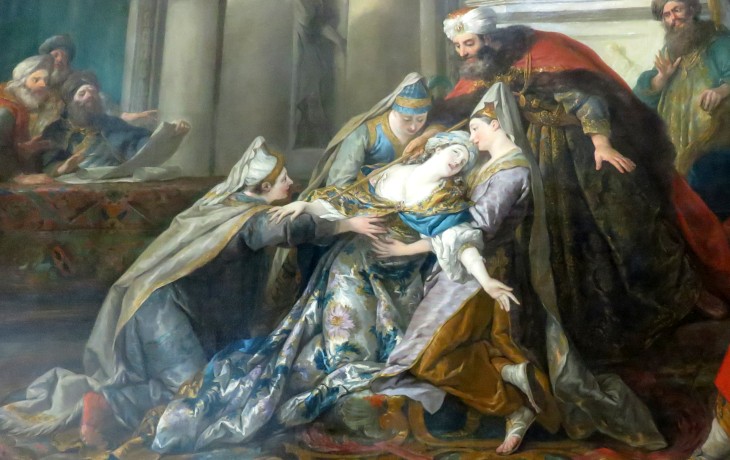 Louvre Museum in Paris: detail from Jean-François de Troy's "Esther's Fainting" (1737) which portrays the leading characters in Ottoman costumes; you may wish to see other depictions of Ottoman costumes at Palazzo Colonna in Rome

Return to Topkapi Sarayi - initial page or visit the Third and Fourth Courtyards.