You may wish to see pages on the walls, gates and Roman and Byzantine monuments of the town first. 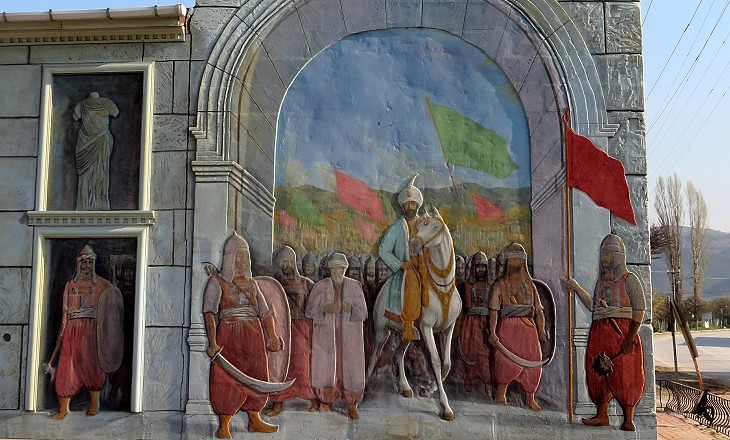 In a few years Nicaea yielded to the victorious armies of Osman, but he failed in his endeavours to retain it; for in 1331 the reign of his son Orhan was firmly decided. His court was then kept in the ancient palace, with all the splendour of an Asiatic prince (..) In 1397, upon the defeat of Bayazid, Nicaea was invested and taken by Tamerlane; and it still maintained its rank as one of the chief cities of Anatolia. The palace with its appendages remained till the conclusion of the next century (..). Such a sketch of the annals of this once magnificent city may tend to increase an interest in its present fallen and melancholy state. That its walls alone exist, of all the splendid edifices of its first masters, strongly excites the idea of desolation; and that even those of the Turks are blended in the common ruin, confirms it to an extreme degree. Modern Iznijk is a wretched village of long lanes and mud walls, with spacious ruins of Greek churches, and even of mosques and baths of Turkish architecture.
James Dallaway - Constantinople Ancient and Modern with Excursions to the Shores of the Islands of the Archipelago and to the Troas - 1797 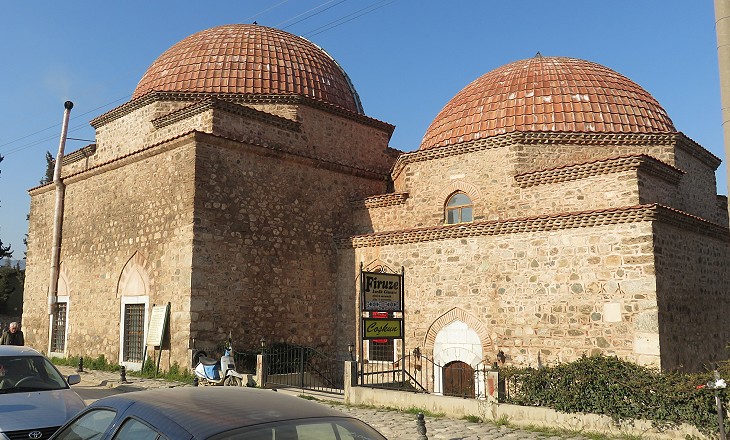 Ibn Battuta, one of the greatest travellers of all time, visited Iznik shortly after its conquest by Orhan Gazi: Yaznik lies in a lake and can be reached only by one road like a bridge admitting only a single horseman at a time. It is in ruins and uninhabited except for a few men in the Sultan's service. Inside there are orchards and houses and fields and drinking water is obtained from wells. Translation by H.A.R. Gibb.
Orhan Gazi and his successors did their best to repopulate Iznik and return it to its former state. A much restored hammam with separate halls for men and women is one of the oldest Ottoman monuments of the town, as it was founded in 1345 (but some sources believe its current aspect to be the result of XVth century changes). It was part of a complex which included a mosque and the turbe (mausoleum) of the founder. The section for men is still in use. 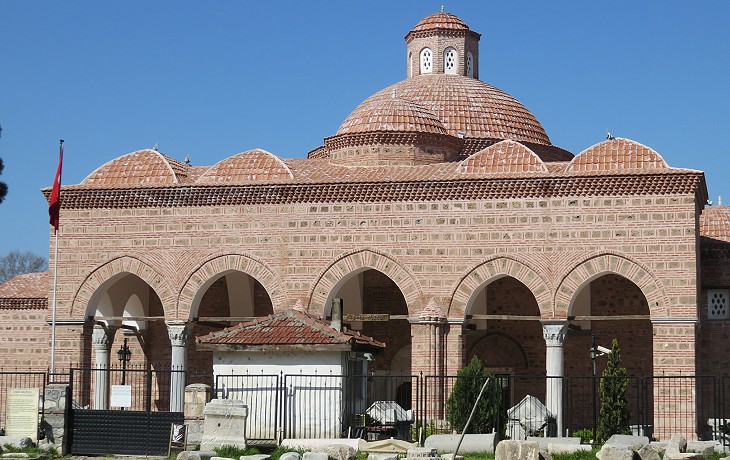 Nilufer Hatun was the wife of Orhan Gazi and the mother of Murat I, the next Sultan. She was the first to hold the title of Valide Sultan (Queen Mother) and her son dedicated a hostel for travelling dervishes to her. Its design is characterized by a wide portico, a feature it has in common with many mosques of nearby Bursa, which had been the Ottoman capital until 1363 and remained one of the most important cities of the Empire afterwards. The hostel was eventually turned into an imaret. 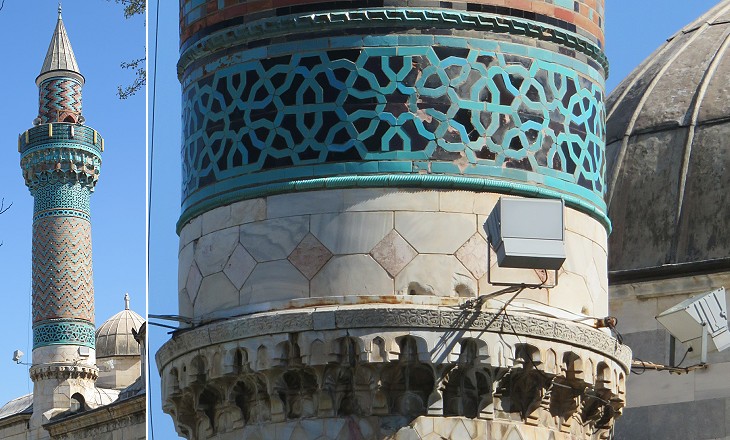 Minaret of Yesil (Green) Camii. The image used as background for this page shows a detail of its decoration

The minaret of the mosque which was built by Hayrettin Pacha in 1378-1392 is the landmark of Ottoman Iznik. The colour of its tiles eventually became the name by which the whole building was and is usually referred to (similar to what occurred to a large mosque in Bursa). Apparently Turks do not make a great difference between yesil (green) and gok (blue), because the tiles of Gok Medrese at Sivas have the same colour as those of Yesil Camii (we would use the word turquoise for all of them). 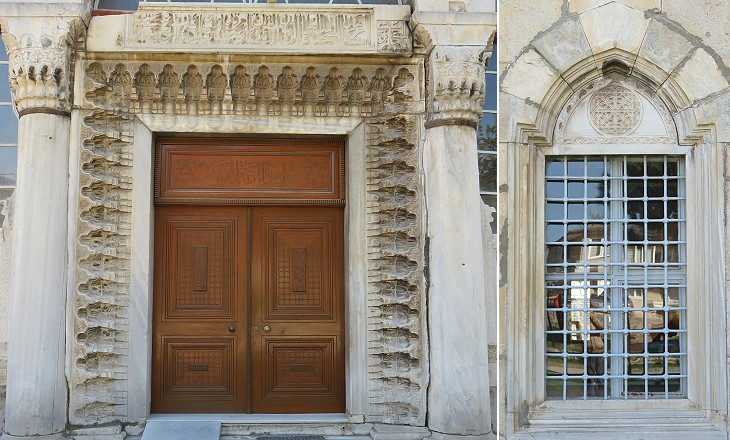 Details of Yesil Camii: (left) portal, its thick frame recalls a similar decoration at Isa Bey Camii in Ayasoluk; (right) one of the windows

Hayrettin Pacha is best known as Candarli Kara Halil Pacha the Elder. He was the very powerful grand vizier of Sultan Murat I. He held that office for 23 years, more than any other of his successors. He had a military background. Two of his sons and one of his grandsons became grand-viziers, so the Candarli established a sort of parallel dynasty to that of the Sultans.
Their power came to an abrupt end on June 1, 1453, two days after the Fall of Constantinople when Sultan Mehmet II ordered the execution of Candarli Kara Halil Pacha the Younger. The Grand Vizier had opposed the Sultan's decision to deliver the final blow to the waning Byzantine Empire. A fortress near Smyrna is named after the last of the Candarli. 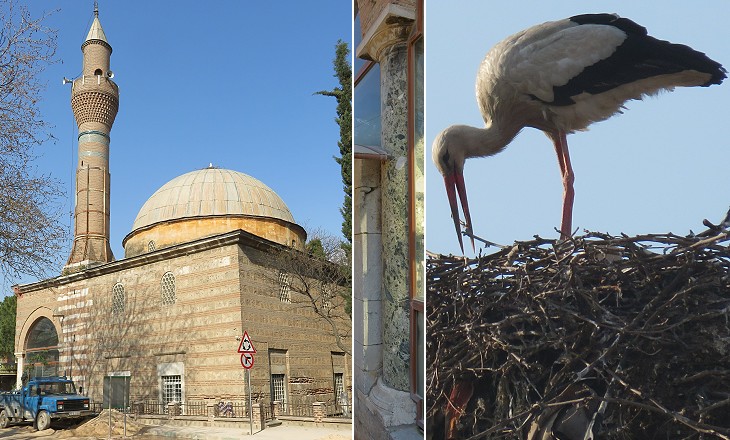 I saw at a mosque two most beautiful pillars in verd antique.
Richard Pococke - A Description of the East and Some Other Countries - 1745
The inscription above the door of the mosque indicates it was built by Mahmut Pacha, a vizier of Sultan Murat II, one of whose brothers was called Mahmut Celebi.
We ascended amidst gardens and orchards the hills which form the southern shore of the Gulf of Nicaea. (..) We saw several storks to day for the first time (March 23, 1836): the regularity with which these birds return to their summer quarters is a very curious fact as each successive year witnesses their return almost on the same day. (..) They are much protected by the Turks and, independently of the superstitious motive that a house on which they build is insured against fire, they are of great use to the peasant and the farmer by following the plough and devouring the grubs as they are turned up.
William Hamilton - Researches in Asia Minor, Pontus and Armenia - 1842 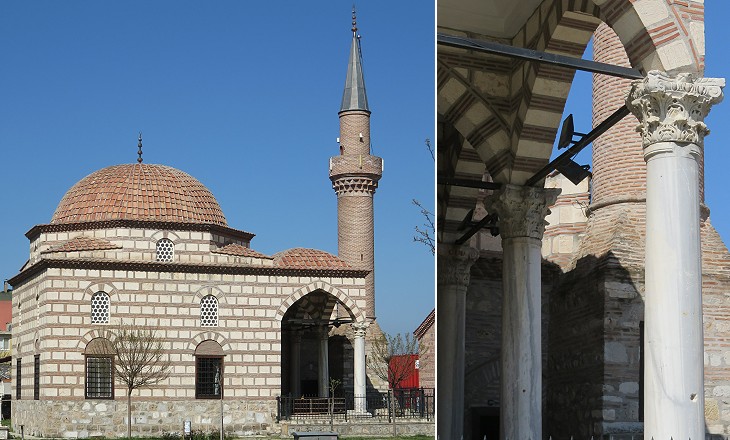 This mosque is named after a Sufi philosopher who died in 1418 (Seyh in this case means a holy person and not the leader of a tribe). It was greatly damaged in 1922 during the war between Greeks and Turks for the control of western Anatolia. In 1940 the portico collapsed so that the minaret was almost the only part of the building still standing. The dating of the mosque is unclear, but its construction was promoted by a Candarli grand vizier: either Ibrahim Pacha the Elder in 1421-1429 or Ibrahim Pacha the Younger in 1498-1499. 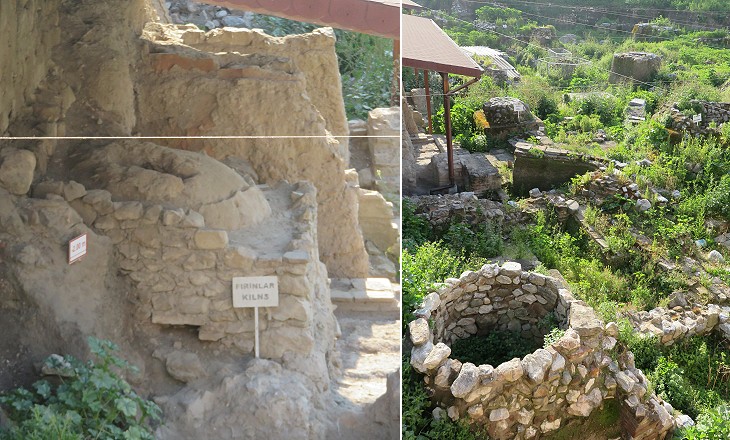 Kilns of the tile workshops

In 1514 Sultan Selim I relocated a number of artisans to Iznik from Tabriz, in today's Iranian Azerbaijan, who were skilled in the making of ceramic tiles. For maybe two hundred years the town was renowned for its tiles which were used for the decoration of all the main mosques of Constantinople (e.g. Rustem Pacha Camii). Eventually tastes changed and the workshops were closed down.
Iznik does not have a Cini Muzesi (Tile Museum) yet, but you can see some examples of its tiles at the Cinili Kosku in Istanbul and at the Cini Muzesi of Kutahya. 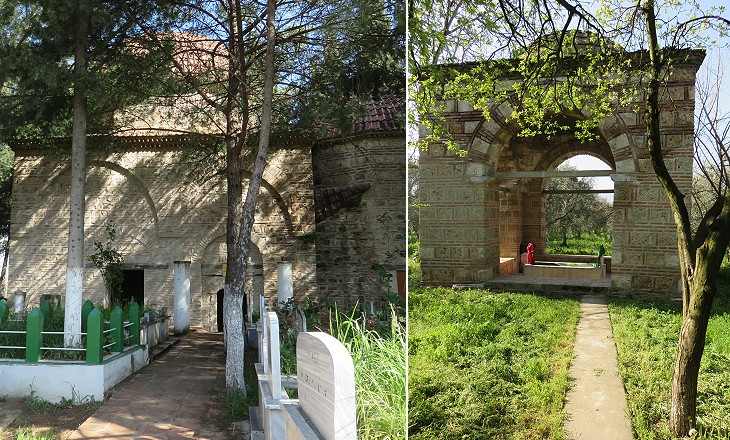 Turbe beyond the Eastern Gate

The prohibition to build tombs inside the City of Rome and the consequent construction of them along the main roads (e.g. Via Appia) had an influence on the Muslim practice of building turbe along the road leading to Mecca. This is very evident at Damascus and to some extent at Iznik too, because many turbe were built in the fields at the sides of the road which begins at the Eastern Gate. 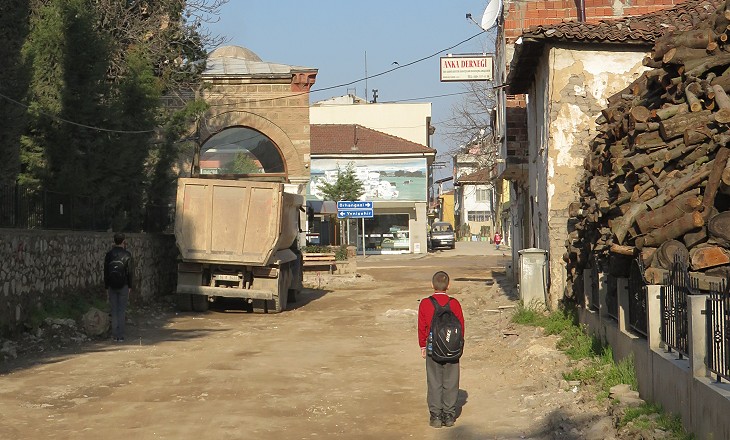 In Turkey pupils who are late on their way to school stop and stand to attention when they hear the national anthem announcing the beginning of the lessons (near Mahmut Celebi Camii at 8:32 a.m.)

Move to:
The Walls
The Gates
Roman and Byzantine Monuments