Ak Saray (White Palace) and the Monument to Timur

Shehri Sebz, previously named Kesh, is the native city of Timour, and renowned for the warlike character of its inhabitants. (..) On the invasion of the Mongols the Persian element was entirely supplanted, the Ozbegs every where seized the reins of government, and Timour, the lame conqueror (in Europe Timur the Lame, became Tamerlane) from Shehri Sebz, was satisfied with nothing less than making Samarcand the capital of all Asia.
Arminius Vambery - Travels in Central Asia in 1863
Chakhrisabz is a very ancient town, however its fame is mainly due to the fact that Timur was born there in 1336. He belonged to the family of a local chief. He eventually chose Samarkand as the capital of his empire, but he did not forget his hometown and in 1379 he commissioned a palace in Chakhrisabz after having conquered Khorezm, the region around Khiva.

Ak Saray - pillars of the portal; the image used as background for this page shows a detail of their decoration

The historic centre of Shakhrisyabz contains a collection of exceptional monuments and ancient quarters which bear witness to the city's secular development, and particularly to the period of its apogee, under the rule of Amir Temur and the Temurids, in the 15th-16th century.
From the UNESCO synthesis of the universal value of Shakhrisyabz which in 2000 was added to the World Heritage List.
A worn out inscription on the portal says: Those who have doubts about our power and munificence should look at our buildings . The central part of the portal is lost or more likely was never completed, but this adds to the evocativeness of the site; the two pillars remind those which once supported the main dome of Caracalla's Baths in Rome. The palace itself was never completed, with the exception of some halls.

The Ak-Sarai Palace construction began in 1380, the year following Temur's conquest of Khorezm, whose artisans were deported to work on the palace and provide its rich decoration. Although Samarkand may boast a great many Temurid monuments, not one can rival the Ak-Sarai Palace in Shakhrisyabz. The foundations of its immense gate have been preserved: this architectural masterpiece is outstanding in its dimensions and bold design. UNESCO
The decoration of Ak Saray has helped in the reconstruction/restoration of many monuments in Samarkand, in particular of Bibi Khanoum, the gigantic complex built by Timur some twenty years later. 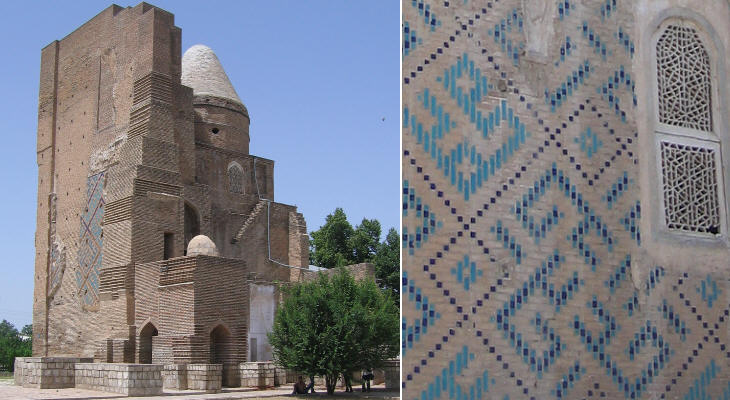 (left) Dorous Siadat/Dar al-Siyaday (Home of Sovereignty); (right) square Kufic inscriptions on the remaining pillar of the portal; they repeat four words: Allah ahad Muhammad samad: the first two words are written four times and form a swastika-like pattern; see similar inscriptions in the Mausoleum of Oljeitu in Persia which was completed in the early XIVth century and at Diyarbakir in Turkey

The Dorus Saodat is a vast complex which was destined as a place of burial for the ruling family and contained, in addition to the tombs themselves, a prayer hall, a mosque, and accommodation for the religious community and pilgrims. UNESCO
In 1375 Jehangir, Timur's elder son, died at the age of 22. His father commissioned a mausoleum for him; in 1394 Omar Sheikh, another son of Timur died and was buried next to his brother. Timur decided to build a chapel for himself next to that of his sons. He eventually decided to be buried in Gour Emir, the mausoleum he built in Samarkand for his preferred grandson.

Sheikh Chamseddin Koulyal Mausoleum and the tomb in its interior

Construction of elements continued in Shakhrisyabz throughout different time periods, lending a unique character to the place by the succession of different architectural styles. Despite the inroads of time, the remaining vestiges are still impressive in the harmony and strength of styles, an enriching addition to the architectural heritage of Central Asia and the Islamic world. UNESCO
Sheikh Chamseddin Koulyal was a spiritual advisor to Timur's father. Timur built a small mausoleum for him in 1373-1374. In 1437-1438 his grandson Ouloug Beg built an identical mausoleum next to it and a portal which linked the two buildings.

Kok Goumbaz Mosque and detail of its decoration (modern)

In 1435 Ouloug Beg built near the mausoleum a mosque which was meant to be the Friday Mosque of Chakhrisabz, but which is best known as the Gok (blue) mosque owing to the brilliant colour of its dome. The mosque was restored in 1994. This complex is aka as Dorout Tilovat (Home of Respect and Consideration). Chakhrisabz is located some sixty miles south of Samarkand.