In 1243 a Mongol invasion weakened the power of the Seljuk Sultans of Rum who from their capital Konya controlled most of the Anatolian tableland. In the following century a number of local beys (governors) established their own principalities which eventually included the remaining Byzantine territories along the Aegean Sea. The two most important principalities were those of the Karamanogullari, who were based at Karaman, and of the Osmanogullari, the founders of the Ottoman Empire, who set their capital at Bursa. 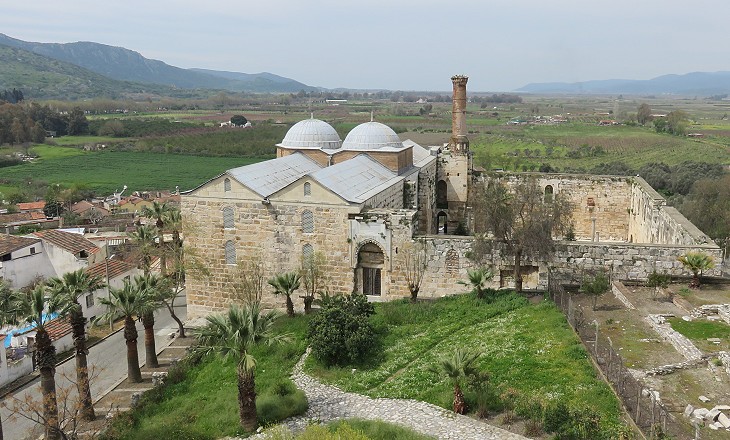 A quarter of a League from Ephesus you meet with another Mosquee, which was formerly a Christian Church, built out of the Ruines of the Temple of Ephesus. This Mosquee stands enclos'd with Walls, and you must ascend up to it by two Ascents of twelve Steps a-piece, which bring you to a large Passage.
Jean-Baptiste Tavernier - Travels through Turkey to Persia (in the 1630s-1650s)
The grand mosque is situated beneath the castle, westward. The side next the foot of the hill is of stone; the remainder, of veined marble polished. The two domes are covered with lead, and each is adorned with the Mahometan crescent.
Richard Chandler - An account of a tour made at the expense of the Society of dilettanti - 1775
The marble mosque which it is an error to suppose could ever have been a Christian church. The edifice is of Saracenic construction, and enriched with the appropriate ornaments of the wild and fanciful architecture of the East. It is situated on the western side of the hill, and forms a large square, the southern half of which contains a ruined mosque built entirely of marble, while the northern half which was left open, is now choked up with trees and bushes.
William Hamilton - Researches in Asia Minor, Pontus and Armenia - 1842
Four Turkish principalities were established along the Aegean Sea in ca 1300. They are listed north to south: the Karasids near the Dardanelles, the Sarukhanids at Manisa, the Aydinids whose administrative capital was at Ayasoluk and the Mentese who were based at Milas, in the territory of ancient Caria.
The Aydinids ruled Ayasoluk from 1308 to 1426 when they surrendered their territories to the Ottomans. Isa Bey Camii was built in 1374 by Aydinoglu Isa Bey. 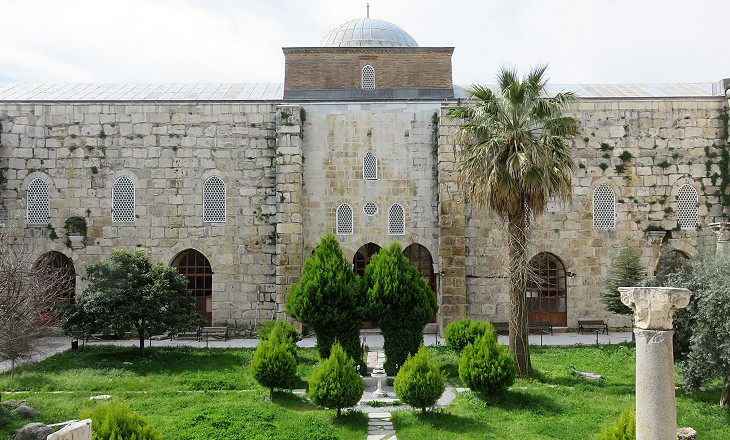 Isa Bey Camii: courtyard and front of the mosque

From thence you enter into a large Cloyster, the Arches whereof are sustain'd with Marble Pillars of several colours, delicately wrought and the lower part of the Gallery, which runs along three of the sides, that consists of great Squares of Stone. The Mosquee takes up the fourth side upon the left hand, the Gate being in the middle. Tavernier
In front is a court, in which was a large fountain to supply the devout mussulman with water, for the purifications required by his law. The broken columns are remains of a portico. The three entrances of a court, the door-ways of the mosque, and many of the window-cases have mouldings in the Saracenic stile, with sentences, as we supposed, from the Koran in Arabic-characters handsomely cut. The windows have wooden frames, and are latticed with wire. Chandler
Isa Bey Camii is one of the most important pre-Ottoman mosques of Turkey and it is larger than many of the mosques of the time. It had two minarets. The fact that the prayer hall is much wider than deeper (the ratio is 5 to 2) could be due to the influence of the Great Mosque of Damascus on its architect (Ali bin Mushimish) who came from that city. 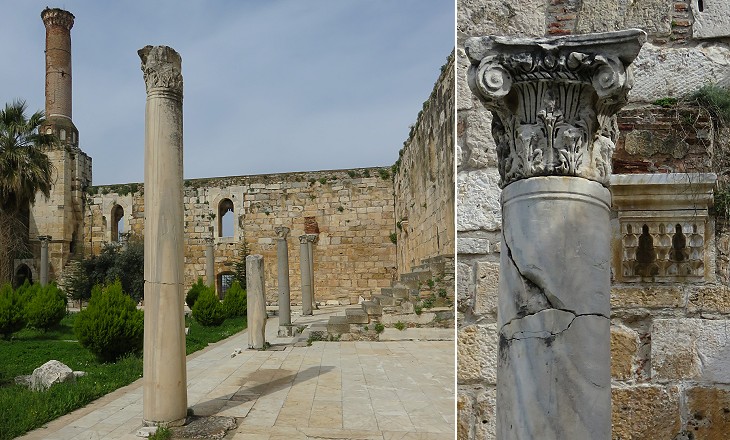 Isa Bey Camii: (left) ancient columns in the courtyard and the south-western minaret (the image used as background for this page shows a detail of its decoration); (right) a Corinthian capital

The grand mosque is situated beneath the castle, westward. In front is a court, in which was a large fountain to supply the devout mussulman (Muslim) with water, for the purifications required by his law. The broken columns are remains of a portico. The minaret is fallen.
Francis Vyvyan Jago Arundell - A Visit to the Seven Churches of Asia - 1828
While the minaret at the south-eastern corner of the courtyard is lost, the octagonal base and the cylindrical shaft of the other one are still standing. 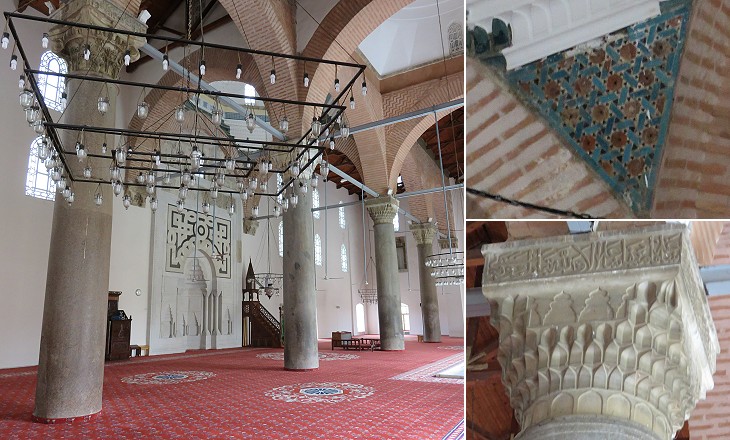 Isa Bey Camii: (left) interior with a modern mihrab in the wall indicating the direction to Mecca (qibla); (right) a squinch (an arched structure) of the mihrab dome and an Islamic capital with inscription

The Mosquee it self is a wide Arch, supported by five Columns, all of most exquisite Work. There are four of Marble, and every one of a different Colour but the fifth is a most rare piece, being of Porphyry, and the bigness of it makes it so much the more to be admir'd. Tavernier
The inside is mean, except the kiblé or portion toward Mecca, which is ornamented with carving, painting, and gilding. The minaret is fallen. The large granite columns, which sustain the roof, and the marbles, are spoils from antient Ephesus. Chandler
The interior is supported by four gigantic granite pillars supposed to have been derived from the Temple of Diana. Hamilton
Tavernier mentioned a porphyry column which later visitors did not find. Inside the prayer hall, the squinches of the mihrab dome are decorated with a mosaic of tiles with hexagons and star patterns in turquoise and navy blue. Due to a long period of neglect the building lost some of its original decoration. A door was cut through the qibla niche, and the mihrab was removed in the XIXth century when the mosque served as a caravanserai. 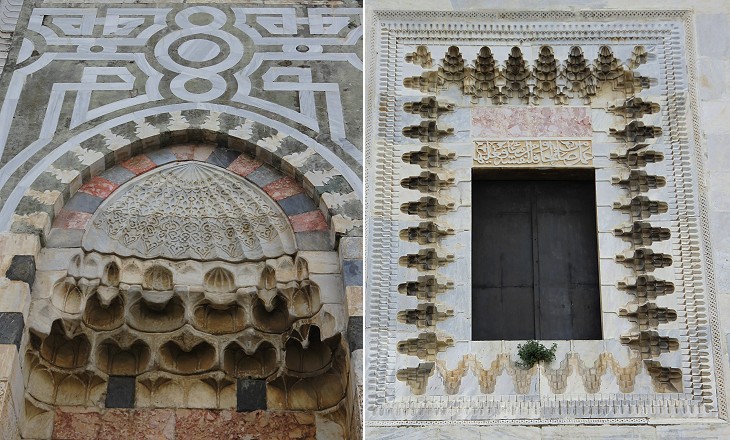 Isa Bey Camii: (left) detail of the main portal; (right) window at the side of the portal

The three entrances of a court, the doorways of the mosque, and many of the window-cases, have mouldings in the Saracenic style, with sentences, as we supposed, from the Koran, in Arabic characters handsomely cut. Arundell
The main entrance to the courtyard is from the monumental portal on its western façade. It is set on a slope with a double staircase that features a large niche under the landing. The portal has a highly elaborate decoration. The rectangular windows flanking it are decorated with thickly carved stone frames with inscriptions. The present village of Aiasaluck consists of half a dozen miserable huts and coffee houses where a few hard eggs and still harder bread are the only provisions to be obtained. Hamilton
The Hammam was built at the same time as the mosque and its entrance was preceded by a small peristyle marble courtyard. It appears its use was discontinued in the XVIth century and the surrounding area became a small cemetery. The town was almost abandoned after it was conquered by the Ottomans. 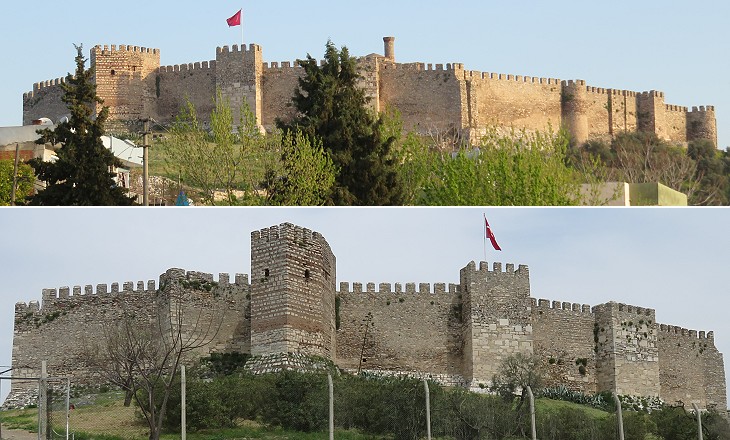 Fortress of Ayasoluk: views from the modern town (above) and from St. John's Cathedral (below)

We arrived at the village of Aiasolouk, to the north east of the ancient city of Ephesus, where I lodged in a kane, which served also for a stable, there being sophas and chimneys all round for the convenience of travellers. The Turk that conducted me made me sensible that it was necessary to make presents of coffee to two of the governors in the castle; and I spent three or four days in this place, viewing the antiquities.
Richard Pococke - A Description of the East and Some Other Countries - 1745
The ruins of the adjoining town, which arose about four hundred years ago, are entirely composed of materials from Ephesus, and these old castle and mosque walls have become in their turn our quarry for relics of antiquity. The few huts within these last-named ruins, which are perhaps a mile and a half from Ephesus, still retain the name of the parent city, Asalook.
Charles Fellows - Journal Written during an Excursion in Asia Minor in 1838 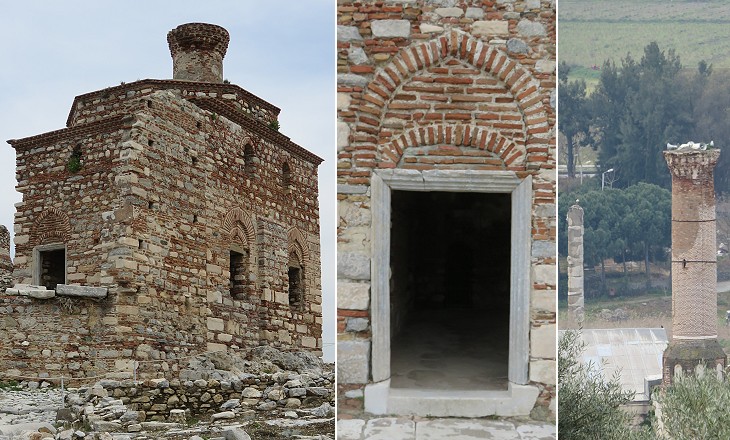 We entered an open plain in part cultivated and in part covered with Vitex agnus-castus (Chaste Tree); presently the picturesque and insulated hill of Aiasaluck appeared in sight crowned with a ruined castle and covered with the remains of the Turkish town which rose into existence when Ephesus was destroyed. Hamilton
The fortress retains faint traces of its heyday: a Byzantine church, a mosque, a residential area with baths, barracks and underground cisterns. It was widely restored in recent years and it is now open to the public with access from St. John's Cathedral. 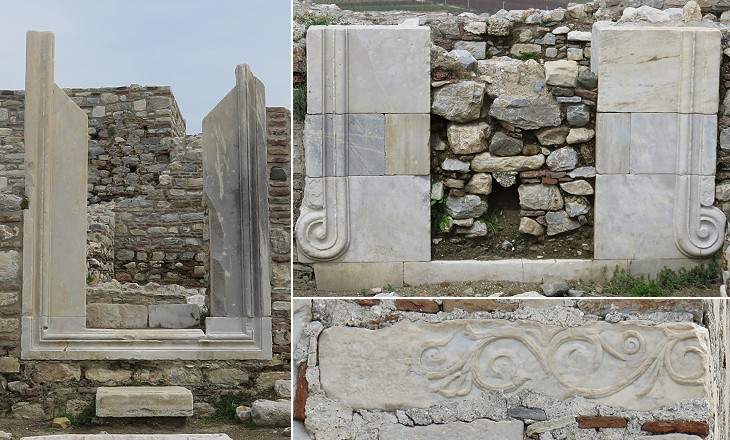 Ayasoluk: ancient reliefs and frames utilized for the buildings inside the castle

Many other fragments of ancient architecture have also been used in the wall which surrounds the hill at a lower level than the Turkish castle. This is another proof of the error of charging upon the Turks the destruction of all the celebrated monuments of antiquity. Undoubtedly they often have aided and still continue to help on the work of annihilation, but the first blow was struck by the ignorance and the bigotry of the Byzantine Christians and for this the only excuse is that it was done during a period of universal oppression and when ignorance and bigotry overran even the most civilized portion of the globe. Hamilton