Jan. 31 1800. We entered upon a ridge branching eastward from the great mountains on our right, and forming the northern boundary of the plain of Konia and we saw the city with its mosques and ancient walls, still at the distance of 12 or 14 miles from us. To the north-east nothing appeared to interrupt the vast expanse but two very lofty summits covered with snow, at a great distance. They can be no other than the summits of Mount Argaeus above Kesaria, and are, consequently, near 150 miles distant from us, in a direct line. To the south-east the same plains extend as far as the mountains of Karaman.
William Martin Leake - Journal of a Tour in Asia Minor - 1824
(1836) At length, about half-past one, the gardens and minarets of Koniyeh appeared in sight, distant eight or nine miles. It was an Oasis in the desert, the gardens appearing like a dark green narrow mass, extending from the hills into the plain, and gradually thinning out and ceasing as the supply of water by which they were irrigated is exhausted; for no indications of verdure can be seen except in the immediate vicinity of water. As we approached the town over the dusty plain, impassable in wet weather from the mud, a few corn-fields and vineyards occasionally occurred.
William Hamilton - Researches in Asia Minor, Pontus and Armenia - 1842
November 16th. 1837. We entered thence a pass amid low hills, beyond which was the plain of Koniyeh, along which we travelled three hours, always in sight of the city of the Sultans of Rum, before we reached it. (..) Koniyeh, as one of the great cities of Asia Minor, not far from Smyrna, and on the great road, has been much visited by European travellers, who have each, from the days of Niebuhr to those of Colonel Leake and Mr. Hamilton, contributed their remarks upon its past and present condition.
William F. Ainsworth - Travels and Researches in Asia Minor, Mesopotamia, Chaldea, and Armenia - 1842

We learn from Cicero's Letters to Atticus, that Iconium was a place of considerable importance in his time, as he spent ten days there, on his progress into Cilicia. The most interesting circumstance attached to the history of Iconium is the preaching of Paul and Barnabas in the Jewish synagogue. Hamilton
The ancient town of Iconium was located along the trade route which linked the ports on the Aegean Sea to Persia and Syria. During the Roman rule its name was changed to Claudioconium in honour of Emperor Claudius and later on to Colonia Aelia Hadriana in honour of Emperor Hadrian, but these names did not last. Memories of the Roman period are less frequent in the Anatolian tableland than on the Aegean/Mediterranean coast. Ankara and Aizani retain some interesting monuments, but in other ancient towns of the tableland one must go to the local archaeological museum to find works of art. In that of Konya there is an extraordinary sarcophagus portraying Hercules' labours. It is included in a class of sarcophagi named after Sidamara, an ancient town near Karaman. In these sarcophagi (see a list of sarcophagi in this website) the reliefs are placed inside niches and are separated by columns in order to create a sort of temple.

The fortunes of the town were most varied, but it was not till it became the residence of the Turk Sultans of the Seljukiyan family that it attained all its eminence and grandeur. Ainsworth
The importance of Konya grew when the Seljuks made it the capital of the Sultanate of Rum, which included most of western and central Anatolia. In 1134 Iconium was renamed Konya. Sultan Alaeddin Kayqubad bin Kaykaus (who ruled the country between 1220 and 1237) fortified the town and built a palace and a large mosque on the hill at its centre. 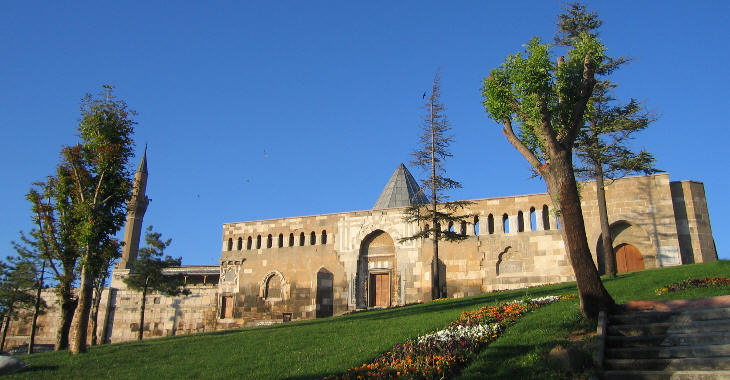 The Itch Kaleh, which stands in the centre of the town, is fast crumbling to pieces; the stone facings of the walls have been removed, probably to build the Pacha's konak, and the walls themselves are rapidly decaying: on the summit of the castle hill is a mosque, built by Sultan Alettin, and named after its founder. Hamilton
Sultan Alaeddin Kayqubad expanded the Sultanate to the east well beyond Sivas and to the north towards the Black Sea. He controlled part of the Mediterranean coast where he strengthened the fortifications of Alaye (Alanya), which became his winter residence and was named after him. 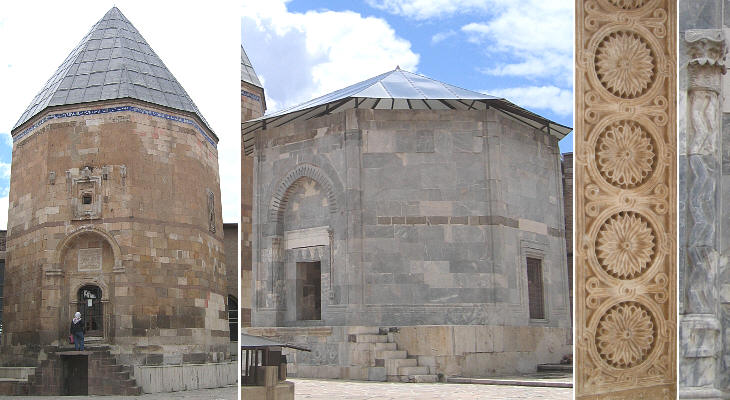 Sultan Alaeddin Kayqubad built a wall which surrounded his mosque and two existing turbe (mausoleums): that built by Sultan Kilij Arslan II, who ruled from 1156 to 1192, contains the tombs of many sultans and is still the object of devotion. The other one was built by Sultan Kaykaus I (1211-20) but it was not finished. It is called Adsiz Turbe (mausoleum of the unknown) because the memory of the names of those buried within has been lost. Kilij Arslan II Turbe is a typical example of a Seljuk kumbet, a tomb with a high conical/pyramidal roof. Kumbets can be found in all the towns which belonged to the Sultanate of Rum and in particular at Kayseri.

Alaeddin Camii - details of the wall surrounding it

The castle itself has also nearly disappeared; and the ruined walls alone mark its former extent, part of which is now converted into a burial-ground. Hamilton
It is to the Mohammedan period that the town owes the most remarkable of its existing remnants, the most striking of which are its jamis. (..) The style and decorations of these jamis are often very beautiful, and constitute graceful and finished specimens of Saracenic architecture. Ainsworth
The decorated entrance to the mosque/turbe complex faced the palace where the sultans of Konya had their residence. This building with the exception of a short wall is entirely lost. The whole hill which was the citadel of Konya is now a public garden and Alaeddin Camii is surrounded by cay bahcesi (tea gardens).

The Sultans of Konya avoided the depiction of living beings in mosques and other religious buildings, but they decorated their palaces with many reliefs portraying human beings and animals. They adopted the double-headed eagle of the Byzantine Emperors as their own symbol (it is now the symbol of the City of Konya). They often used a lion as their military coat of arms (see the banner of the Mentese Emirs at Becin Kalesi). While some reliefs have a clear Byzantine origin, others show an Indian influence (through Persian art). 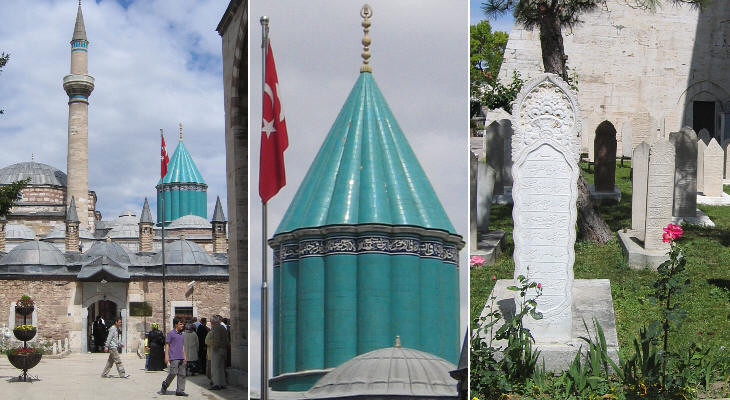 Mevlana monastery: (left) entrance to the monastery; (centre) the main turbe (also in the image used as background for this page); (right) a graveyard

In this town is the mausoleum of the pious shaykh Jalal ad-Din, known as Mawlana (Our Master). He was held in high esteem, and there is a brotherhood in Anatolia who claim spiritual affiliation with him.
H. A. R. Gibb - Selection from the Travels of Ibn Battuta in 1325-1354
The most remarkable building in Konia is the tomb of a saint, highly revered throughout Turkey, called Hazret Mevlana, the founder of the Mevlevi Dervishes. His sepulchre, which is the object of a Mussulman pilgrimage, is surmounted by a dome, standing upon a cylindrical tower of a bright green colour. The city, like all those renowned for superior sanctity, abounds with Dervishes, who meet the passenger at every turning of the streets, and demand paras with the greatest clamour and insolence. Leake
In the journal of the sixth campaign of Suleiman (1534), we find the Sultan halting here to visit the tomb of Mevlana Jelalu-d-din Rumi, author of the Mesnavi, a much-admired ethical poem in Persian, and head of the Mevlavi order of Dervishes. Ainsworth
Konya's most famous monument is the Yesil Turbe (green mausoleum) where Mevlana Jalal-ad-Din Muhammad was laid to rest. He was the founder of the Mevlevi Order, known as the Whirling Dervishes. He was born in the eastern part of Persia, or in Afghanistan or in Tajikistan. His father moved to Anatolia and settled in Karaman until in 1228 Sultan Alaeddin Kayqubad invited him to become the head of a medrese in Konya. Mevlana inherited his position; because he lived in Konya, the capital of the Sultanate of Rum, he became known as Rumi and today in the western world he is usually referred to by this name. The mausoleum is part of a large complex of buildings of the Ottoman period. 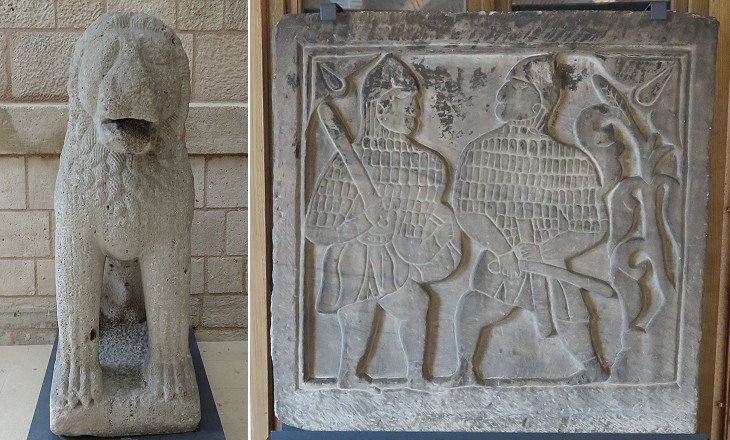