- Baroque Istanbul
(inscription on a gate opposite Topkapi Sarayi)

In September 1730 a popular revolt forced Sultan Ahmet III to abdicate in favour of his nephew Mahmut who ruled over the Ottoman Empire for the following 24 years. During his long reign Sultan Mahmut I had to face threats from Austria, Russia and Persia; the last wars with Austria (1683-1697 and 1714-1718) had shown that the Ottoman military required reforms. For this reason Claude Alexandre, Comte de Bonneval, a French army officer who had fought with Prince Eugene of Savoy, offered his services to the Sultan; he was immediately charged with the command of the artillery corps. The changes introduced by Bonneval showed their effects during the Austro-Turkish War of 1737-1739 at the end of which the Ottoman Empire regained possession of Belgrade. 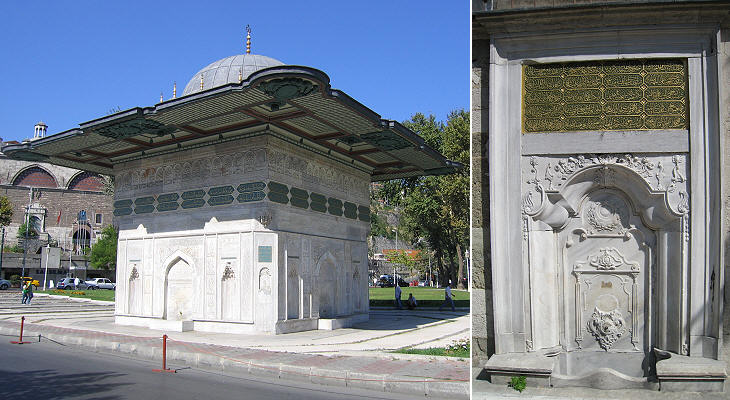 The XVIIIth century is described by historians as a period of stagnation for the Ottoman Empire; from an artistic point of view it was the "fountain period", because sultans and grand viziers promoted the construction of many fountains and in particular of sebil, where passers-by were offered glasses of water. The first monumental fountain was built by Sultan Ahmet III in front of the entrance of Topkapi Sarayi.
Sultan Mahmut I built a similar fountain near Tophane-i Amire, the cannon foundry. 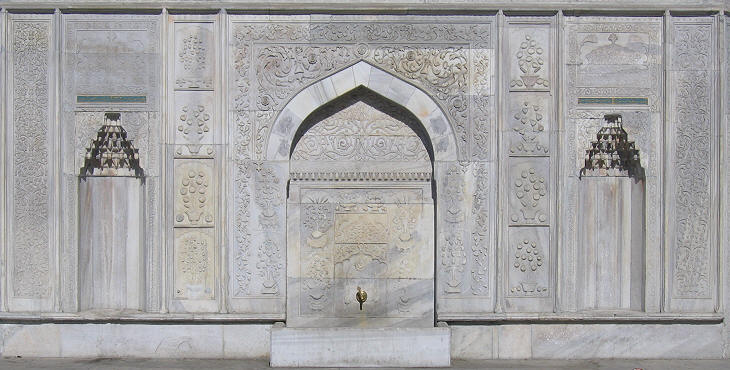 Tophane Cesmesi: detail of its western side

The marble panels decorating the fountain were chiselled with reliefs; these are very elegant, but they are not very evident because the depth of the projecting images is very shallow; they were made more visible by being painted and gilded. 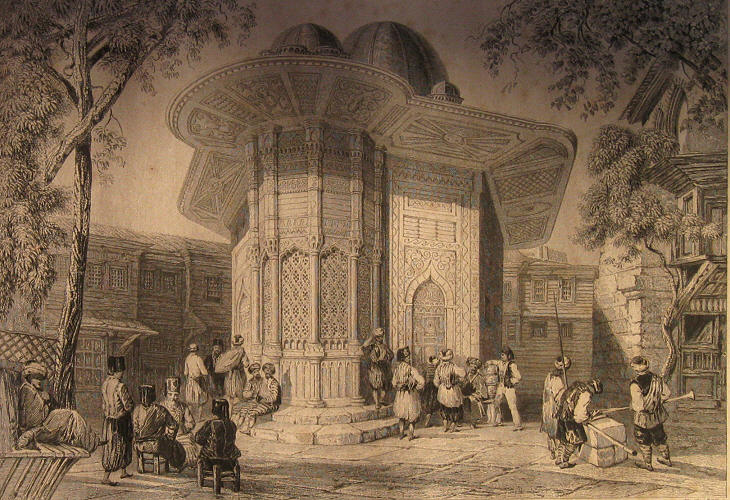 While the fountains built by Sultans Ahmet III and Mahmut I had a plain rectangular shape, that built shortly after by Saliha Valide Hatun, the Queen Mother, was characterized by a more elaborate design and by an elegant sebil. It is usually named after nearby Azap Kapi Camii, although some sources still refer to it as Saliha Sultan Cesmesi. 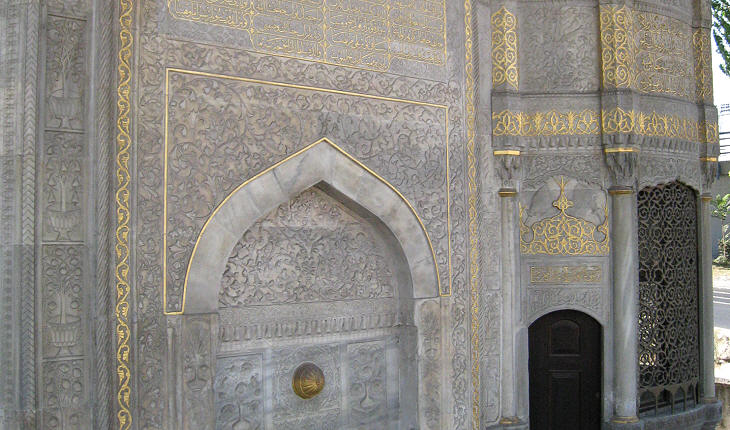 According to a popular story, when Saliha was a little girl she was noticed by Turhan Hatice Sultan near the small fountain which at that time existed near Azap Kapi Camii. Saliha was crying because she had broken the jug she used for carrying water; Turhan Hatice Sultan was impressed by the little girl and arranged for her to live at the Harem, where later on she married Sultan Mustafa II. When she became Queen Mother, Saliha did not forget the event which marked her destiny and funded the construction of a monumental fountain. She wanted to be buried with her former patroness in Turhan Hatice Turbesi. 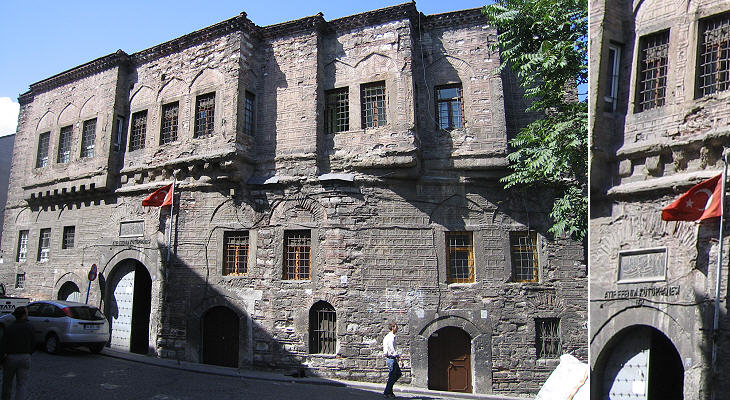 Sultan Ahmet III was a cultivated patron of literature and art, and it was in his time (1703-1730) that the first printing press authorized to use the Arabic or Turkish languages was set up in Istanbul (while the printing press had been introduced to Istanbul in 1480, all works published before 1729 were in Greek).
Atif Mustafa Efendi was a court poet during the reign of Sultan Mahmut I; he funded the construction of a public library, which still serves its original purpose. It is located near Vefa Kilise Camii. 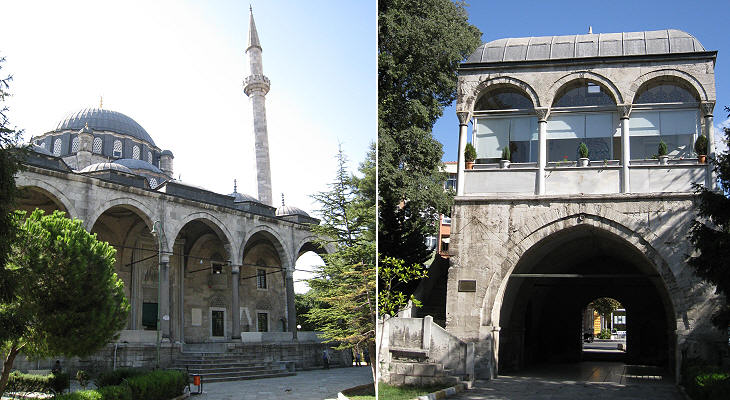 Hekimoglu means the doctor's son; we know that the father of Hekimoglu Ali Pacha was a Venetian: his son was three times Grand Vizier and during the intervals between each appointment he held other important positions; as governor of Bosnia he repelled the Austrian attack during the 1737-1739 war and as governor of Trebizond he strengthened the defence of the region which was threatened by the Persians.
He built a large complex on the Seventh Hill: its size can be compared to those built by the sultans: he was even allowed to include in it a royal loggia, something which was usually built only in a complex founded by a Sultan. 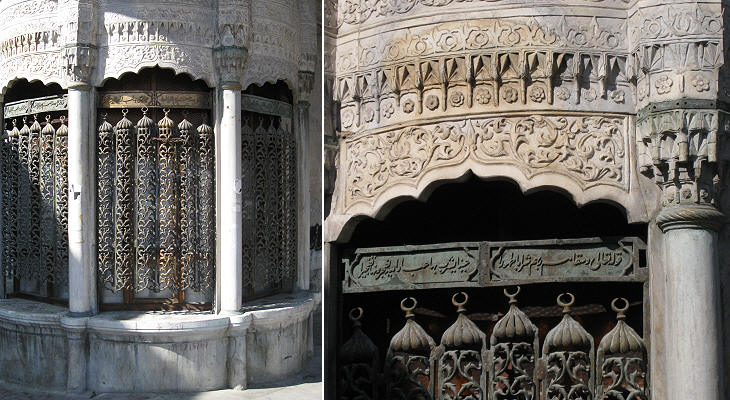 While the decoration of the fountains at Tophane and Azap Kapi were mainly based on fruit baskets and vases of flowers, that of the sebil at this complex shows vines and rosettes which are evocative of French rococo. Its beautiful grill is shown in the background of this page. 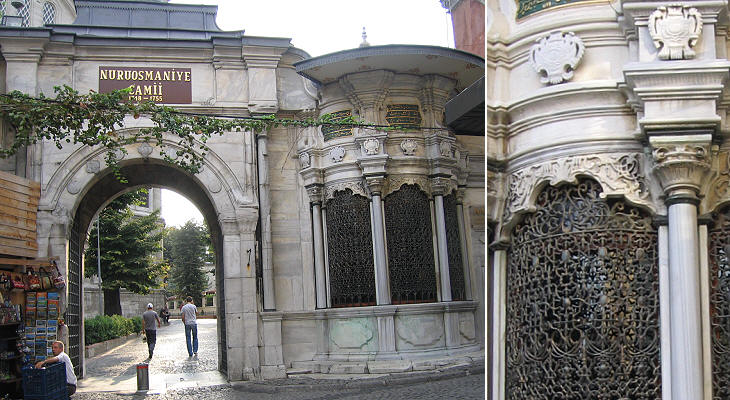 Nuruosmani means Light of Osman and it is the name given to a large complex built by Sultan Mahmut I, but completed by his stepbrother Sultan Osman III (1754-1757). The latter justified giving his name to the complex by pointing out that Nuruosmani also meant "Light of the Ottomans" and he placed an inscription inside the dome which reads: "God is the light of the heavens and the earth". Apart from having given his name to the complex, little else is remembered of this sultan. 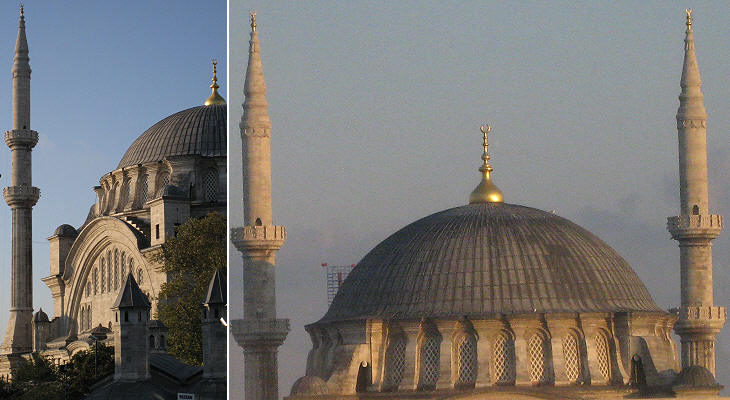 The Osmanie was begun by Mohammed IV. toward the close of the last century. At his death it was unfinished, but afterward completed by his brother Osman III. who gave it his own name. The dome covers the whole, without piers or columns, and has an extremely light elevation.
James Dallaway - Constantinople Ancient and Modern with Excursions to the Shores of the Islands of the Archipelago and to the Troas - 1797
The dome stands on four monumental arches and it is not surrounded by semi-domes as in the mosques of the previous centuries. 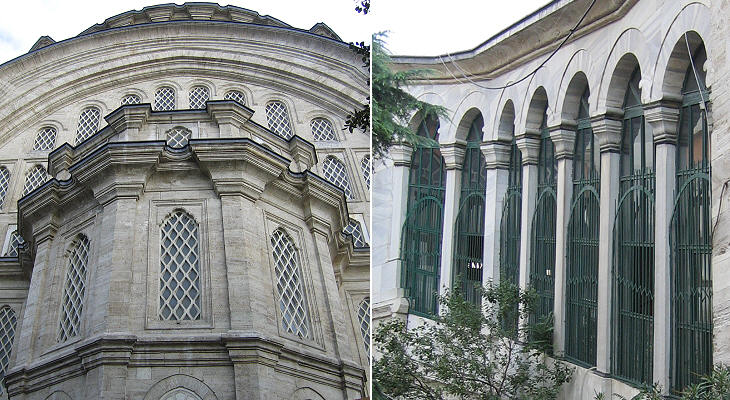 He had a good taste in architecture; and having procured designs of the most celebrated European churches, wished to have adopted the plan of one of them, but was dissuaded by the ulemah. Dallaway
The adoption of western design elements is evident in many details such as pilasters and cornices and in the very unusual curved steps. 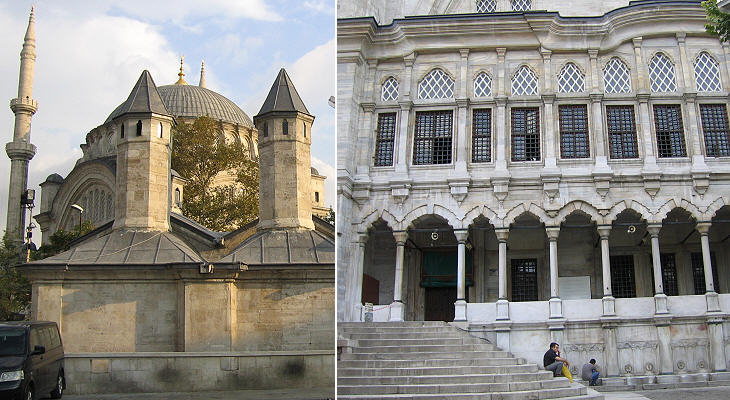 In the XVIIIth century the practice of strangling all the brothers and stepbrothers of a newly appointed sultan was abandoned; yet the life of a prince was not a happy one; for the whole reign of his elder brother (24 years) Osman III was kept in the Kafes, (the cage), a section of the Harem where possible successors were confined under a sort of house-arrest. This practice was one of the causes of the Empire's decadence, because when a prince eventually succeeded his brother, he had no preparation to run the country and little knowledge of the world outside the Harem. 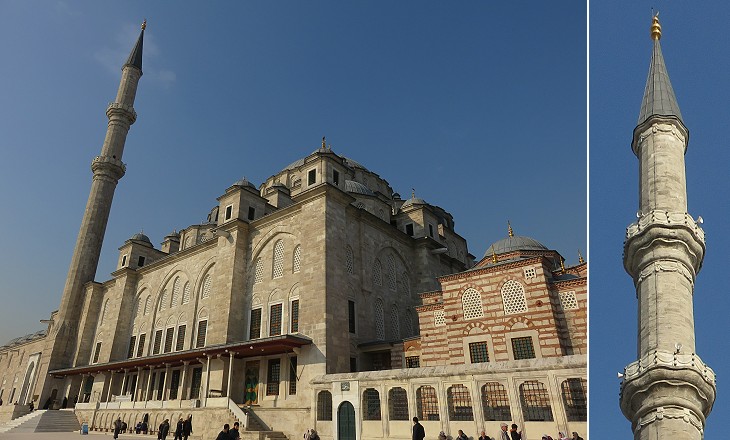 In 1766 the dome of the mosque built by Sultan Mehmet II in 1463-1471 collapsed. Mustafa II, the reigning sultan decided to rebuild it entirely with a completely different plan, much resembling that of Sultan Ahmet Camii. The curvilinear design of the minaret balconies is another example of the influence of western architecture. 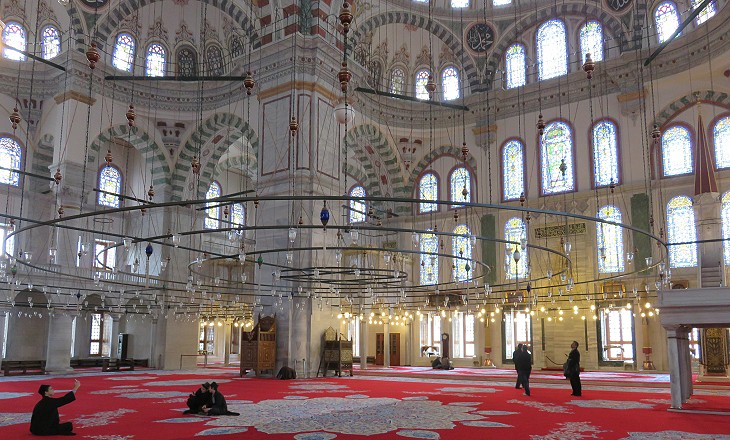 The interior is rather bare and without tile decoration, but, owing to the commanding position of the building at the top of the Fourth Hill, it receives a lot of light. The mosque is situated in the Fanar neighbourhood which was inhabited by Greeks until the 1920s. Today instead it is the home of the most tradition-oriented Muslims of Istanbul. The side parts of the mosque are used as religious schools, but pupils, although wearing a fez with the tughra (calligraphic monogram) of Sultan Mehmet II as symbol of their religious identity, profit from intervals between lessons for making "selfies" (see enlargement - it opens in another window). 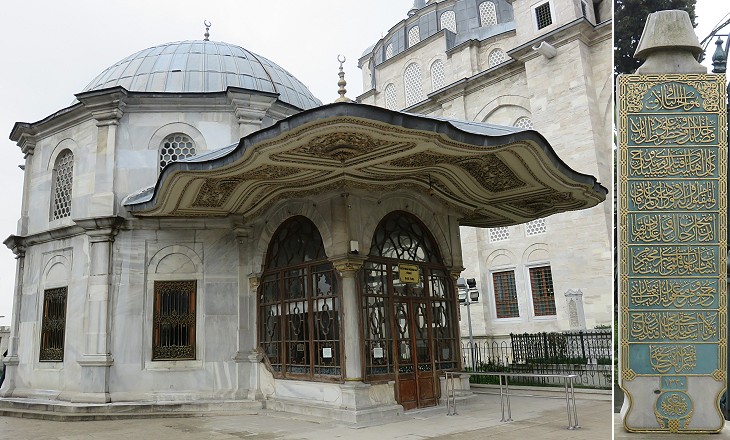 The turbe (mausoleums) of Sultan Mehmet and his first wife Gulbahar Hatun were rebuilt; the former according to the prevailing style at the end of the XVIIIth century, the latter in its original design. New sultans used to visit the Conqueror's turbe as part of coronation ceremonies. Especially during the last years of the Ottoman Empire many members of the upper classes chose to be buried next to their ancient leader. 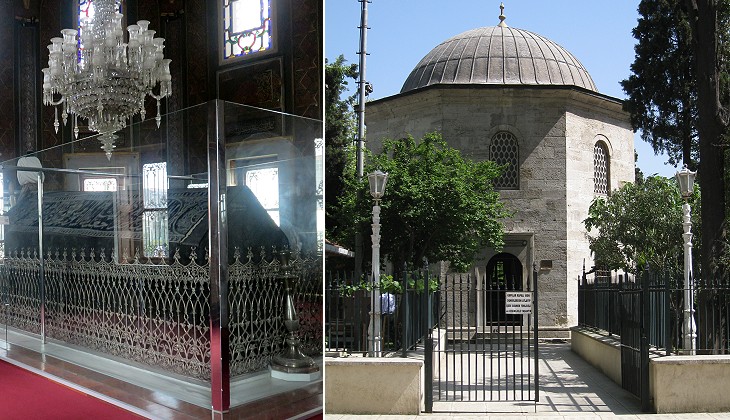 In 1924 visits to this and other sultan tombs were forbidden, but today Fatih Turbesi is the object of a continuous pilgrimage, whereas not many pay their respects to the tomb of Gulbahar Sultan. This is perfectly understandable considering that Sultan Mehmet II is regarded as a national hero, but perhaps a legend plays a role in this attitude. It says that Gulbahar was Christian by birth and, although in a concealed way, she remained faithful to her original belief. Sultan Mehmet II married her in 1446 at Manisa when they were both aged fourteen. She was the mother of Sultan Beyazit II. 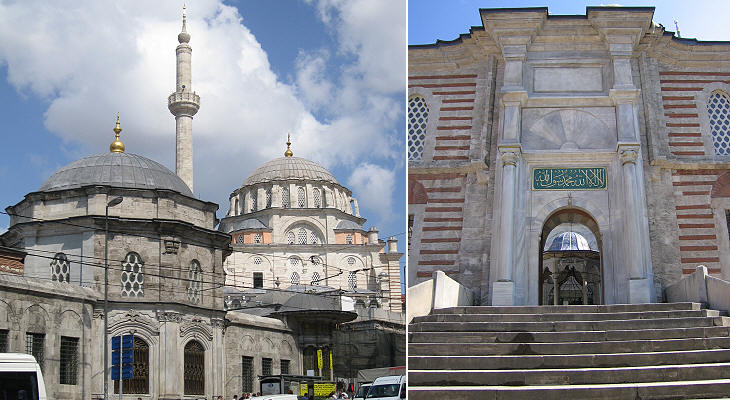 Sultan Mustafa III (1757-1774) had to face the growing threat of Russia where Empress Catherine the Great made no mystery of regarding the Russian tsars as the heirs of the Byzantine emperors. A small Russian fleet was sent to the Mediterranean Sea; it defeated the Ottomans at Cesme. In the 1774 Treaty of Kucuk Kaynarka which ended the war, the Ottomans had to agree not only to ceding territories in Ukraine and along the Black Sea, but also to recognize Russia as the patron of Orthodox Christians living in the Ottoman Empire.
Maybe because the memory of Sultan Mustafa III is associated with a lost war, the large complex he built is usually called Laleli (of the tulip) Camii, after a fountain by the same name which stood near the mosque. 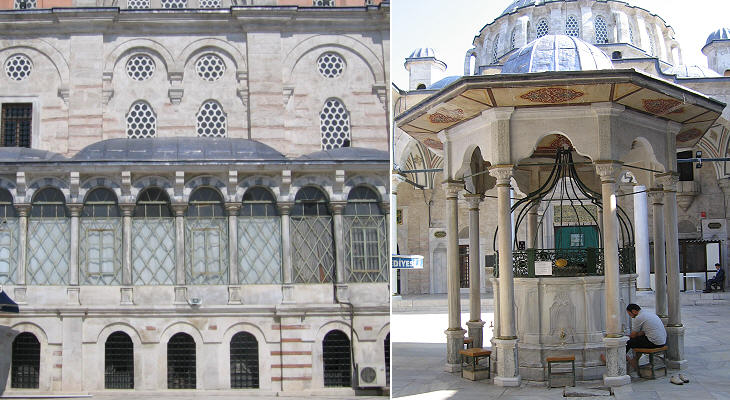 A small, but most elegant, mosque is called Laleli, or the tulip. It is completely wainscoted with veneered marble. Dallaway
Laleli Kulliye is the last royal complex which was built in Constantinople and it follows the pattern established at Nuruosmaniye a decade earlier.
The mosque and the imaret are located on a high base surrounded by walls. The sebil and the turbe of Sultan Mahmut III flank the southwest gate. The monument original context was modified by the enlargement of the street to its south. The dome of the mosque is about half the size and height of the dome at Nuruosmaniye. It is placed above an octagonal drum and is surrounded by semi-domes. In the walls layers of bricks alternate with layers of cut stone, a technique which goes back to the early days of Constantinople. 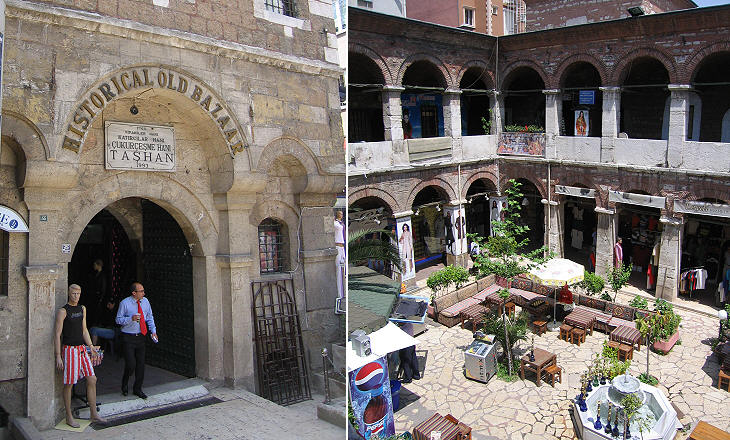 There are also several large kanes, where many merchants live, and most of these have apartments in them, where they spend the day, and retire at night to their families in their houses.
Richard Pococke - A Description of the East and Some Other Countries - 1745
Laleli Kulliye included a medrese and a hammam which no longer exist; the institution most likely could rely on the revenue produced by a nearby han; it was named after a fountain and nowadays is better known as Tashan because of its white stones (tas); it is small, but pretty with many shops.

Sultan Mustafa III built at Uskudar a mosque in memory of his mother; however because at Uskudar there were already two kulliye named after a Valide Sultan (Queen Mother), this building is known as Ayasma Camii because it was located near an ayasma (a spring regarded as sacred by Orthodox Greeks). The design of the dome is very similar to that of Nuruosmaniye. 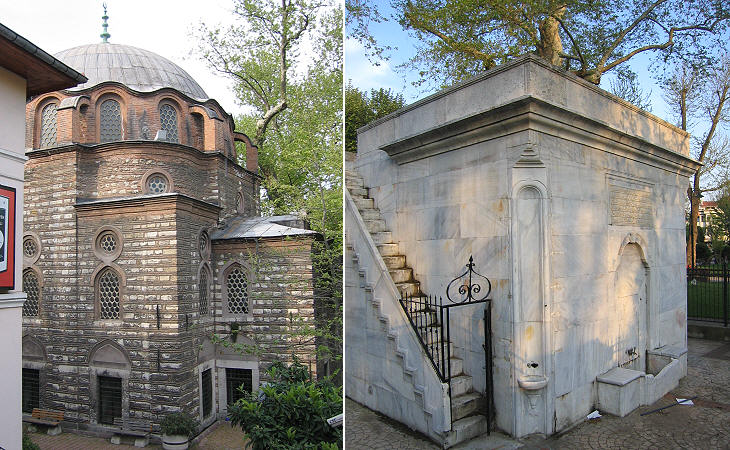 Zeynep Sultan was a daughter of Sultan Ahmet III who commissioned a mosque which has the appearance of an early Ottoman building with an almost Byzantine dome.
An unusual monument of that period was built by Esma Sultan, another daughter of Sultan Ahmet III. Namazgah is an open-air mosque consisting of just the podium for preachers which also serves to indicate the direction of prayer.