A View from the Past 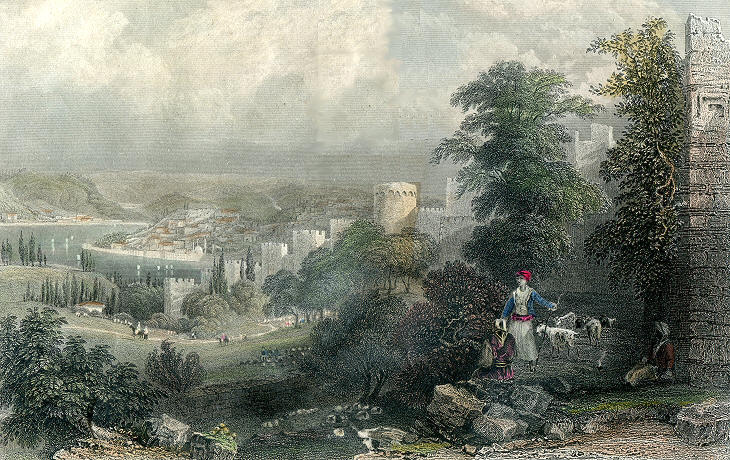 1838 coloured engraving (T. Allom - J.C. Bentley) showing the walls going down to the Golden Horn which are covered in this page

A great road runs in a parallel direction with the wall, and affords a striking view, almost for the whole extent, of this vast structure, which is diversified by picturesque ruin, and trees growing in the foss, of great beauty and variety.
James Dallaway - Constantinople Ancient and Modern with Excursions to the Shores of the Islands of the Archipelago and to the Troas - 1797 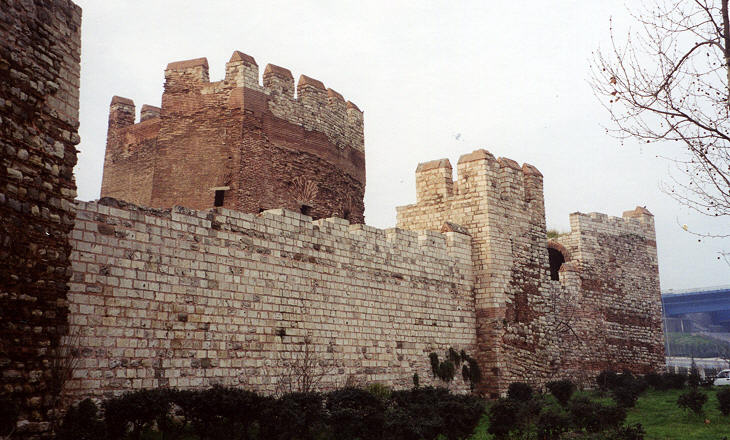 Heraclius had to sustain the siege of the Avars in 626 and Leo III that of the Arabs in 718. Based on the experiences they made during these sieges, they modified the initial stretch of the walls from the harbour (i.e. the Golden Horn), which therefore does not follow the general pattern. This section was very important because it protected the Palace of Blachernae where the Byzantine emperors often stayed before the Xth century and which afterwards became their principal residence. The palace included a church which housed a holy spring. Two large adjoining square towers were built in the XIIth century to strengthen the defence of the imperial palace. That to the left is known as the tower where Anemas, a Byzantine commander charged with plotting against Emperor Alexios I Komnenos was imprisoned in 1107. The other one was built by Isaac II Angelos (emperor from 1185 to 1195, and again from 1203 to 1204). Ancient columns were utilized for the construction of its upper storey. As a matter of fact the towers were useless because in 1204 the Crusaders of the Fourth Crusade entered the palace from the city side, after having seized some towers of the maritime walls and opened three gates to let their comrades in. 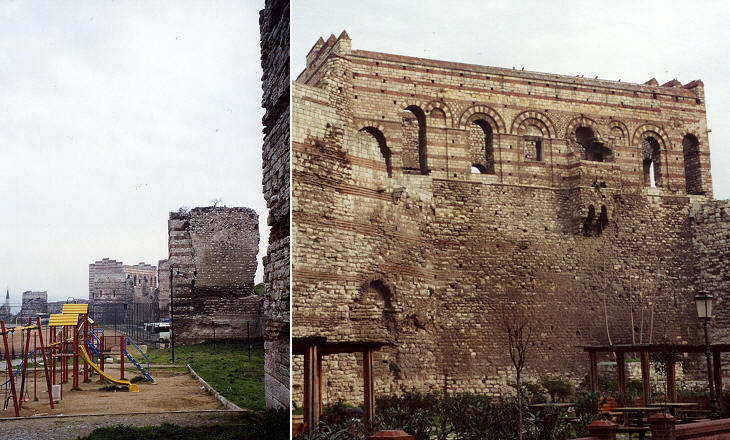 (left) The walls near Tekfur Sarayi; (right) the main remaining wall of the palace

What they call the palace of Constantine, close to which the walls are built on the sixth hill, seems to have been only one room with the roof supported by pillars, though now it is divided, and made into two stories; it does not seem to be of great antiquity; and is probably a Genoese building, as there are coats of arms over the windows.
Richard Pococke - A Description of the East and Some Other Countries - 1745
In 1261 Michael VIII Palaiologos restored a Byzantine dynasty on the throne of Constantinople. Constantine, one of his sons, built a new, small palace near that of Blachernae which had been too badly damaged in 1204. Because Constantine was born in the city he was called porphyrogenitus (purple-born, a title given to emperors who were born in a porphyry-decorated room in the imperial palace and more in general to those who were born when their fathers were already emperors) and the building was known as the Palace of the Porphyrogenitus. Turkish Tekfur means sovereign. 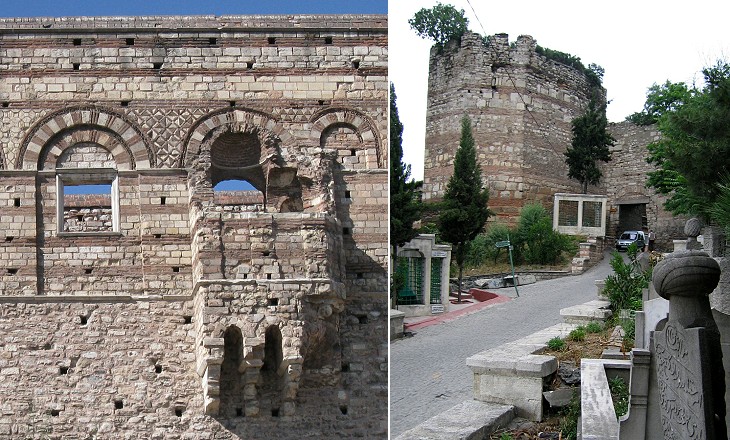 (left) Details of the brickwork decoration of Tekfur Sarayi; (right) Ottoman cemetery near Egri Kapi with the tomb of a companion of the Prophet who died there during the first Arab siege of the city in 674-678

The walls of Tekfur Sarayi are the main remaining example of a Byzantine palace in Constantinople, the imperial palaces of Blachernae and that near the Hippodrome being buried under the houses of a heavily populated neighbourhood (the former) or under Sultan Ahmet Kulliyesi (the latter).
A small gate near Tekfur Sarayi was called Kaligaria by the Byzantines because it was situated near the workshops of boot-makers (kaliga). It is now known as Egri Kapi (Crooked Gate), because of a bend in the street leading to it. According to some Turkish historians it is the gate which in 1453 was left inadvertently open. Some Ottoman soldiers reached the top of the nearby tower and first flew their red flag on the walls. 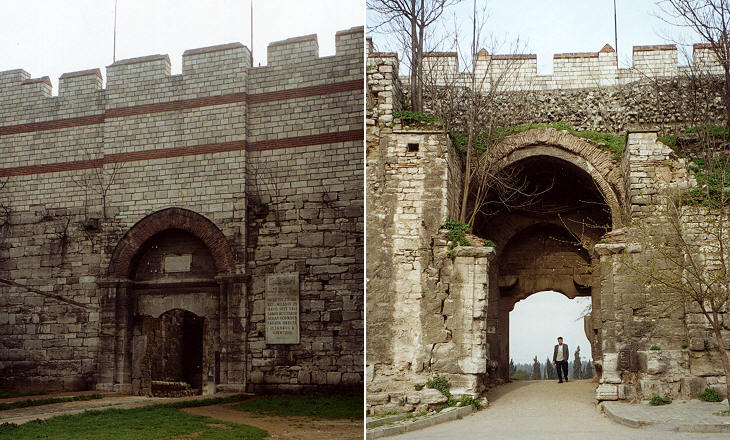 This gate is situated at the highest point of the walls on the road leading to Adrianople (Edirne) which in 1363 became the capital of the Ottoman Empire. In 1453 Sultan Mehmet II made his triumphal entrance into the city through this gate. 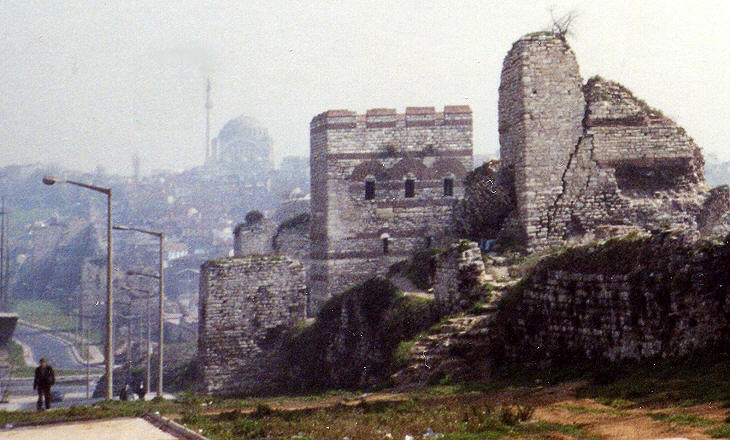 In 1453 the fiercest fights between the attackers and the defenders occurred in this section of the walls. Notwithstanding his appeals for help to European nations Emperor Constantine XI could rely only on his small army of 5,000 and on 2,000 Venetians and Genoese who volunteered to fight by his side.

This small gate was renamed Hucum Kapisi (Gate of the Assault) by the Ottomans because according to some accounts their first troops entered the city through it. Byzantine chronicles say that Emperor Constantine XI made a last attempt to halt their advance at this gate. He had repeatedly refused to save his life by repairing to Mistras in Greece, his last possession outside Constantinople. 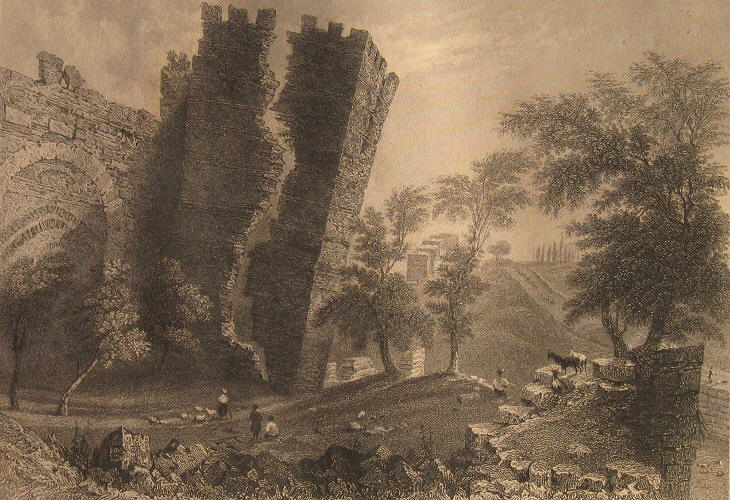 W. H. Bartlett's engraving showing the tower to the right of Hucum Kapisi before it collapsed (ca 1838)

The death of Emperor Constantine XI is reported in many chronicles, but they do not agree on many details about how it occurred. According to a legend which was very popular during the Greek War of Independence (1821-1832) and until the 1920s he was saved by an angel in order to lead in the future the liberation of Constantinople from the Ottomans.

This is the last year, this the last
of the Greek emperors. And, alas,
how sadly those around him talk.
Kyr Theophilos Palaiologos
in his grief, in his despair, says:
"I would rather die than live."

Life in the Walls 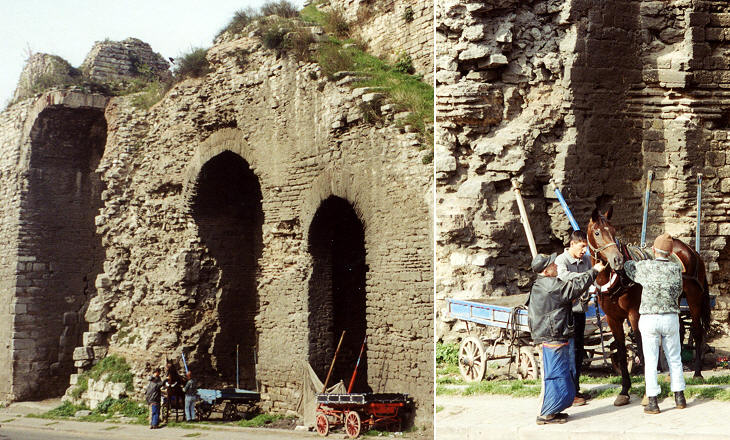 The inner walls between Edirne Kapi and Top Kapi provide shelter for various activities, including a stable

The image used as background for this page shows a detail of Tekfur Sarayi.

Move to:
Introduction to this section
From Top Kapi to Yedikule Kapi
From Yedikule Kapi to Mermer Kule
The Maritime Walls