- The Maritime Walls
(A section of the walls) 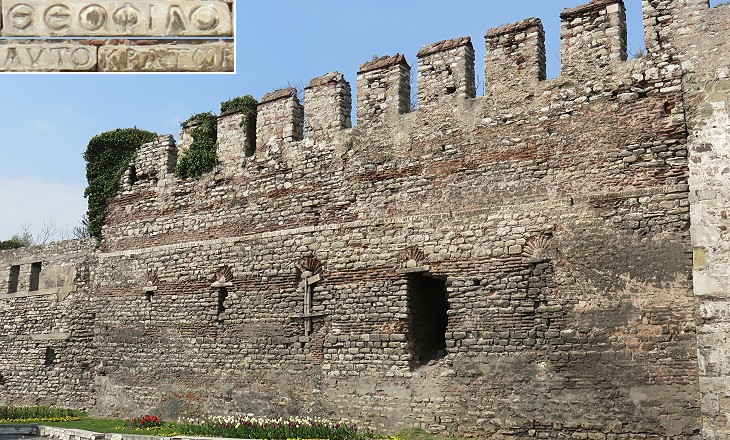 Section of the walls near Bucoleon Palace with a very long inscription celebrating Theophilos, Byzantine Emperor in 829-842; (inset) the name of the emperor and "autokrator" the Greek word for emperor

Historians do not agree on whether the maritime walls were built at the same time as the land ones. In general it is believed that some walls to protect the city from a naval threat were built after the Vandals conquered today's Tunisia in 439 and came into the possession of the large merchant fleet which supplied Rome. However it was not until the sieges of Constantinople by the Avars (626) and by the Arabs (674-678) that the Byzantine emperors realized the importance of walls on the Golden Horn and on the Sea of Marmara.
In particular Emperor Theophilos made extensive improvements to these walls after the Arab conquest of Crete had increased the chances of a naval attack.

Walls on the Golden Horn Archaeological Museum of Istanbul: one of the chains (below) which closed the Golden Horn and (above) a modern painting showing that in 1453 chains were placed between the maritime walls of Constantinople (left) and those of Galata (right)

The Golden Horn was the harbour of the city until the end of the XIXth century. It was first closed with chains by Emperor Leo III during the second Arab siege of Constantinople in 718. Byzantine emperors began to lose full control of the Golden Horn when they allowed Venetian and Genoese merchants to establish themselves on its shores. The self-government of a Genoese settlement at Galata on its northern shore was formally acknowledged in the XIIth century. In 1204, during the Fourth Crusade, a Venetian fleet managed to break the chain and enter the Golden Horn. The assault on the towers of the maritime walls was led by Enrico Dandolo, Doge of Venice, aged ninety and blind (see his grave in Hagia Sophia).

St. Mark yet sees his lion where he stood,
Stand, but in mockery of his witherd power (..)
Oh for one hour of blind old Dandolo!
Th'octoyenarian chief, Byzantium's conquering foe. Aya (left) and Cibali (right) Kapi, gates on the Golden Horn. The latter is associated with Cebe Ali Bey who entered the city through this gate, but it is best known for the "balik" (fish) restaurants in its proximity

In 1453 the Ottomans managed to transport some ships overland from the Bosporus to the Golden Horn forcing the defenders to spread themselves out on a longer line. After the conquest of Constantinople the Ottomans gradually wiped out the Genoese and Venetian bases in the Aegean and Black Seas. Eventually the protection of the city from naval attacks relied on a series of fortresses on the Bosporus and the Dardanelles. The walls on the Golden Horn fell into abandonment and the few sections still standing in the XIXth century were demolished to open a large road. The gates were generally small, but one of them near the Palace of Blachernae was decorated with reliefs, one of which can be seen at the Archaeological Museum of Istanbul.

Walls at the Seraglio Tip 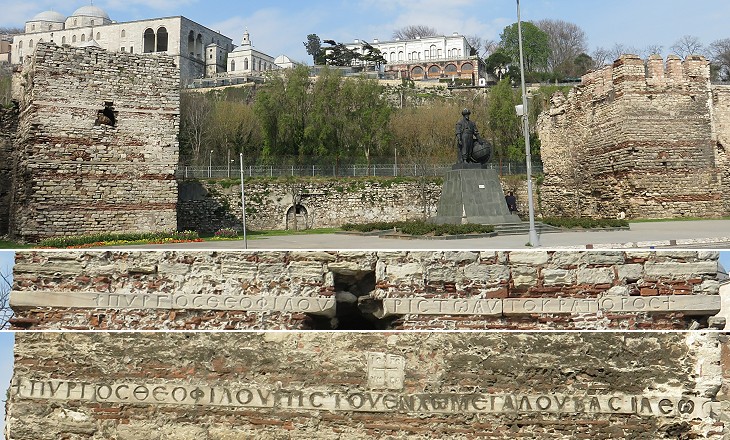 (above) Towers at the Seraglio Tip and between them a modern statue of Piri Reis, a XVIth century great Ottoman cartographer, with the Mecidiye Pavilion of Topkapi Sarayi in the background; (below) inscriptions on the towers celebrating Emperor Theophilos

The Sultans paid attention to the maintenance of the sea walls which surrounded their palace. It owes its name to a lost cannon (Turkish top) which was placed at the easternmost point of the sea walls, not far from the towers shown in the photo. The palace was known in Europe as Seraglio from Turkish Saray (Palace). 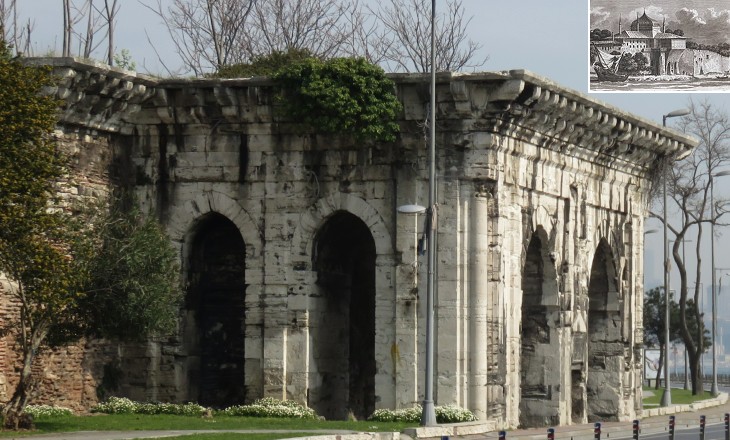 Topkapi Sarayi included some pavilions built right on the edge of the sea walls. In the XIXth century the Sultans moved their residence to Dolmabahce Sarayi on the Bosporus and the decision had an impact on the maintenance of their old palace. The Pearl Pavilion was so named after the inside decoration of its dome. It projected over the walls thanks to a series of arches which are the only remaining evidence of its location. It was designed in 1591 by Davut Aga and it was so praised by Sultan Murat III that he decided to spend his last days there. 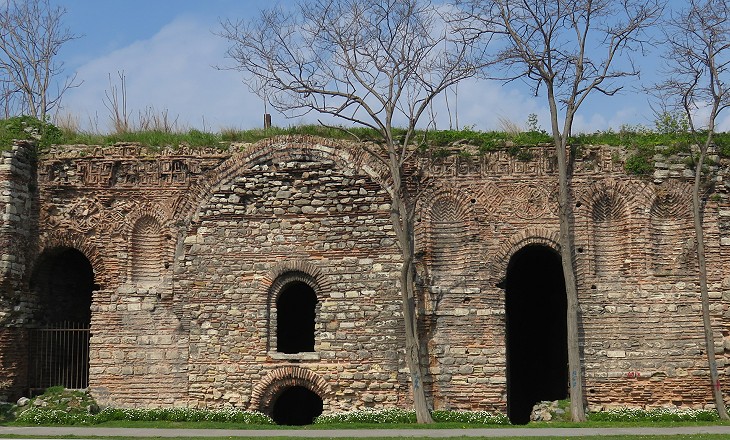 The sea walls were modified at the beginning of the XIIth century in order to support at their top the construction of a church with a large crypt, where perhaps emperors of the Komnenos dynasty (1081-1185) were buried. The church is lost, but we can still admire part of the elaborate brickwork which decorated the walls of the crypt. The image used as background for this page is based on a detail depicting a cross inside a circle. The kitchens of Topkapi Sarayi designed by Mimar Sinan, the leading Ottoman architect of his time, in 1574

Breaks in the walls offer views of parts of Topkapi Sarayi which cannot be fully appreciated by visiting the palace itself. If it were not for their high chimneys one would think Mimar Sinan had built cells for a medrese, similar to those he built at Suleymaniye. The land and sea walls surrounding Topkapi Sarayi coincide more or less with the limits of the Byzantine Mangana neighbourhood which included a small palace, monasteries and churches. 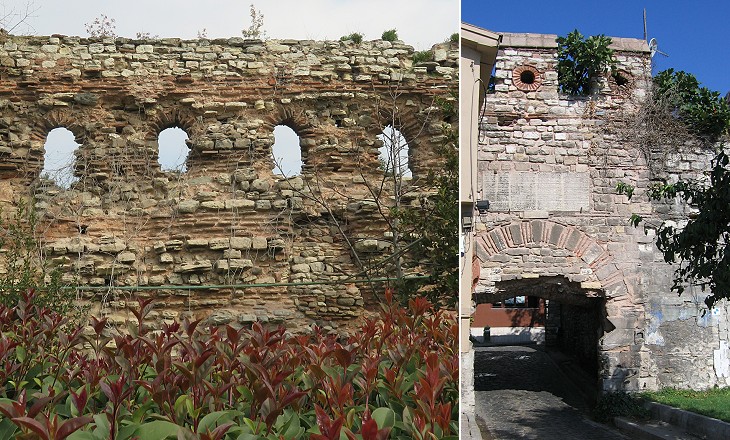 A ruined section of the walls with evidence of a Byzantine building; (right) Ahir Kapisi (Stable Gate) Emperor Justinian built a small imperial palace having direct access to a probably private harbour. The palace was decorated with statues of bulls and lions and it is named after them. It was used until 1204 when the Crusaders sacked it: At Bucoleon were found the larger number of the great ladies who had fled to the castle, for there were found the sister of the King of France, who had been empress, and the sister of the King of Hungary, who had also been empress, and other ladies very many. Of the treasure that was found in that palace I cannot well speak, for there was so much that it was beyond end or counting.
Geoffrey de Villehardouin - Memoirs of the Crusades - translation by Frank Marzials. 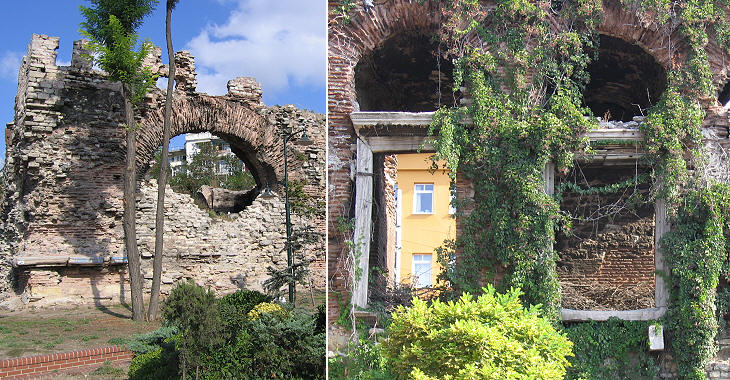 Details of the palace

When Constantinople returned into the hands of a Byzantine emperor in 1261 it bore little resemblance to the city of 1204. The Palaiologos dynasty (1261-1453) restored some churches and palaces and built or enlarged others (e.g. Tekfur Sarayi and St. Saviour in Chora), but Bucoleon Palace was left to rot.

Of the palaces of the Greek emperors those of the Boucoleon and Hebdomon (it was situated seven miles from the Milion along the Sea of Marmara outside the walls) were the principal. Theodosius the younger constructed the former with a splendour worthy of the master of the eastern world. Its site upon the city walls facing the sea of Marmora, and not far distant from the Atmeydan (Hippodrome), is still to be traced by detached members of architecture.
James Dallaway - Constantinople Ancient and Modern with Excursions to the Shores of the Islands of the Archipelago and to the Troas - 1797
Next to the palace the Lions' Gate (thus named after two marble lions which decorated it) was the direct entrance to the city from the harbour. 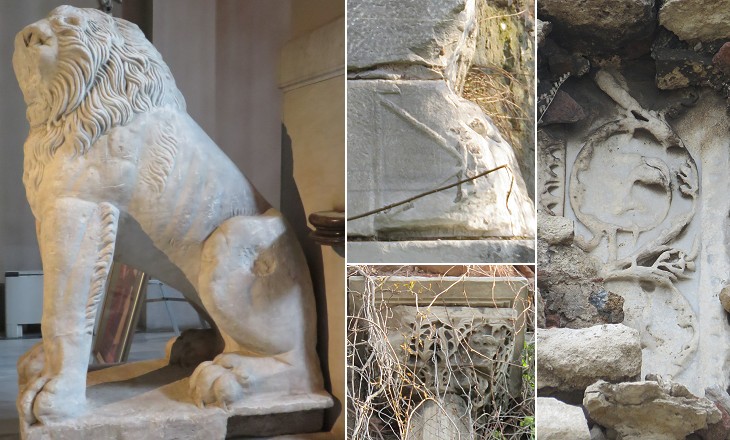 (left) Archaeological Museum of Istanbul: one of the two lions guarding the gate (see that which the Venetians found at the Piraeus); (right) details of the decoration of the gate and of the palace

Walls on the Sea of Marmara 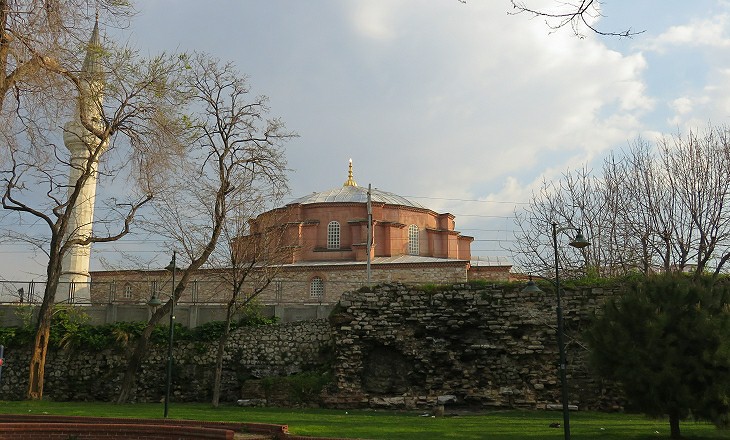 Walls near Sts. Sergius and Bacchus

A detailed map of the Austro-Hungarian Military Geographic Institute of 1870 shows almost no evidence of the maritime walls along the Sea of Marmara, apart from the Psamathia Gate and its surroundings.
Parts of the maritime walls were uncovered in 1872 when many houses were pulled down to allow construction of the "Orient Express" railroad.

A restored section of the walls with Samatya Gate

Psamathia or Samatya was the Armenian quarter of Constantinople from 1461. Perhaps the walls were maintained to protect its inhabitants during riots. It is situated on the Seventh Hill where many Armenian churches still exist.