from Top Kapi to Yedikule Kapi
(A section of the walls)

A View from Top Kapi 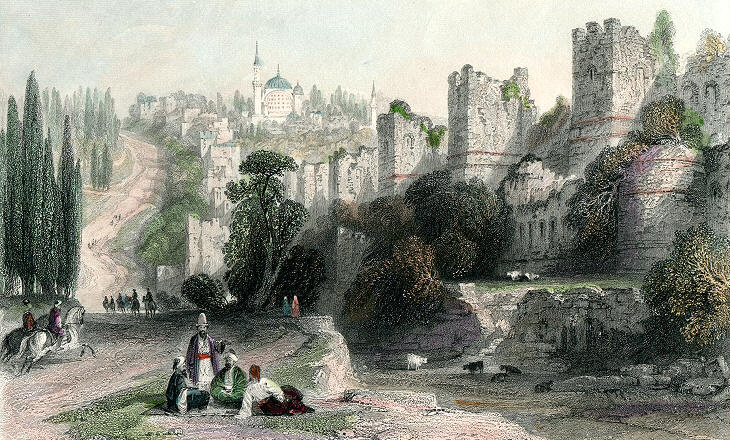 1838 coloured engraving (T. Allom - J.C. Bentley) showing the walls near Top Kapi. The mosque in the background is Mihrimah Camii

August 1794. The walls are beautiful; they are triple, extremely ruined, and covered with vines, figs, ivy, and a profusion of greens and cypress groves: along them is a long line of towers equally broken, and covered with green, presenting each a perfect ruin for a picture, and still more set off by the many beautiful foregrounds provided by the orchards and burying-groves of some neighbouring villages.
The letters of John B.S. Morritt of Rokeby descriptive of journeys in Europe and Asia Minor in the years 1794-1796.

Top Kapi (Gate of St. Romanus) and details of its Byzantine decoration

Top Kapi (Cannon Gate) was rebuilt after the 1453 Ottoman conquest of Constantinople and became the main overland entrance to Istanbul. Today the traffic goes through openings in the walls and the gate sees only a flow of pedestrians from the nearby dolmus (local small buses) station. It has such a quiet aspect that it is hard to believe it watched such crucial events. A few traces of the old decoration are still visible. 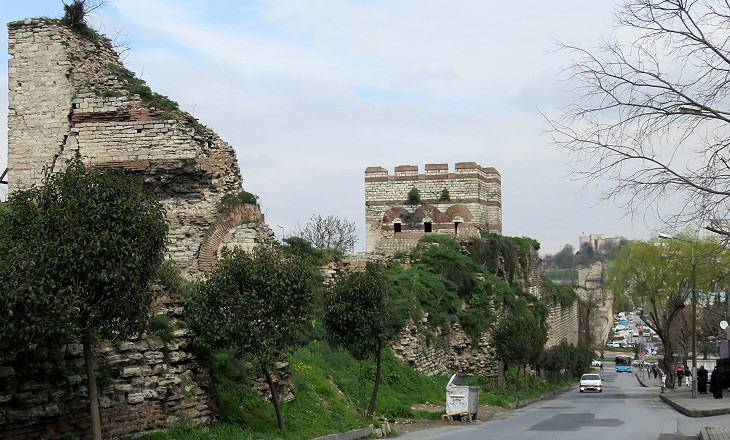 Walls going down from Top Kapi to Edirne Kapi

The cannon to which the gate owes its name was built by Orban, an iron founder from Brasov in today's Romania. According to tradition he first offered his services to Emperor Constantine XI and then to Sultan Mehmet II. His largest cannon was called basilica (very large church) by the Greek defenders of Constantinople because of its size. It was a bombard, a large calibre artillery piece which threw stone balls. 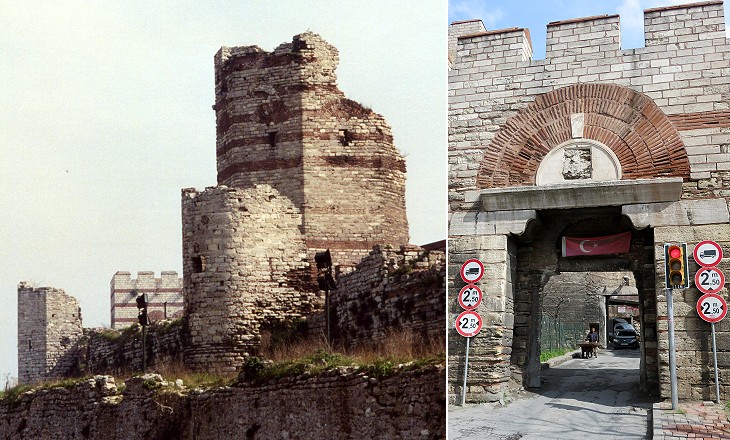 The walls between Top Kapi and Mevlevihane Kapi have some very evocative sights, not altered by improper restoration. Mevlevihane Kapi owes its name to a tekke, a Dervish monastery which stood in its proximity. The Dervishes are followers of the teachings of Mevlana Jalal-ad-Din. 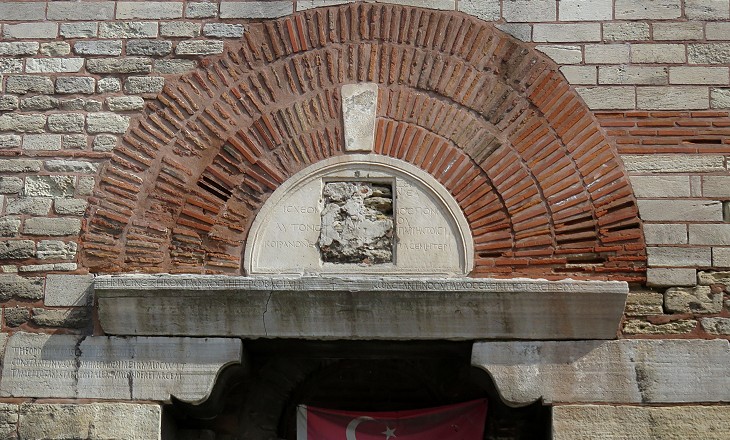 Detail of Mevlevihane Kapi showing a series of inscriptions

The gate is flanked by two large towers, one of which is called "Tower of Constantine" because of two inscriptions celebrating the prefect Constantine who built it in 447. One of them is written in Latin and says: By the command of Theodosius (II), Constantine erected these strong walls in less than two months. Scarcely could Pallas (Athena) herself have built so strong a citadel in such a short time.
Another small inscription on the lintel celebrates repairs made in 565.

Kitchen gardens outside the walls...

The beautiful towers in this part of the walls show their inner structure. The walls were made by alternate layers of stones and bricks. This was not for decoration, but to strengthen their resistance. 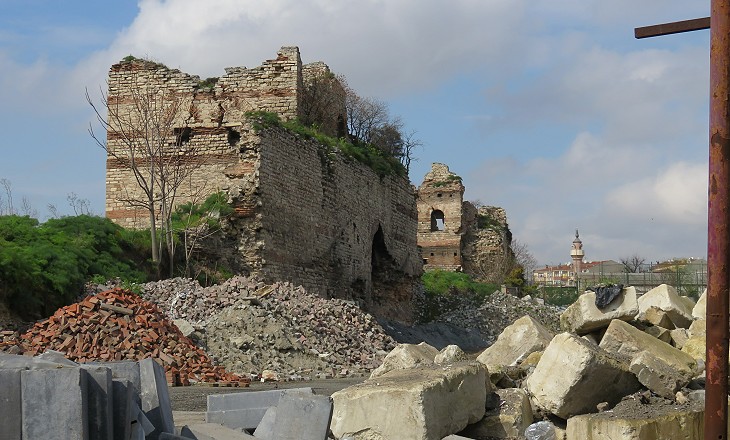 ... and construction material depots inside them 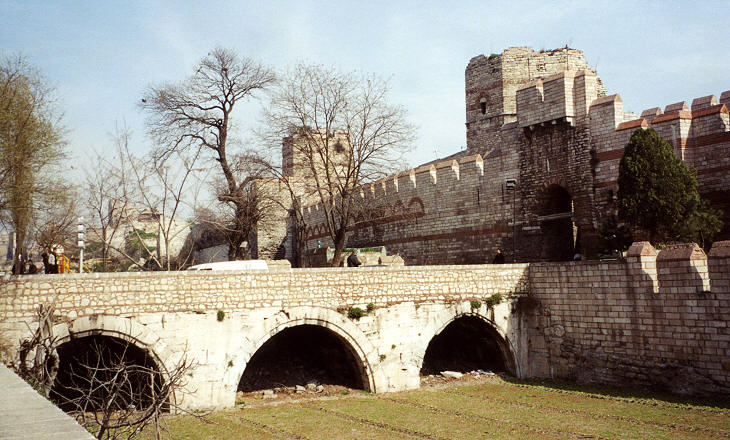 Silivri Kapi shows the complete set up of the walls: moat, outer wall, inner wall. It is associated with a key event in the history of Constantinople. In 1261 a small body of Michael VIII Palaiologos Byzantine troops managed to enter the city through a secret passage in this gate which had been left unguarded. Latin Emperor Baldwin II was caught by terror and he fled the city in disguise in a Venetian galley. 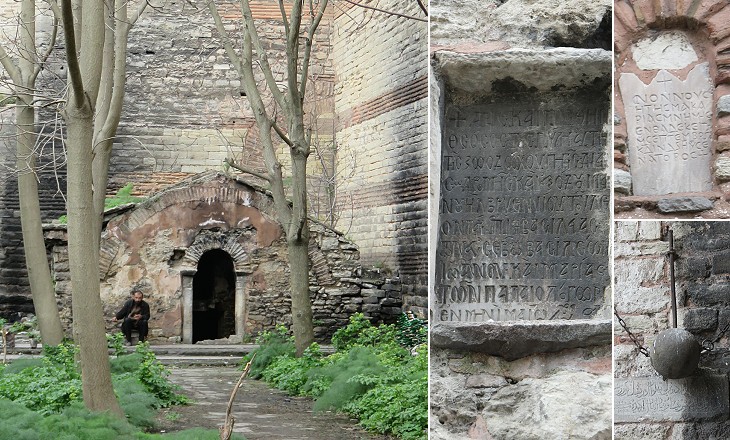 (left) A IVth century AD tomb between the inner and the outer walls at Silivri Kapi; (right) Greek inscriptions celebrating repairs made in the XIth and XVth centuries and an Ottoman iron ball next to the gate

The gate is named after the small port of Silivri (ancient Selymbria) on the Sea of Marmara, 40 miles west of Istanbul. Its Greek name was Pege (Holy Spring), after a monastery by the same name outside the walls.

Belgrat Kapi was named after Serbian artisans who were relocated to this part of Constantinople by Sultan Suleyman the Magnificent after he conquered Belgrade in 1521; the name applies also to a wood outside the walls. It has been totally rebuilt (you can see it also in the background of this page). It was closed from 1453 to 1886 and the current gate is not the historic one. 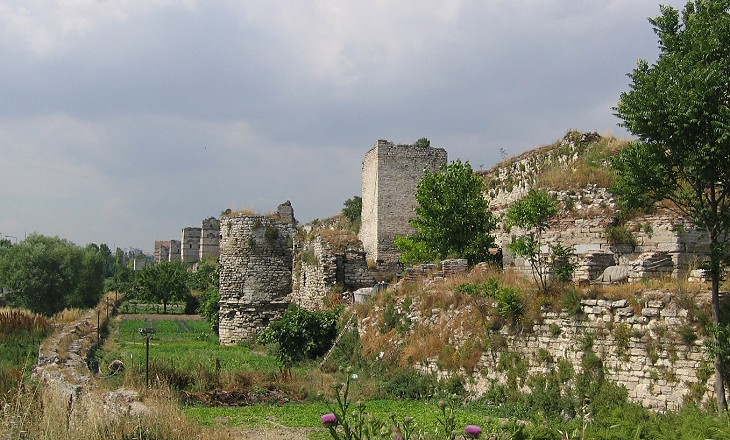 Walls between Belgrat and Yedikule Kapi

Eleven towers still in good condition and continuously connected by the walls offer this breathtaking view.

Move to:
Introduction to this section
From the Golden Horn to Top Kapi
From Yedikule Kapi to Mermer Kule
The Maritime Walls