or Constantinople - Introduction
(A section of the walls)

Byzantium, Constantinople, Istanbul are the names of this magnificent city, which was called also Nova Roma, New Rome or Second Rome.
The great wall from the seven towers to the harbour (Golden Horn) is four miles long, with a triple fortification eighteen feet distant from each other, studded with lofty towers of every shape, embattled upon deep brackets, many of which have inscriptions of marble or iron particularising the builder or date.
James Dallaway - Constantinople Ancient and Modern with Excursions to the Shores of the Islands of the Archipelago and to the Troas - 1797 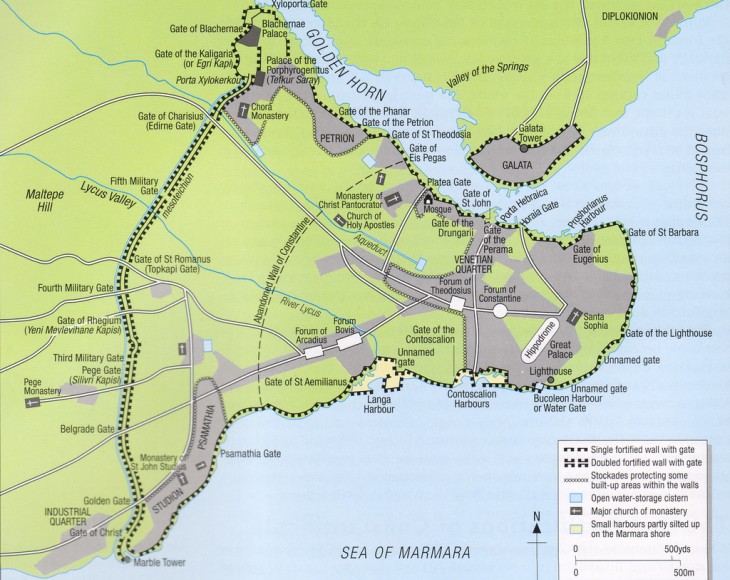 Emperor Constantine built walls to protect the city, but new housing developments outside them and the growing threat of the Goths and the Huns made them obsolete. In 413 Eastern Roman Emperor Theodosius II decided to build new walls, not only on land, but also on the seafront. This section deals with these imposing fortifications. Another section deals with the main monuments of the city and a third one with medieval Galata, the Genoese settlement on the Golden Horn opposite Constantinople.
Initially the walls were made up of one line, but soon Theodosius strengthened the land walls by adding a second line and a moat. Both the inner and the outer wall were protected by towers placed at a distance of 170 feet from each other. 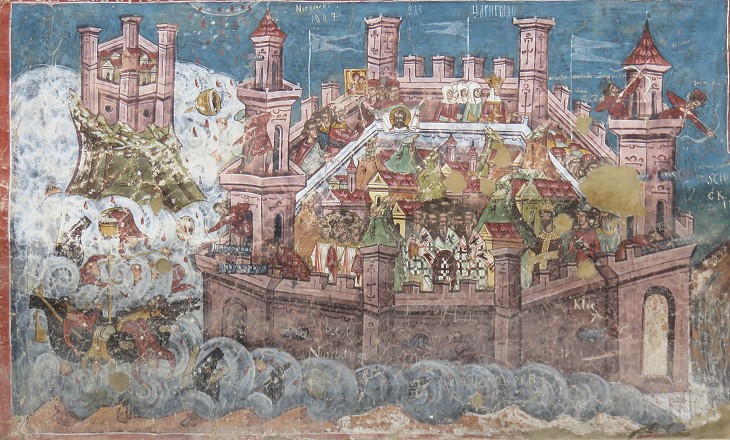 Siege of Constantinople by the Avars in 626. This XVIth century fresco at the church of the Monastery of Moldovita in Romania actually depicts the siege of 1453 which ended with the fall of the city

The walls of Constantinople, erected by the emperors, consist of alternate courses of the large flat brick and stone, of twice their depth, and the internal arcades and rooms in the towers, are all of the former material, and most curious construction. Beside the natural consequences of time, and the force of earthquakes, these works have sustained no less than seven memorable sieges since their present form; and it is surpring that they now appear so perfect. (..) There are five gates, with stone bridges over the foss, which is twenty-five feet wide, of which, Topkapessi, the Porta Sancti Romani, though the most ruinous, is the most remarkable, as that where the Turks effected their entrance, and the emperor Constantine Paleologus was slain. Dallaway
In 1204 the Crusaders managed to conquer some towers of the maritime walls on the Golden Horn and eventually to open three gates to let their comrades into the city (you may wish to see some mosaics at Ravenna which celebrated the event). The land walls were eventually breached by a large Ottoman cannon in 1453.