You may wish to read an introduction to this section first. Other pages on Isfahan: Seljuk Isfahan, Naqsh-e Jahan, Other Mosques, Southern Quarters and Royal Palaces. 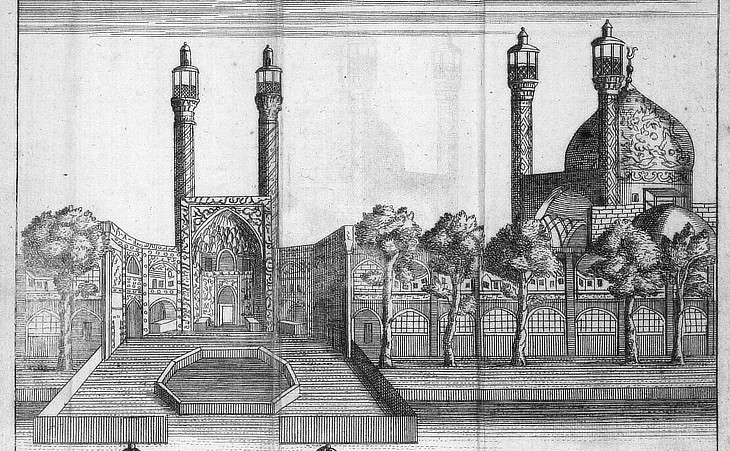 In the middle of the Southern Front stands a Portal, with a Tower upon each side, which leads to a Mosquee, the Gate whereof is cover'd all over with Plates of Silver, and is certainly the neatest Portal and fairest Entrance into any Mosquee of Persia.
Jean-Baptiste Tavernier - Travels through Turkey and Persia (1630s-1660s) 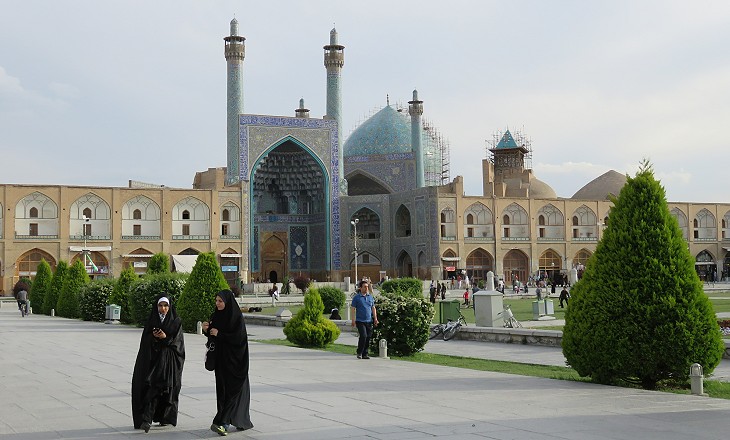 Shah Abbas Mosque at the southern end of Naqsh-e Jahan

In the centre of the southern or narrow end of the Meidan stands the Musjid-i-Shah or Royal Mosque of Isfahan. It was originally intended as the Musjid-i-Jami or Friday Mosque and was from the beginning one of the noblest fabrics in the city. It has been many times restored. (..) Inside were preserved the blood-stained shirt of the martyred Husein and a Koran written by the Imam Reza.
George N. Curzon (Lord Curzon) - Persia and the Persian Question - 1892
Shah Ismail who founded the Safavid dynasty in 1501 promoted the forced conversion of his Sunni subjects to Shi'a Islam and he claimed to descend from Ali, whom the Shi'a regarded as the rightful successor to the Prophet. Husayn ibn Ali (son of Ali) was killed at the battle of Kerbala in 680 and is regarded as a martyr. The policy of forced conversion was enforced by the Safavid rulers throughout the whole XVIth century and in particular during the reign of Shah Abbas (1588-1629). 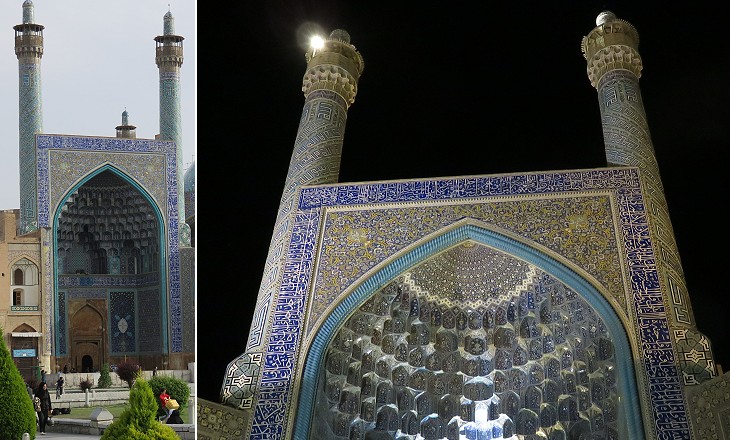 A lofty archway framed in a recess, embellished with interior honey-comb groining in enamelled faience, surrounded by tile inscriptions from the Kuran, and flanked by two minarets with spiral bands of similar ornamentation, leads from the Meidan through a porch into the inner court. Lord Curzon
Isfahan, the city at the centre of the Persian tableland where Shah Abbas relocated his capital had already a Jame (large/Friday) Mosque. Differences between Sunni and Shi'a do not affect the overall design of their mosques, so the old Jame Mosque which had been built by the Seljuks who were Sunni, did not need to be replaced. Shah Abbas however wanted his capital to have a Jame Mosque associated with his name. The gigantic portal was completed in 1616 whereas the mosque not until after his death. 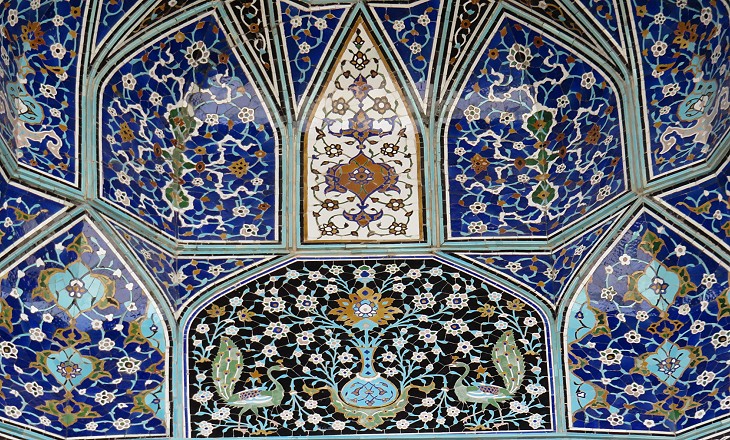 The tile decoration of the portal was based on the same mosaic technique used at Yazd and Soltaniyeh in the XIVth century. It combined tile pieces of different colours to form a decorative carpet-like pattern. At Soltaniyeh only three colours (white, lapis lazuli, turquoise) were used, at Yazd also ochre, whereas at Isfahan the mosaics are made up of six colours with the addition of green and black. 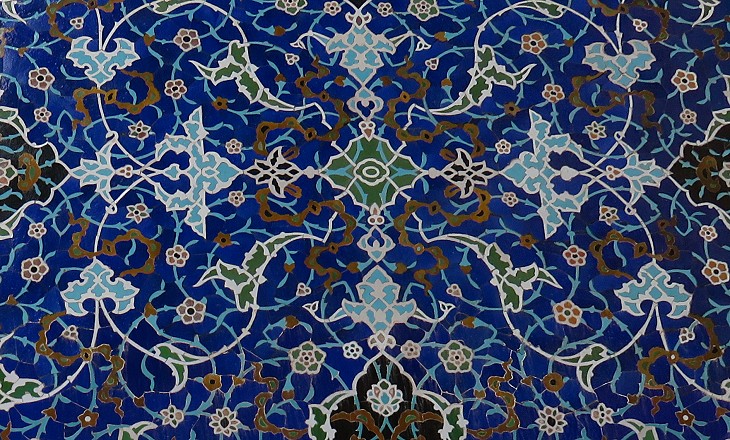 The decorative treatment of this beautiful building, though falling, like all other works of art in Persia, into decay, yet remains a superb sample of the style of the Safavi kings. Lord Curzon
Lapis lazuli was used as the background colour, so that the overall tone of the portal is dark blue. 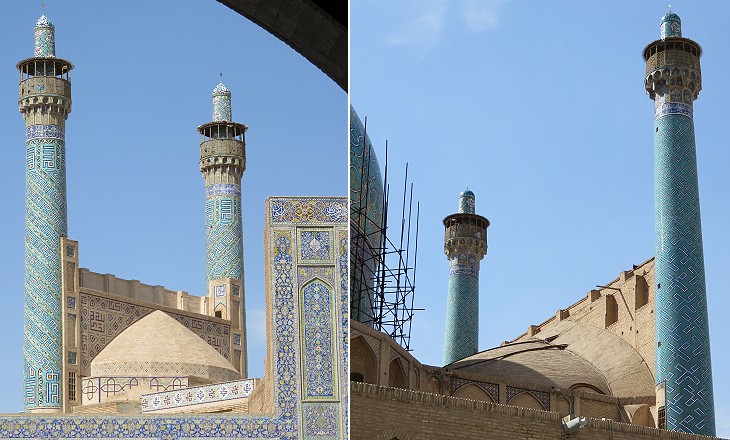 What ever way you come to it you may discover first the Towers of the Mosques, and then the Trees that environ the Houses, so that Ispahan seems rather a Forrest than a City. Tavernier
The four minarets have never been used by the muezzin, the king being afraid that from their summits too much might be seen of the secrets of the royal seraglio adjoining. Their place for the call to prayer is taken by an ugly and stunted cage on the summit of one of the iwans. Lord Curzon
The confrontation between Ottoman (Sunni) Sultans and Safavid (Shi'a) Shas was not limited to the battlefields, where the two Empires fought a long war (1603-1618). In 1609 Sultan Ahmet I laid the first stone of a new grand mosque in Constantinople; the construction of Shah Abbas Mosque started in 1611.
In this sort of competition, Ahmet played foul. His mosque has six minarets, something which was regarded as a sacrilege because only the Great Mosque of Mecca could have as many as six minarets.
Abbas did not dare to build so many. The four minarets of his mosque are decorated with tile mosaics forming the words "no God but God". The two minarets of the portal have another tile inscription beneath the balcony, which is missing in the two prayer hall minarets. 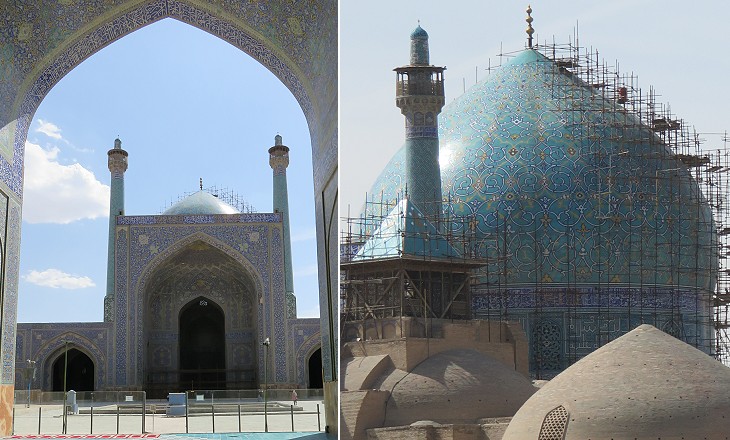 Opposite the entrance a third iwan, flanked by minarets, conducts into the mosque proper, which is surmounted by the principal cupola, whose exterior, covered with exquisite tiles containing patterns in dark blue and green arabesque on an azure ground, is one of the principal landmarks in the city. Lord Curzon
The dome of the main prayer hall was designed following a pattern (i.e. the dome of the Mausoleum of Oljeitu at Soltaniyeh) which is very different from the Ottoman shallow domes. It is made up of two shells, the external one being 14m/50ft higher than the internal one. This became a model for subsequent domes built at Isfahan (Imamzadeh Ismail Complex, Madar Shah Medrese and others) and eventually this type of dome spread throughout the country and it has become the iconic dome of modern Iran. On the exterior, the bulbous dome is covered with an arabesque on a light blue background, whereas its interior is decorated with a sunburst at the apex from which tiers of arabesque descend (it is shown in the introductory page). 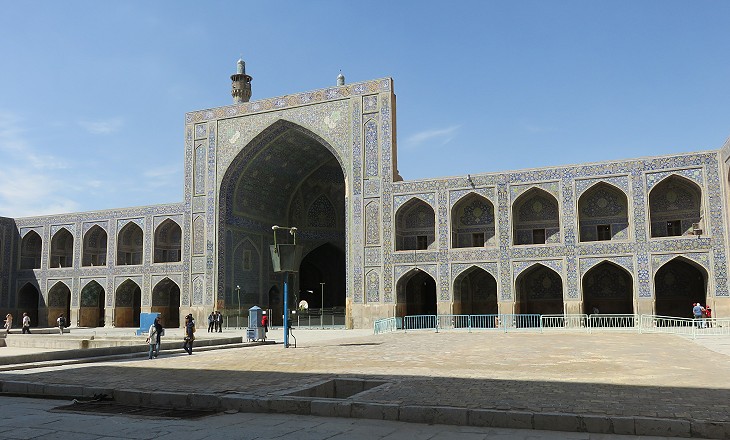 Here the peculiar construction of the mosque, already visible from the exterior, is fully apparent. The axis of the Meidan being almost due north and south, the architect required to incline the axis of the mosque considerably to the south-west, in order that the mihrab or prayer-niche might be turned in the direction of Mecca. This purpose was effected by architectural means that are at once grandiose and simple. The inner court, marble-paved and containing a great tank fur ablutions in the centre, is surrounded by a two-storeyed arcade. The arches are kept for the accommodation of priests and attendants. On either side rises a lofty tile-faced iwan, a mighty arch in which opens access to a space covered by a low dome. Lord Curzon
The complex is structured around a large rectangular courtyard surrounded by a two-story arcade with an iwan at the centre of each side. That preceding the main prayer hall is larger than the others. The overall arrangement of the courtyard is similar to that at the Friday Mosque. 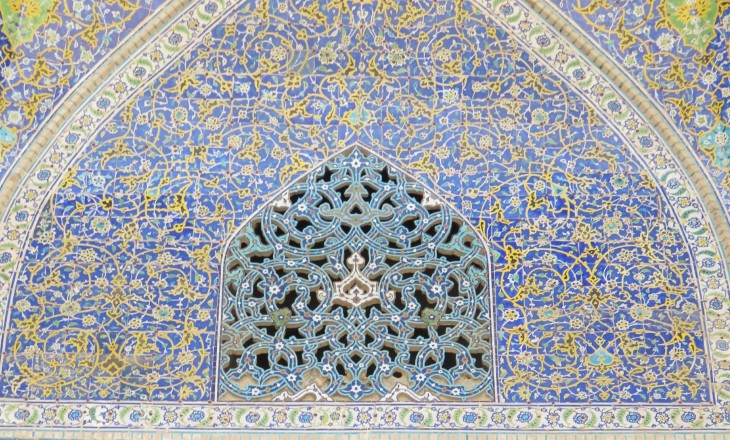 The completion of the complex lagged behind the expectations of Shah Abbas. This was mainly due to the complex mosaic decoration process and at one point Shah Abbas agreed to move to a different technique based on square tiles incorporating various colours. It was simpler, cheaper and faster and it glittered in the sun. It might have cost the pride of Shah Abbas a good deal to use this new process, because the Ottomans had used tiles since the early XVIth century. The colours of the Ottoman tiles included red which is missing in those at Isfahan (you may wish to see the decoration of Rustem Pacha Mosque built in 1561-1563 at Constantinople). 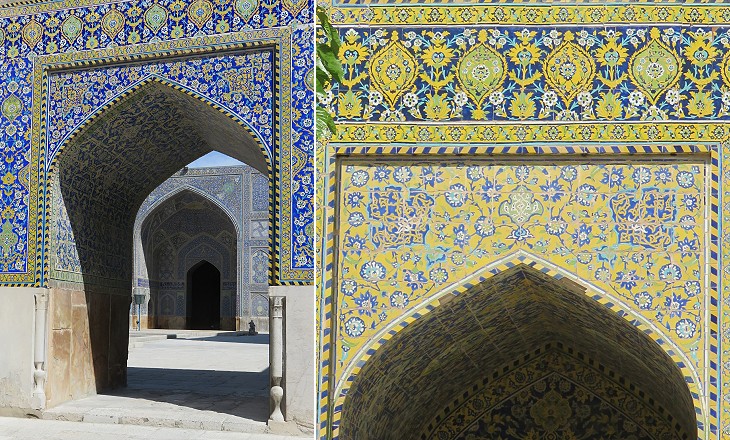 On either side of the shrine are further courts, with basins and porticoes, to which the public are admitted on Fridays. Lord Curzon
The complex includes two smaller courtyards housing two medreses at the sides of the main prayer hall. The completion of the decoration required a long time and perhaps it lasted until the end of the Qajar period (XIXth century), when the palette of colours extended to include bright yellow. Most of the tiles were replaced in the 1930s. 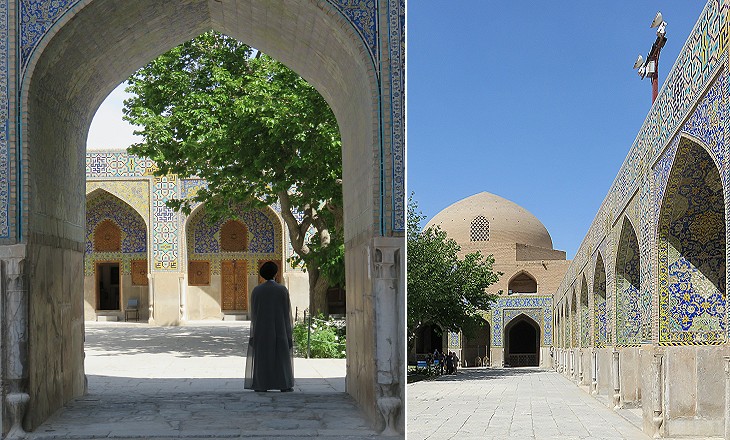 Robert Byron was not impressed by the mosque: Shah Abbas was occupied with the Royal Mosque at the south-west end of the Maidan, whose huge blue bulk and huge acreage of coarse floral tilework form just that kind of "oriental" scenery so dear to the Omar Khayam fiends* - pretty, if you like, even magnificent, but not important in the general scale of things.
Robert Byron - The Road to Oxiana - Macmillan 1937 (piece written in March 1934).
*A reference to a widespread and undiscriminating interest in Islamic art which developed in the 1930s as a result of many mosques in Persia and elsewhere being photographed for the first time and made known to the western public.
The image used as background for this page shows a detail of the portal door.