in Central Asia - Bukhara - p. 2
(detail of a decoration at Abdoul Aziz Khan Medrese in Bukhara)

It is impossible for me to forget Bokhara, were it only on account of the efforts with respect to religion which I have noticed there both on the part of government and people. I often heard it affirmed that "Bokhara is the true support of Islam." The title is too weak; it should be rather termed the "Rome of Islam" since Mecca and Medina are its Jerusalem. Bokhara is aware of her superiority, and plumes herself upon it in the face of all the other nations of Islam.
Arminius Vambery - Travels in Central Asia in 1863

Bukhara was long an important economic and cultural center in Central Asia. The ancient Persian city served as a major center of Islamic culture for many centuries and became a major cultural center of the Caliphate in the 8th century. The Ulugbek medresseh is a surviving contribution from Temurid period. With the advent of the Sheibanids came some of the most celebrated buildings of Bukhara.
From the UNESCO synthesis of the universal value of Bukhara which in 2003 was added to the World Heritage List.
Similar to Samarkand, the most imposing buildings of Bukhara are medreses, educational institutions which were not limited to theological schools. Ouloug Beg, grandson of Timur, built in 1417-1421 the first large medrese of Bukhara. Its design is similar to that which he built in the Registan of Samarkand, although the size of its portal is smaller.

At the time he built the medrese Ouloug Beg was not the ruler of the country, but the governor of the region as his father Shah Roukh preferred to live in Herat (in today's Afghanistan). He was fond of astronomy and also in this medrese he wanted stars to be part of the decoration. Sometimes by looking too far in the distance the observer does not notice what is right under his nose; this happened to Ouloug Beg who was assassinated by his own son Abd-ul Latif in 1449.

Similar to that in Samarkand, also the Ouloug Beg Medrese in Bukhara had the destiny of being faced by another medrese. This was built in 1652 by Abdoul Aziz Khan. Some mosaics show a Chinese influence: the icon at the top of the page shows a detail of a mosaic and the image used as background for this page does the same. The decoration of the medrese was left unfinished because Abdoul Aziz Khan lost the throne that same year.

The Bokhariot pretends that his native city possesses 365 mosques, counting the small as well as the large ones, so that the pious Mussulman may find a different one to attend each day in the year. I have not been able to discover more than the half of that number. The following are the only ones that deserve mention: 1. Mesdjidi Kelan, built by Timour, but restored by Abdullah Khan, which is thronged on Fridays, as the emir then says his prayers there. Vambery
Between the 9th and 16th centuries, Bukhara was the largest centre for Muslim theology, particularly on Sufism, in the Near East, with over two hundred mosques and more than a hundred madrasahs. UNESCO
Kalon means great and this mosque was known also as Jamia (Friday) because all male inhabitants of the city were expected to attend the Friday prayer in this mosque. When Genghis Khan conquered Bukhara and went inside the mosque he thought he was entering the (local) royal palace. When he learnt it was a religious building, he first turned it into a stable and then set fire to it. The current mosque was built in 1514: the portal leading to its courtyard had the objective of showing the wealth and power of the Shaybanid dynasty.

In order to allow all the male adults to attend the Friday prayer the courtyard was very large.
Genghis Khan was impressed by the tall tapering minaret which flanked the mosque and spared it. It was built in 1127 and it served also as a watchtower. It has features which call to mind a tapering Seljuk minaret at Isfahan which was built at approximately the same time. During the Manghit dynasty (1785-1920) it was used as a mean for executing some types of criminals. They had no chance to survive from such a fall.

Mohammed Alim Khan, the last emir of Bukhara, built a small medrese next to the minaret; luckily the modern building was in line with traditional architecture. Notwithstanding being under a Russian protectorate, the Emirs of Bukhara had ample latitude in running the internal affairs of their country. Mohammed Alim Khan received part of his education in St. Petersburg, but once back in Bukhara he favoured traditionalism and fostered anti-Russian feelings. During the war with the Soviets he murdered hundreds of Russian civilians who lived at Bukhara.

Kalon Mosque and details of its decoration

We lodged at a hospice in a suburb of Bukhara called Fath Abad. (..) We spent a most delightful night there; the Koran-readers recited in pleasing voices, and the preacher delivered an address, and then they sang melodiously in Turkish and Persian.
H. A. R. Gibb - Selection from the Travels of Ibn Battuta in 1325-1354
In the small octagonal building in front of the mosque a second imam repeated to the crowd in the courtyard the prayers and sermons which were said by the principal imam inside the mosque.

The Bokhariot prides himself upon the number of these colleges, and fixes them at his favorite figure, 365. There are, however, not more than 80. The most celebrated are the following: 1. The Medresse Kokeltash: it has 160 cells. Vambery
The last great monumental complex of Bukhara lies around the main pool of the old town. Its oldest building is a 1568 medrese named after Koulbaba Koukeldach, a military commander at the time of Abdullah Khan II. It is located to the west of the pool (which at that time did not exist).

2. M. Mirarab was erected in 1529, and has 100 cells. Vambery
Mir-i-Arab means Prince of the Arabs because the medrese was dedicated to Sheikh Abdullah of Yemen by his friend Ubaidullah Khan. It is said that in order to finance the construction of the building Ubaidullah Khan sold 3,000 slaves. The medrese was built in 1535 opposite Kalon Mosque. The complex consisting of this medrese and of the Kalon mosque and minaret is called Po-i-Kalon, Pedestal of the Almighty.

We may remark, generally, that the colleges of Bokhara and Samarcand are the cause why so high an idea not only prevailed throughout Islam, but existed for a long time even among Europeans, as to the learning of the superior schools in Central Asia. The readiness to make the sacrifice which the foundation of such establishments supposes may by a superficial observer be easily mistaken, and ascribed to a higher motive. Unhappily, merely blind fanaticism lies at the root; and the same thing occurs here as took place during the Middle Ages. Vambery
Medreses were an important cultural centre, but with Bukhara turning towards isolation and obscurantism, only theological matters were taught to the students.

The medrese was closed by the Communist regime in 1925, but in 1946 Stalin reopened it as part of a series of concessions to the local traditional beliefs and because the repression of religious feelings damaged the image of the USSR in the Muslim world.

3. Koshmedresse (pair of colleges) of Abdullah Khan.- It has about 100 cells, but not so valuable as the preceding ones. Vambery
In the second half of the XVIth century Abdullah Khan II built two medrese facing each other. The exterior of both medrese was extensively restored in the 1950's and again more recently so they look "too new".

Nadir Divanbegi Khanagha and detail of the decoration (XVIIth century)

He conducted me to the renowned place lebi hauz Divanbeghi (bank of the reservoir of the Divanbeghi). For Bokhara, I found this a most attractive spot. It is almost a perfect square, having in the centre a deep reservoir 100 feet long and 80 broad; the sides are of square stones, with eight steps leading down to the surface of the water. (..) On the fourth side, that to the west, which is in the form of a terrace, we find the mosque Mesdjidi Divanbeghi. At its front there are also a few trees, where dervishes and meddah (public reciters) recount in verse and prose, and actors represent simultaneously, the heroic actions of famous warriors and prophets, to which performances there are never wanting crowds of curious listeners and spectators. Vambery
In 1619 Nadir Divanbegi, a sort of Treasurer of the Khan, built a large pool (Liab-i-Haouz) which was meant to serve as reservoir. At the same time he erected a khanagha, a monastery for the dervishes, on the northern side of the pool.

Mesdjidi Divanbeghi, built, with the reservoir and medresse bearing the same name, by a certain Nezr, 1029 (1629), who was divanbeghi (state secretary) of the Emir Imankuli Khan. Vambery
Three years later Nadir Divanbegi started the construction of another building to the east of the pool; this was meant to be a private caravanserai, but the Khan complimented him for having started the construction of a medrese and Nadir Divanbegi had no other options than to modify his original plan.

The decoration of the portal is characterized by two simourghs (phoenix birds) holding a white deer. This violation of the Muslim iconographic rules preceded that which a few years later appeared on the portal of Chin Dor Medrese in Samarkand's Registan. 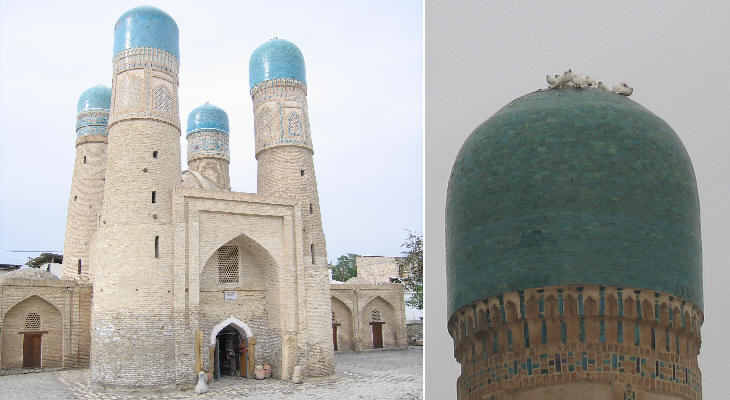 From a distance Tchor Minor (Four Minarets) has the appearance of an upside down stool; it was part of a lost 1589 medrese. The towers were never minarets and they had a merely decorative objective.

Victoria and Albert Museum in London: tile decoration from the Mausoleum of Buyanquli Khan, a Mongol ruler of the XIVth century in the outskirts of Bukhara

Return to Bukhara - page one or move to:
Introductory page
Chakhrisabz
Khiva
Samarkand