You may wish to see a page on the ancient town first.
In 634-636 the Arabs, whom Prophet Muhammad had just united into the Muslim faith, conquered southern Syria; the inhabitants of Damascus welcomed them because they felt oppressed by Emperor Heraclius on two grounds; heavy taxation and religious persecution as the Christians of Syria were mainly followers of Monophysitism, a belief which the emperors of Constantinople, as leaders of the Church, regarded as heretical and wanted to eradicate.
The new rulers of Damascus let the Christians continue to pray in the Cathedral of St. John (a former gigantic Temple to Jupiter). 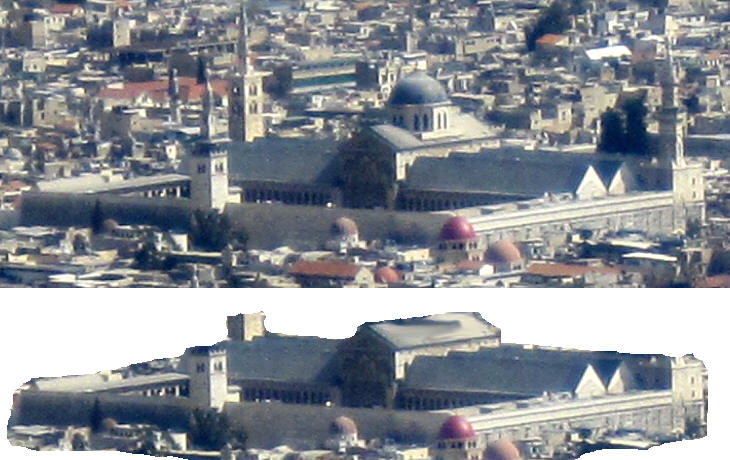 (above) Umayyad Mosque seen from Mt. Qassyoun; (below) without some of its major additions by the Ayyubids, Mamelukes and Ottomans

The site of the mosque was a church, and when the Muslims captured Damascus, one of their commanders entered from one side by the sword and reached as far as the middle of the church, while the other entered peaceably from the eastern side and reached the middle also. So the Muslims made the half of the church which they had entered by force into a mosque and the half which they had entered by peaceful agreement remained as a church.
H. A. R. Gibb - Selection from the Travels of Ibn Battuta in 1325-1354
It is said, this church was, by agreement, continued in the hands of the Christians; but that, at length, the Mahometans took it from them. (..) The Arab historians observe, that this mosque was much improved by the Kalif Valid about the eighty sixth year of the Hegira, which has made some of them affirm, that he built it.
Richard Pococke - A Description of the East and Some Other Countries - 1745
Caliph Al-Walid I of the Umayyad dynasty (705-715) during whose reign the Arabs invaded Spain and reached the Indus River, set his residence in Damascus and decided it needed a mosque which would show the importance acquired by the new religion and by the Caliphs, Muhammad's successors.
The Great Mosque of Damascus is a cornerstone of Islamic architecture and at the same time it is a development of Classic and Byzantine patterns; today it has an Islamic appearance, but the original building would hardly look like a mosque, without additions which were made many centuries later; the current dome was built after a fire destroyed the roof of the prayer hall in 1893; the upper sections of the three minarets were added by the Ayyubids, Mamelukes and Ottomans; in origin the minarets were just square towers, two of which rested upon existing towers of the wall which surrounded the ancient temple. 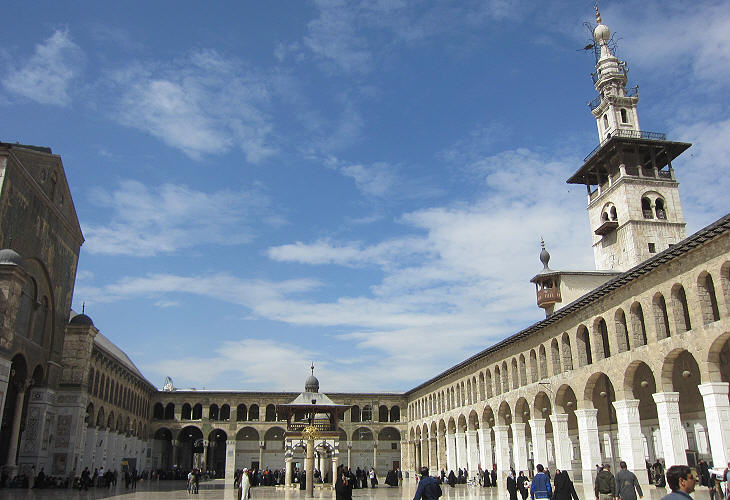 To the west of of the church is a large court with a portico of granite pillars on three sides; the front of the church next to the court consisted of arches supported by pillars. Pococke
The sahn (courtyard) is a key feature of a mosque, but it was also present in the design of a temenos, the sacred space around a sanctuary; in the case of the Umayyad Mosque the length of the sahn is that of the ancient wall which surrounded the temenos, while its width is smaller; in origin also the northern portico (that with the minaret) was supported by columns, but it was greatly damaged in 1400 when Timur conquered Damascus and almost destroyed it after having massacred its inhabitants. 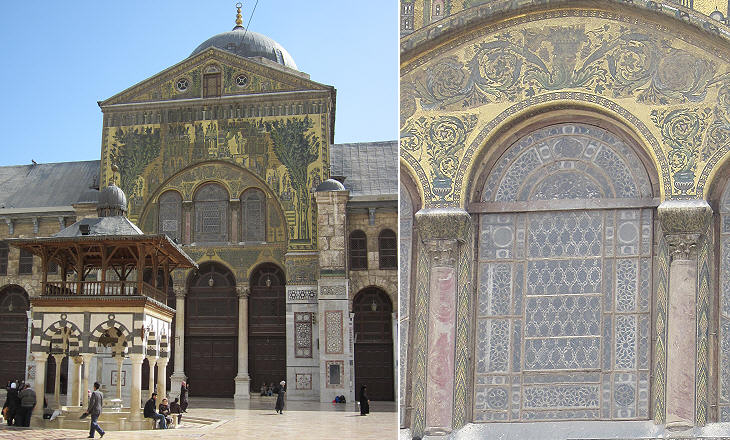 All the walls of the church, and of the porticos within the court, were adorned on the outside, over the arches, with Mosaic work, of which there are great remains. Pococke
The central higher section of the façade recalls a church, rather than a mosque, owing to its mosaics and its overall design; the mosaics are mainly modern, because the photographs taken by Professor K. A. C. Creswell in the early XXth century show little sign of them (it opens in another window). 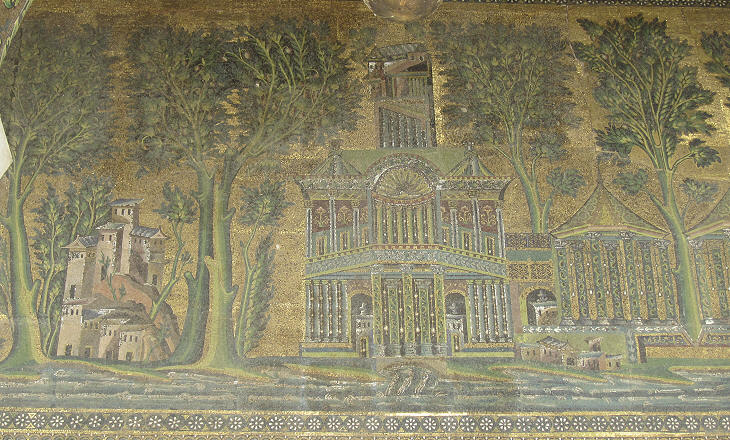 The art of mosaic saw a great development during the Late Roman Empire; the villas near Antioch were decorated with large and elaborate mosaics depicting mythological events; fine mosaics have been found also in the region of Apamea which is close to Damascus; the use of mosaics continued during the Byzantine rule of Syria and the Arabs were impressed by the mosaics they saw in the ancient buildings. Caliph al-Walid decided to decorate the four sides of the courtyard with mosaics. Due to damage caused by the Mongols and Timur, only the western portico and a small section of the northern one retain the original mosaics. 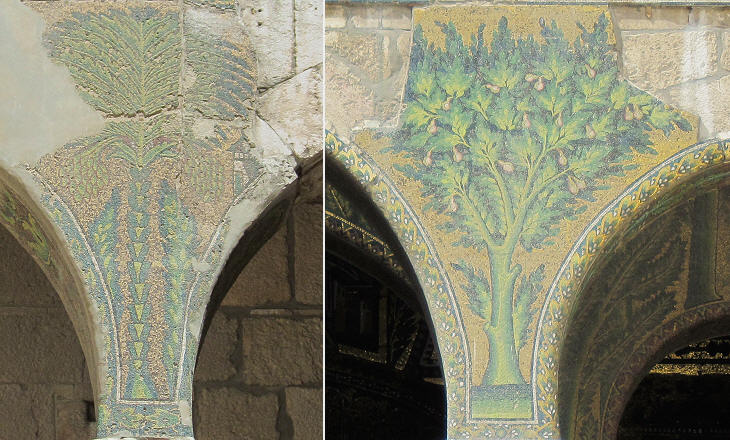 Mosaics depicting a palm (left) and a pear (right)

The mosaics depict a heavenly landscape with trees with their fruits, rivers with boats and elaborately designed palaces and pavilions, but because of the Muslim prohibition of representing human beings and animals, there is neither a bird singing on a tree, nor a sailor in control of a boat. Maybe these mosaics inspired the construction of Qasr al-Hayr al-Sharqi, a palace in the Syrian Desert, which was built a few years later. The visionary aspect of this landscape is enhanced by the gigantic size of the trees and by their luxuriant foliage.
Similar to Byzantine mosaics (and to those in Ravenna and Rome) the subjects are depicted on a golden background. 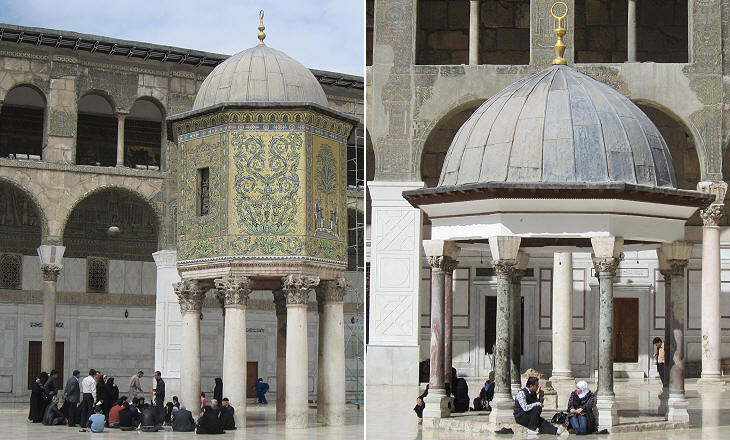 Buildings in the courtyard: (left) Khazne (Treasury); (right) Dome of the Clock

A fountain for ablutions was built at the centre of the courtyard, but it was not enough to "fill" that large empty space; for this reason towards the end of the VIIIth century two small pavilions were built near the northern corners of the courtyard (their domes belong to a later period); their design, size and location (which is not aligned with the central fountain) show a careful analysis of the issue and a very good solution. 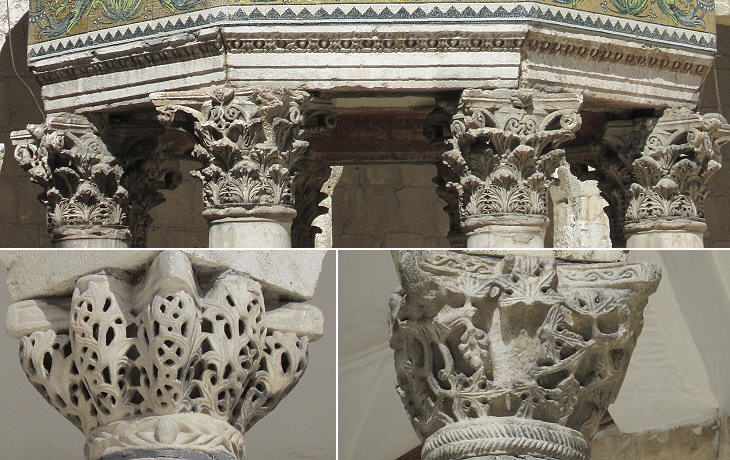 Ancient columns of the same size and classic Corinthian capitals were utilized to support the Treasury, while for the other pavilion the architects chose coloured columns of different length and Byzantine capitals of different shape; all these materials came from the ancient temple and from the changes made to turn it into a church. 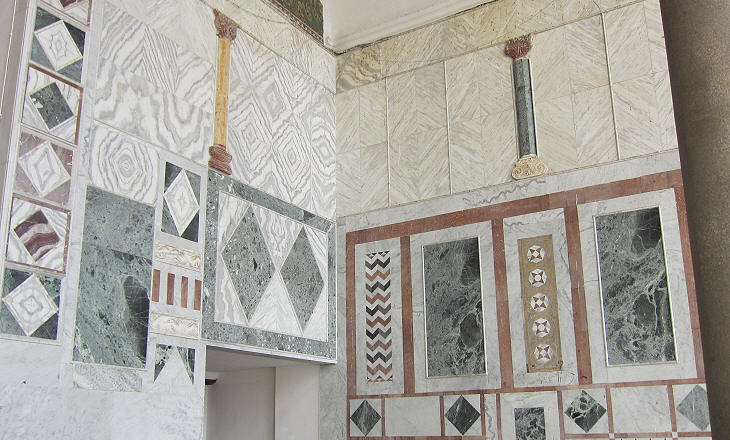 While the interior of the western portico was decorated with mosaics similar to those in the courtyard, the interior of the eastern portico was faced with marble panels from the ancient temple; some of them were rearranged to form geometrical patterns, while others retained their original juxtaposition which created an optical effect due to the reflection of the same veins. 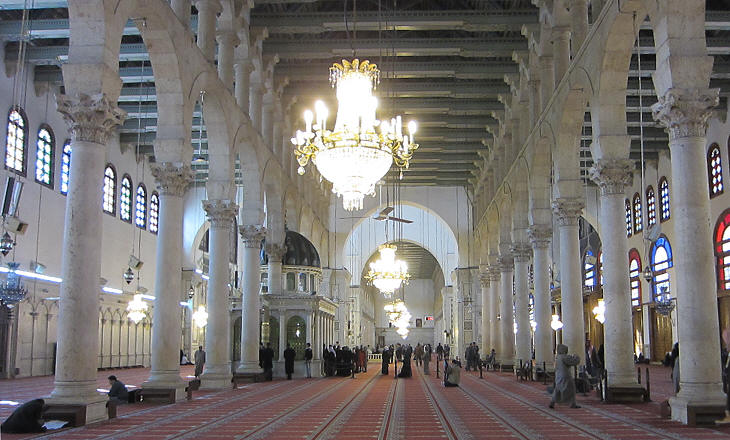 Interior (southern wall on the right side)

The structure of the building itself was very particular; it is an oblong square; there are three rows of columns in it; in the middle there was a dome. (..) The Turks call this the moque ot St. John Baptist, but the Christians say, that it was dedicated to John Damascenus, whose body is in it. Pococke
The prayer hall was built making use of the long southern wall of the ancient structure; this wall faced Mecca and three mihrab (niches) were opened to indicate the direction of prayers; the width of the hall is more than three times its length and it is divided into three naves by ancient columns; a small Ottoman pavilion houses the head of St. John the Baptist (Yahya for the Muslims). 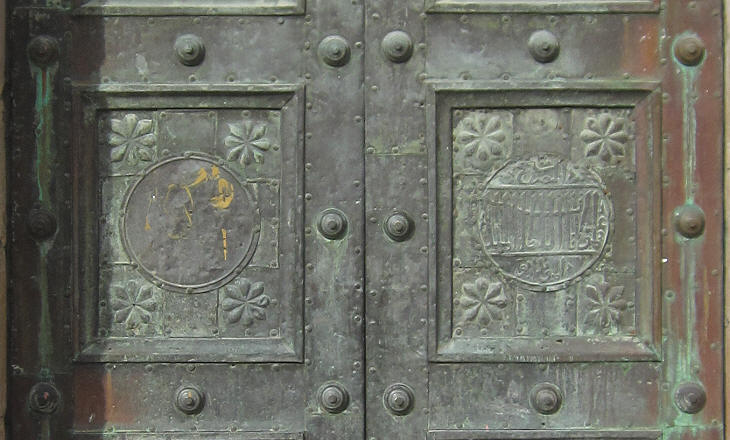 The Umayyad Mosque is visited by masses of Shia pilgrims because the prisoners of the Battle of Karbala were kept and eventually killed in a jail located in the eastern section of the ancient temple; the battle occurred in 680 and the Umayyad Caliph Yazid defeated the supporters of Husayn Ibn Ali, who is regarded by the Shia as the Martyr of Martyrs. When these events occurred the mosque was yet to be built; it now houses a shrine to the Shia martyrs near its eastern entrance.

You may wish to see Anjar, an Umayyad town in Lebanon.