- A Walk to Mount Qassyoun
(mosaic in the Umayyad Mosque) 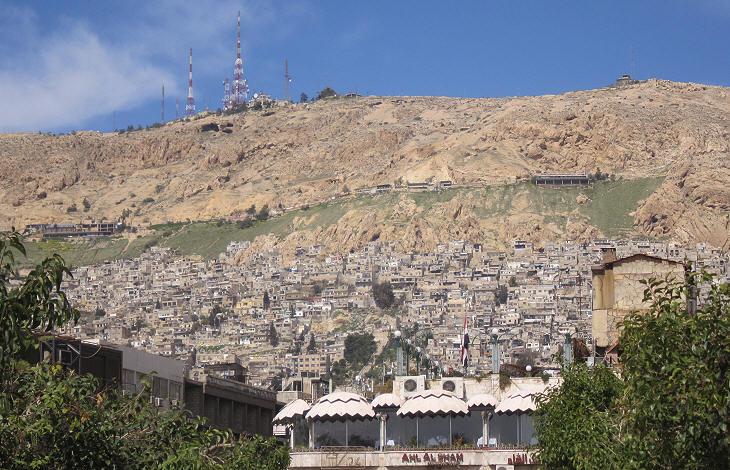 View of Mount Qassyoun seen from the quarter of the embassies

Mount Qassyoun (1,150 mt/3,774 ft) is situated a few miles north-west of the Old Town of Damascus; today it is a mass of bare rock and its lower slopes are covered with poor dwellings; the site was probably very different when Prophet Muhammad ascended it to have a commanding view over Damascus or when it was chosen by Sufi masters for their ascetic practices. 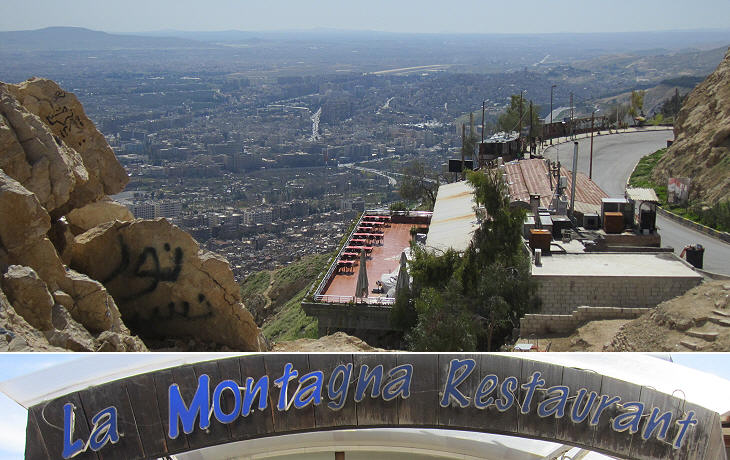 Today the inhabitants of Damascus choose Mount Qassyoun for their picnics and those who can afford it for a meal in one of the luxury restaurants which have been built in commanding positions; the best time to go there to see Damascus is after midday. 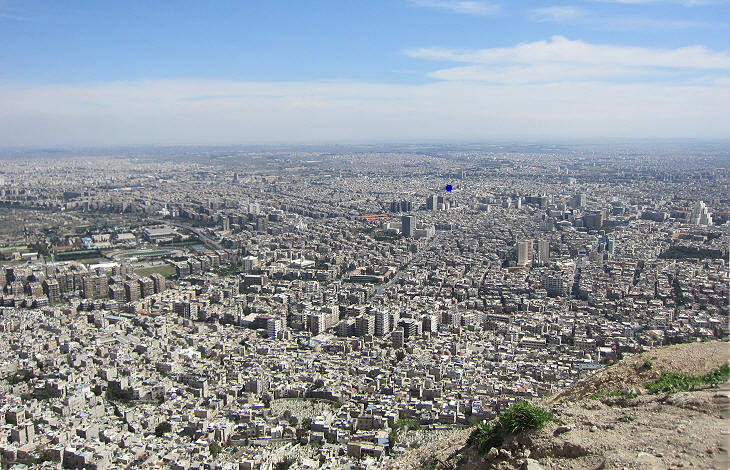 According to tradition Muhammad was so impressed by the view of Damascus surrounded by Ghouta, its very fertile oasis, that he decided not to enter the city because "one cannot enter Heaven twice". Today Damascus has a population of 4,000,000 and its oasis has been replaced by concrete. 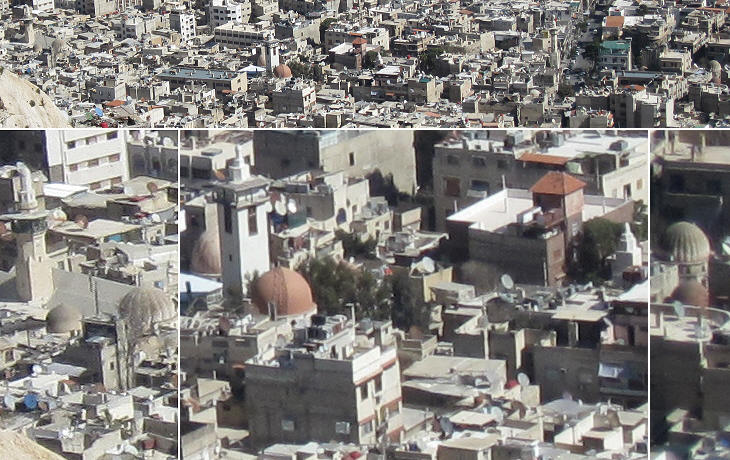 The most pleasant gardens are on the foot of the mountain about the village of Salheia, to the north west of Damascus; for being on a descent, they have a great command of water from the canal Jedid; so that there one sees the best water-works.
Richard Pococke - A Description of the East and Some Other Countries - 1745
While the monuments of the old town are barely visible from Mount Qassyoun, those of Salihiye, for many centuries a separate town at the foot of the mountain, are very close and they actually can be seen better from Mount Qassyoun, than at close range because of the modern buildings which replace the gardens seen by Pococke. 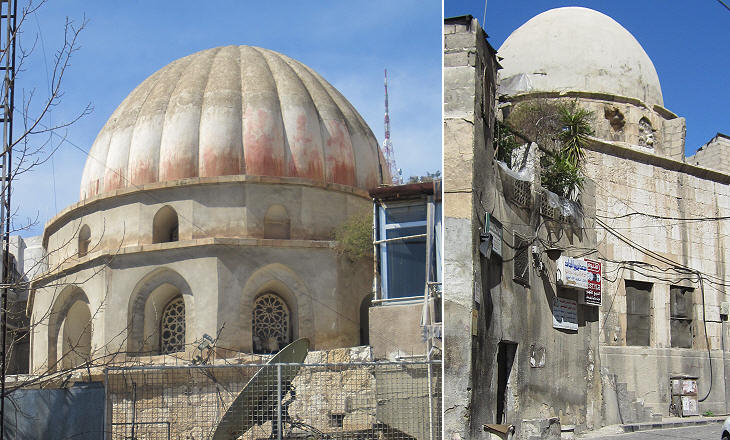 Salihiye was founded in the XIIth century by refugees from Palestine at the time of the Crusades; later on followers of the Hanbali school of Islam chose it as their residence; this explains the presence at Salihiye of a large number of medreses (Koranic schools) along the main street which is actually called Medrese Street; the small town acquired the fame of being a holy site and many qubba, domed square mausolea, were built at Salihiye; it is estimated that the town, which was protected by walls, had some seventy religious buildings. 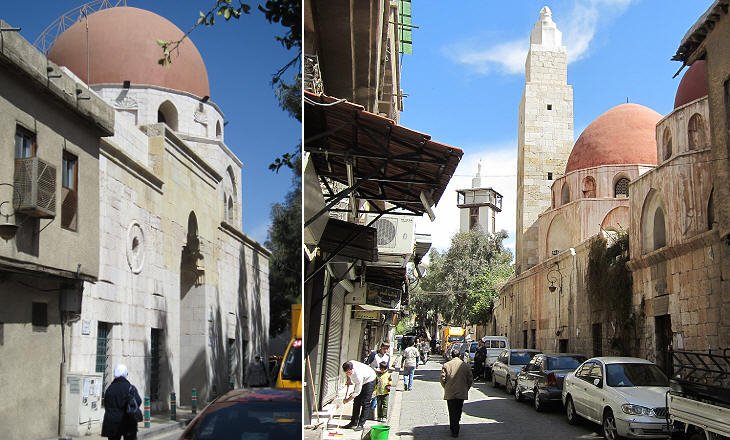 The monuments of Damascus are characterized by the use of ablaq masonry, i.e. alternating courses of white ashlar and black basalt stones; in Salihiye however this technique is seldom used and the prevailing colours are the white of the limestone walls and the red of the domes (see also the image used as background for this page). 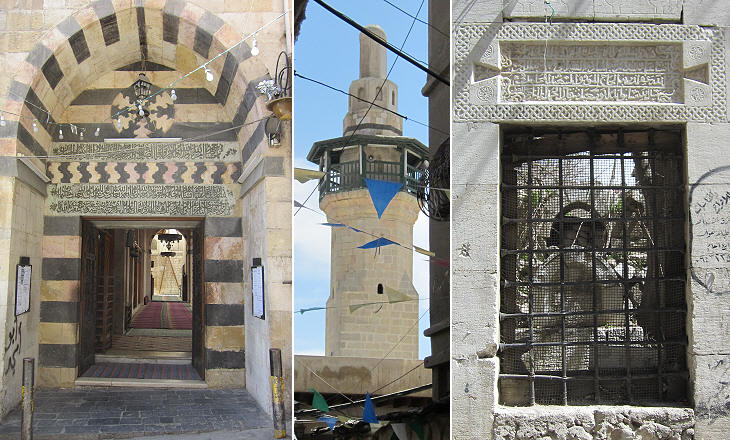 Saladin is buried in a mausoleum near the Umayyad Mosque, but members of his court were buried at Salihiye; his wife Ismat Khatoun was buried in a new mosque; she was the daughter of the governor of Damascus who asked Nur ad-Din, atabeg of Aleppo for help against the Crusaders; she then married Nur ad-Din and after his death Saladin, his valiant general; by marrying her Saladin legitimated his right to succeed Nur ad-Din. This mosque is similar to those of Damascus in the use of ablaq decoration in the portal (but not in the minaret). This mosque was built in 1202-1213 for the followers of the Hanbali school of Islam; it is one of the oldest surviving mosques of Damascus; its minaret and its plan, which is characterized by a large arcaded courtyard, resemble those of the Umayyad Mosque.
Ahmad Ibn Hanbal was one of most important Sunni theologians; in his writings he stated that the inhabitants of Paradise were able to see God and that this was their highest reward. 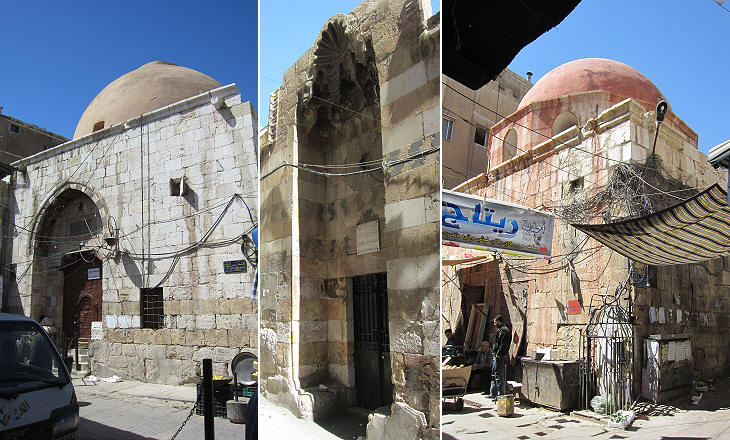 Towards the end of the XVth century Salihiye lost its status of independent town and became a (rather distant) borough of Damascus; today some of its historical buildings have disappeared while others have been turned into shops, health centres or warehouses.
The main street is known as Friday Market because its busy market is open also on Fridays, with just a few shops closed for ten minutes during the midday prayer. 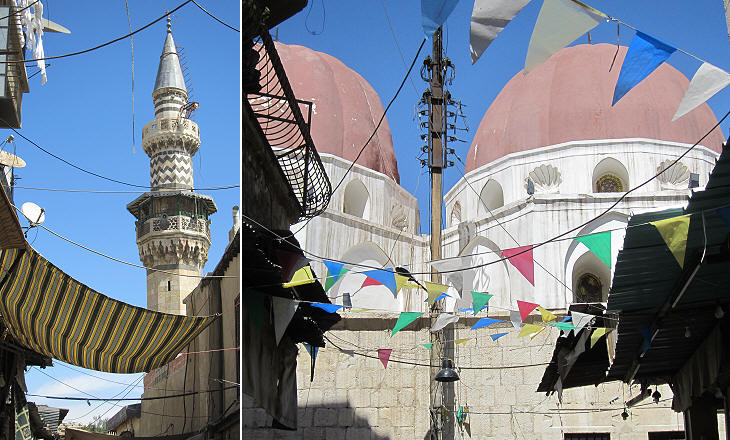 Mohi al-Din Mausoleum was built in 1516 by Ottoman Sultan Selim I to house the tomb of Ibn al-Arabi (1165-1240), a famous mystic and philosopher who was born in Andalusia and who, after a life of travels in many Muslim countries, spent his last years in Salihiye; he was given the appellation of Mohi al-Din (he who revives faith). Sultan Selim ordered the construction of the complex which included a detached imaret (soup kitchen) immediately after having conquered Damascus; the decision to honour a great Muslim theologian was not without a political purpose; the Ottoman sultans were not regarded by many Arabs as being faithful Muslims; Constantinople, their capital, was seen as a Greek city and the sultans were reproached for their religious tolerance and for marrying women of Christian origin; by building this mausoleum Sultan Selim wanted to appear as a very pious man. 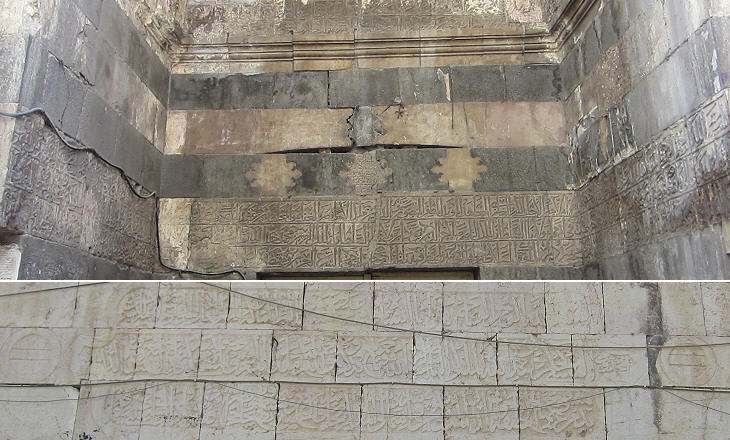 Salihiye: (above) detail of portal near Mohi al-Din Mosque; (below) inscription at the Mausoleum of Amir Kajkun al-Mansuri

The mausoleum of Mohi al-Din was the first and almost the last Ottoman monument of Salihiye; the new rulers were more interested in giving an Ottoman appearance to the Road to Mecca or in building Dervish monasteries such as Tekkiye Suleymaniye, rather than spending money on what had become a neighbourhood void of importance and too much characterized by buildings of the Ayyubid period. 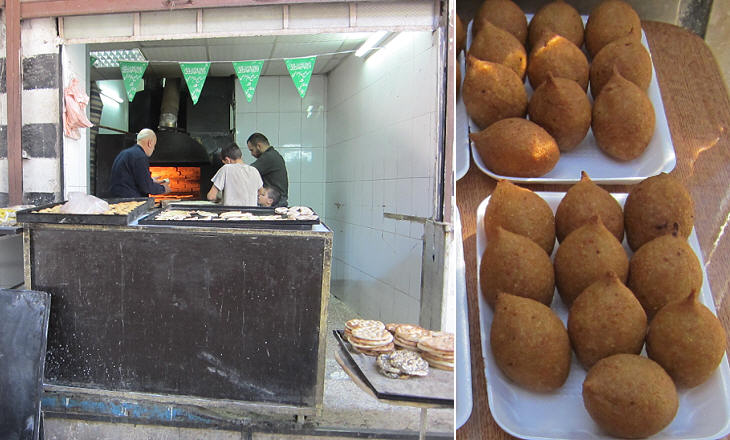