Today Xian is a large city with a population of over 8,000,000. It is located in a central position near the Yellow River valley. It became the first capital of unified China during the rule of Emperor Qin Shi Huang (221-210 BC) and it remained the capital of the country for many long periods. 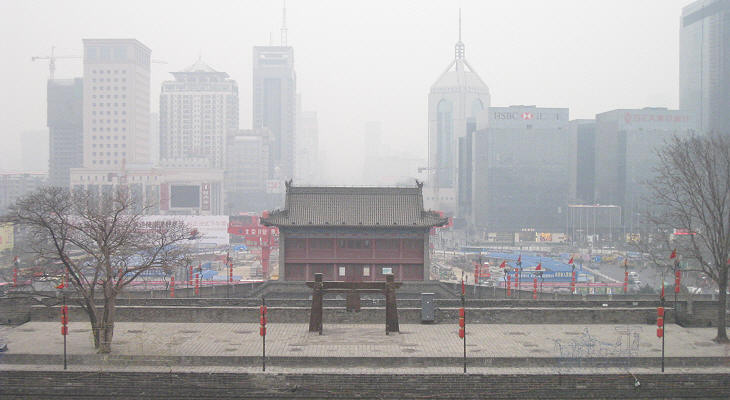 The image shown above could have had the following caption: Past and present of Xian; it does not because the monument shown in the foreground was built at the same time as the blocks of buildings shown in the background. It is a very modern reconstruction of a lost tower which protected the south entrance to Xian. 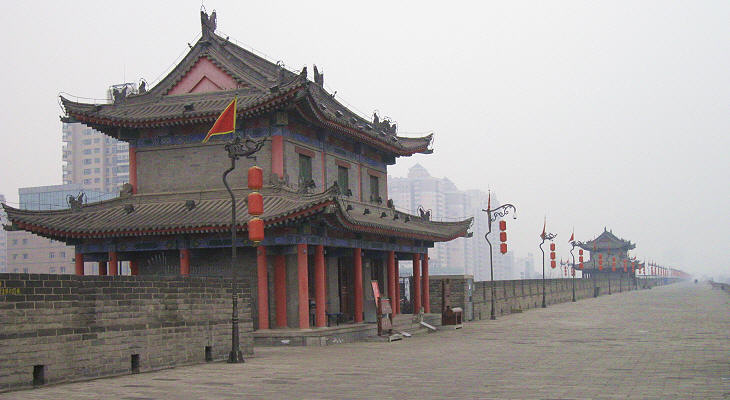 View of the walls

The walls which can be seen at Xian were designed by the Ming Emperors in the late XIVth century; at the time Xian was no longer the capital of the empire and the walls surrounded an area which was smaller than that reached by the city at the apex of its expansion during the Tang dynasty (618-907). The walls (and the city inside them) were designed in line with the rules of Feng-shui, an ancient Chinese practice aimed at determining the best layout to enjoy flows of positive energy. For this reasons the walls of Xian have a plain rectangular shape with the long sides on a north-south axis. 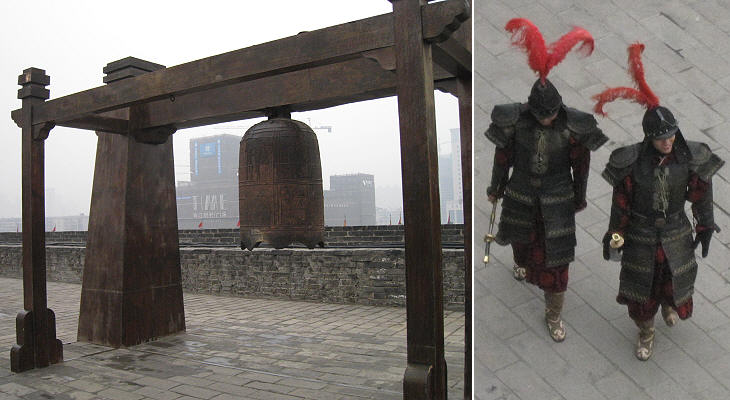 The current walls of Xian are mainly a modern reconstruction of those of the Ming period. They are provided with all sorts of facilities for tourists: shopping malls, cafès, places where they rent bikes, etc.; unfortunately both the view outside the city and that inside it are not evocative in the least of the city's past. Authorities have tried to make up for this lack of atmosphere by having a few guards dressed in ancient Chinese costumes and by placing some traditional bells which provide visitors with photo opportunities. 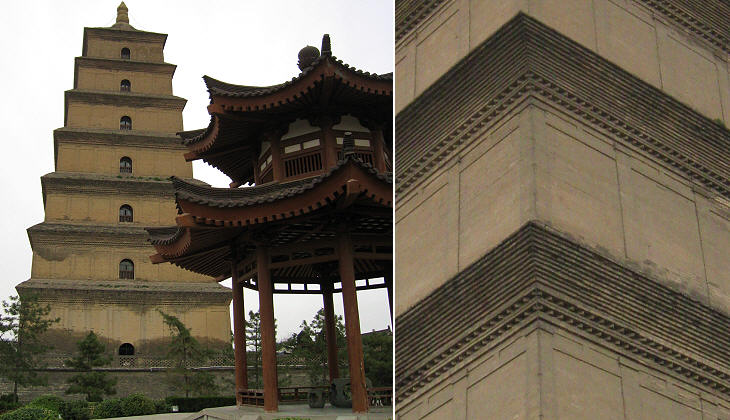 Buddhist practices were first introduced in China in the Ist century AD, but only in the VIIth century did Xian become an important centre for the spreading of this religion/philosophy in China; at that time and with the help of Tang emperors, Xuanzang, a Chinese monk who extensively travelled through Central Asia and India, set up at Xian a centre for the translation of Sanskrit texts. A large pagoda was built to house original texts and statues of Buddha. Notwithstanding a partial reconstruction during the Ming dynasty, the building retains its original neat design.
The Great Wild Goose is not the only ancient pagoda of Xian: the Small Wild Goose Pagoda is located outside the walls, while another similar pagoda stands near the Southern Gate. The wild goose is a personification of Buddha; a goose landed at the sites of the buildings. 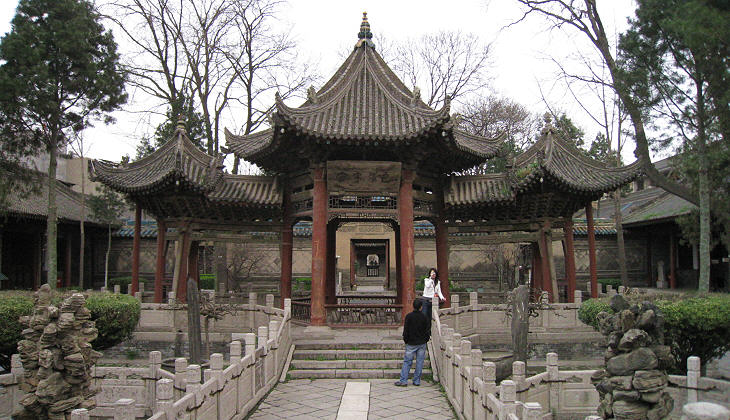 Almost at the same time as the great development of Buddhism in Xian, the first Muslims made their appearance in the city; by 661 the Arabs had brought Islam to most of Persia and parts of today's Afghanistan and Turkmenistan; these countries had trade links with China; foreign merchants lived in a neighbourhood of Xian where they were allowed to practice their religion. The current set of buildings making up the Great Mosque of Xian dates back to the XVth century (with later additions), but it replaced a previous mosque. The mosque resembles a traditional Chinese Buddhist temple, but some aspects reveal its Muslim character. 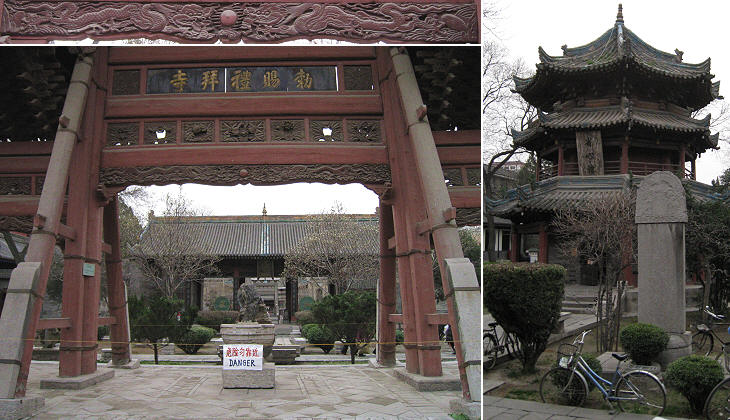 Great Mosque: (left) portal at the entrance and above this image enlarged view of its dragons; (right) "minaret"

The mosque hall is preceded by a series of open pavilions and gates which are aligned on an east-west axis; this because the need to ensure prayers were oriented towards Mecca prevailed on the Feng-shui north-south axis; the Muslim prohibition of portraying people and animals, is almost entirely complied with (some dragons symbolizing the Imperial power make their appearance here and there).
The minaret is replaced by an isolated pagoda. 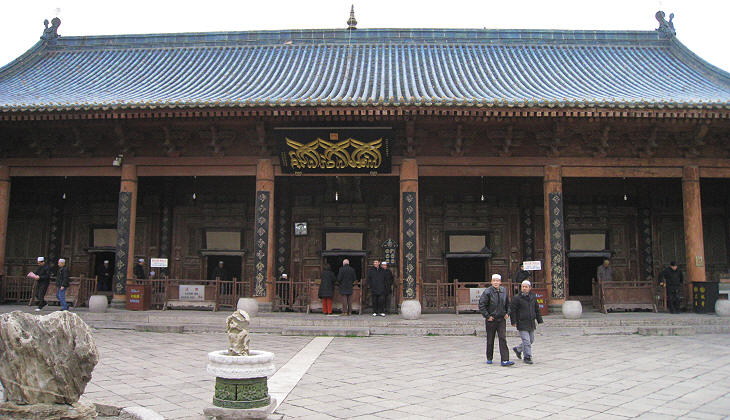 The Muslims of Xian belong to the "Hui ethnic group": although their very distant origin could be traced back to Mongol and Turkish ancestors, the 1949 definition of "ethnic" minority is a heritage of the Communist ideology, which pretended to ignore religion.
Hui speak Chinese, but they learn some Arabic as part of their religious education; men wear a small white cap, similar to those worn in Central Asia. 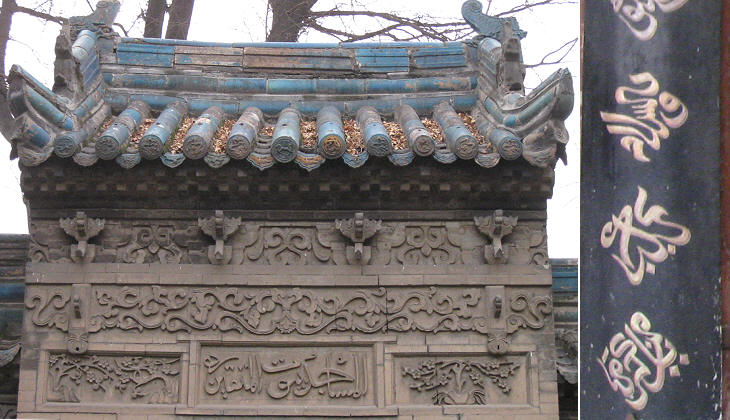 The Great Mosque and its ancillary buildings are decorated with floral motifs and a few inscriptions in Arabic, some of which are written in a way that they resemble Chinese characters. 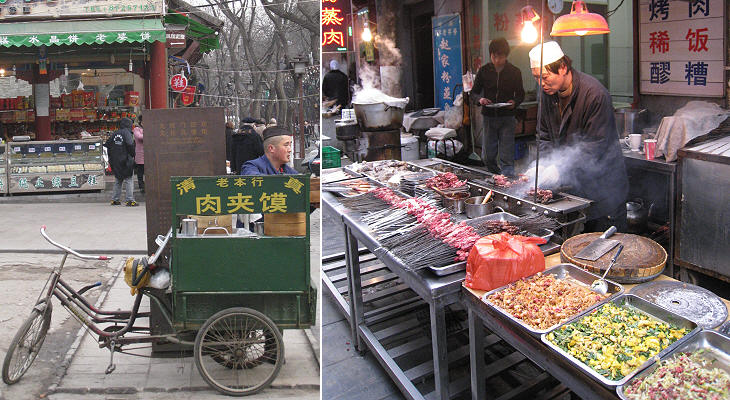 In the Muslim quarter

The Hui follow strict Muslim dietary rules; this means a major deviation from traditional Chinese cooking, in which pork meat plays a major role. It means also, that unlike the other Chinese, Hui are not fond of fried scorpions and crickets. 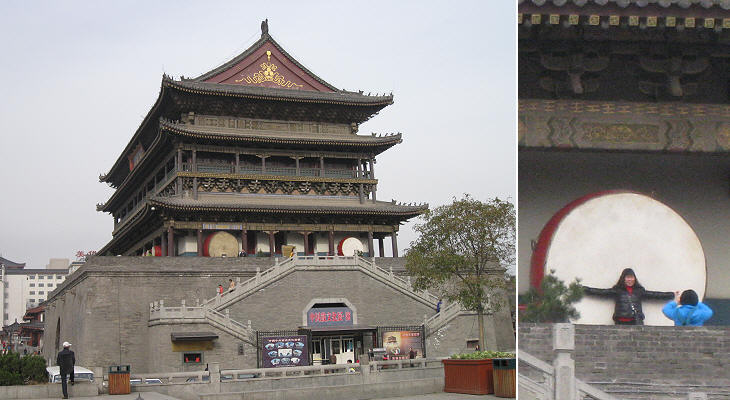 Xian is a walled town, but there is not much inside its walls which is evocative of its past or at least picturesque (apart from the Muslim quarter). The Drum and the Bell Towers, both built in the 1380s constitute a remarkable exception to the otherwise very modern urban landscape of Xian. The sound of the bell woke up the inhabitants of Xian at dawn, whereas the drum signalled the end of the day. 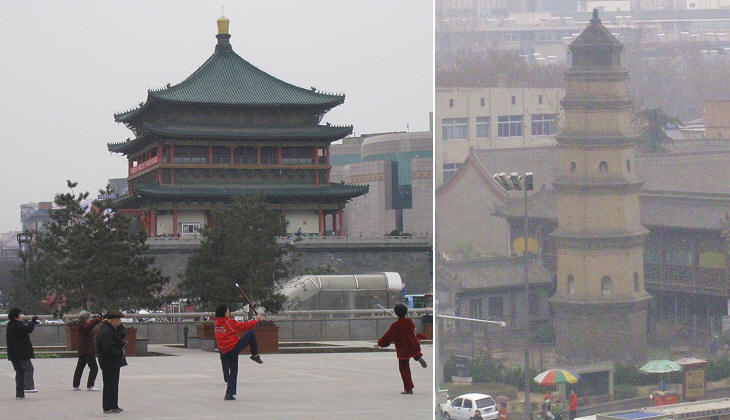 (left) Bell Tower; (right) a pagoda near the Southern Gate

In the morning it is not unusual to see retired citizens practicing traditional dances/exercises: the choice of the gridlocked roundabout (rotary) surrounding the Bell Tower probably is not the healthiest one.

The image used as background for this page shows a detail of the Great Mosque.