You may wish to see an introductory page to this section or the pages on the Forbidden City first.

Historians have identified more than twenty dynasties in Chinese history. Usually the transition between dynasties was caused by an invasion or a rebellion; very often the new rulers tried to erase all references to their predecessors, by destroying their palaces and funerary monuments and by relocating the capital of the country. From this point of view the accession to power of the Qing dynasty which took place around 1644 was marked by a more respectful approach towards what had been done by the previous rulers, the Ming Emperors. This occurred because the Qing, claimed to be the avengers of the last Ming Emperor who was overthrown by an internal rebellion and who committed suicide. The Qing were the leaders of the Manchu, an ethnic minority group, and they did not bring significant changes to Chinese art: this explains why the tombs of the Ming emperors were not modified. 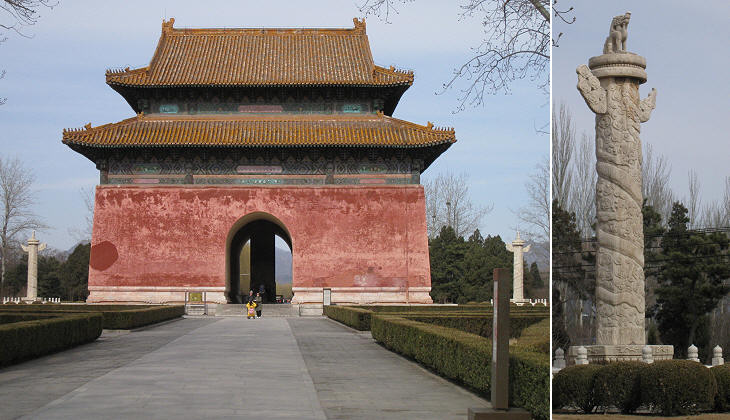 (left) Shengong Shengde Stela Pavilion; (right) one of the "huabiao" (pillars of glory) placed near the pavilion

Ming Tombs: passing through an ornamental gate with five openings, built of white marble in 1541 in 10 min. we reach a large red gate, affording a fine view of the valley, which is surrounded by pinnacled mountain walls and is open towards the S. only. Farther on is a red pavilion covered with yellow tiles, containing a stone "Pei" or tomb-monument 12 ft. in length (inscribed stone tablet resting on a tortoise, the symbol of eternity).
Karl Baedeker - Handbook for Russia with Teheran, Port Arthur and Peking - 1914
The tombs are situated in a valley some thirty miles to the north of Beijing; the chosen site complied with Feng shui rules, the set of ancient astronomical/philosophical doctrines which were embedded in Chinese culture. The access to the valley is from the south; the beginning of the area where the tombs are located is announced by a large gate; detailed funerary processions started from this point.
The Qing emperors added triumphal columns which are decorated with reliefs showing an entwined dragon; they support the statue of a hou, a mythical creature having the habit of watching the sky. 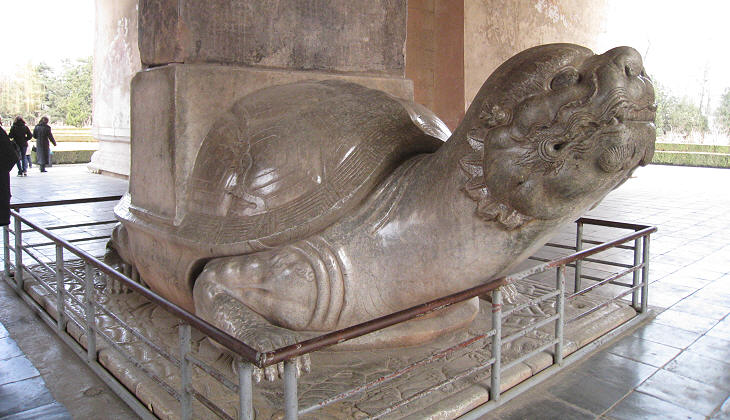 Another addition/restoration made in 1785 by the Qing is the gigantic statue of a tortoise supporting a tablet celebrating the dead emperors. This beast was a symbol of water and of the North, but in the context of a burial site it represented longevity. Although the representation of animals (true or mythological) spans over the whole history of China it was particularly frequent during the Qing dynasty.

Final part of the sacred way

Passing two elaborately-worked stone pillars 15 ft. high, we enter the Sacred Way or Avenue of Animals, consisting of 32 gigantic figures of animals and men, each carved from a single block of marble (early 15th cent.). Baedeker
In architecture symmetry is closely associated with beauty and with conveying to the viewer a feeling of power; this concept was common also in China and can be observed in the Forbidden City, but it was departed from in the design of the avenue leading to the tombs. In order to lead astray the evil spirits, the avenue makes a bend. We first see four lions, then four rams, four camels, four elephants, four fabulous monsters, and four horses. Baedeker
The tombs were guarded by pairs of animals which were portrayed standing and seated; these different postures meant day or night services to the dead emperors. The finest statues are those of mythical beasts or of actual ones, but treated with a lot of fantasy, such as the lions, while those portraying horses and camels are uninspiring. The statues date from the XVth century. 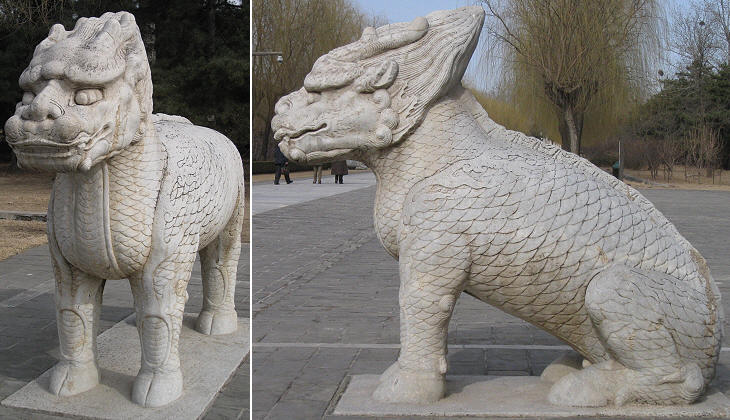 The xiechi (or xiezhi) is a horned cat that was believed to have the power to discern right and wrong and to keep evil spirits away. The overall design of the site does not fit into a specific belief, although Ming emperors are known for having blandly favoured Buddhism. It can be regarded as an example of religious syncretism, the blending of different traditions. 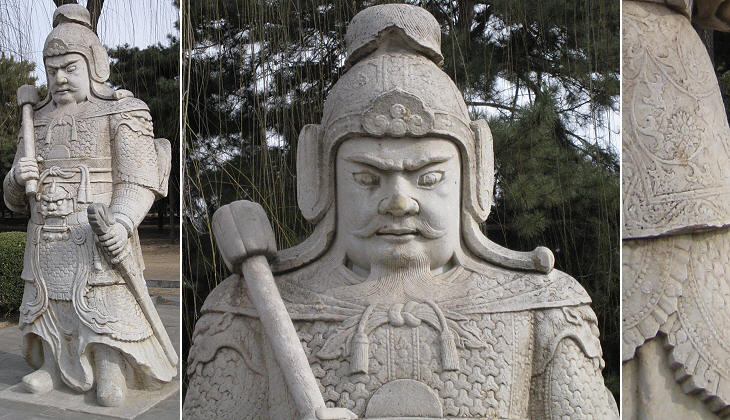 Beyond these comes a series of military and civil mandarins. From this point a walk of 1 hr. brings us to the Tomb of the Emperor Yongle, the finest and largest of the 13 Ming tombs. It is hardly worthwhile going on to the other tombs. The tumulus is covered with cypresses, oaks, and firs, and is about 1 M. in circumference. To the S. of it lies the Temple area, in which, on a terrace of white marble, stands the main hall, borne by 32 columns of teak. 36 ft. in height. Baedeker
The statues guarding the tombs include six pairs of civil and military officials. These statues are called wengzhong after a mythological Ruan Wengzhong who distinguished himself in fighting the Huns. The military officials wear an elaborate armour, hold a weapon in the hand and have a sword at their waist; they look determined and powerful. 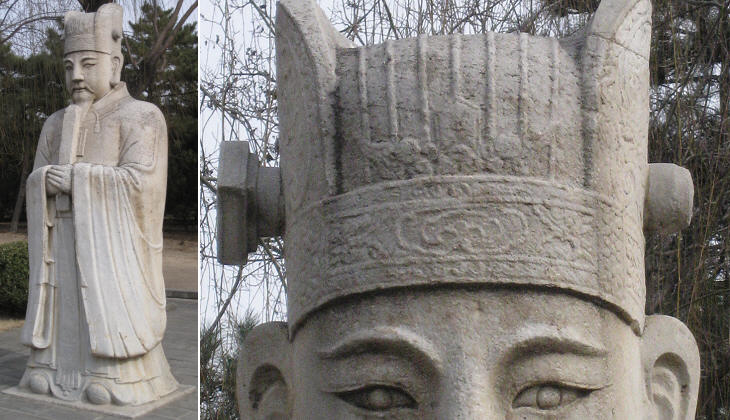 A civilian officer and a detail highlighting his headdress

The civilian officers wear official and very unusual hats and hold the court sceptre in the hand; they have the attitude of a gentle philosopher. 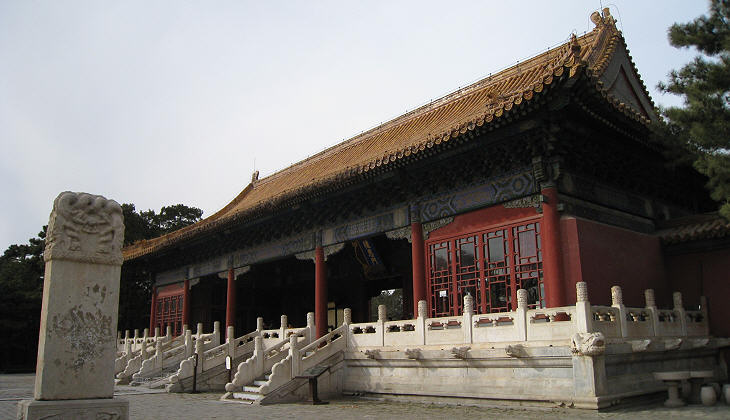 The end of the long alley (Shinto) guarded by the statues was also the end of the common path of the funerary processions; there are thirteen tombs of Ming emperors in the valley. That of Emperor Yongle (1402-24), who moved the capital from Nanjing to Beijing, is accessed through Ling En Gate, a platform surrounded by balustrades, very similar to the gates of the Forbidden City. 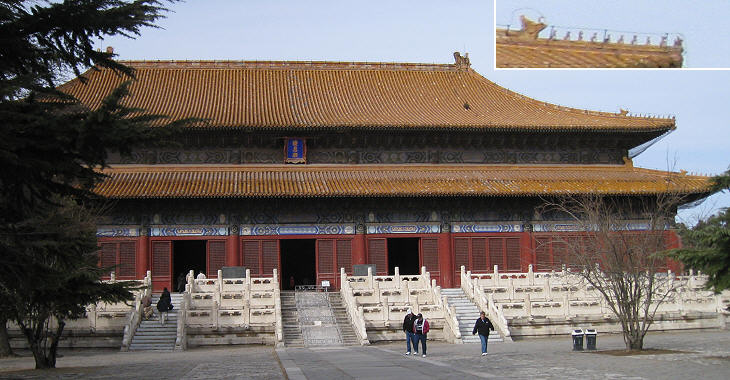 The gate leads to a courtyard closed by a larger pavilion; the yellow tiles of the roof and the series of nine glazed ceramic figures are a sign that the building was meant for an emperor. 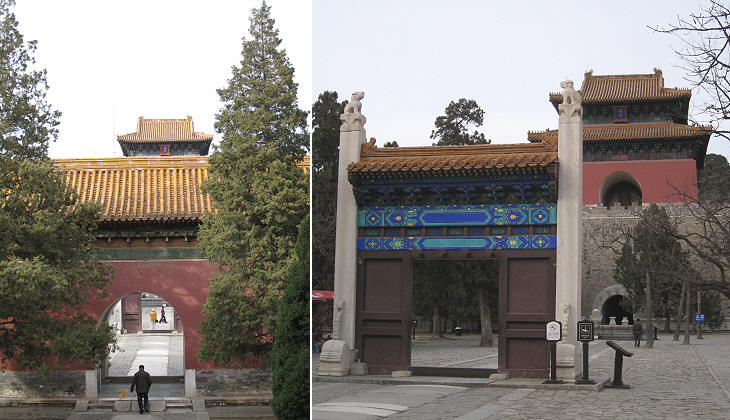 Neihong Gate gives access to the last courtyard, at the centre of which a gate with a step prevented evil spirits from reaching the final building, a sort of tower. Visitors leaving the site are alerted to cross the step with the same foot they used the first time. This brings luck or at least it avoids unlucky consequences. 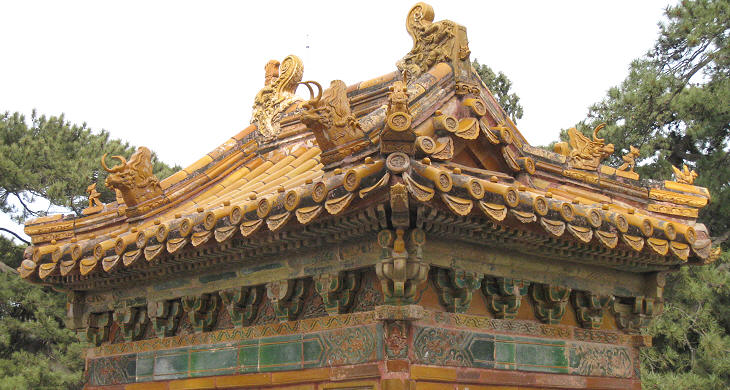 Detail of the Incense Burner

The final ceremonies took place in the last courtyard where there is an incense burner similar to a small temple: it is made of yellow and green glazed materials. The actual tomb of Emperor Yongle is inside a mound, a reference to a tortoise, symbol of longevity and eternal memory. 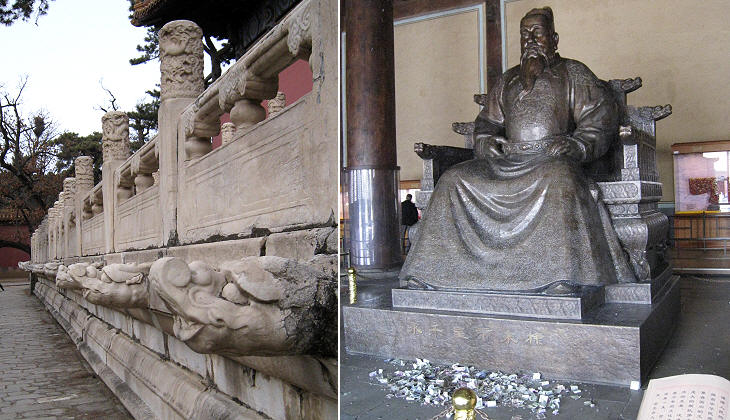