The Citie Pequin is questionless the most spacious and best peopled in Asia, if not in the world: since it has ninety English miles circumference: it includes many stately buildings and Mausoleas, 24000 are numbered of the Mandarins Sepulchers, the meanest of which, is not without beauty: and a no lesse number of little guilded Chappells, beside 3800 Temples devoted to Idolatry. It has as many Gates and Posterns as be days In a yeer: sixscore Bazzars or Market-places; above a thousand Bridges of stone: and such water as is every where potable.
Sir Thomas Herbert - Some Yeares Travels Into Divers Parts of Asia and Afrique.. - 1638
The Purple or Forbidden City, so named on account of the purplish colour of its enclosing wall, contains the Imperial Palace and is open to only a few privileged persons. All that the ordinary traveller will see are the yellow roofs (yellow being the imperial colour) of the palaces and temples overtopping the wall.
Karl Baedeker - Handbook for Russia with Teheran, Port Arthur and Peking - 1914
The foundation of the Forbidden City and more in general the overall layout of Beijing are attributed to Yongle, the third emperor (1402-1424) of the Ming Dynasty. Beijing was given a rectangular shape with the longer sides on a north-south axis; inside the city walls, an area having the same shape was designated as the residence of the emperor and the site of key ceremonies. Because the access to this part of Beijing was protected by walls and was restricted to members of the court it became known as the Forbidden City.

Gate of Heavenly Peace leading to the entrance to Forbidden City

The present entrance is by the Gate of Celestial Peace (T'ien-an-men), on the S., which leads into a park planted with fir-trees and containing the Temple of the Imperial Ancestors and the Altar of the Tutelary Deities. Baedeker
The Forbidden City was placed near the southern walls of Beijing; this choice was in line with Feng shui (literally wind-water) rules, the set of ancient astronomical/philosophical doctrines which played a major part in Chinese architecture. Tiananmen, the Gate of Heavenly Peace, with the portrait of President Mao Zedong has become one of the symbols of China; its design has features which are common to most buildings inside the Forbidden City: rectangular shape, double roofs, concave lines and series of nine elements, nine being the number indicating the emperor.
Today the view is somewhat diminished by the excessive size of the modern square designed after the Chinese Revolution; its width flattens the buildings which surround it. You may wish to see Naqsh-e Jahan, the main square of Isfahan. 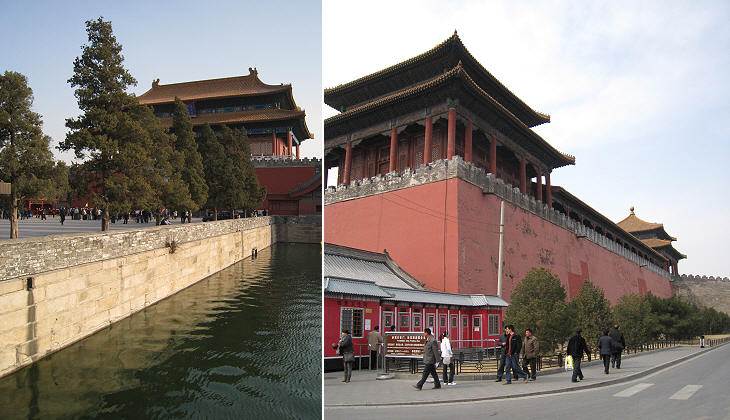 The Forbidden City is surrounded by very high and thick walls and by a moat; both had no doubt a defensive objective, but probably their main aim was to emphasize the role of the emperor by shielding him from the view of his subjects. The whole of Beijing became a "Forbidden City" during the Qing Dynasty (1644-1912) when living inside the city walls was allowed only to members of the Manchu clans who supported that dynasty. 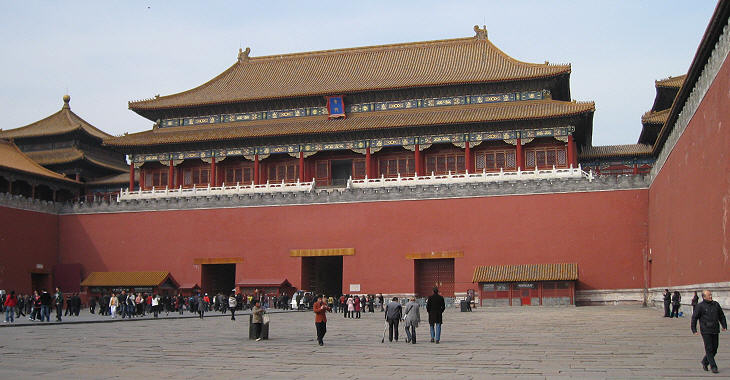 Rear view of the Meridian/Noonday/Southern Gate

Visitors proceed straight on and reach the Noonday Gate, the entrance proper to the Forbidden City. Here begins a series of halls stretching towards the N which are chiefly used for audiences and similar occasions, and are separated by courts and monumental gateways. (..) To the N. and on both sides of the above-mentioned buildings are the palaces of the Emperor, the Empress, the imperial children, and so on. Baedeker
The Forbidden City was divided into two areas: the Outer Court, where ceremonies took place, and the Inner Court which was the residence of the Imperial family.
Different scales were used for the design of the two courts; the Outer Court is characterized by huge halls and vast courtyards, while the Inner Court has a more ordinary appearance with low buildings and narrow alleys. You may wish to see Topkapi Sarayi, the palace of the Ottoman Sultans at Constantinople. 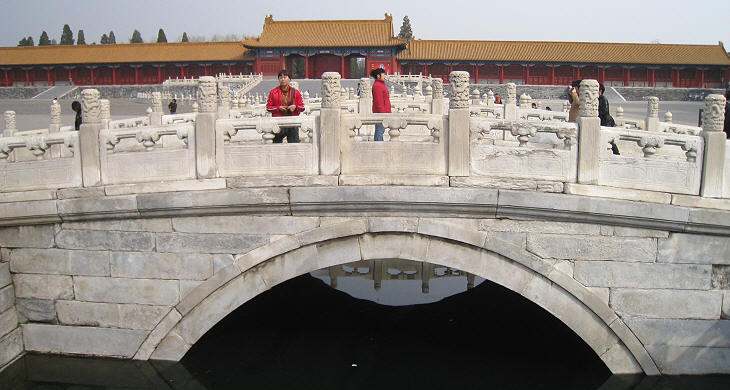 One aspect which characterizes the Forbidden City is the repetitiveness of some details; in the first courtyard five decorative bridges cross a small canal (Inner Golden Water River); their balustrades are identical to those of the hall terraces, not only in the Forbidden City, but also in many other monuments of Beijing. 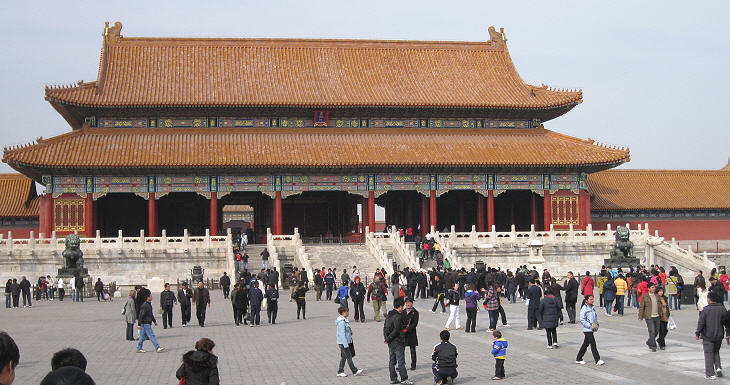 An aspect which strikes today's visitor is that everything has a very new appearance, notwithstanding the history of the Forbidden City. It was seized by rebels in 1644 and two years later occupied by Manchu troops, who set fire to it. In 1860 it was abandoned by the court during the Second Opium War; in 1900 troops of the Eight-Nation Alliance (Austria-Hungary, France, Germany, Italy, Japan, Russia, the United Kingdom, and the United States) pillaged it. Between 1937 and 1945 Beijing was occupied by the Japanese; in 1949, at the end of the Chinese Civil War, Beijing was conquered by the Communist armies. During the so-called Cultural Revolution (1966-76), the Forbidden City was regarded as a symbol of tyranny and the Red Guards did not manage to pull it down only because Premier Zhou Enlai sent troops to protect it.
Of all these events there is no apparent evidence in today's Forbidden City. 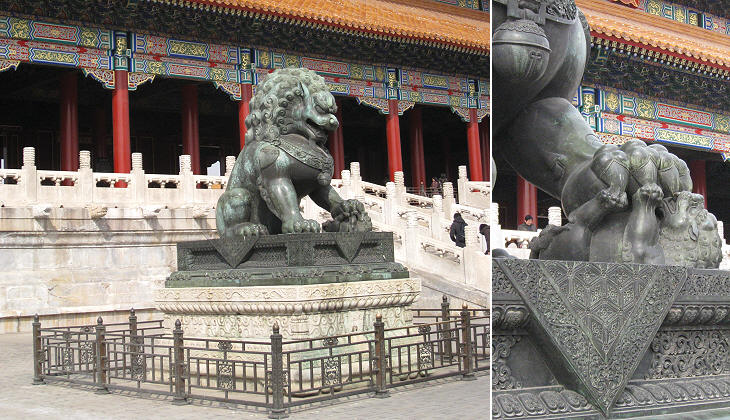 Gate of Supreme Harmony: bronze she-lion and detail of its cub

Qing, the last Chinese Dynasty, regarded the dragon as the symbol of the emperor and dragons show up in many parts of the Forbidden City. Ming, the dynasty which preceded Qing, was closer to Buddhist traditions; these had brought to China the Indian practice of placing statues of lions outside temples and royal palaces. Lions were unknown in China and it is said that dogs were used as models. The Gate of Supreme Harmony is guarded by a pair of bronze lions of the Ming era. They form a couple: the male plays with a globe and the female with a cub. Similar dog-like lions can be seen in Cambodia at Angkor.

On the way to the Hall of Supreme Harmony

The construction of the Forbidden City had to comply with many rules: a) the tiles of all the roofs had to be yellow, because this was the colour of the emperor (Yellow Emperor was the first - legendary - Chinese sovereign); b) the number of platforms upon which the main halls were built could not exceed three because in the Taoist scheme of things, the entire manifested universe is ruled by three; c) it was absolutely forbidden to design any series of four, because of Chinese tetraphobia (fear of number 4, which is regarded as unlucky); d) the orientation of the buildings was dictated by Feng shui. Notwithstanding all these constraints, those who designed the Forbidden City managed to achieve a very harmonious result. 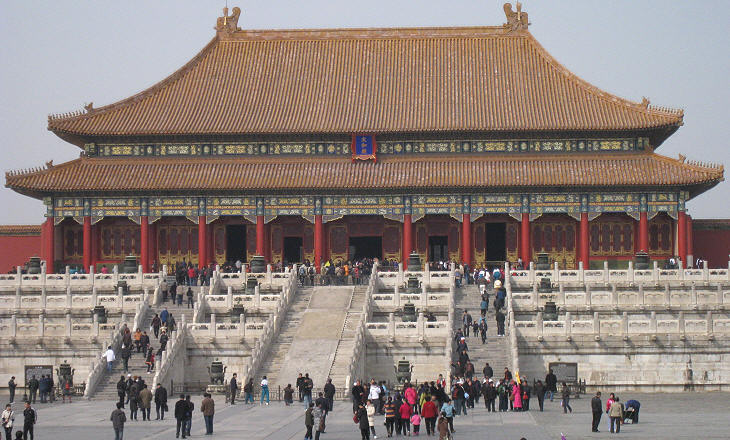 The Hall of Supreme Harmony is the largest hall of the Forbidden City: it was the site of the most important ceremonies, including the enthronement of the emperor; similar to the other buildings it has a wooden structure; this constituted a risk of fire: in the case of this hall seven fires are recorded, the last one in 1697.
This hall was the tallest building of the whole city, because strict laws limited the height of buildings outside the Forbidden City. 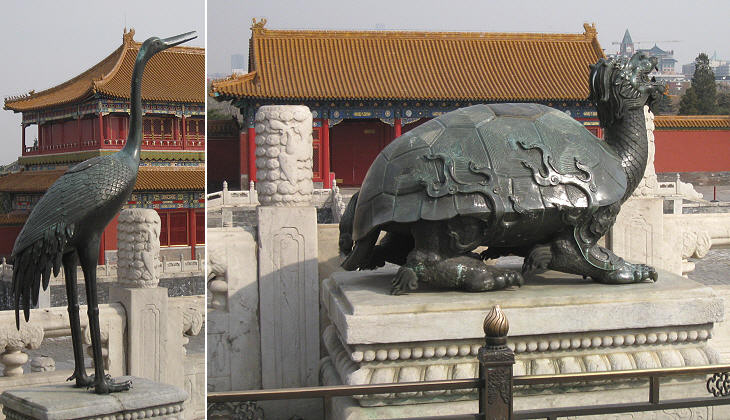 In addition to dragons and lions other bronze statues celebrated animals which had great relevance in Chinese tradition; the tortoise was a symbol of earth and sky, the flat belly being the former and the carapace the latter. A bird represented the Empress; its Chinese name is fenghuang which is generally translated "phoenix"; however the Chinese tradition depicts fenghuang as the "king of the birds", rather than the mythological bird (phoenix) which rose from its own ashes. These statues are not sheltered in any way and yet they do not show any signs of age. 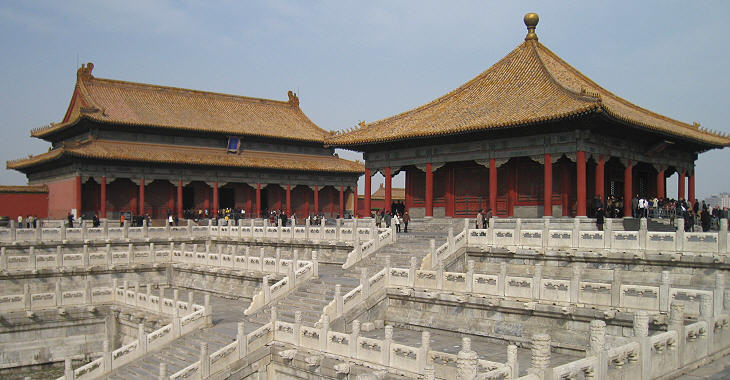 Two other halls are located on the same platform as the Hall of Supreme Harmony; they were probably used for rehearsing ceremonies (Preserving Harmony) and for providing the emperor with a place where to rest or wait before making his appearance (Central Harmony).