In 1259 Niccolò and Maffeo Polo, two Venetian merchants living in Constantinople decided to leave that city which was on the verge of being recaptured by the Byzantines. They relocated in the Crimea, where they had trading connections. In the following years they moved to Bukhara in Central Asia; their aim was to reach Tabriz, at the time a flourishing city of the Mongol Persian Ilkhanate; wars between the various khanates into which the Mongol Empire was split, forced the Polos to stay in Bukhara for three years during which time they became acquainted with local languages and social behaviour.
In 1264 they were invited to join a caravan going from Persia to the court of Kubilai Khan: he was the grandson of Genghis Khan and he claimed to be the supreme leader of the Mongols.
In 1266 when the Polos reached the court of Kubilai Khan, this had just been relocated eastwards, outside the Mongolian homeland, into Northern China. The new capital was called Dadu by the Mongols and Khanbalik by the Turks; later it was named Peking which means Capital of the North (and in recent years renamed Beijing). The city of Xian and its nearby parent city of Xianyang were at the end of trading routes with the West during the IIIrd century BC (Xianyang - Qin Dynasty) and between the VIIth and the IXth centuries AD (Xian - Tang Dynasty).

The Great Wall at Badaling (45 miles from Beijing)

The Polos returned to Venice in 1269 with a letter from Kubilai Khan to the Pope, which they delivered only in 1271 when, after the longest conclave in history, Pope Gregory X was elected. In his letter Kubilai Khan welcomed the arrival of Christian missionaries in his immense empire; the Mongols had managed to defeat Chinese and Muslims, but they were gradually being conquered by the superior civilizations of their subjects, including their elaborate religions; perhaps Kubilai Khan was interested in assessing the possible political advantages of introducing the Christian faith to his empire.
His appeal was let down by the Pope who sent only two Dominican monks with the Polos when they started their second journey to China. In 1274 the Polos arrived at Khanbalik without the monks who had preferred to cut short that dangerous journey, but with Marco, Niccolò's son.
They stayed in China for seventeen years and they finally returned to Venice in 1295. Marco Polo's account of his travels became a bestseller in Europe at a time when books were extremely expensive and were usually dealing with religious topics. 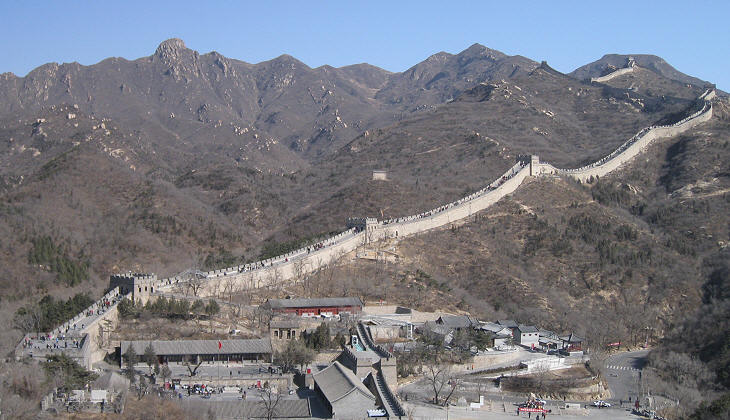 The busiest section of the Great Wall at Badaling

The grand khan usually resides during three months of the year, namely, December, January, and February, in the great city of Kanbalu, situated towards the north-eastern extremity of the province of Cathay; and here, on the southern side of the new city, is the site of his vast palace.
The Travels of Marco Polo (between 1271 and 1295) - translated by Henry Yule
Marco Polo did not mention the Great Wall in his book; this because the current Great Wall was built at a later stage and with the objective of preventing a second Mongol invasion. It would not have made sense for Kubilai Khan, who ruled over both Mongolia and China, to maintain a similar defensive structure.
The Mongol rule over China (Yuan Dynasty) lasted until 1368; it was a golden period for trade along the land Silk Road; it came to an end when the Ming dynasty replaced the Yuan rulers who retreated to Mongolia. Continuous conflicts between the two dynasties became an obstacle to trade by land, thus increasing the use of the long maritime route from Southern China to India and from there to the Persian Gulf and to the Red Sea.
The Ming built the current Great Wall which was preceded in history by other long lines of fortifications along the northern border of China; while the Ming Wall was mainly made up of bricks, its earlier versions used a combination of raw materials kept together by dried mud; a technique which can still be observed in the walls of Khiva.
China is the most easterly part of Asia. A Kingdome, both great and wealthie: famous also but scarce discovered. Their jealousie and discourtesy to strangers (they suffer any to enter, none to return,) chiefly causes it. (..) They arrogate all sorts of excellencies whether in Art or Science, as peculiar to their Nation. (..) Pequin is not above a hundred miles from that marvellous wall, which Crisnagol, their King built 1000 yeeres ago, to keep out the invading Tartars. A wall 1200 miles long; six fathoms high; twelve yards thick; and such as was seven and twenty yeeres erecting by a continued labour of 750000 men.
Sir Thomas Herbert - Some Yeares Travels Into Divers Parts of Asia and Afrique.. - 1638
Two wars with Britain between 1839 and 1860 forced the Chinese Empire to open its ports foreign merchants and grant favorable trade tariffs. 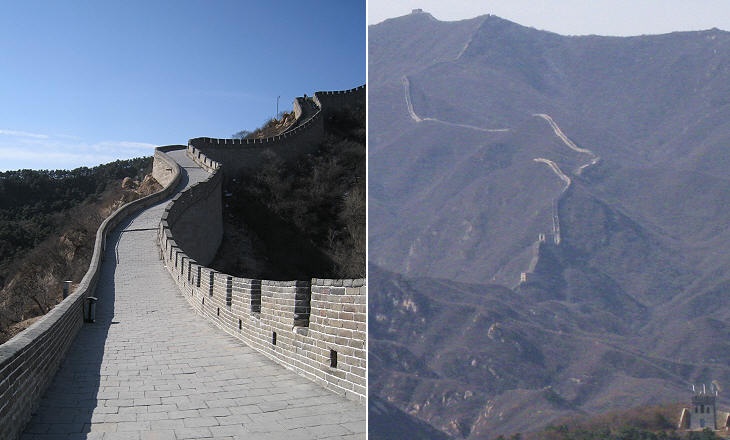 (left) A quiet point; (right) view over a section of the Wall not yet fully restored

On Feb. 12th, 1912, the Imperial House of the Manchu Dynasty ceased to rule over China, which thereupon became a Republic with Yuan Shih-k'ai as temporary President. On April 8th, 1913, the first Parliament was inaugurated, consisting of a Senate (274 members) and a House of Representatives (596 members). Yuan Shih-k'ai was formally elected first President of the Republic on Oct. 6th, 1913.
Karl Baedeker - Handbook for Russia with Teheran, Port Arthur and Peking - 1914

The image used as background for this page shows a detail of the Great Mosque of Xian.