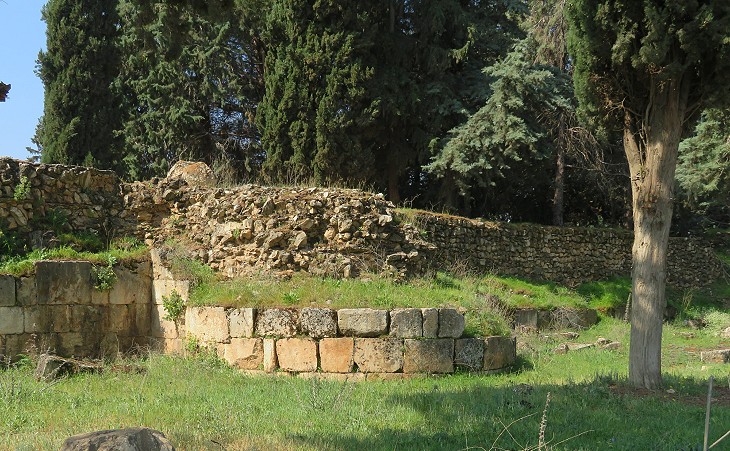 A round tower of the walls

September 24, 1810. Left the village before day light and crossed the Anti Libanus at the foot of which Zebdeni lies. This chain of mountains is by the inhabitants of the Bekaa called Djebel Essharki or the eastern mountain in opposition to Djebel el Gharbi, the western mountain, otherwise called Djebel Libnan (Libanus). (..) I rode to Andjar on the eastern side of the Bekaa in a direction south east by south two hours and a half. (..) The place called Andjar lies near the Anti Libanus and consists of a ruined town wall inclosing an oblong square of half an hour in circumference. The greater part of the wall is in ruins. It was originally about twelve feet thick and constructed with small unhewn stones loosely cemented and covered by larger square stones equally ill cemented.
Johann Ludwig Burckhardt - Travels in Syria and the Holy Land - 1822 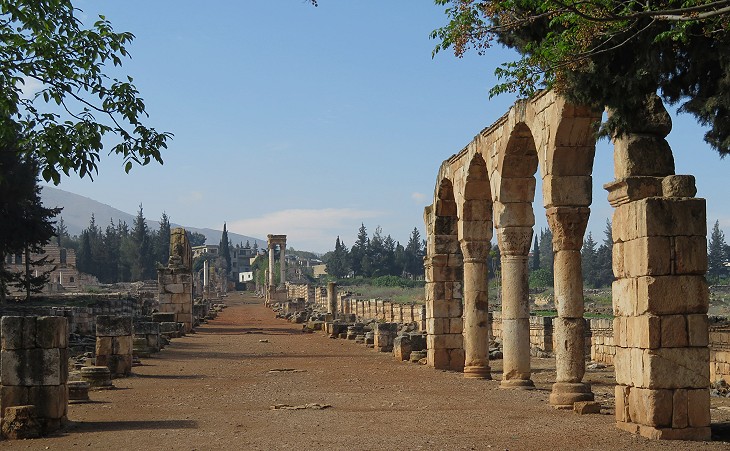 In the enclosed space are the ruins of habitations of which the foundations alone remain. Burckhardt
The city of Anjar was founded by Umayyad Caliph Walid I at the beginning of the VIIIth century. The ruins reveal a very regular layout, reminiscent of the palace-cities of ancient times, and are a unique testimony to city planning under the Umayyads. (..) Anjar is an example of an inland commercial centre, at the crossroads of two important routes: one leading from Beirut to Damascus and the other crossing the Bekaa and leading from Homs (and Aleppo) to Tiberiade. The site of this ancient city was only discovered by archaeologists at the end of the 1940s.
From the UNESCO World Heritage List website. Anjar was included in the list in 1984. 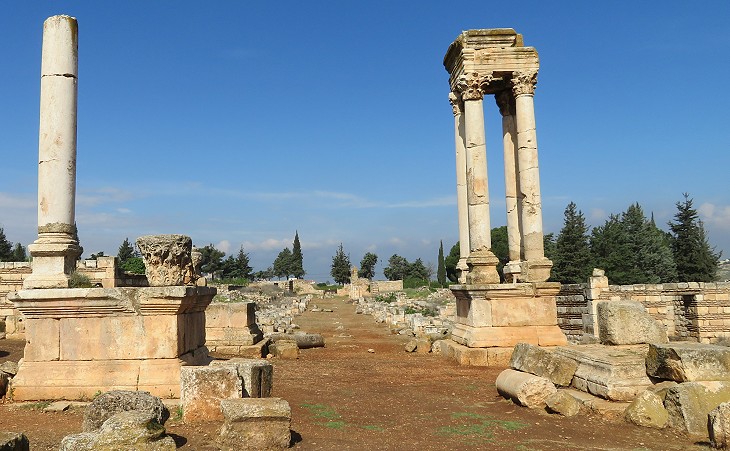 The layout of Anjar resembles that of a Roman town with two main streets crossing at right angles and creating four quadrants of the same size. Because of this similarity, archaeologists identify these streets with the Roman names for them, i.e. decumanus and cardo. The main crossroads is marked by a tetrapylon (four gates) which is almost identical to those at Palmyra and Gerasa (Jerash) which most likely were still standing when Anjar was founded. 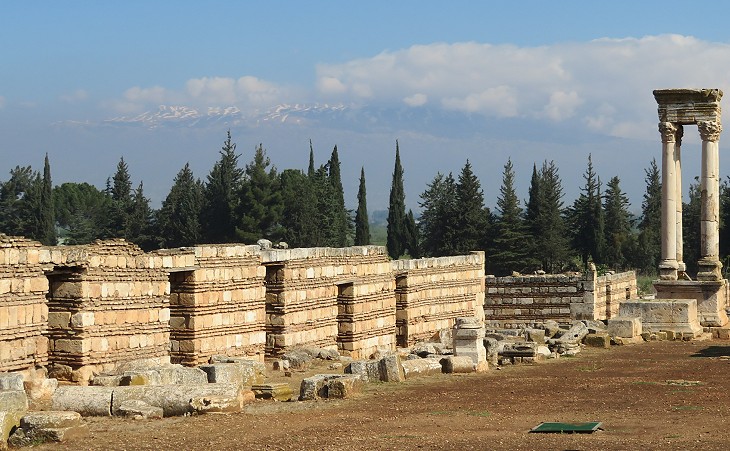 Cardo Maximus divided Anjar into two halves having different characteristics; the eastern one housed a series of palaces and public buildings including a mosque and baths; the western one was reserved to living quarters and barracks. Trading activities were centred along Cardo Maximus where a series of shops have been reconstructed. The monumental part of the eastern half seems to have been completed, whereas the living quarters and the barracks were not fully in place when in 744 the Umayyads began to lose control of the Caliphate and the construction of Anjar was stopped (but perhaps it had already slowed down after the death of Caliph Walid I in 715). 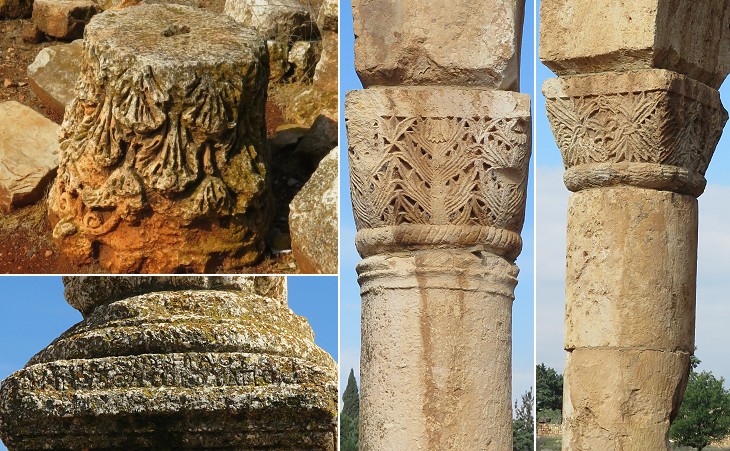 The two main streets of Anjar were embellished with materials taken from ancient monuments in the Bekaa Valley. It was not necessary to go as far as Baalbek to find columns and capitals because other Roman towns and villas were close at hand. The Byzantine capitals came from churches, but some of them might have been made on purpose for Anjar, considering that the Caliph largely relied on Christian architects and craftsmen when he built the Great Mosque of Damascus. 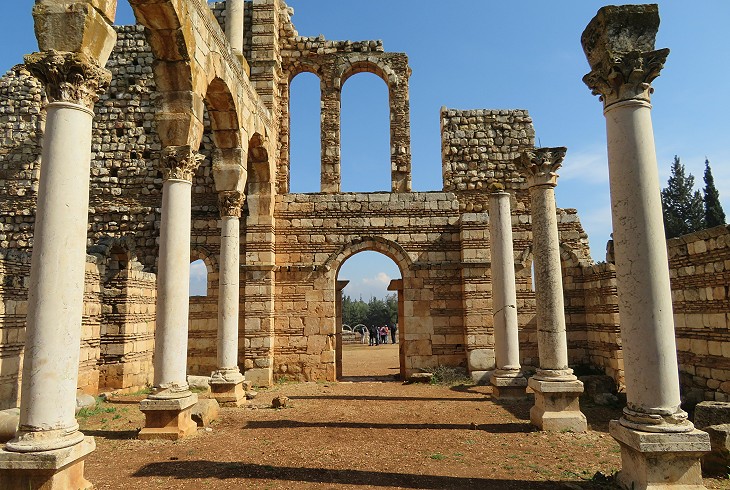 Great Palace, the assumed residence of the Caliph: main hall

In one of these buildings are seen the remains of two columns of white marble one foot and a quarter in diameter. The whole seems to have been constructed in modern times. Burckhardt
Archaeologists have reconstructed a hall of the Great Palace; its walls were built in the typical Byzantine technique of alternating layers of bricks and of stones which is particularly noticeable in the Walls of Constantinople. It eventually became a decorative feature of Islamic art (e.g. at Cordoba and Edirne) and it evolved into the facing of monuments with alternate bands of black and white ashlars (e.g. at Aleppo and Diyarbakir). 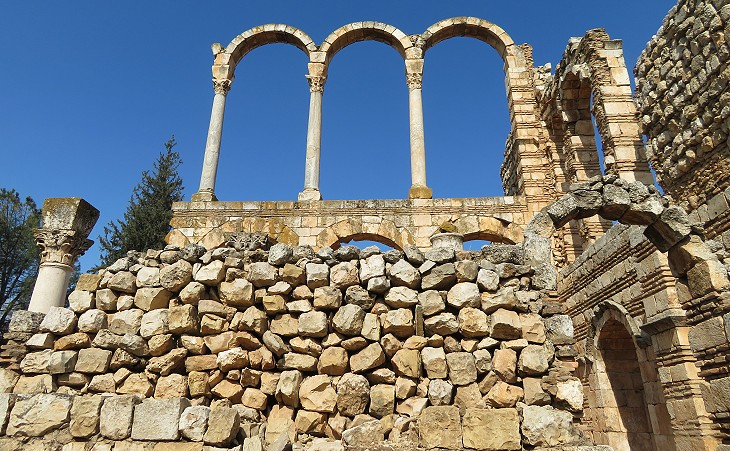 Great Palace: another view of the main hall

The hand of Byzantine architects in the design of the palace is testified to by the placement of a pulvino, a piece in the form of a truncated pyramid, on top of a traditional capital. Another example of Umayyad palace is at Qasr al-Mushatta near Amman. It was built in 744 by Caliph Walid II and, similar to that at Anjar, it was designed in accordance with Byzantine models and using ancient materials. 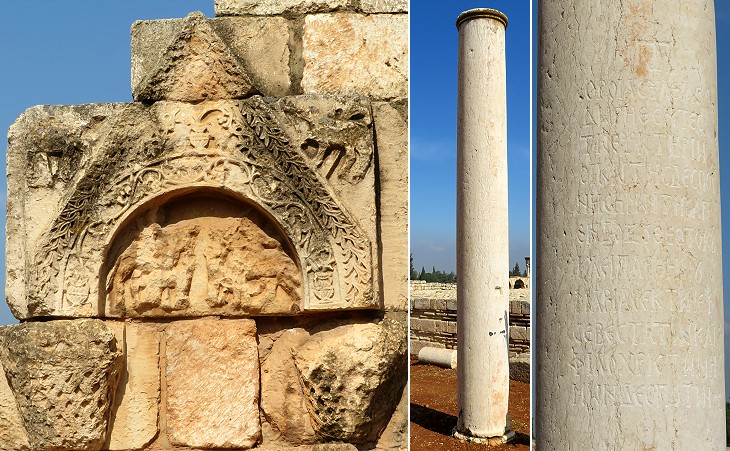 Great Palace: (left) Byzantine relief; (right) ancient column with a cross and a long Greek inscription; the image used as background for this page shows a capital in this palace

Walid I did not engage in deleting all evidence of previous civilizations in his territories. Reliefs with depictions of animals or crosses with Christian inscriptions were not erased from the ancient materials which were used for the Anjar palace. One of his successors built a small residence for his leisure time at Qasr al-Hamra, a remote location in the desert east of Amman, which was decorated with frescoes portraying human beings and animals. 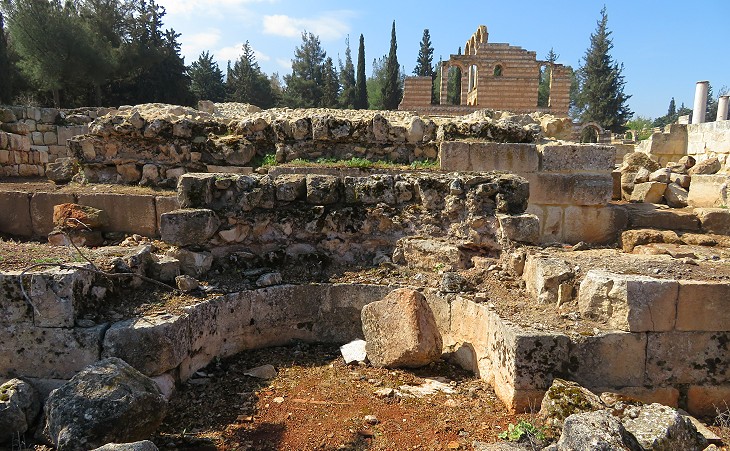 Mihrab of the mosque and the Great Palace in the background

The remains of a mosque stand to the north of the Great Palace; the building had two entrances for the public and another one for those who lived in the palace. We do not know whether Caliph Walid I actually lived at Anjar. His successors built two large palaces which they used as hunting lodges in the desert east of Damascus. The ruins of Qasr al-Hayr al-Sharqi (Eastern Palace) are very impressive and they include a mosque having a layout similar to that of a Roman basilica with three naves. 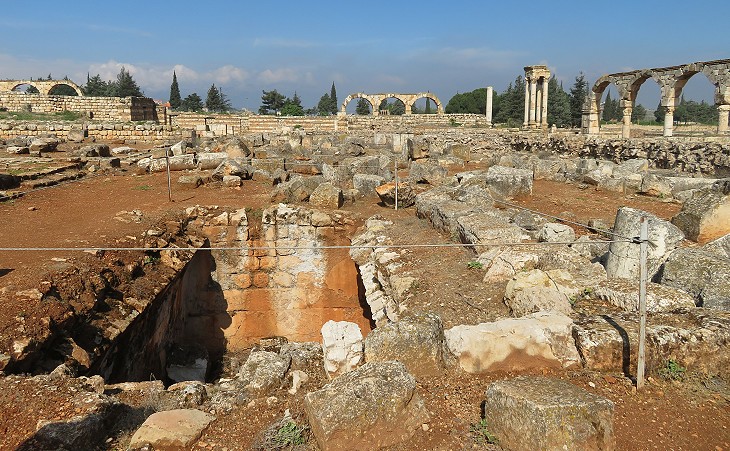 Anjar was equipped with a sewage system and with cisterns and public fountains. The town stands on sloping ground and when archaeologists decided to excavate its northern/lower part they had to drain a swamp and plant eucalyptus and pine trees. This shows that Anjar had plenty of water, at least until the net of canals dug by the Romans to irrigate the valley was properly maintained. 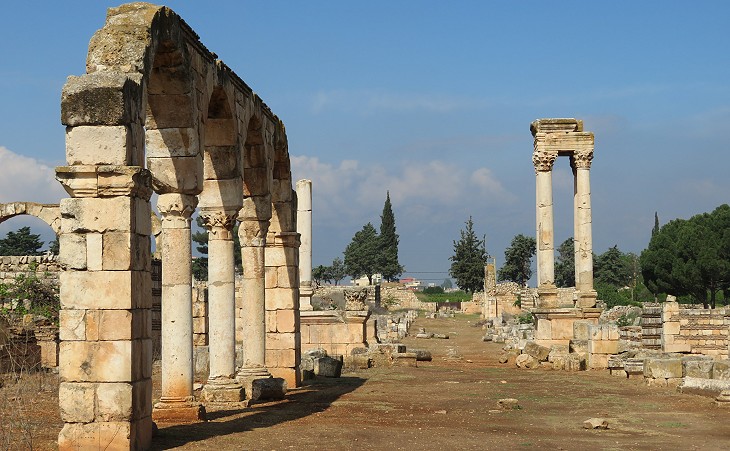 Colonnade along Decumanus Maximus and another view of the Tetrapylon

The Umayyad Caliphate had a size which can be compared to that of the Roman Empire, yet Anjar is a miniature town and its colonnaded streets do not stand comparison with those of Roman towns of the region, e.g. Scythopolis and especially Apamea. 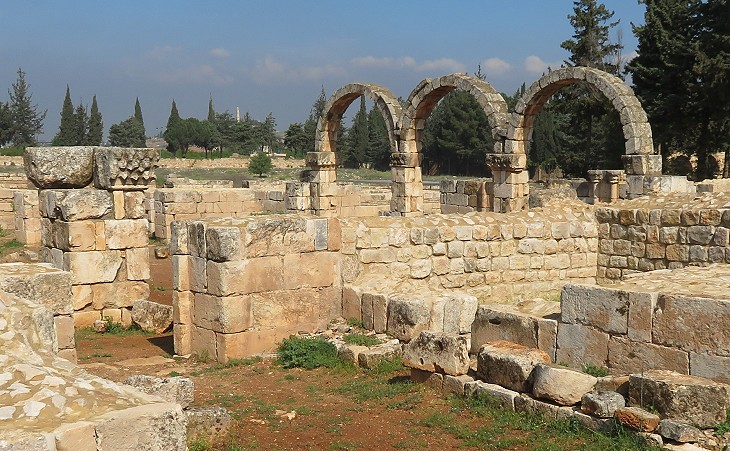 The monumental eastern half of Anjar included a group of small palaces north of Decumanus Maximus. They are assumed to have been the harem of the Caliph. That gives a "One Thousand and One Nights" or an "Ottoman Seraglio" flavour to the visit of the town, but the buildings do not have features which clearly indicate their use. The practice of secluding wives and concubines appears to derive from Sassanid Persia and it was adopted by Muslim rulers during the Abbasid Caliphate which replaced the Umayyad one in 750. It had its capital at Baghdad and it was influenced by Persian customs and culture. 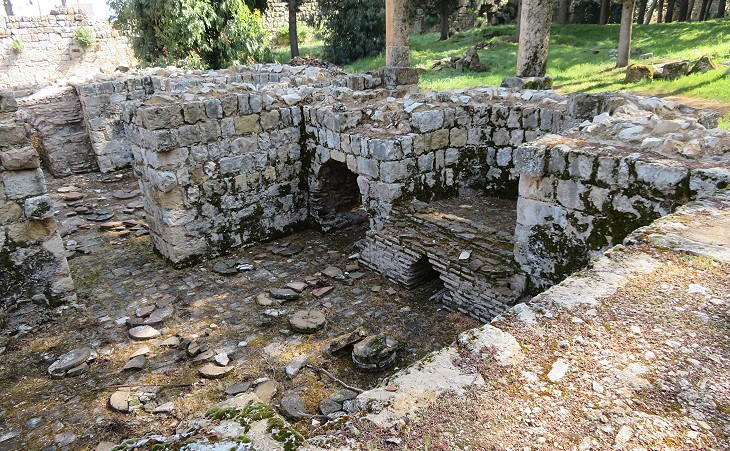 Public Baths near the Northern Gate