Page revised in February 2017. The locations covered in this section were visited in March 2013. 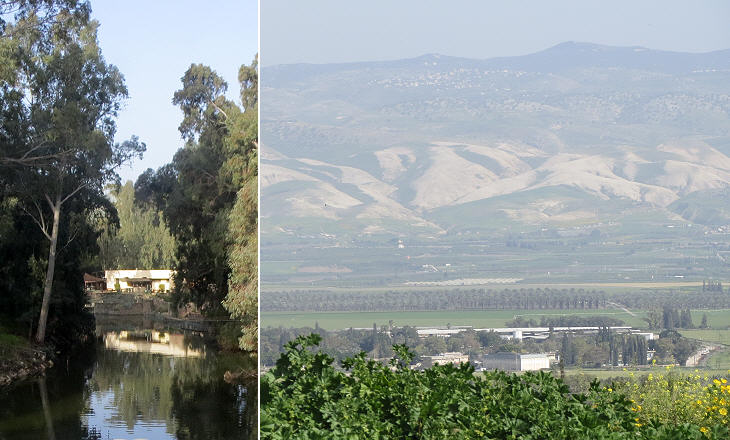 (left) The River Jordan shortly after its exit from the Sea of Galilee: (right) the Jordan Valley seen from modern Bet She'an; Pella, another ancient town was situated on the other side of the valley

Today the River Jordan marks the border between Israel and Jordan from almost its exit from the Sea of Galilee to its emptying into the Dead Sea, apart from a short section when it is entirely within Israel. Historically however the river did not mark a political or ethnic division between the two sides of its valley. In the Ist century BC Scythopolis was not part of the Kingdom of Judea, the territory of which included the Sea of Galilee, but it was politically linked with other Hellenized towns to the east of the river in today's Jordan and Syria. 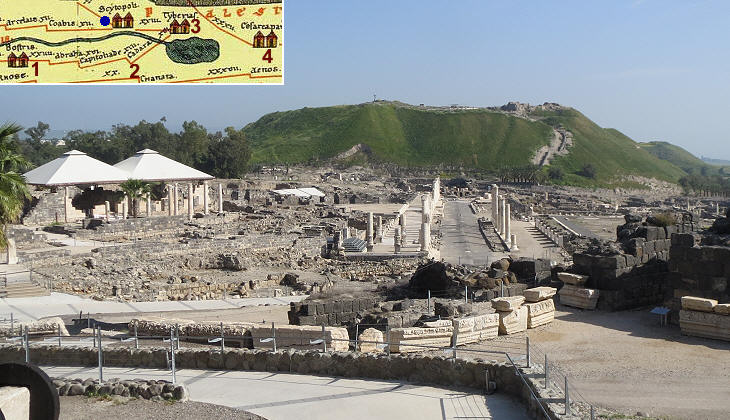 Overall view of the lower town and the acropolis; (upper left corner) section of "Tabula Peutingeriana", a Vth century map of the roads of the Roman Empire showing the Sea of Galilee and the River Jordan: blue dot: Scythopolis; 1) Bosra; 2) Canatha; 3) Tiberias; 4) Caesarea Philippi (or Paneas)

The initial settlement on the acropolis was mainly due to military reasons. The hill controlled a route between the Jezreel Valley (see a page on Megiddo, a fortress in that valley) and that of the Jordan. According to tradition in 1007 BC the bodies of King Saul and of three of his sons were hanged by the Philistines in the main square of the town. 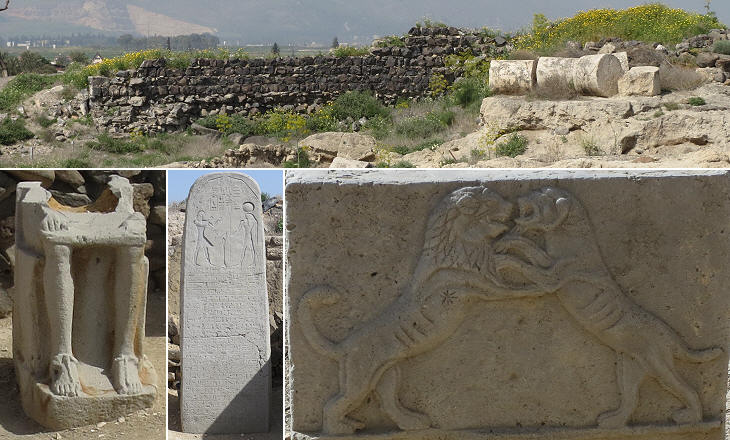 On the acropolis: (above) site of a Roman temple; (below-left/centre) Egyptian statue and stela; (below-right) Assyrian relief

Control of the acropolis was sought by the great powers of the region as well as being fought over by the local nations. Archaeologists have found evidence that it was an Egyptian stronghold between the XVth and the XIIth centuries BC, when a governor resided there. In the VIIIth century BC it was conquered by the Assyrians, but this conquest led to the decline of the town. 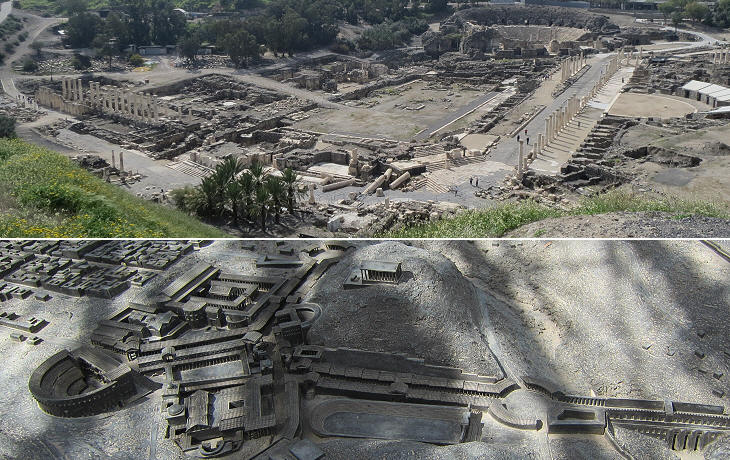 (above) The lower town seen from the acropolis: the image shows two of the main colonnaded streets of the town (Silvanus Street-left and Palladius Street-right) and some monuments at their junction: the streets and the monuments are covered in more detail in page two; (below) model of the town showing "Valley Street", another colonnaded street at the foot of the acropolis which led to a bridge

With the exception of some findings on the acropolis the monuments of Scythopolis were built after the town was re-founded by the Romans (Pompey conquered the region in 63 BC). At that time the site was known as Scythopolis, Scythia being the name the Greeks gave to the land on the northern coast of the Black Sea, roughly corresponding to today's Ukraine. Probably either Alexander the Great or one of his generals (and successors) hired Scythian mercenaries, to whom the town and the nearby land were assigned. This Hellenistic town was almost entirely destroyed by a fire towards the end of the IInd century BC. 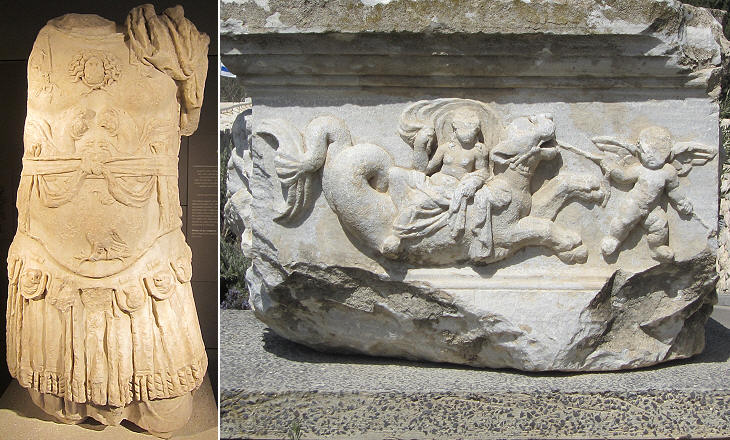 Museum of Israel: statue of an emperor (left) and relief (right) found at Scythopolis

The Roman reconstruction shifted the centre of the town from the acropolis to the area at its foot. Scythopolis became one of the ten city-states known as Decapolis (Ten Towns) which included Damascus and Canatha in today's Syria. Scythopolis was the only town to the west of the Jordan. These towns were allowed a degree of self-government and their development was favoured by the Romans. The calendar they adopted counted the years from Pompey's "liberation" of the region (you may wish to see an inscription at Caesarea Philippi). 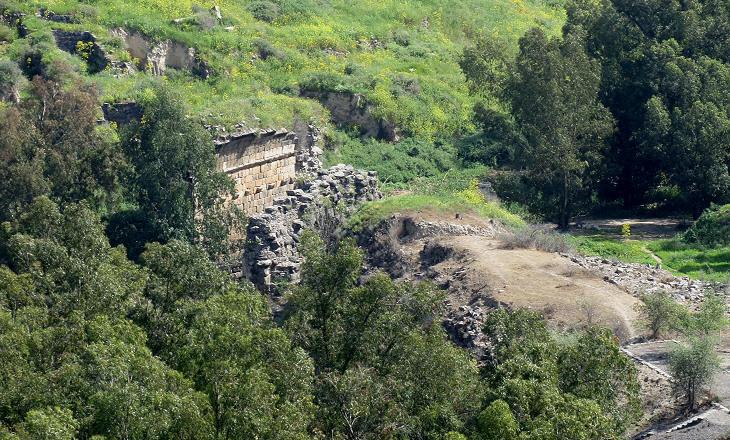 Roman Bridge seen from the acropolis

The Decapolis did not represent an alliance which supported the Romans from a military viewpoint, but it played a role in the overall policy pursued by the Romans to consolidate their presence in the region. They promoted farming to restrict the field of action of the nomadic tribes of the desert areas between the Jordan and Mesopotamia. These tribes were possible allies of the Parthians, the great enemies of the Romans in the East.
Farming made the Decapolis towns wealthy because the crops could be sold to the large cities of the Empire and because the Romans introduced advanced construction techniques and irrigation systems. 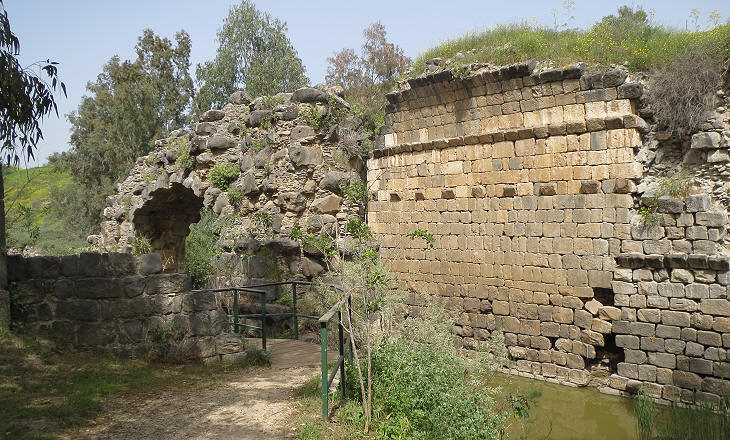 The wealth achieved by Scythopolis was such that its magistrates could embark on building facilities which were not entirely required, but which were a means to show the importance of the town. An imposing bridge was built on a small stream which could have been crossed by a much smaller one. An arch at the end of the bridge marked the beginning of a long colonnaded street which led to the centre of the town. 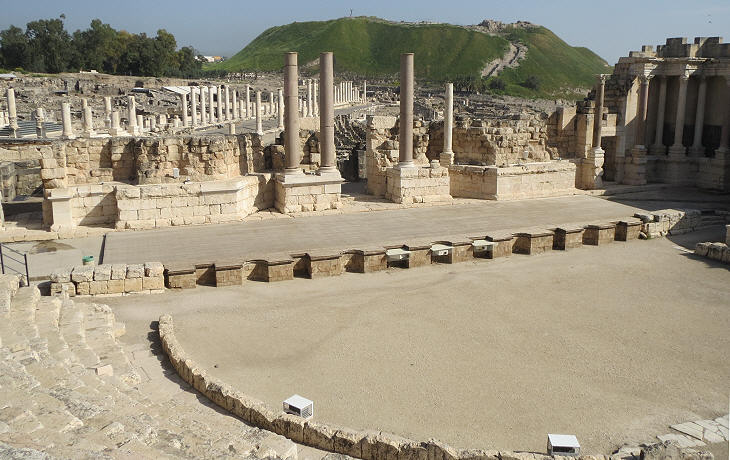 Theatre: the stage and the "proscenium"

Theatres are very often the most impressive buildings of ancient towns; unfortunately many of them have been destroyed in recent years by silly reconstructions. For the time being that of Scythopolis has escaped this fate, but seeing what has occurred at Caesarea, on Cyprus (at Kourion and Salamis) and elsewhere, there is still the risk of seeing the old stones replaced by modern concrete. 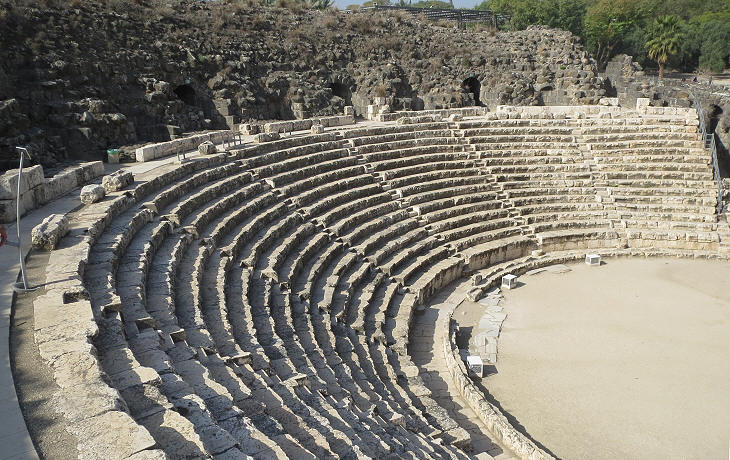 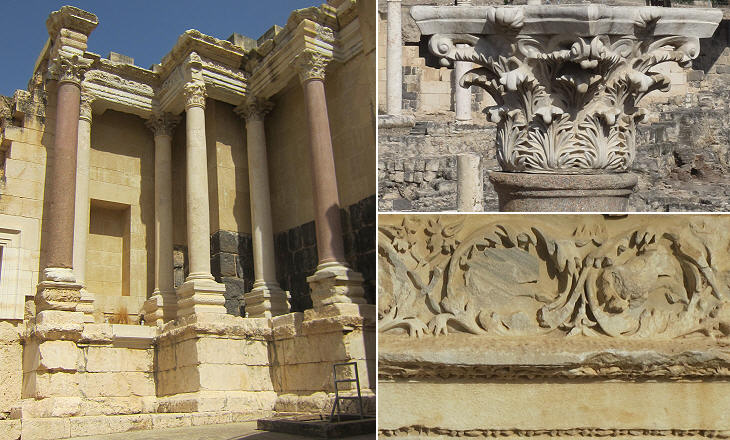 Theatre: (left) detail of the "proscenium"; (right-above) a capital; (right-below) relief where animals or human beings have been erased

The theatre was built in the Ist century AD, but it was renovated in the IInd century when granite columns from Egypt were used to make the proscenium, the decorated high wall which stood behind the stage more impressive. The theatre was decorated with reliefs which probably came from other towns of the Empire such as Afrodisias in Turkey. The image used as the icon for this section shows a relief which decorated the theatre. 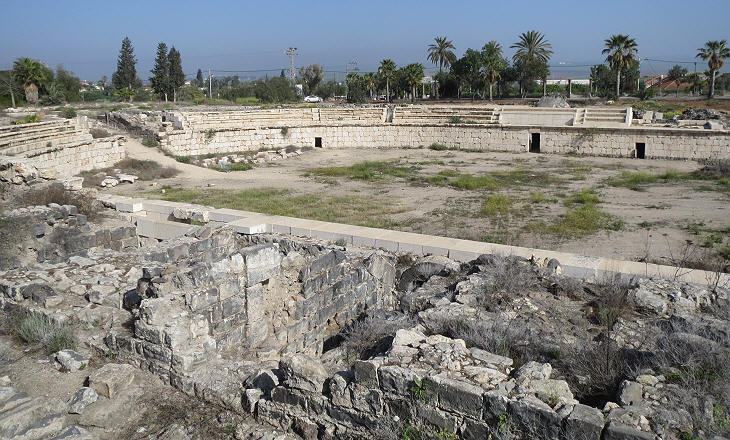 The theatre was not the only large entertainment facility of Scythopolis; a circus for chariot races was built in the IInd century AD at some distance from the town; perhaps it replaced a smaller facility in a more central location which had been dismantled to make room for more houses (the model shows a hippodrome or a stadium adjoining "Valley Street", but there is not much evidence of it on the field). In the IVth century it was modified and turned into an amphitheatre for performances involving wild or trained animals. 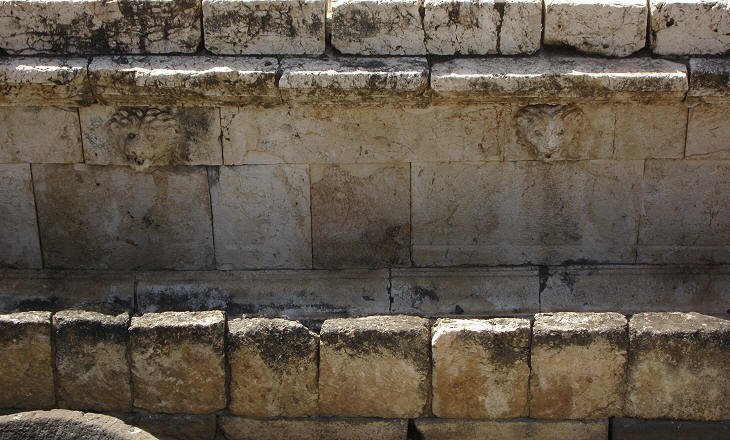 Fountain of the sacred compound

Most of the towns of the Western Roman Empire declined in the early Vth century, but those in the Eastern Empire continued to flourish until the middle of the VIth century when a major plague reduced the population and depressed the economy. For this reason Scythopolis has many buildings of the period when the inhabitants of the town were Christians and archaeologists have not found much evidence of pagan temples. A sacred compound has been identified near the theatre at a lower level than the latter; it included a public fountain with spouts finely depicting lion heads. You can see another of them in the image used as background for this page. 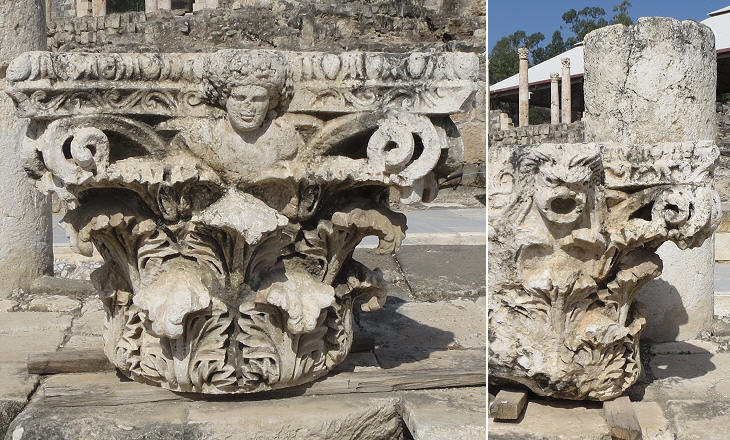 Long colonnaded streets characterized the richest Roman towns. Scythopolis could not compete with those of Apamea and Palmyra as far as length is concerned, but it had three (or four) of them which converged at the foot of the acropolis. Although they were restored taking away pagan symbols, archaeologists have found a capital portraying Dionysus, a god who was highly popular in the Hellenized world. According to tradition the acropolis was the tomb of Nysa, a nymph who tended the infant god in a cave and fed him on honey. 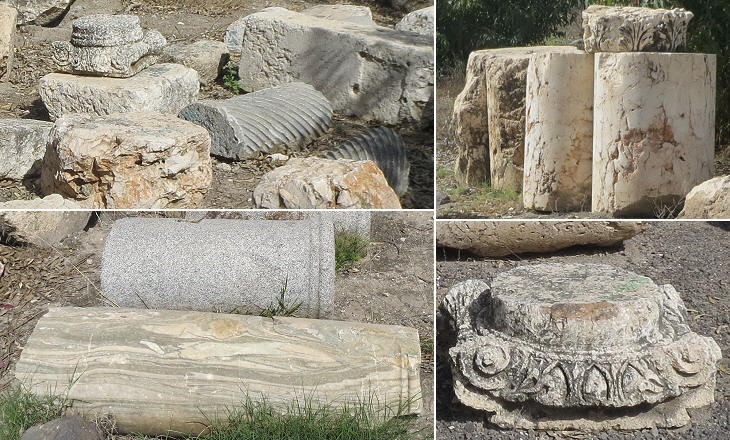 Quanta Roma fuit, ipsa ruina docet (the ruins of Rome spell its past greatness), a saying attributed to a XIIth century French bishop, applies to Scythopolis too. Although many columns and capitals have been used to partially reconstruct the monuments of the town and chiefly its colonnaded streets, a large quantity of decorated material lies on the ground. 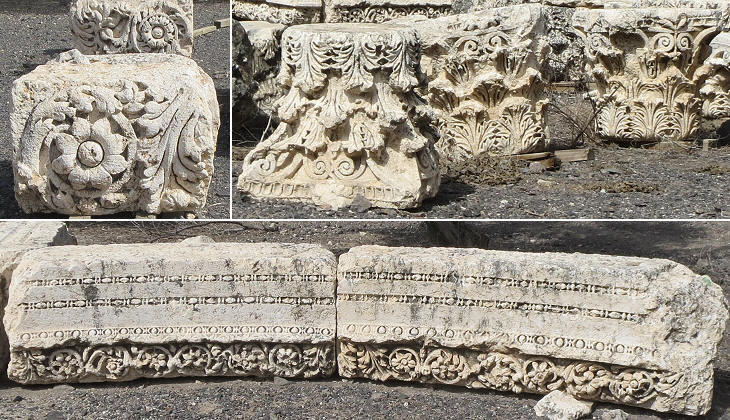