You may wish to read a page on the Roman town first. 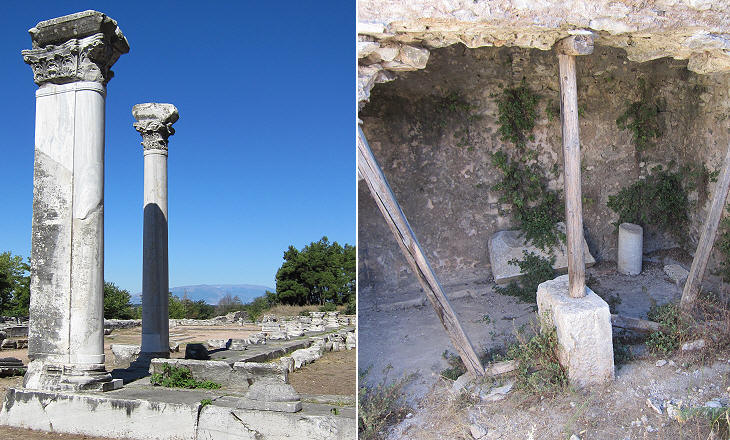 Belon saw its ruins in the sixteenth century, and spent two days in their examination. (..) He considered the ruins of no other city equally calculated to excite admiration. The abundance and beauty of its marble is explained by the circumstance of a vein of that substance being observed by Belon within the walls of the city: but independently of the high estimation in which every literary traveller will hold its classical antiquities, its celebrity as the scene of St Paul's imprisonment with Silas, and the circumstance of that apostle having addressed one of his Epistles to its inhabitants, will cause Philippi to be regarded with no common sensations of interest and curiosity.
Edward Daniel Clarke - Travels in various countries of Europe, Asia and Africa in 1799-1804
French naturalist and diplomat Pierre Belon (1517-1564) visited the site between 1546 and 1549 and he was the first to describe the ruins of Philippi in Les observations de plusieurs singularitez et choses mémorables, trouvées en Grèce, Asie, Judée, Egypte, Arabie et autres pays estranges: rédigés en trois livres - ca 1560. Later travellers often reported his accounts without bothering to actually visit the site. 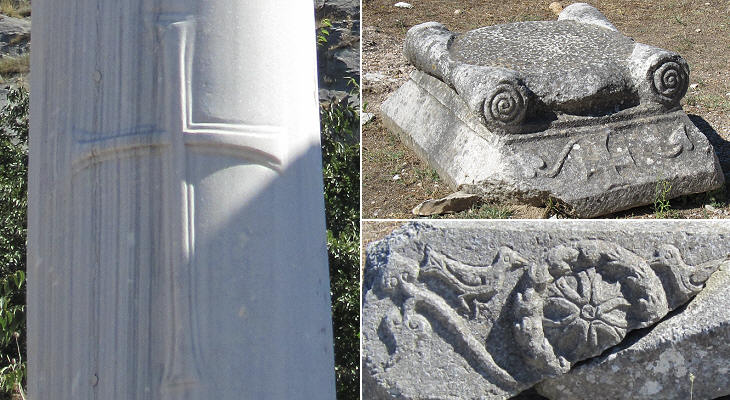 Northern Basilica: (left) a column; (right-above) a capital with a "pulvinus"; (right-below) a decorative relief

Philippi remained a prosperous town after its direct links with Rome lost importance; pilgrims visited it to see the supposed cell where for one night St. Paul was imprisoned during one of his missionary journeys through the Jewish communities of Macedonia (see modern mosaics celebrating his travels at Kavala and Veria).
In the Vth century a large three-aisled basilica was built near the site of the cell, which archaeologists believe was in fact a cistern. The decoration of this basilica was based on Christian symbols, but its layout was consistent with traditional Roman patterns. A typical feature of Byzantine architecture was introduced by adding a pulvinus, a piece in the form of a truncated pyramid and bearing a cross, to the traditional capitals, similar to what can be noticed in churches at Constantinople and Ravenna. 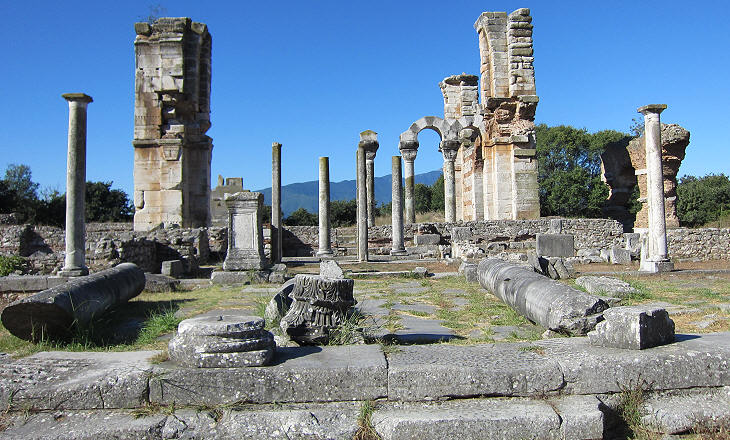 Basilica of the Pillars

Belon mentions, moreover, the colossal remains of a Temple of Claudius besides inscriptions, and numberless statues; and enormous marble columns, beautifully sculptured, and in a marvellous style of structure. Clarke
The site was almost in the same state when in 1861 Léon Heuzey undertook the first archaeological excavations (he worked also at Dion). In the VIth century the inhabitants of Philippi embarked on the construction of an imposing basilica on the site of the town's palaestra; the size of the planned building clearly exceeded the needs of the town, thus indicating that Philippi attracted many pilgrims. 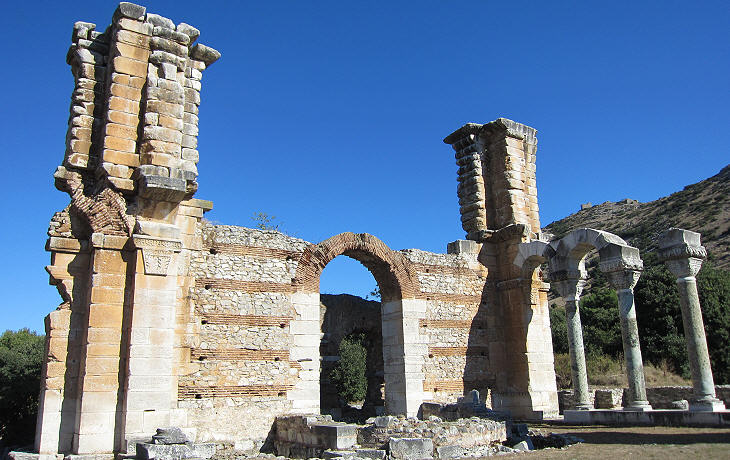 Basilica of the Pillars: side entrance

There is uncertainty among archaeologists whether the gigantic pillars of the basilica ever supported a dome; in 547 the so-called Justinian plague devastated the countries of the Mediterranean basin and in the early VIIth century an earthquake struck the region of Philippi; these two catastrophic events could have halted the completion of the basilica. 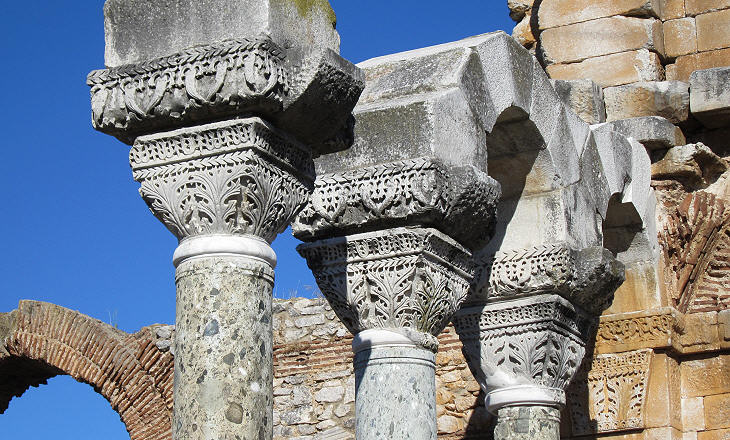 Basilica of the Pillars: detail of the capitals (also in the image used as background for this page)

Having got this new feature (the pulvinus), based absolutely on utility, they set to work like true artists to decorate it. Preserving the solid geometrical outline on which its usefulness depends they carved its surface with leaves, and enriched it with sacred monograms in a circle on the front, (..) or merely with a simple cross. The capitals themselves, when new ones were worked, for the use of old ones was more common in the West than in the East, underwent a great change in the direction of solidity. The influence of classic models was not lost, and though the delicate undercutting and modelling of the Corinthian capital was abandoned, (..) the acanthus leaf was employed for the foliage, generally arranged alternately in two tiers, but sometimes twisted as if blown by the wind in a very curious fashion. (..) The Byzantine leaf (..) was treated as a flat surface (..) and by sharply cut perforations and a plentiful use of the drill. The result is curiously precious and delicate.
Thomas Graham Jackson - Byzantine and Romanesque Architecture - 1913
The decoration of the basilica moved away from classic patterns; all representations of human beings and animals were banished and even the acanthus leaves of Corinthian capitals were depicted in an almost symbolic way; this type of "combed" capitals can be observed also at former Byzantine buildings in Syria and Lebanon. 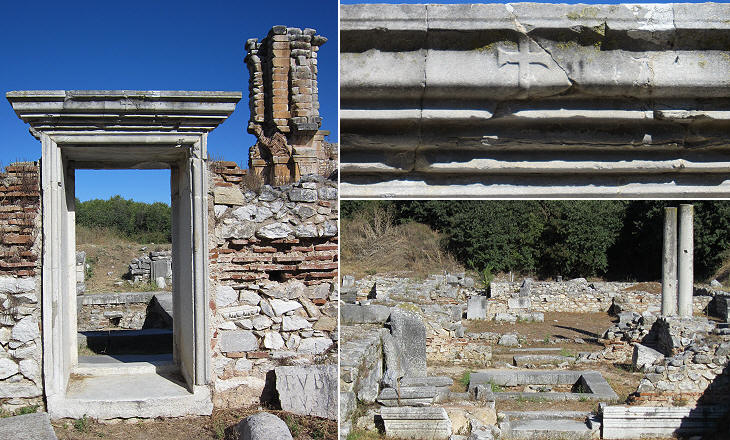 Basilica of the Pillars: (left) entrance to a side chapel; (right-above) cross on the lintel; (right-below) baptistery

The basilica was at the centre of a complex of buildings which included a chapel reserved to the bishop and a baptistery; the whole complex was built with materials taken from ancient monuments, but the stones were completely reworked in order to eliminate all references to gods, human beings and animals. 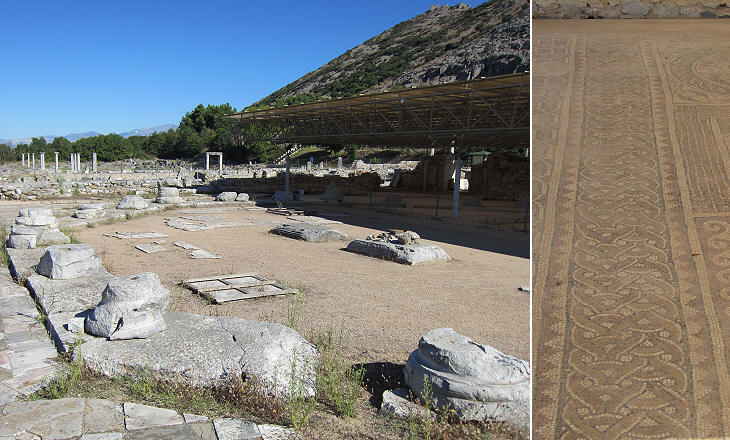 Octagonal Basilica and mosaic of its northern section

In recent years a third large basilica was identified to the east of the Forum, in what seems to have been a residential quarter; it has an unusual octagonal shape, which could indicate that it was built on the site of a mausoleum; it was decorated with an elaborate mosaic. Archaeological studies may lead to more complete understanding of the purpose of this complex which, in addition to the octagonal church, included several other buildings.

Philippi declined after the VIIth century earthquake, but records of its existence indicate that the town was populated until the XIVth century, at least in the form of a village.

Return to page one (Roman Philippi) or move to:
Kavala, the ancient Neapolis, the port of Philippi
Thessalonica
Veria
Kastoria