- Diyarbakir - Other Monuments
(Detail of a relief at Karatepe)

You may wish to see an introductory page to this section with a map first. The walls and gates of the town, together with its Ulu Cami (Great Mosque) are the main attractions of Diyarbakir. There are however other interesting monuments belonging to different periods and styles; they usually share the characteristic of being built with black basalt stones which are decorated with white inlays. 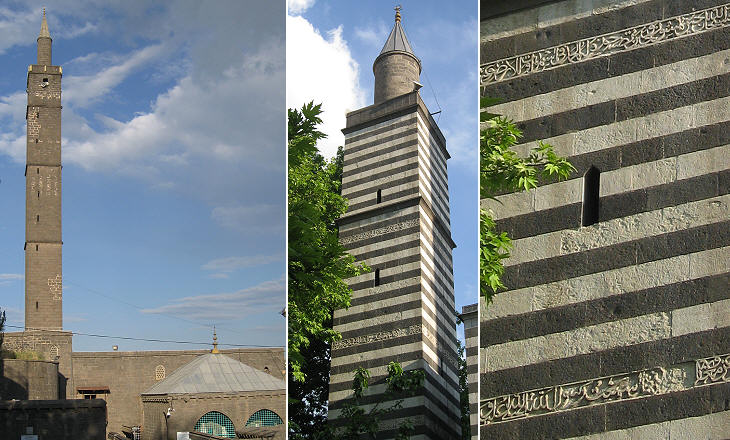 Even a hasty survey of Diyarbekr was sufficient to convince me that the treasures which it contains are still unexplored. Of its many mosques only the Ulu Jami' has been so much as photographed, though the square minarets scattered over the town are probably an indication of an early date.
Gertrude Lowthian Bell - Amurath to Amurath - 1911
Hazreti Suleyman Camii, also known as Kale Camii (Mosque of the Citadel), was built between 1155 and 1169. Its very tall minaret is square and without balconies; the short spire is a later addition. The muezzins called to prayer from its windows. It does not have any white decoration; it is possible that at the time of its construction the white stone from the region of Urfa was not available (see also the minarets of Silvan).
The use of square minarets ended when Diyarbakir was annexed to the Ottoman Empire in 1515, but not immediately because the 1530 minaret of Nebi Camii followed the local traditional pattern (but not entirely because it does not have windows). It is interesting to note that the cost for its construction was borne by a butcher named Haci Huseyin; the fact that he made so much money raises doubts on his weighing practices. The many references to Muhammad in the inscriptions on the minaret have given the mosque a second name Peygamber Camii, the Prophet's Mosque. 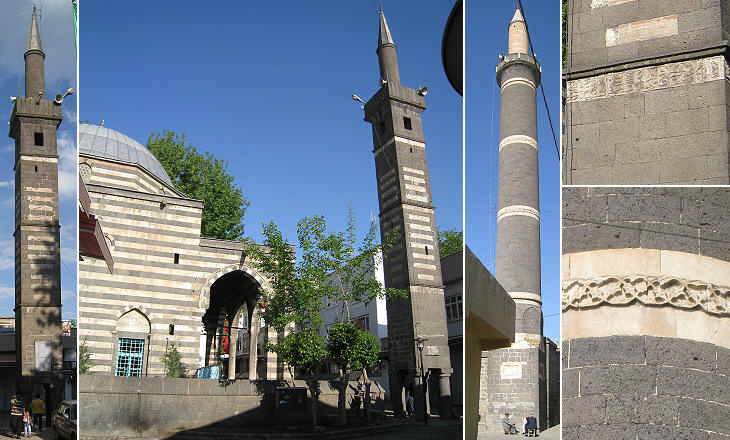 Dort Ayakli Minare is another interesting example of the square minaret without balconies; it is supported by four columns which are thought to represent the four main Sunni madhab (schools of jurisprudence) supporting the true knowledge of Islam. The use of black minarets with white inlays continued through the Ottoman period as shown by the 1728 minaret of Husrev Pacha Camii. 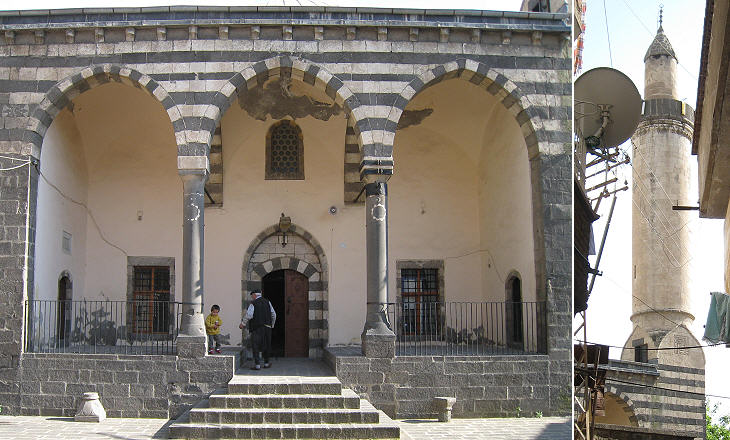 This mosque is thought to have been built in the XVth century; the minaret is a later addition. The striped design of its portico would be evocative of Italian churches were it not for the use of black columns. 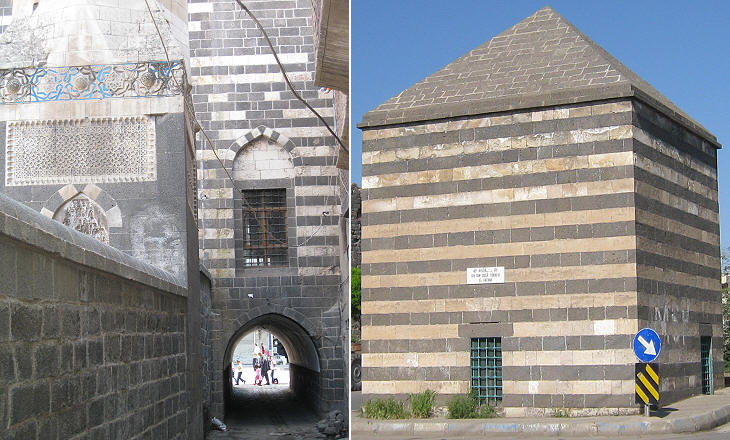 Blue ceramics and pyramidal roofs are typical of Seljuk architecture; in particular the former decorate many monuments of Sivas and the latter can be seen at Kayseri. Their presence in Diyarbakir is evidence of some cultural exchanges between Upper Mesopotamia and the Anatolian tableland.
The image used as background for this page is based on the minaret decoration. 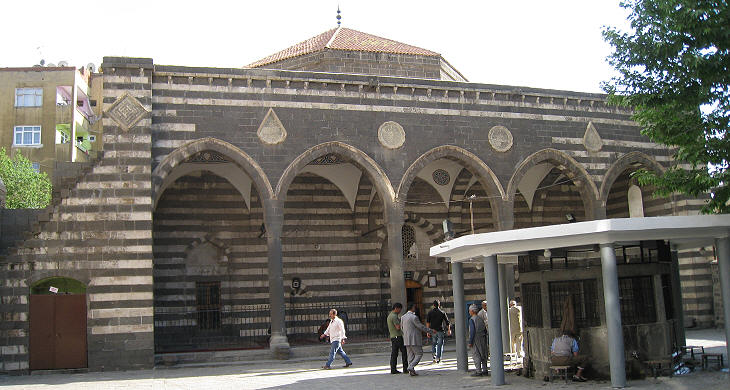 The design of the portico of Safa Camii is similar to that of Lala Kasim Bey Camii, but its decoration is richer; the main prayer hall of Safa Camii is not covered by a dome, but by a pyramidal roof, as in all the mosques built prior to the Ottoman annexation of the region. 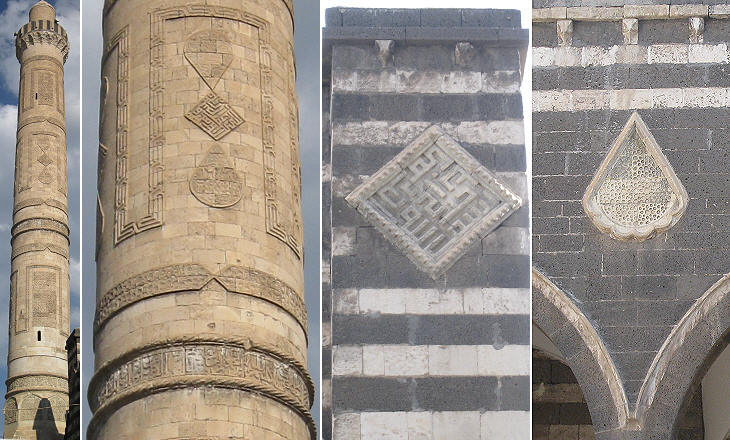 The minaret which stands to the right of the mosque belongs to the XVIth century, a period of transition as it marks the use of white ashlar and its decoration is not based on the contrast between black and white; also the design of the decoration is more varied with many inscriptions which to a western eye have the appearance of a maze; they can also be found at Chakhrisabz in Central Asia. 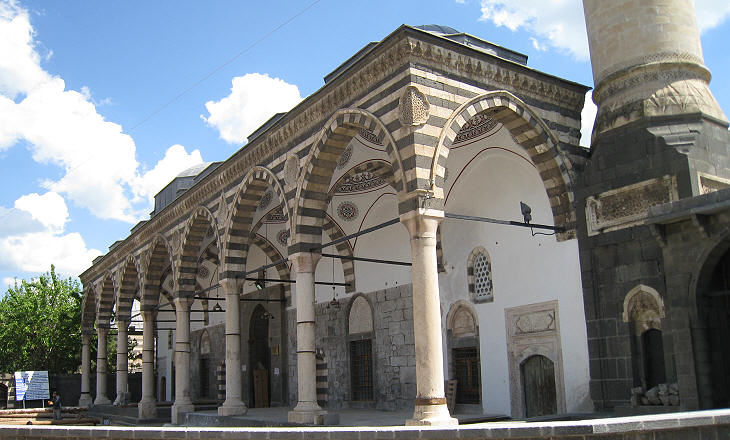 Diyarbakir and its region were not "conquered" by Sultan Selim I in 1515; it is probably more correct to say that they surrendered to him. The local rulers, known as Ak Koyunlu (White Sheep), after having experienced the superior strength of the Ottoman army at the battle of Otluk Beli in 1473, chose to acknowledge the sovereignty of Sultan Selim. They did so after having seen that the Persian Safavids also had been defeated by the Ottomans. Another reason for this decision resided in a religious affinity: Ak Koyunlu and Ottomans were Sunnis whereas the Persians were Shias.
This historical background may explain why the Ottomans built so many mosques and other facilities during the first years of their rule as if they wanted to reward the inhabitants of Diyarbakir for their behaviour. 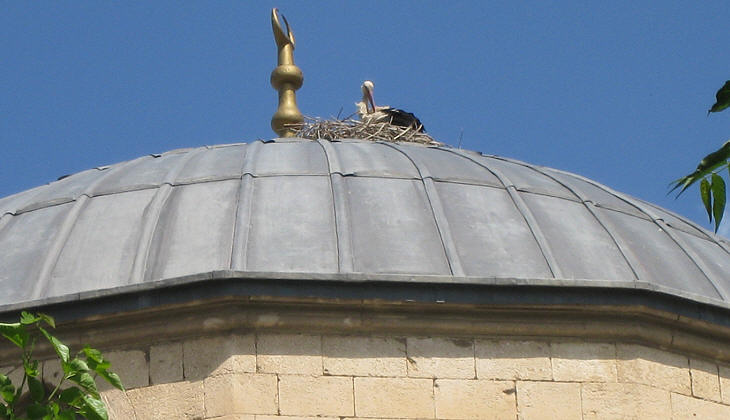 Fatih (Victorious) Pacha Camii was built between 1516 and 1520 by Biyikli Mehmet Pacha, the commander of the Ottoman army who conquered the region of Diyarbakir and who was the town's first governor.
In Turkey it is not unusual to find storks on historical monuments; these birds find themselves at home on the columns of ancient temples (at Ankara and Silifke), on the pointed roof of a kumbet (at Karaman) or on the sloping dome of a mosque. 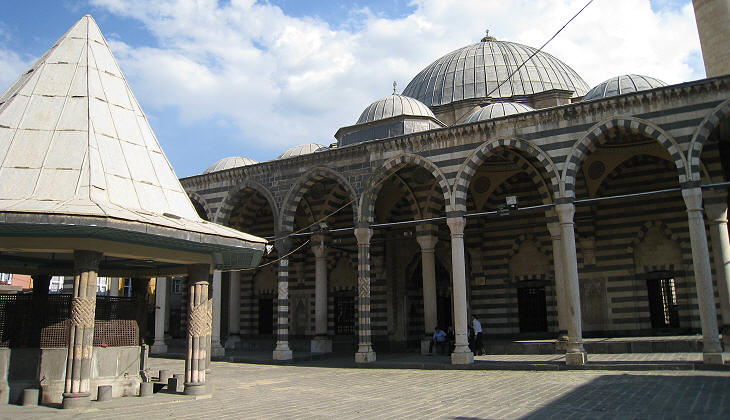 Behram Pacha Camii is a very large mosque built in 1572 by the Ottoman governor of Diyarbakir. Because of its double portico and its overall design, it is attributed to the great architect Mimar Sinan, although its name is not recorded in the official list of works by Sinan. 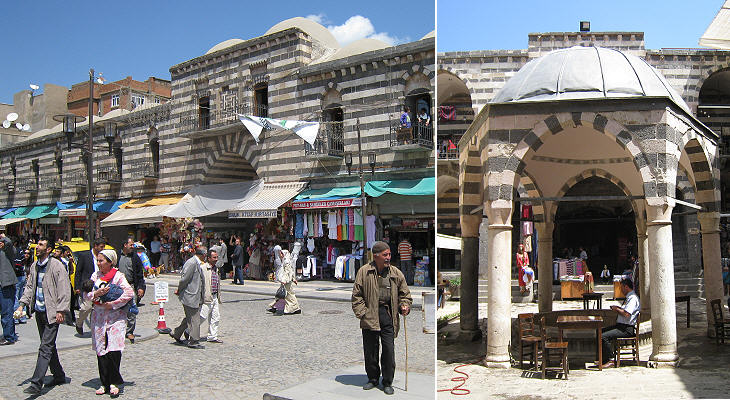 In 1534 the Ottomans conquered Baghdad and Central and Lower Mesopotamia: Diyarbakir became an important step along the route which linked these new provinces to Constantinople; Hasan Pacha, the third Ottoman governor of the town, built a large han in the very centre of Diyarbakir. The building blends Ottoman design with the traditional use of black and white stones. It must be noted that white prevails over black, unlike buildings of earlier periods.

Hasan Pasa Han: detail of the decoration and central inscription

Once or twice as I walked in the bazaars I looked through gateways into the courts of splendid khans, where the walls were decorated with contrasted patterns in limestone and basalt, and stripes of black and white masonry are used in many of the houses and mosques. The final history of Amida must wait upon a much more careful investigation of the town than any which has yet been undertaken. Bell
The balcony above the entrance is decorated with an elegant maze-like inscription; inscriptions of this type are difficult to read because their starting point is not immediately evident; however they usually contain standard sentences such as "God is beautiful and he loves beauty", so it is sufficient to understand one or two words to guess the whole sentence. 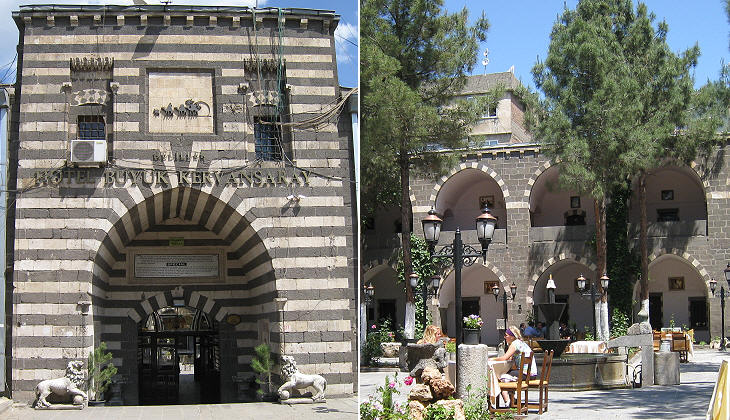 This han is now usually called Buyuk (great/large), but its historical name is Husrev Pacha Han after the Ottoman governor who built it in 1521-1527. It is located near Mardin Gate, the southern gate of Diyarbakir: it was mainly used by pilgrims who were travelling to Mecca and Medina. The han was also called Deliller Han, delil being the word for a guide on the pilgrimage to Mecca.
The han is currently a hotel; there must be a hidden marketing rationale behind the placement of two such incongruous lions at its entrance. 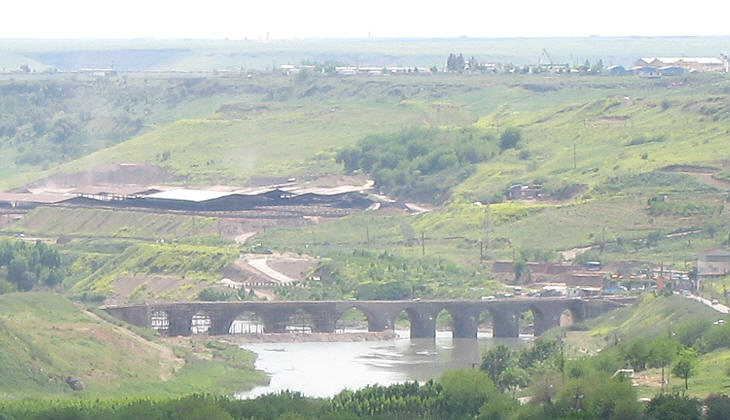 This old bridge which crosses the Tigris two miles south of Diyarbakir is best seen from Keci Burcu, a bastion of the city walls. It is named after its ten arches. It was built in the XIth century and it replaced an earlier bridge. It was restored several times in the following centuries and more recently the two side approaches to the bridge were modified to adapt them to modern traffic needs. 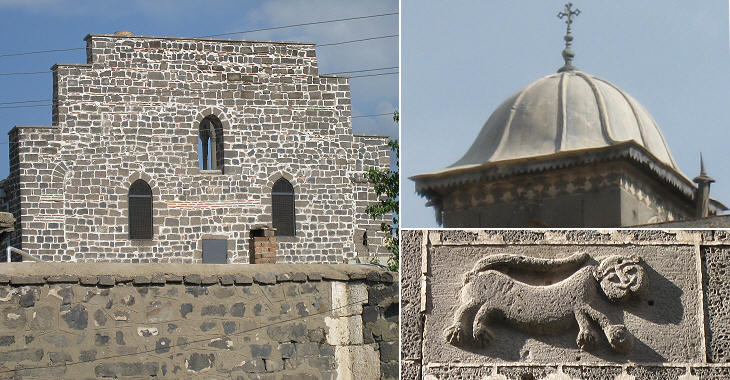 Meryem Ana Kilisesi: (left) upper part of the façade; (right - above) bell tower; (right - below) relief on the left side of the portal

The Church of the Virgin Mary (Meryem Ana Kilisesi) is a very old church, the origins of which can be traced back to the IIIrd century. The current set of buildings is the result of later modifications, mainly made during the XIXth century. It belongs to the Syrian Orthodox Church which is led by the Syriac Orthodox Patriarch of Antioch, whose residence however has not been in that city since 518; for many centuries he resided in a monastery near Mardin, not far from Diyarbakir. The Syrian Orthodox Church is neither part of the Roman Catholic Church nor of the Greek Orthodox Church. 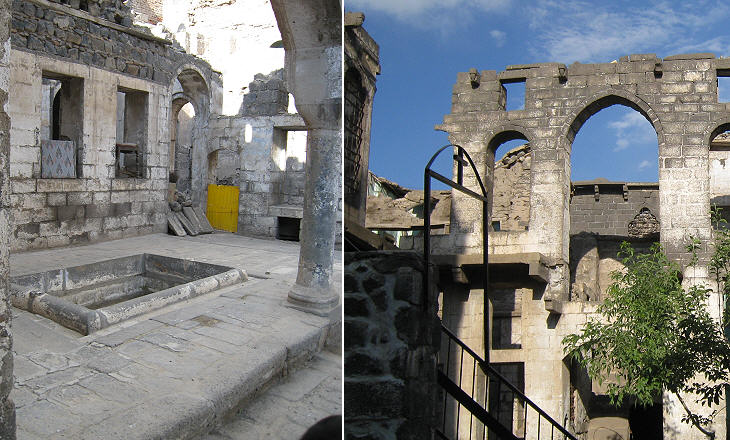 The Capuchins have a small convent at Diarbeck; there are a great number of Armenians in that town, who call the place Keramit. (..) All the Christians are Armenians; the architecture of their churches is very particular,- they have oblong square windows, and over them square windows; the former are only open in the summer for coolness, and in winter filled up with hewn stone fitted to them, and I saw some of them open and others shut up.
Richard Pococke - A Description of the East and Some Other Countries - 1745
Warring faiths struggle together as fiercely as rival empires, and the conflict is embittered by race hatreds. The heavy air, lying stagnant between the high walls, is charged with memories of the massacres of 1895, and when I was in Diyarbekr the news from Cilicia had rekindled animosity and fear. Moslem and Christian were equally persuaded that the other was watching for an opportunity to spring at his throat. Tales of fresh outbreaks in different parts of the empire were constantly circulated in the bazaars, and the men who listened went home and fingered at their rifles. If there had been any sign of further disturbance at Constantinople, Diyarbekr would have run with blood. Bell
Diyarbakir had a large Armenian community until the end of the XIXth century: it can be estimated at approximately 20% of total population. A church dedicated to St. Cyriacus was built in 1515-1518 in a central location of the town; as this happened immediately after the annexation of Diyarbakir to the Ottoman Empire, it is possible that the community was given more freedom by the new rulers. The old church burnt in 1880 and in 1883 it was replaced by a large Gothic cathedral with an imposing bell tower; the latter was pulled down during WWI, whereas the former is now a ruin. 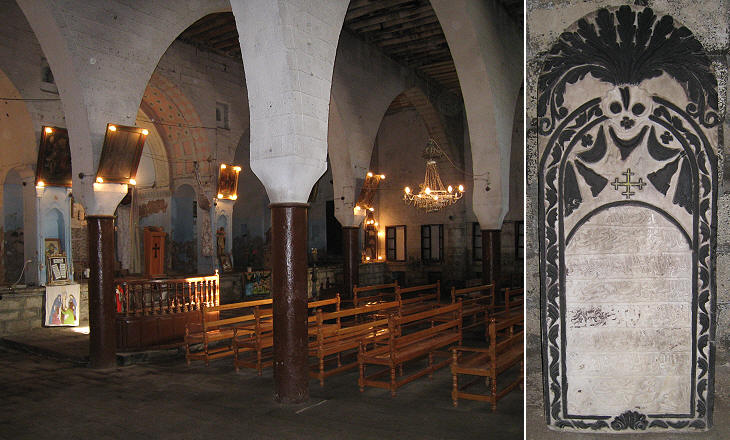 Chaldea is the Greek name for southern Mesopotamia and Chaldean Christian communities lived as a minority group also in Upper Mesopotamia; their church entered into full communion with the Roman Catholic Church in the XIXth century. The bare interior of the church clearly shows the hardships the Chaldeans of Diyarbakir faced during the XXth century.