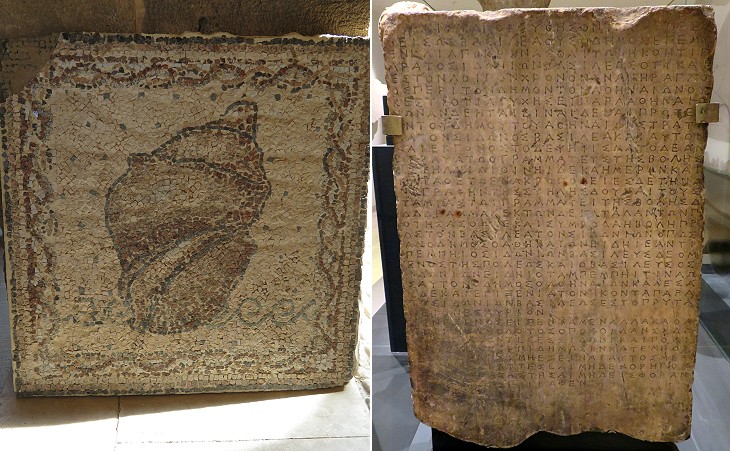 (left) Mosaic depicting a murex at Khan el-Franji: in antiquity at Sidon an expensive purple dye was made from its mucus; (right) Ashmolean Museum of Oxford: marble inscription dated 378-376 BC from the Acropolis of Athens containing a pledge of friendship between Sidon and Athens by which Phoenician merchants visiting Athens were granted some privileges

Near about Sidon begin the precincts of the Holy Land, and of that part of it in particular which was allotted to Asher. The borders of which tribe extended from Carmel as far as great Sidon, as appears from Josh. xix. 26, 28. But the people upon the sea coasts were never actually mastered by the Israelites; being left by the just judgment of God to be thorns in their sides, for a reason that may be seen in Judg. ii. 1,2,3.
Henry Maundrell - A Journey from Aleppo to Jerusalem at Easter - 1697
At two we entered a steep road on low uncultivated mountains, whence we saw Seyd two hours' distant. It stands on a low isolated hill, with a long promontory stretching behind it. (..) Anciently the inhabitants of Sidon were the best mariners of Tyre (Ezekiel, chap. 27), but all her commerce by sea is now confined to a few fishing boats. So truly has her history been anticipated in the Prophecies of Isaiah and Ezekiel.
William Turner - Journal of a Tour in the Levant - 1820
Saido the ancient Sidon still a fine shadow of the destroyed town of which even the very name is lost - no relic of its past grandeur.
Alphonse de Lamartine - Travels in the East - English edition by William and Robert Chambers - 1839.
The ancient wealth of Sidon is testified to almost entirely by the works of art which are on display at the Museum of Beirut and elsewhere and which are shown in another page. 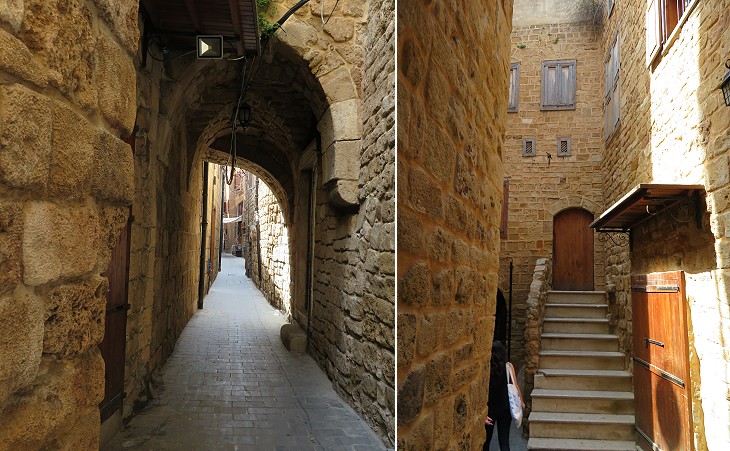 Alleys in the old town

Sidon is stocked well enough with inhabitants, but is very much shrunk from its ancient extent, and more from its splendour. (..) Whatever antiquities may at any time have been hereabout, they are now all perfectly obscured and buried by the Turkish buildings. Maundrell
Sidon contains at present within its walls, about 16,000 souls (of whom two-thirds are Turks, and the greater part of the remainder Greek Catholicks, with 500 Jews), and in the gardens out of them about 8,000 more. Its houses are numerous, and of stone, solid and well built; but a great part of them falling into ruins. (..) Its walls are formed of remains of the ancient ones, and of the houses, which, from their solid strength, are evidently of ancient construction. Turner 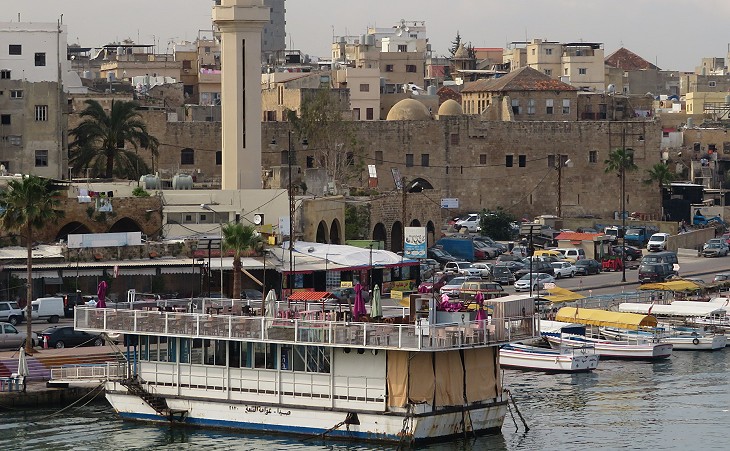 At the river we were met by several of the French merchants from Sidon; they having a factory there the most considerable of all theirs in the Levant. Being arrived at Sidon, we pitched our tents by a cistern without the city; but were ourselves conducted by the French gentlemen to the place of their habitation, which is a large kane close by the sea, where the consul and all the nation are quartered together. (..) The person, who is the French consul at Sidon, has also the title of consul of Jerusalem; and is obliged by his master, the French king, to make a visit to the holy city every Easter, under pretence of preserving the sanctuary there from the violations, and the friars who have the custody of it, from the exactions of the Turks. But the friars think themselves much safer without this protection. Maundrell 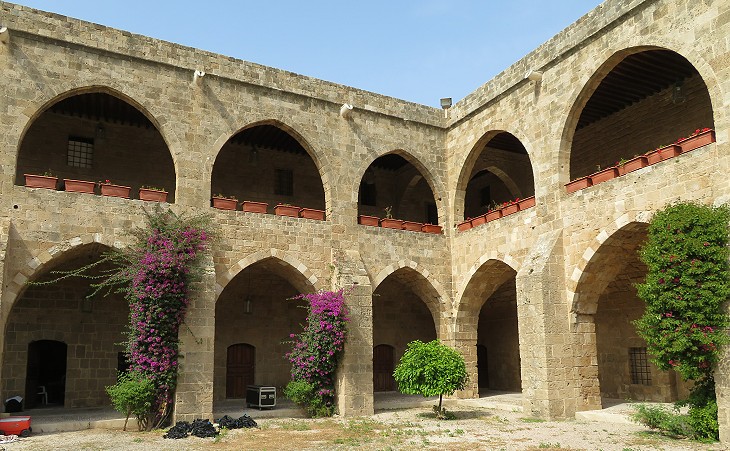 When I arrived at Sidon, I went to the convent of the monks of the Holy Sepulchre, to whom I was recommended, and was entertained by them during my stay at Sidon. I also received many civilities from the French merchants, and I was one day entertained by them with a collation in a garden, under the shade of apricot-trees, and the fruit of them was shook on us, as an instance of their great plenty and abundance. (..) The trade here is carried on entirely by the French, the export being chiefly raw silk, cotton, and corn. Their consul obliges them to live all in one Khan, in which the Jesuits, Capuchins, and the fathers of the Holy Sepulchre, have their respective convents.
Richard Pococke - A Description of the East and Some Other Countries - 1745
At half-past five I entered the French khan, in which I found the French consul, Monsieur Talibout, who received me very civilly. (..) In the city are six large khans, here called kellas, which, for want of houses, are generally full of lodgers. The kella of the French consulate is a considerable quadrangle (each side 150 feet), with a large basin well supplied with water in the middle, and sheltered cloisters round it, containing seventeen or eighteen houses (for the French factory here was formerly numerous), which are now let to Christians of the country. (..) The city contains several of these large quadrangular khans. Turner
At Saide we dismount at the French khan, an immense palace for our ancient commerce in Syria where our consuls united the natives of all countries under the standard of France. There is no longer any commerce, no longer any Frenchmen, there only remains at Saide in the vast deserted khan an old and respectable agent of France, M. Giraudin who has lived there for fifty years in the midst of his truly oriental family and who received us as a travelling countryman is always received in a land where ancient hospitality is preserved in full integrity. Lamartine 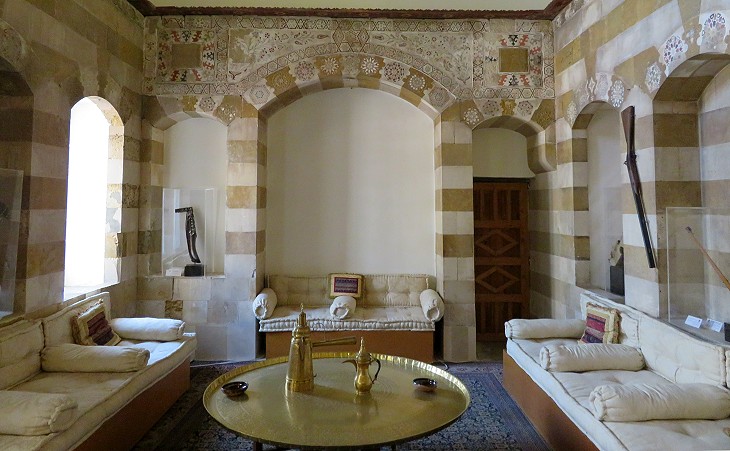 Debbané Palace, an XVIIIth century building the interior of which was refurbished in 1902 and again in 2000 after it had been greatly damaged during the Lebanese Civil War; a detail of its decoration is shown in the image used as background for this page. You may wish to see some images of the interior of Beiteddine Palace, an early XIXth century mansion, not far from Sidon

We dined and slept for some hours with this excellent family; hospitality is sweet thus accorded unexpectedly and lavishly bestowed; water for washing offered by the sons of the house; the mother and the wives of the sons attending on their feet to the arrangements of the repast. (..) The ancient Sidon offering no longer any vestige of its former grandeur we gave ourselves entirely to the amiable attentions of M. Giraudin and to the pleasure of talking with him about Europe and the East. Become a patriarch in the land of patriarchs, he and his family presented to us the image of the patriarchal virtues and recalled to us likewise their manners. Lamartine 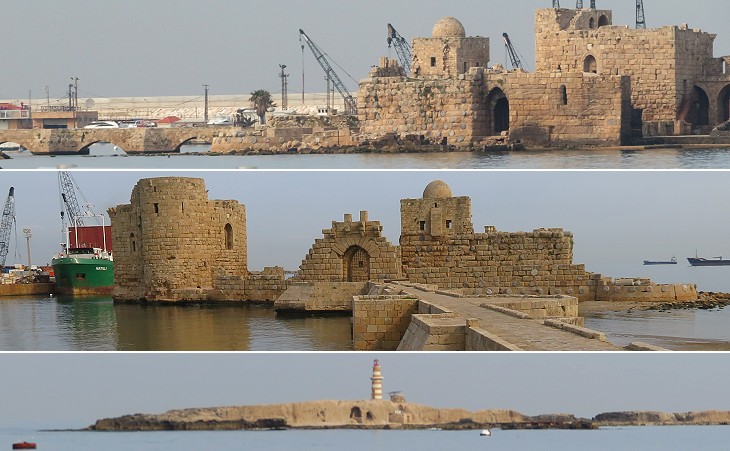 (above/middle) Views of the Sea Castle; (below) a ridge of rocks to the north of the harbour

Before the front of this kane is an old mole running into the sea with a right angle; it was of no great capacity at best, but now is rendered perfectly useless, having been purposely filled up with rubbish and earth, by Faccardine, to prevent the Turkish gallies from making their unwelcome visits to this place. The mole being thus destroyed, all ships that take in their burthen here, are forced to ride at anchor under the shelter of a small ridge of rocks, about a mile distant from the shore on the north side of the city. Maundrell
The sea nearly surrounds the town, forming a small bay to the south. Its form is an oblong, of which the north-east and south-west sides are the longest. (..) Its port was formerly a considerable square, protected by a fine mole, of which the ruins are still visible; but it is now choked up, and houses are standing where vessels have anchored. Turner
A circular jetty formed of enormous rocks surrounds a dock choked with sand and some fishermen, with their children wading in the water, push into the sea a boat without masts or sails, the sole maritime feature of this second queen of ocean. Lamartine 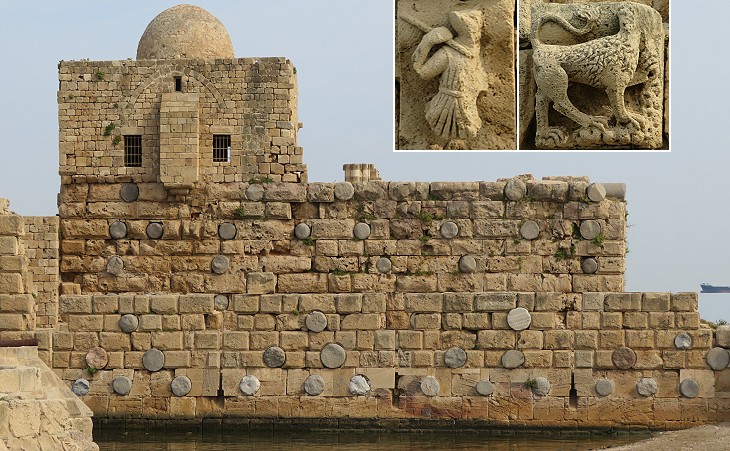 Seyd is defended by two small castles, both towards the sea, one on the north, projecting into the sea, and approachable from the land, only by a narrow stone bridge; and the other on the south; built it is said, the former by the Caliphs, the latter by St. Louis. Turner
The Crusaders built the Sea Castle in ca 1227, after the town had been occupied by Saladin in 1187-1197. They strengthened its walls by using granite columns, similar to what they had done at Beirut, Byblos and El-Mina (you may wish to see a section on the Castles of the Crusaders outside Lebanon). Sidon was part of the Kingdom of Jerusalem and it was conquered by the Mamelukes in 1291, shortly after the latter had managed to seize Acre which had become the capital of the kingdom in 1192. 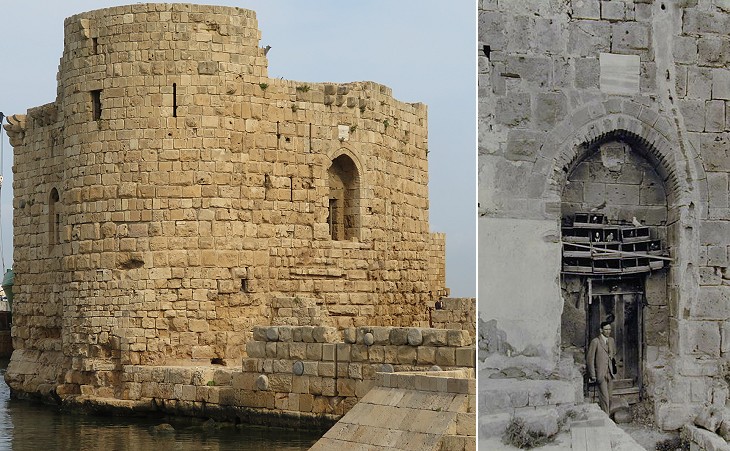 The castle was enlarged by the Mamelukes by the addition of a tower and other changes were made during the Ottoman rule. Archaeologists believe that the castle stands on the site of a temple to Melkarth, the tutelary god of Tyre (that of Sidon was Eshmun). This indicates that the town, although being much older than Tyre, at one point had to acknowledge the supremacy of the latter as suggested in Ezekiel 27:8 The princes of Sidon and Arvad were your (of Tyre) oarsmen. 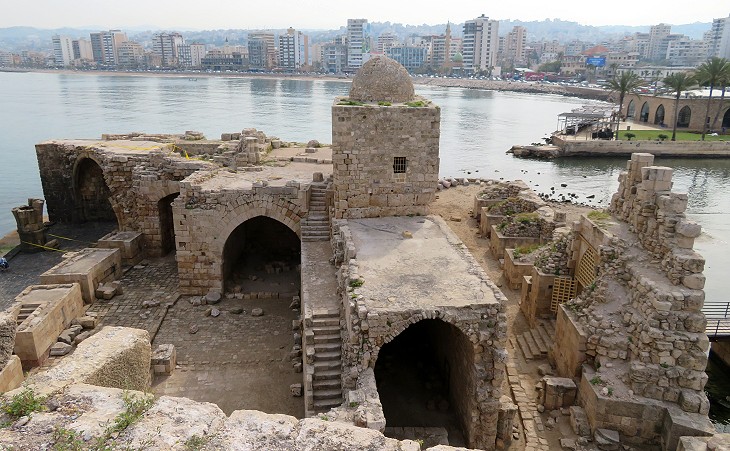 Sea Castle: view from the Mameluke tower showing the remains of a church (see them in the introductory page) on the left and the Ottoman mosque at the centre

In 1660 Sidon became the capital of a pachalik, an administrative division of the Ottoman Empire which included Southern Lebanon and Northern Palestine. The Sea Castle however was not upgraded to the new increased importance of the town and some pachas, in particular Ahmed al-Jazzar, governor in 1776-1804, chose to reside at Acre which they greatly fortified. After the 1860 French intervention in Lebanon, the administrative map of the region was redesigned and Sidon lost importance in favour of Beirut. 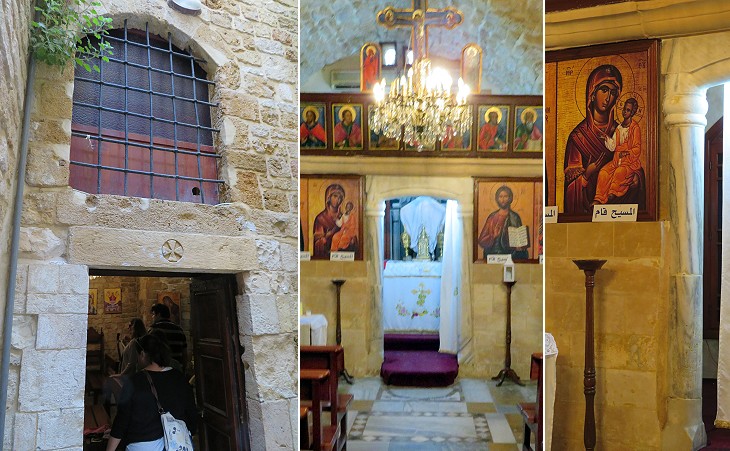 This church is hidden in the maze of narrow alleys of the old town and in many ways it is a symbol of the troubled Christian presence in Lebanon. It was built in the VIIIth century on a site where St. Paul prayed during his journey from Jerusalem to Antioch. It did not have a façade because Muslim rulers did not permit it, but the interior was embellished with ancient columns. It was the Sidon cathedral of the Greek Orthodox Patriarchate of Antioch and All the East, but in 1724, after the appointment of a new controversial Patriarch, the faithful split and the majority of them joined the newly-founded Melkite Greek Catholic Church. The right to pray in the cathedral caused continuous rifts between the two Christian communities until in 1819 Ottoman authorities imposed the construction of a wall which created two independent churches. The Greek Orthodox continue to use their section, whereas the Greek Catholics have built another cathedral dedicated to St. Nicholas. 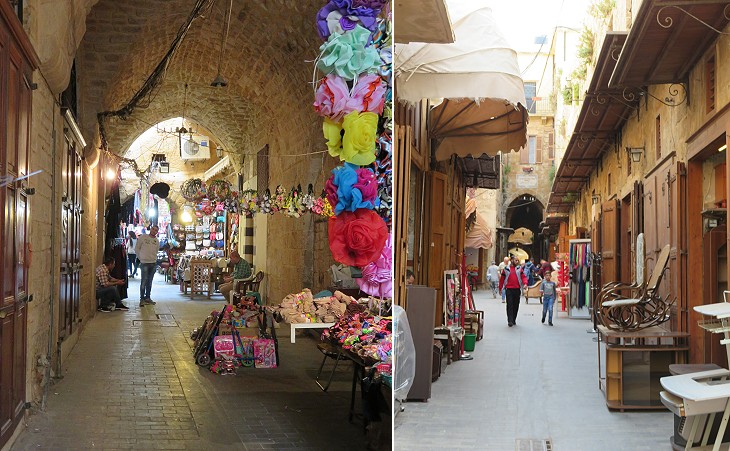 Sidon was particularly affected by the devastating Lebanese Civil War (1975-1990). The town is still the site of political and religious tensions which in 2013 erupted in violent clashes between Sunnis (who are predominant in town) and Shias (who control the surrounding rural areas). These events have hindered the economic development of Sidon, but at the same time they have prevented its historical souks from being replaced by modern ones as it occurred at Beirut. 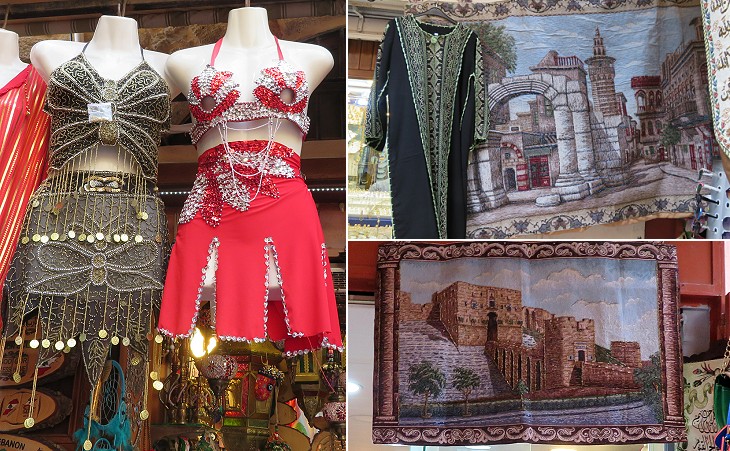 On sale at the souks: (left) underwear you would not expect to see in an apparently prudish society; (right) small wall hanging tapestries showing the Roman Arch of Damascus and The Citadel of Aleppo (perhaps for the many Syrians who have moved to Lebanon because of the civil war which began in 2011)

Move to Ancient Sidon in the Museum of Beirut.