- Aleppo - Pre-Ottoman Monuments
(Detail of a relief at Karatepe)

You may wish to see an introductory page to this section with a map or a page on the Citadel of Aleppo first. 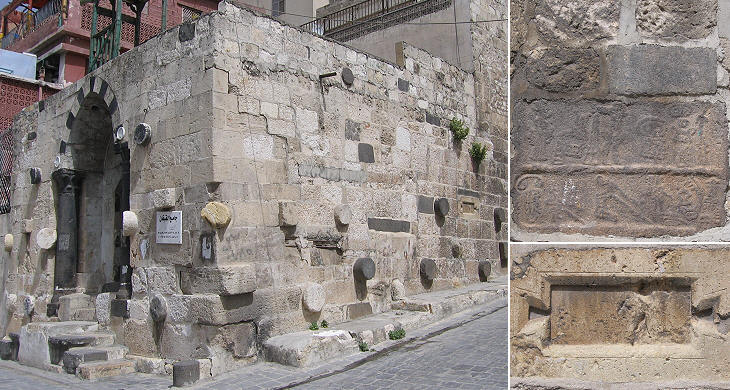 Of its ancient past, Aleppo retains only minimal evidence which can be found in some of its earliest mosques. Al-Qayqan (of the ravens) Djami is located on the walls of the city very near Bab Antakya; it was built making use of ancient stones and columns; however it is unlikely that the original building was a mosque, because its east-west orientation is contrary to the Muslim practice of orienting mosques towards Mecca, which in Aleppo means having a north-south orientation. As a matter of fact the religious rule requires only a mihrab, a niche in the wall of the prayer hall, indicating qibla, the direction of Mecca, but usually the whole mosque is oriented accordingly.

At-Toutè Djami: detail of the Kufic inscription written on the old Roman entablature

At-Toutè Djami was built making use of structures of a triumphal arch which marked the beginning of decumanus maximus, the main east-west road of Roman Aleppo; also in this case the orientation of the building does not comply with Muslim tradition. Elements of the arch are still visible although they were modified in order to house an elaborate Kufic inscription. 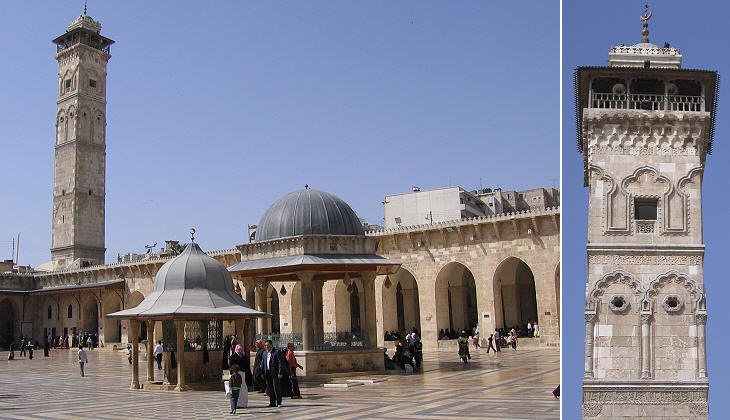 The Great Mosque of Aleppo was built in the VIIIth century when the city was part of the Umayyad Caliphate based in Damascus and its design was based on the Great Mosque of that city. Aleppo however, unlike Damascus, was retaken in 962 by the Byzantines, who for a certain period included the city in their empire; the Great Mosque was sacked and deprived of its decorations. Its current aspect is mainly due to a reconstruction by the Mamelukes, whereas the square minaret was built by the Seljuk Turks in the late XIth century.
The conquest of Jerusalem by the Seljuks prompted the launching of the First Crusade; on their way to the Holy Land, the Crusaders briefly seized Aleppo and established Christian states to the west of the city (Principality of Antioch) and to its north (County of Edessa, now Sanliurfa). 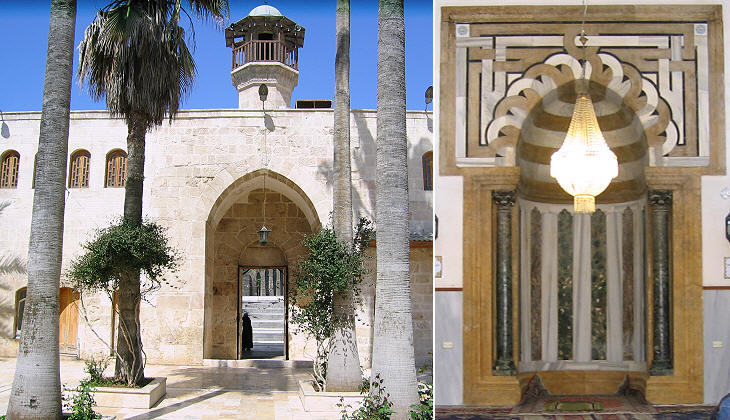 The Muslim reaction to the Crusades started from Aleppo, where Imad ad-Din Zengi, Atabeg (governor) of the city and of Mosul first strengthened his position as regional leader and then waged war on Edessa, which he captured in 1144. Nur ad-Din, son of Zengi, expanded the territories under his control at the expense of the Principality of Antioch; he was eventually succeeded by his general Salah ad-Din (Saladin) who in 1187 retook Jerusalem and founded the Ayyubid dynasty which ruled over Egypt and Syria until the 1260 Mongol invasion.
The main monument of that period in Aleppo is the renovation of the Citadel by Saladin's son; he built also an elegant medrese which includes his mausoleum at the foot of the Citadel. 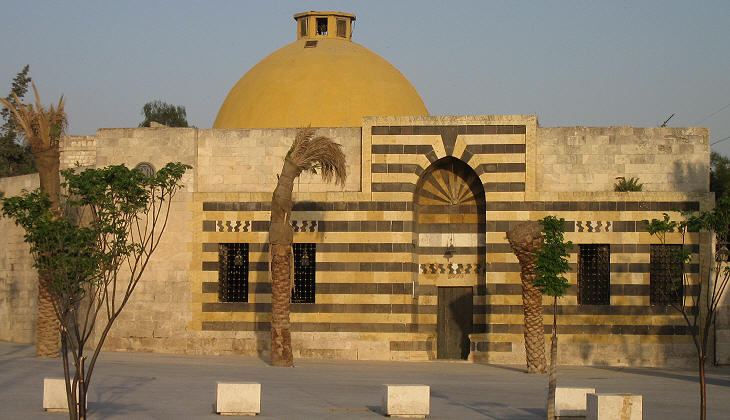 After conquering Aleppo, the Mongols advanced towards Egypt but they were checked and defeated by the Mamelukes, soldiers of slave origin who had taken control of Egypt by repelling a Crusader invasion in 1249. The Mamelukes were able to expand their power into Syria including Aleppo. They then undertook a series of attacks on the remaining Christian territories; in 1291 the fall of Acre and Tortosa (today's Tartous) meant the end of the western presence in the region (with the exception of the Kingdom of Cyprus). These events had a positive effect on Aleppo because Venetian and Genoese merchants looked for new locations to establish their trading bases and some of them settled in Aleppo. 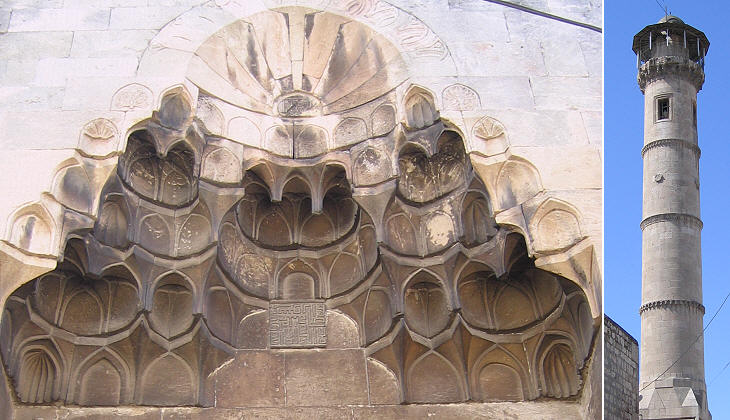 Ar-Roumi Djami (1366); (left) detail of the portal at the centre of which there is a maze-like inscription praising the Lord (similar inscriptions are very common in Diyarbakir); (right) its round minaret

In 1375 the Mamelukes conquered Sis, the capital of the Kingdom of Lesser Armenia; Armenian and Maronite merchants moved to Aleppo; a Christian quarter started to develop outside the northern gate of the city.
Although Aleppo was remote from the centre of the Mameluke power which was based in Egypt, several monuments indicate that in the XIVth century the city knew a period of growth. 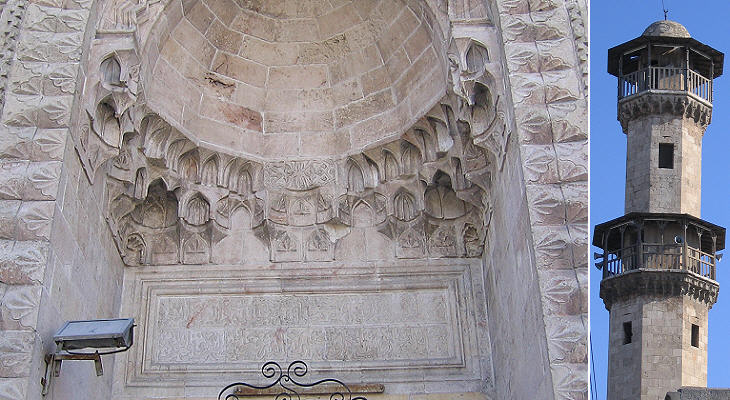 In 1400 Timur invaded Syria and sacked Aleppo where he massacred many of the inhabitants; he was however unable to establish permanent rule over the region and the city returned under Mameluke control. The XVth century was marked by the decline of Mameluke power vis-à-vis the expansion of the Ottoman Empire; in 1468 Sultan Mehmet II conquered the Emirate of Karaman, a buffer state between the Ottoman and Mameluke possessions. 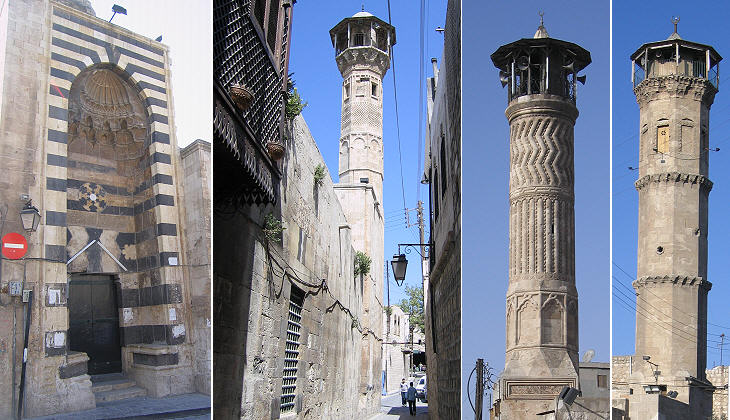 Mameluke minarets are usually characterized by an octagonal shape; unlike the Ottoman ones they do not remind of a lancet, but they rather resemble a lighthouse, owing to the shape of the balconies from which muezzins announce the prayer time. In most cases Mameluke minarets were built above the entrance to the courtyard where the mosque was located. 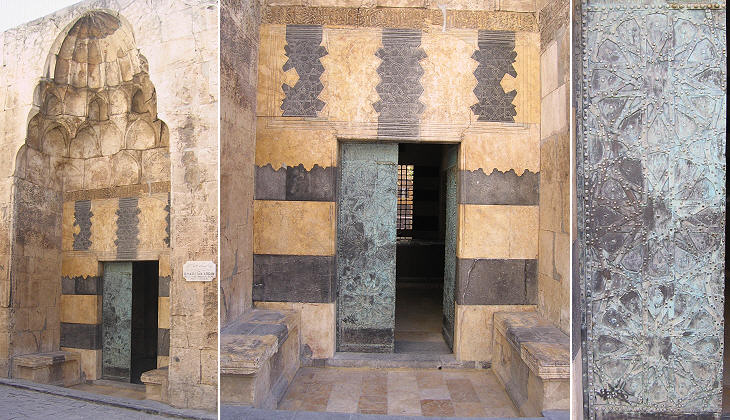 Bimaristan Argoun: portal and detail of the door

The finest monument of the Mameluke period is a hospital built in 1354 by Argoun al-Kamili, the governor of the city. It was designed in a way to help soothing patients' anxieties and a section was reserved to patients with mental illnesses. The entrance leads to a courtyard where the patients were examined. 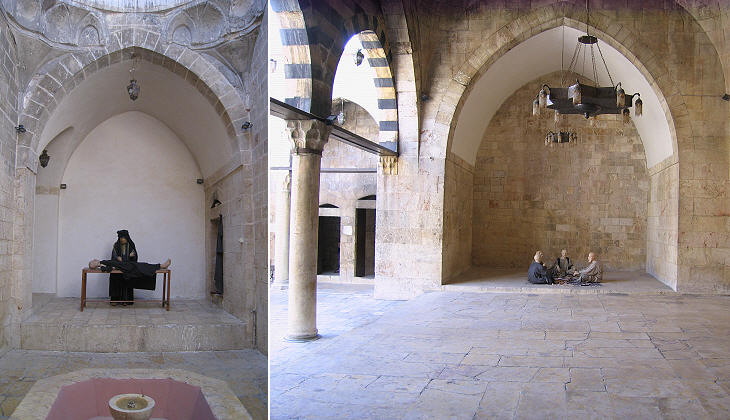 Bimaristan Argoun: (left) iwan of a minor courtyard; (right) portico and iwan of the central courtyard

Because in summer temperatures in Aleppo can be very high, the hospital had deep porticoes and niches (iwan) facing north: iwan means a place to take shelter; its orientation ensures it is in the shadow for most of the day, while its height favours the circulation of air (you may wish to see the iwans of the Friday Mosque of Isfahan). 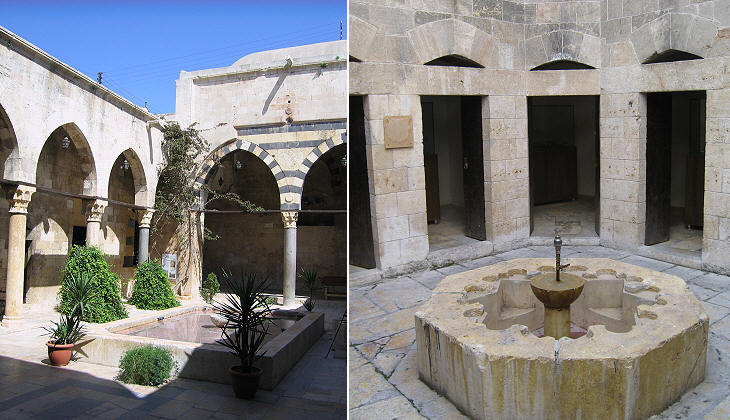 Each courtyard had a fountain; Arab doctors believed that the sound made by running water had a soothing effect on the minds of the patients. You may wish to see a similar, but Ottoman, hospital in Edirne.
The positive effect of baths and fountains was already established by Galen of Pergamum in the late IInd century AD.
The image used as background for this page shows a detail of Matbakh al-Ajami a XIIth century Ayyubid building.