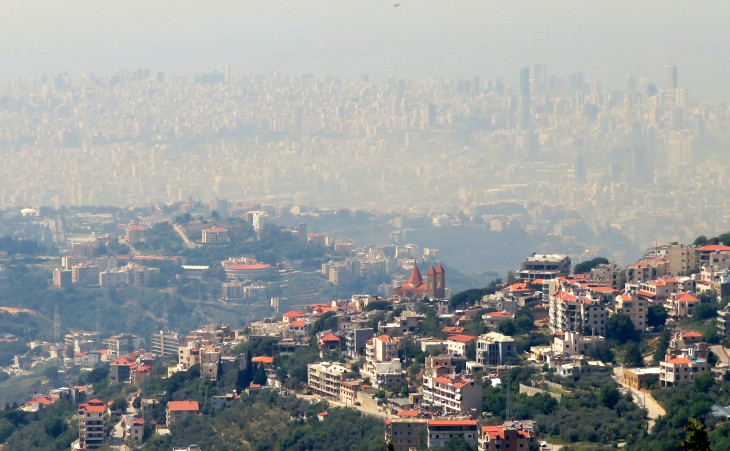 On another beautiful day (March 13, 1852) I made an excursion to Deir el-Kulah, a Maronite convent east of Beirut; where are the remains of an ancient temple, probably Phoenician. (..) The gorge of the river was on our right, as we continued to ascend; and we could see in it the remains of an ancient aqueduct along its southern side. (..) The convent stands on the top of this buttress. (..) We wound around the western slope and ascended with difficulty. (..) Here the traveller finds himself on the crest of a thin ridge; (..) the convent stands upon the high extremity, at an elevation of 2,200 feet above the sea. The view from this point is extensive and interesting. Towards the west it commands the city of Beirut and its whole plain with the Mediterranean beyond. Probably the island of Cyprus is visible in clear weather; but it did not occur to us at the moment to look for it.
Edward Robinson / Eli Smith - Biblical Researches in Palestine and the Adjacent Regions - A Journal of Travels in the Years 1838 and 1852
Air pollution is a main health hazard for the inhabitants of Beirut and those who can afford it live on the ridge of hills where Deir el-Qalaa is situated. Their daily commuting by car worsens the level of pollution. 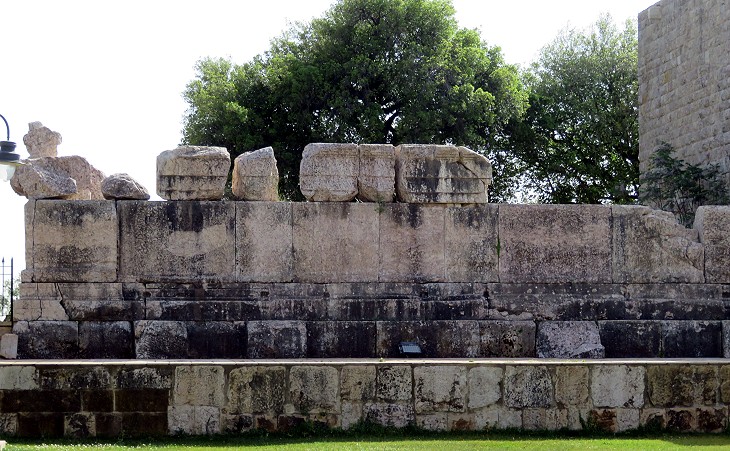 Platform of the temple

The front was towards the northwest, looking down upon the plain and sea. (..) Portions of four columns, and the pedestal of a fifth, are still in place; but no corresponding capitals are found. (..) Of the body of the temple, only the foundations and portions of the lower courses remain. Robinson & Smith
Deir el-Qalaa means Convent of the Citadel: it was founded in 1748 by members of the Antonin Maronite Order on the site of a small fortress nested in the ruins of a Roman temple. The construction of the temple is dated IInd century AD and its size testifies to the importance of Roman Berytus (Beirut). 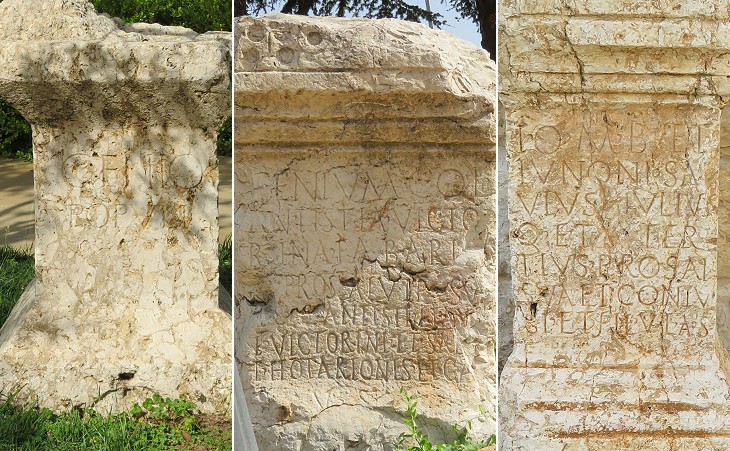 Inscriptions in the garden of the monastery: (left) pedestal of a statue of the Genius of the Colony (of Beirut); (centre) a similar pedestal offered by Antistia Victorina Fabaria, the last word perhaps indicating she was a seller of broad beans; (right) a dedication to I(ovi) O(ptimo) M(aximo) B(almarcodi) et Iunoni

Scattered about on stones built into the walls and other parts of the convent, are not less than eight or ten Greek and Latin inscriptions. (..) Most of them obviously mark votive offerings, such as tablets, altars or stelae consecrated to the god of the temple. (..) Their present position are merely accidental. (..) In a short Latin inscription we find the dative: IOVI BALMARCODI. Robinson & Smith
The dedication to Jupiter Balmarcod is an example of syncretism which combined beliefs of the Greek/Roman world with those of the Egyptian/Phoenician one, similar to what occurred at Baalbek, at Qalaat Faqra and at Baetocece. Balmarcod, a Phoenician god, was referred to as the very great so he was associated to Jupiter, but in essence he was the genius loci, the protective spirit of the place. Cella of the temple

The convent church is built on and within the old foundations at the northwestern part. Robinson & Smith
The temple had a very large cella and most likely a design similar to that of the Temple of Bacchus at Baalbek. Because of its size and position it was clearly visible from the sea. Some inscriptions indicate that it was dedicated also to Juno and often temples which were a landmark for seafarers were dedicated to a goddess (e.g. Isis at Sabratha and Aphrodite/Venus at Amathous). These inscriptions refer to Juno as dea or regina (queen). The latter epithet is typical of Rome where the goddess was portrayed as a queen. 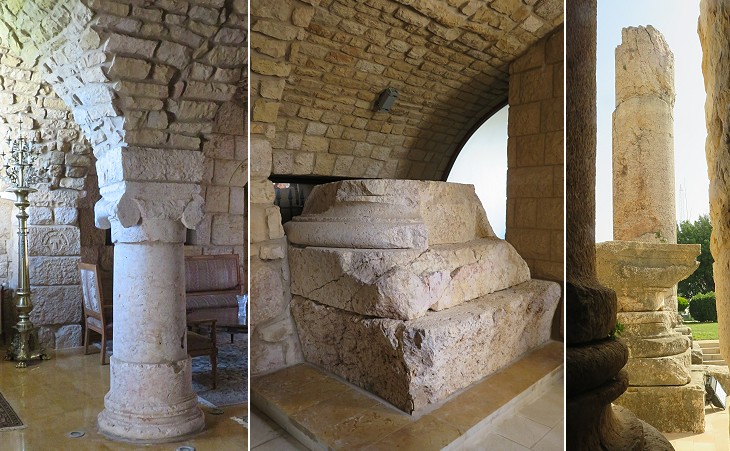 Fragments of the temple inside and outside the monastery

During the conflicts between Druzes and Maronites (1840-1860) which led to the intervention of France and other European powers in Lebanon the monastery was damaged by fire twice and during WWI it was occupied by the Ottoman army. In the course of the Civil War (1980-1995) some of the monks were killed and the others had to flee for safety. The building was greatly damaged and then turned into a barracks by the Syrian army until 2005; its current aspect is almost entirely new, although it still incorporates parts of the temple. The image used as background for this page shows a relief of the head of a bull on a marble vessel inside the monastery. 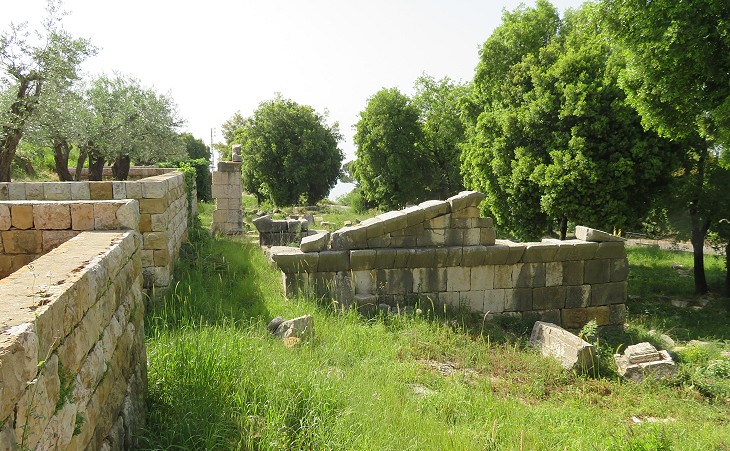 Temple (B) near the monastery

In 1900 Sébastien Ronzevalle, a Jesuit professor at the Catholic University of Beirut, wrote a detailed report on Deir el-Qalaa; he noticed that some of the inscriptions mentioned in earlier texts had disappeared and that the descriptions of some details of the temple were no longer consistent with the current aspect of the building. His report did not make reference to materials from another temple which now stand at the side of the monastery. They were found in the 1960s and they were partially reassembled, perhaps in a preliminary effort to reconstruct the ancient building in its entirety. Some archaeologists suggest that Temple (B) was specifically dedicated to Juno. Its current state reflects the dramatic events which occurred in Lebanon and which prevented archaeologists from completing their projects. 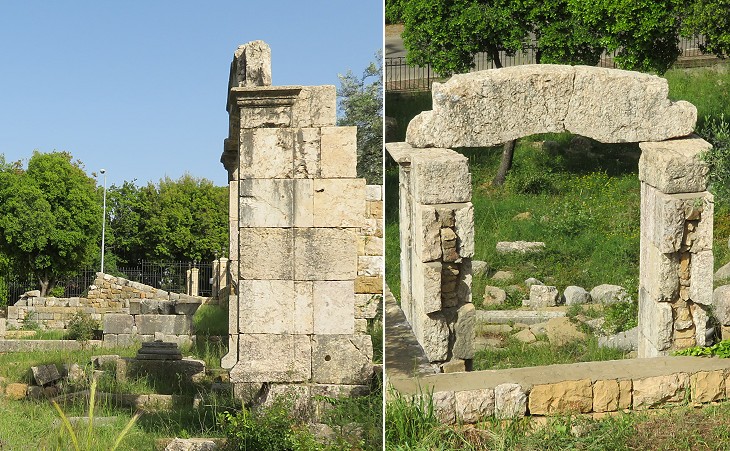 Monumental gateway near Temple (B) (left) Archaeological area on the road to Beit Mery with evidence of a colonnaded street; (right) a partly reconstructed building

We returned home by another route; passing first to Beit Miry; a large village just back of the monastery. Robinson & Smith
The excavations carried out in the 1960s unearthed the foundations of many ancient buildings on the side of the hill looking inland, including the scattered stones of a third small temple. Archaeologists did not need to dig deeply to found them. They did not belong to a rural settlement, but they were related to the main temples at the top of the hill, the ancient road to which crossed this area. 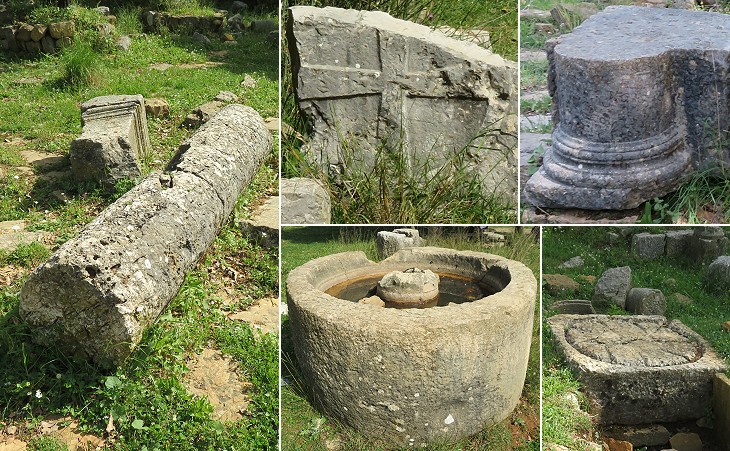 Details of buildings and other materials in the archeological area

When worship at the temples ended some of the buildings were used for agricultural purposes and millstones have been found. There is not much evidence of archaeological or even maintenance activities in this site which nevertheless has its own charm, especially when a shepherd drives his flock into it as it sometimes occur in remote sections of Via Appia Antica. 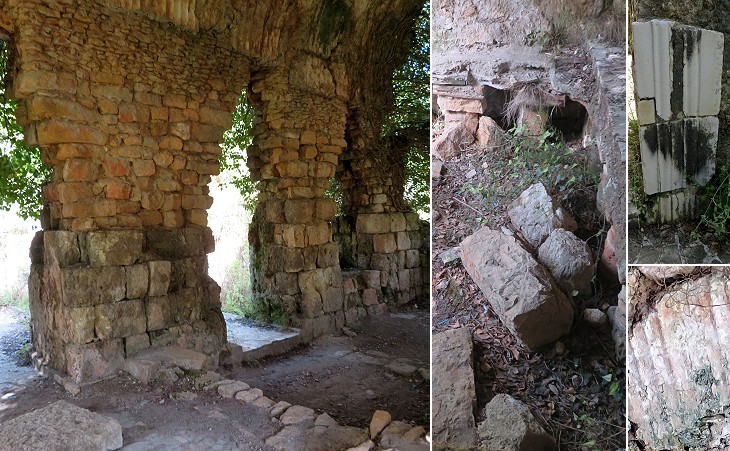 Archaeologists found evidence of a Byzantine church and discovered that it was built inside a hall of Roman baths. They felt that both monuments deserved being made visible and with a somewhat daring decision they removed the floor and some architectural elements of the church, they rebuilt the hall of the baths and unearthed its heating system. Because of the vegetation which has grown upon the vaults of the hall, the latter has acquired the appeal of an original ancient ruin. 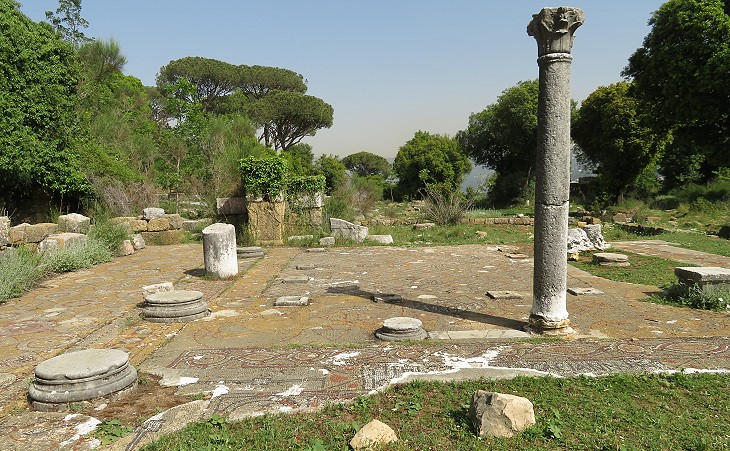 The architectural elements of the church were placed at the side of the baths. Columns and plinths were most likely taken from the baths or some other monuments, but the mosaic floor was made for the church. 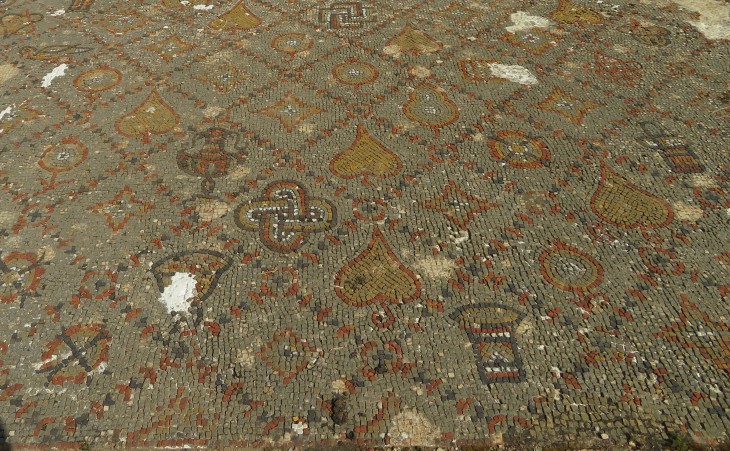 Lebanon had a flourishing tradition of mosaic making which did not fade away with the move to the Christian faith as shown by a beautiful floor mosaic from a church near Tyre, now at the Louvre Museum and by other mosaics from early churches at the Palace of Beiteddine. This floor mosaic is dated VIth century based on its artistic features and most likely it was made before the Beirut Earthquake which destroyed the city in 551.