You may wish to see an introductory page to this section or a page on Beiteddine Palace first. 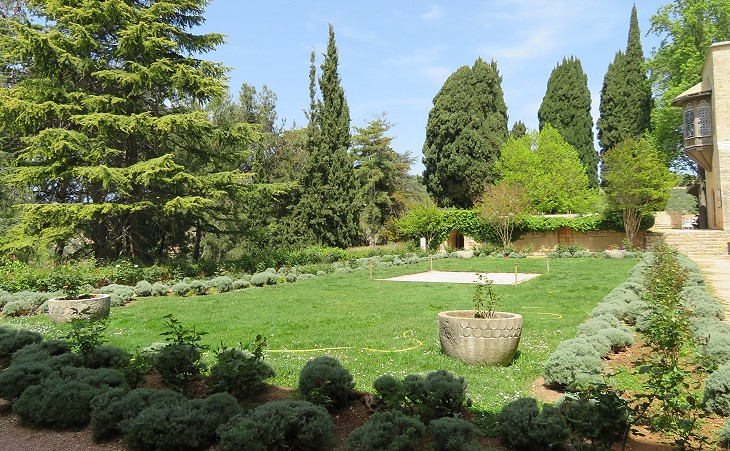 March 23, 1993 - Beiteddine, Lebanon
Granted, it's not the way most countries might choose to preserve and protect an important bit of national heritage. But then, Lebanon is not most countries. Yes, it's true that the exquisite Byzantine mosaics on display at a mountaintop palace here were originally part of the flooring of a 6th-century seaside town. (..) It's also true that the Druze warlord-turned-government minister who spirited the mosaics into the hills remains their real caretaker. (..) Druze leader Walid Jumblatt remains something of a cultural hero nevertheless, a sort of one-man Ministry of National Treasures who rules the mountainous region known as the Shouf with a green thumb on his iron hand. The story of Beiteddine, Jumblatt and the mosaics begins in Jieh, a village 20 miles south of Beirut on the Mediterranean coast. Near there are the ruins of the 6th-Century Byzantine city of Porphyrion, (..) European travelers of the 18th and 19th centuries wrote of the exquisite mosaic flooring in Porphyrion's church and dwellings. So prized were these works of early Christian art that in 1863 an entire mosaic from this area was presented to Napoleon III. But in more recent times, wind and sand worked together to bury the city, its ruins hidden until greed began to undo nature's work. From the beginning of Lebanon's civil war in 1975, profit-minded militias saw the 30-to-40-foot-high sand dunes as a gold mine because builders, who needed sand for construction, paid $400 a truckload for the stuff. And by the mid-1980s, the ruins of Porphyrion and its mosaics were exposed. Archeologists say it was fortunate that Jumblatt's troops were in control at the time because the Druze leader understood the historic and cultural value of the mosaics and ordered the mining halted.
Marilyn Raschka - Los Angeles Times 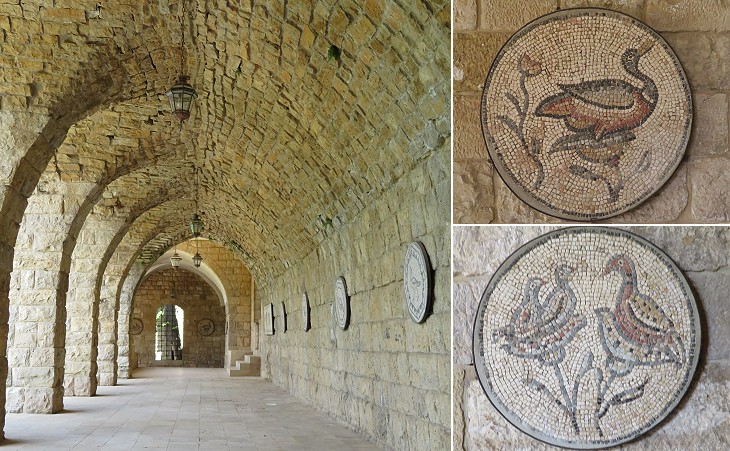 Small fragments of mosaics in the porch of former stables

Jumblatt gathered a team of experts who lifted the polychrome mosaics - with their Byzantine themes of early church saints, flora and fauna - from the sands. They stuck them temporarily to heavy cloth and rolled them scroll fashion for transfer. From their seaside site they were moved to Jumblatt's mountain fiefdom and into the palace of Beiteddine. There was an initial storm of criticism over his removal of the mosaics from their seaside home, but his defenders are philosophical. "Better to see the mosaics here than abroad," said archeologist Helgan Seeden, a professor at the American University of Beirut. (..) Today the Byzantine mosaics are handsomely exhibited in the restored, vaulted stone stables of the Beiteddine palace. From this 2,800-foot perch overlooking a dramatic ravine, the seacoast from which they came glistens 12 miles away. By his own estimates, Jumblatt has spent $7 million to restore the palace, its museums and its exhibition of Porphyrion's mosaics. Marilyn Raschka - Los Angeles Times 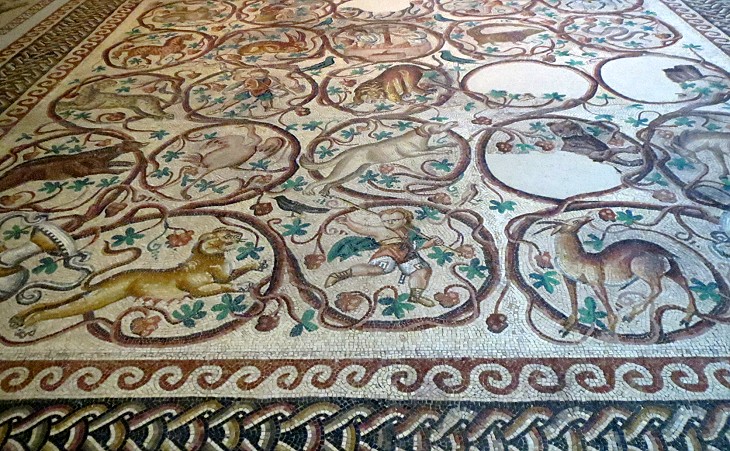 Louvre Museum: floor mosaic from the nave of a church at Qabr Hiram near Tyre

The floor mosaic presented to Napoleon III was found by French philosopher Ernest Renan during his stay in Lebanon after the 1860 French intervention in the country to protect the Maronites. Its finest section is that which decorated the nave of the church; it depicts a variety of animals and scenes of farming activities inside a stylized grapevine, a subject which became popular among the Christians as early as the beginning of the IVth century (see a sarcophagus and mosaics at S. Costanza in Rome). It derived from earlier patterns which were based on acanthus scrolls rather than grapevines (see a Roman mosaic found near Philippopolis, a town in Syria). 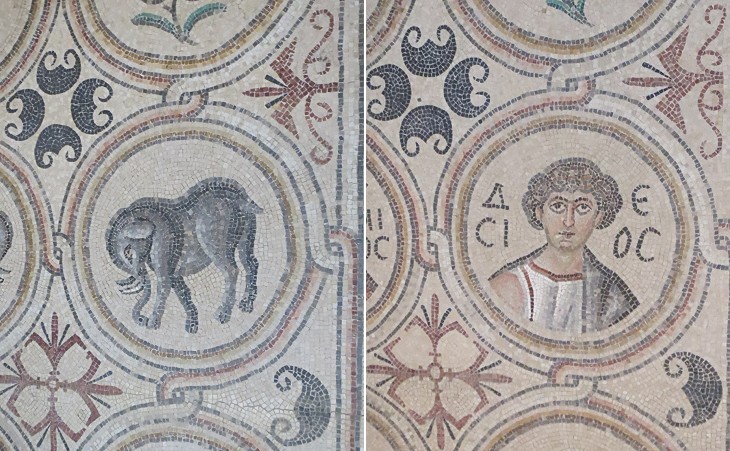 Louvre Museum: floor mosaic from the aisles of a church at Qabr Hiram near Tyre: details showing an elephant (left) and the personification of a month (right)

The conquest of Syria and Lebanon by Alexander the Great and the establishment of the Seleucid Empire in these countries in the late IVth century BC brought about the adoption of the solilunar Macedonian calendar. After the Roman conquest the solar Julian calendar was introduced, but because Greek was the prevailing language the months maintained their Macedonian names, so Daisios (Desios in this mosaic) corresponded to Roman Maius (May). Wild animals and personifications of seasons and months had always been popular subjects for large floor mosaics and the tradition continued in Christian churches e.g. at Kissufim near Gaza and at Aquileia. 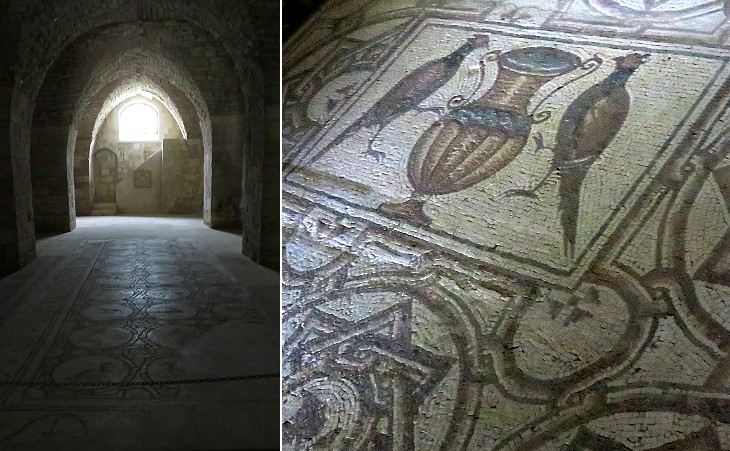 Beiteddine Palace: (left) mosaics on the floor of the former stables; (right) detail of one of them which depicts a typical Christian subject

Some of the finest floor mosaics from Jieh and other locations of southern Lebanon are on display in former stables of Beiteddine Palace. While the decision prevents the exhibits from being damaged by weather conditions, it does not always permit a proper observation of them because of insufficient natural light. They rarely portray saints or other holy figures (see two examples in the introductory page); that may originate from a law passed by Emperors Theodosius II and Valentinian III in 427 that prohibited the depiction of Christ and Christian symbols on floors: Signum Christi nemini licere vel in solo, vel in silice, vel in marmoribus humi positis, insculpere vel pingere (It is forbidden to sculpture or paint the image of Christ on the ground or on stone and marble floors). 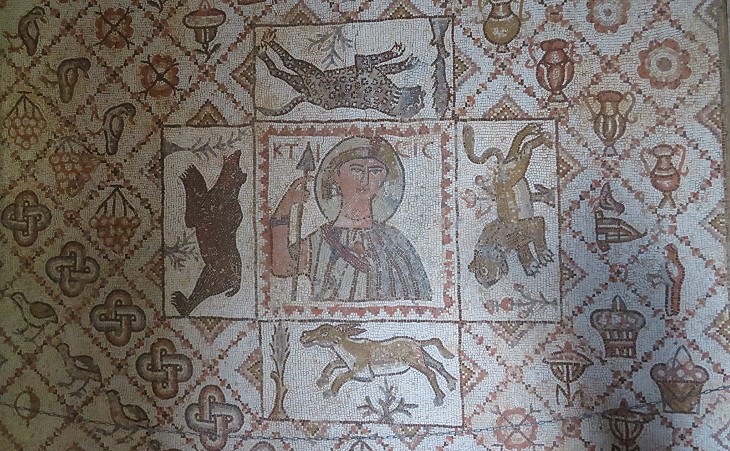 Beiteddine Palace: "Mosaics of Ktisis" which was found at Ouzai, a suburb of Beirut

Not all the floor mosaics at Beiteddine are clearly related to a church, but their style dates them Vth or VIth century when Lebanon was entirely Christian. Ktisis is an allegoric figure symbolizing foundation and not a Greek goddess. In this mosaic she was portrayed in a rather iconic way, in line with the general tendency to move away from traditional Roman realism. More lively depictions of Ktisis can be seen in mosaics at the House of Eustolius at Kourion on Cyprus and at Antioch. 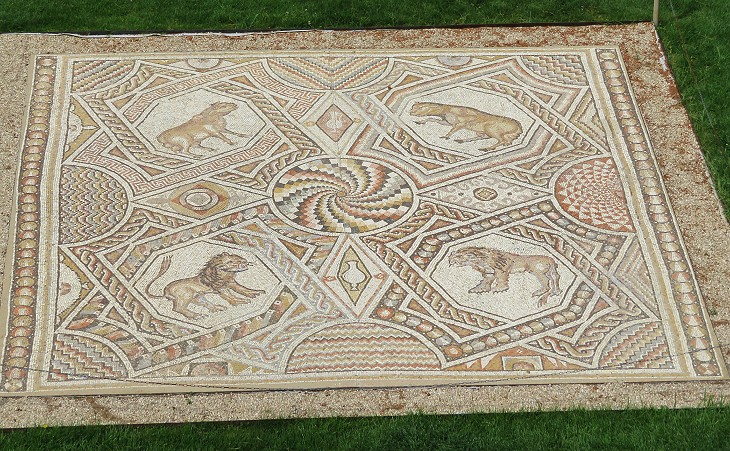 Floor mosaic in the terrace adjoining the palace

The making of an elaborate floor mosaic required teamwork. Calcis coctor was in charge of preparing the mortar, the quality of which was key to ensure the duration of the mosaic. Pavimentarius prepared the floor by laying the lower layers of the mosaic. Tessellarius made the simple parts of the mosaic such as geometric frames. Pictor musivarius executed the most elaborate sections based on drawings made by Pictor imaginarius. These last two activities were often combined. In this mosaic the geometric pattern which includes some optical effects (similar to those at Thysdrus), is very elaborate and well executed and it is possible it was made by the same craftsman who worked at depicting the four beasts. 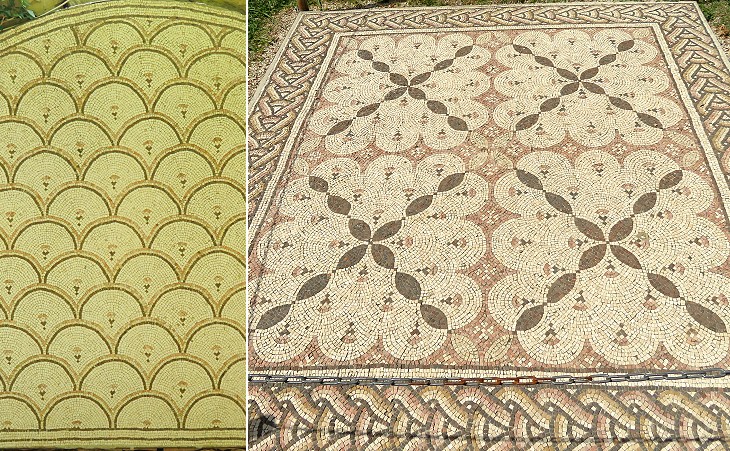 Geometric floor mosaics; the image used as background for this page shows another geometric mosaic

The decoration of these two fine geometric mosaics is based on the depiction of small pink flowers, a feature which can be noticed also at Tyre and at Diocaesarea (Zippori), an important Roman town in Galilee. Perhaps teams of skilled mosaic makers travelled in the region and disseminated techniques and patterns which influenced the local craftsmen. 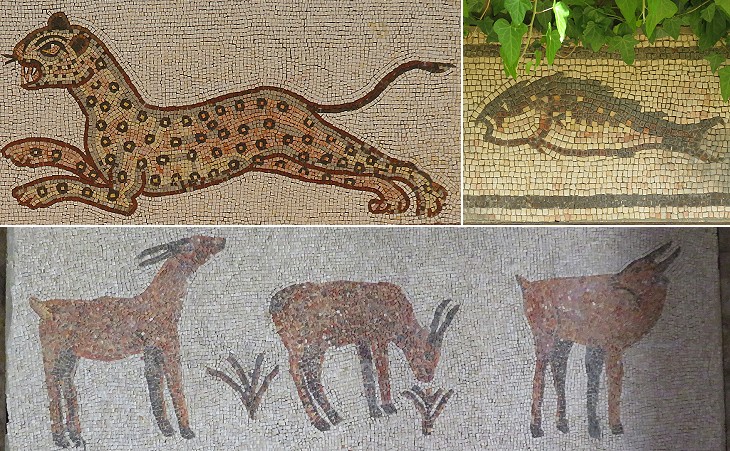 If Jumblatt had not acted, they say, the floor-sized mosaics would have been divided into pieces suitable for framing or for use as decorative tabletops and been sold off to private European or American collectors.
Marilyn Raschka - Los Angeles Times
As a matter of fact many fragments of floor mosaics are hung on the walls of the stables and of the gardens as if they were isolated paintings. 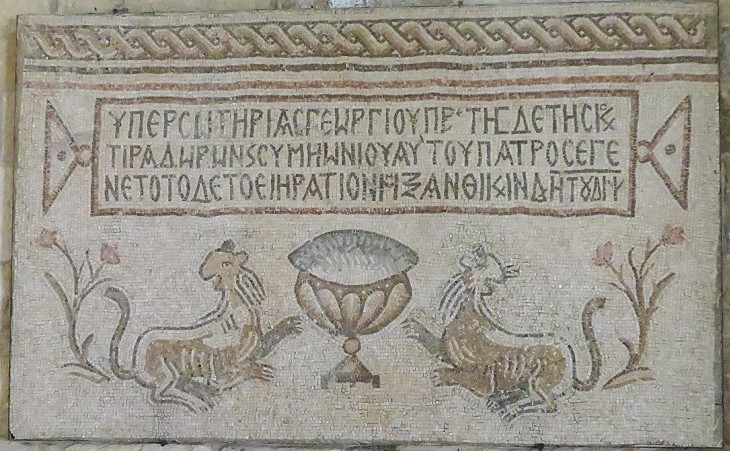 Floor mosaic from a church at Saddiqin near Tyre

Some inscriptions on the floor mosaics helped archaeologists in dating them and in learning the old names of the locations where they were found and of some of their priests. This mosaic contains a dedication to George, priest of the village of Tiadora, in the year 714 of the calendar of Tyre which corresponds to the year 589. Its poor execution could reflect the economic decline of Lebanon after the 551 Beirut Earthquake which not only destroyed that city, but caused great damage to all the coastal towns. The town of Madaba in Jordan retains the floor mosaics of many early churches, including some which were made after 551 and, at nearby Umm ar-Rasas, some which were made even after the Muslim conquest. 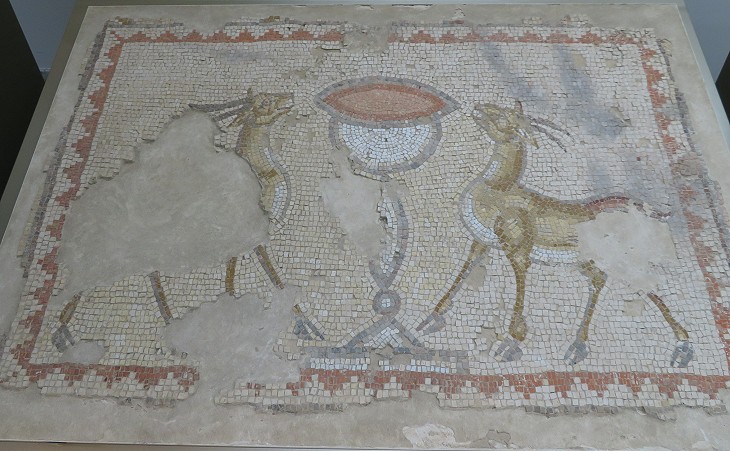 Airport of Beirut: floor mosaic from a church designed out of a Roman temple at Chhim in the Bekaa Valley, the yield of very recent excavation campaigns