In 1516 at the end of a swift campaign Sultan Selim I conquered Syria which remained an Ottoman possession for more than 400 years; in the following year he invaded Egypt and put an end to the Mameluke rule in the Levant; the success of his campaigns was mainly due to the large use of firearms, which his enemies regarded as unfit for Muslim warriors.
This aspect was disregarded by the religious leaders of Mecca who gave Selim the title of Servant of the two holy cities (Mecca and Medina) which meant that he and his successors were in charge of organizing every year the caravans of pilgrims that reached Mecca from Cairo and Damascus. 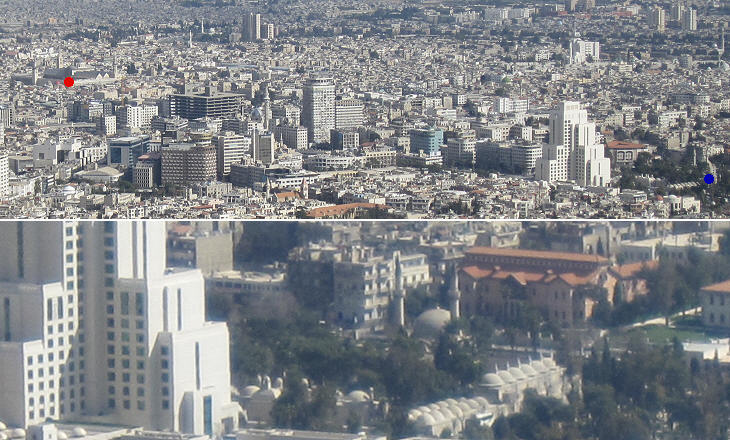 During the Ottoman rule Aleppo replaced Damascus as the most important Syrian manufacturing and trading centre, but the latter, because of its role in the pilgrimages to Mecca, was embellished by the sultans with monuments, the most imposing of which is Tekkiye Suleymaniye; it is situated at a significant distance from the Old Town walls on the site of a palace built by Mameluke Sultan Baibars in 1264. 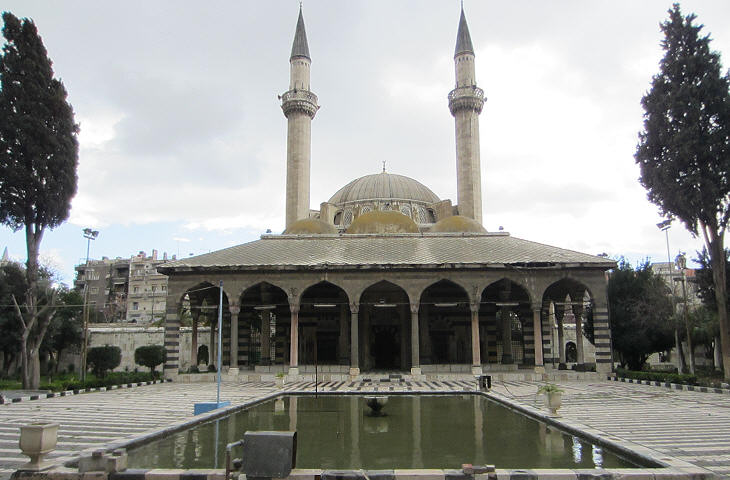 The Dervishes of the Mevlevi Order enjoyed the favour of the sultans and were loyal to them; Sultan Suleyman commissioned Sinan, his chief architect, the construction of a tekke (convent/school) for the Dervishes which was enlarged to include facilities for the pilgrims (a kitchen soup, a caravanserai and a hospice). 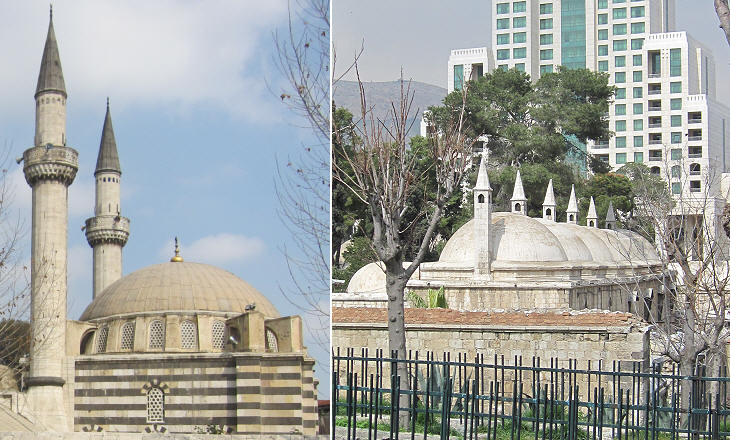 The complex was located on the southern bank of the Barada River and it was surrounded by gardens; today its elegant Ottoman design is diminished by big modern buildings and busy roads.
The image in the background of this page is based on the glazed tiles which decorate the entrance to the cells. 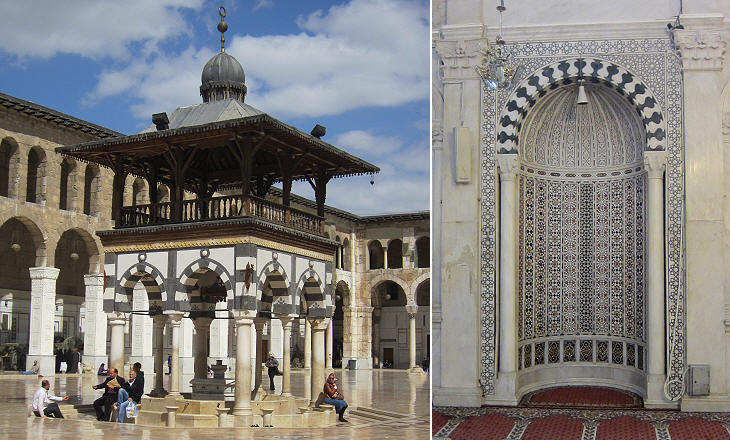 Umayyad Mosque: (left) fountain for the ablutions with Ottoman additions; (right) one of the three mihrabs in the prayer hall

The Umayyad Mosque was regarded as a holy site and the sultans preferred not to modify its unique design; they made some changes to its minarets, they restored the prayer hall after a major fire, they added some decorations here and there, but nothing very significant, as they concentrated their attention on giving a monumental appearance to the initial leg of the Road to Mecca from which pilgrims started their journey. 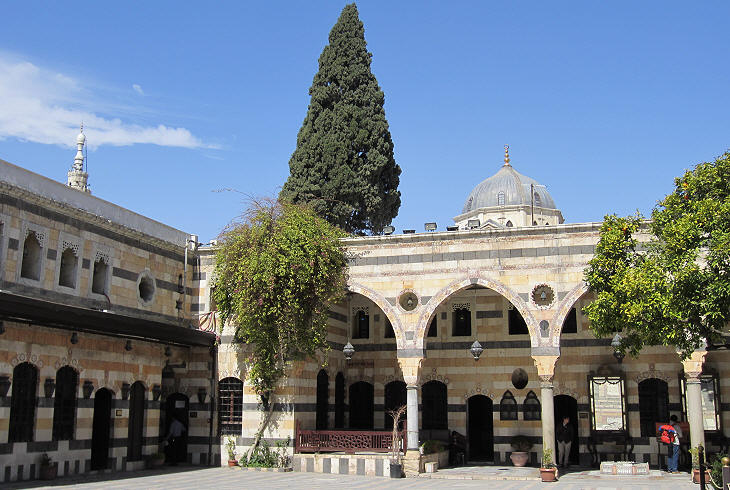 Every year some thirty thousand pilgrims gathered in Damascus to join a caravan led by a senior Ottoman officer; this meant great exposure for the governor of the city who was responsible for the organization of the event; while major grievances led to the immediate replacement of the governor, the effective management of the pilgrimage could grant continuity in the position and even the possibility of passing it to relatives.
Various members of the al-Azem family held the position of governors of Damascus and they amassed a considerable personal fortune; in 1750 As'ad Pacha al-Azem built a large mansion very near the Umayyad Mosque; the Al-Azem had also a residence at Hama. 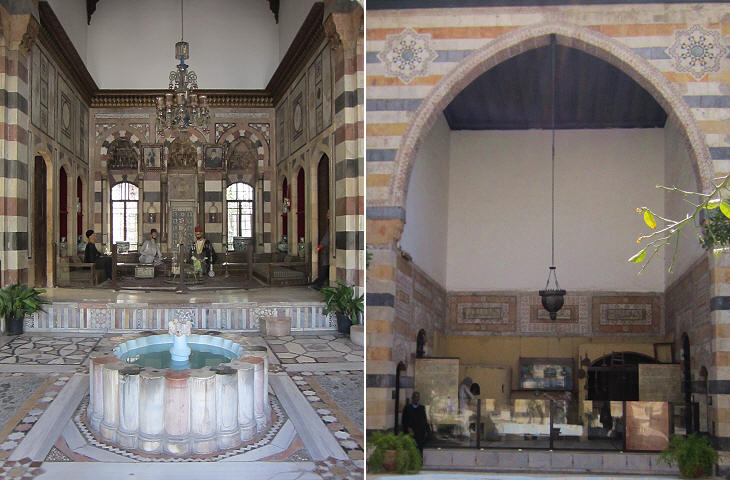 Azem Palace: "iwan" in the haramlik (left) and in the selamlik (right)

Rooms, halls and courtyards were designed so that the haramlik, the private section of the palace, was clearly distinct from the selamlik where the governor met his friends; this approach meant a duplication of facilities, such as the iwan, deep niches north-oriented (their height granted some circulation of air while their positioning kept them in the shade - see the iwan of Tach Kaouli Palace at Khiva in today's Uzbekistan). 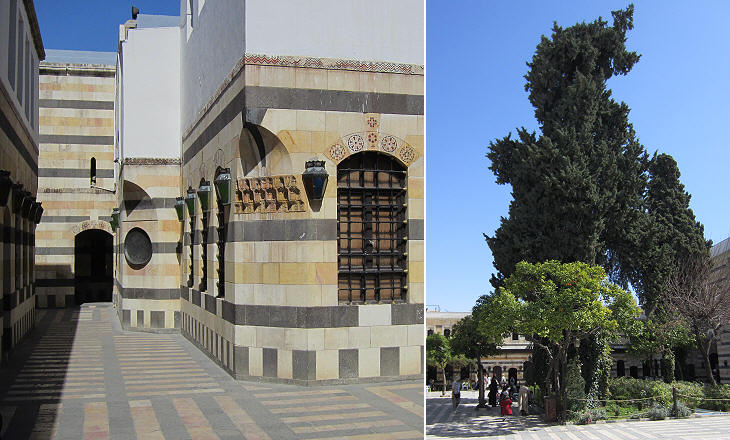 The construction of such a remarkable palace led to some eyebrow-raising and As'ad Pacha was transferred to Aleppo in 1757; before leaving Damascus, he released all criminals from jail in order to ensure his successor had a difficult task in protecting the pilgrims who were actually attacked several times; many of them were killed and their goods plundered; As'ad Pacha hoped to be recalled to Damascus; he was instead strangled by order of the Sultan. 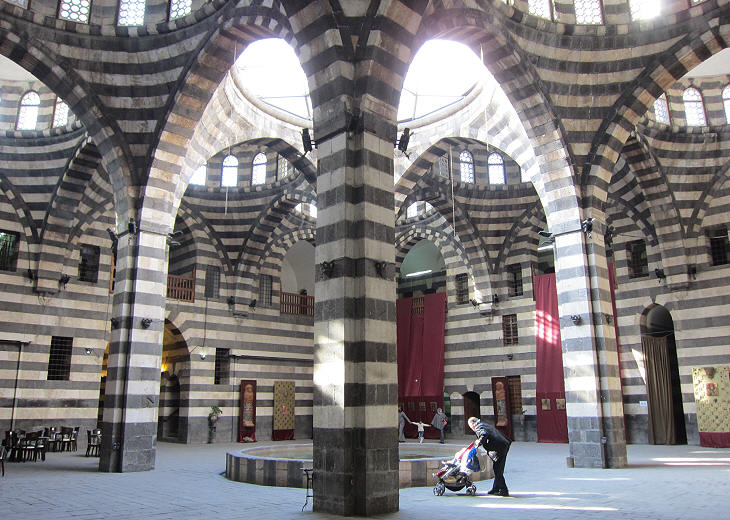 As'ad Pacha al-Azem is also remembered for having built the finest Ottoman khan of Damascus near his palace; unlike the majority of khans (inns for travellers and their merchandise) which are built around an open courtyard, that of this khan is covered by nine domes supported by four pillars. 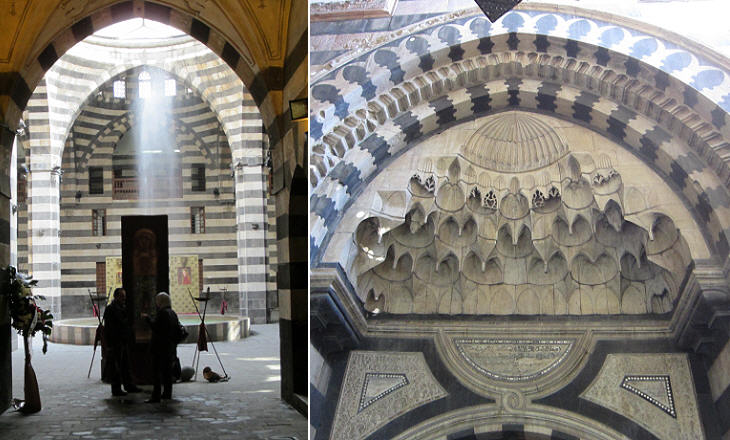 After a long period during which the khan was used for storage, a lengthy restoration has brought back the building to its former elegance. 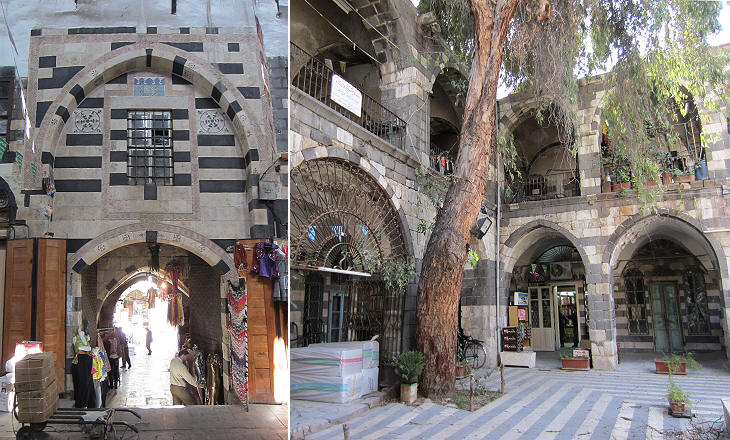 Khan az-Zeit was built before Khan Azem Pacha and its design with an open rectangular courtyard surrounded by a portico (in the past used for stables and warehouses) and a loggia (where the rooms for the travellers were located) is more traditional. It is now part of the market which occupies the western section of the Old Town. 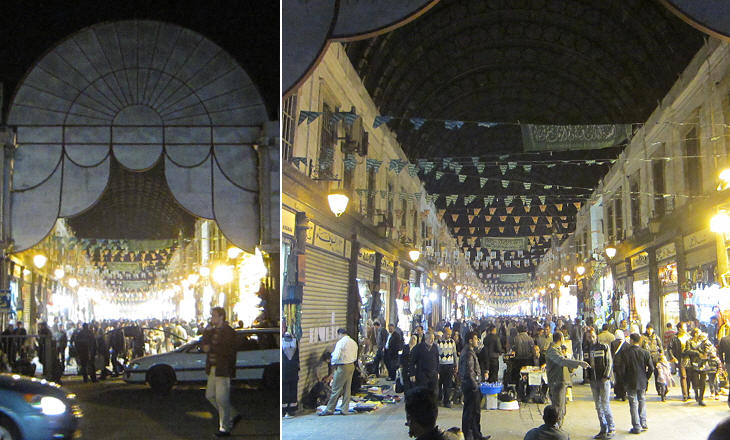 Souq Hamidiye is a late XIXth century covered mall which starts from the western wall and ends at the Umayyad Mosque; it is mentioned as a "must see" by all tourist guidebooks, but it lacks the atmosphere of the souqs of Aleppo.