You may wish to read an introduction to this section and pages on Ostrogothic Ravenna and S. Apollinare in Classe first. 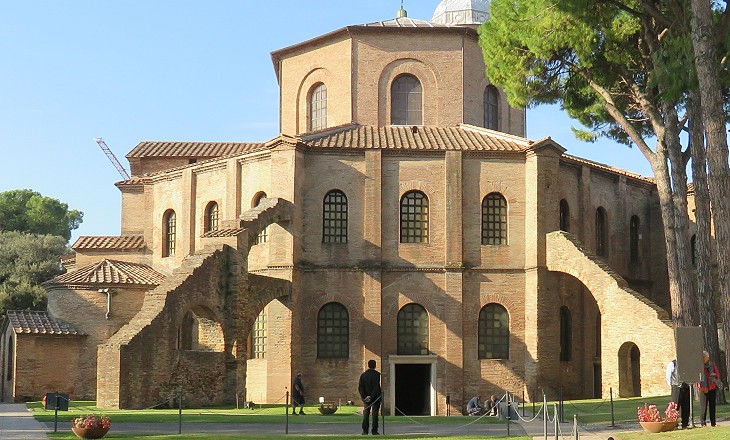 S. Vitale seen from the entrance to the Mausoleum of Galla Placidia

Under Byzantine rule architecture assumed a more decidedly Greek character, and the most remarkable building at this time in Ravenna was the domed church of S. Vitale. It was founded by Bishop Ecclesius who held the see from 524 to 534. In 525 he had been to Constantinople together with Pope John I on a mission from Theodoric, who sent these Catholic prelates to treat with the Emperor Justin for toleration of the Arians in his dominions. (..) S. Sophia was not begun till eight years after the visit of Ecclesius to the capital, but we know there were other domed edifices there. The domed church of SS. Sergius and Bacchus, which Procopius says Justinian built during the reign of his uncle Justin, must have been nearly completed, and the plan has so much in common with that of S. Vitale that it seems tolerably certain Ecclesius followed it to a great extent in his new church at Ravenna. In no other way can we account for the novelty of the plan, which breaks away entirely from the basilican form of preceding churches. The inscriptions state that at the command of the blessed Bishop Ecclesius, Julianus Argentarius (a rich banker) built, adorned, and dedicated it, and the Very Reverend Bishop Maximian consecrated it in 547. (..) Probably the building did not progress very far under the Gothic kings, who were Arians. The completion at all events is due to Justinian and Theodora, who with their attendant courtiers appear in the mosaics of the chancel bringing bowls in their hands containing offerings for the pious work. (..) The construction seems to have required further support, for at some time flying buttresses have been constructed against two of the exterior angles of the octagon.
Thomas Graham Jackson - Byzantine and Romanesque Architecture - 1913 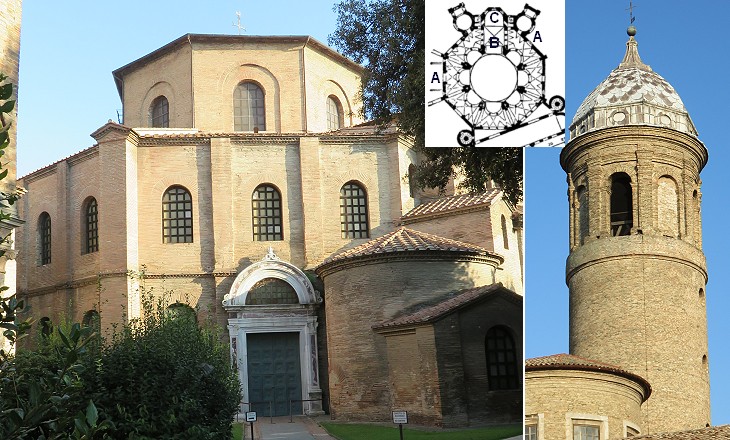 S. Vitale: (left) side with the XVIth century entrance; (right) bell tower, the lower part of which contained stairs allowing women to reach the gallery of the church; (inset) plan of the building: A) entrances; B) main altar; C) choir

S. Vitale is a domed church, but it does not challenge the difficulties which make S. Sophia a masterpiece of construction. Within an octagonal aisle is an octagon 58 ft. in diameter, of which the angles are bridged out into a circle by a kind of squinch to receive the dome. Seven sides of the octagon are broken out into an exedra or semi-circular recess with pillars in two storeys (..). The eighth side at S. Vitale contains the triumphal arch which rises to the full height of both storeys. (..) The dome is not shown externally like those in the east, but is concealed within a drum covered with a pyramidal roof of timber, thus following the fashion of the temple at Spalato and the baptisteries at Ravenna. This plan allows large windows at the base of the dome, which is I think the best lighted dome I have ever seen. T. G. Jackson An unusual aspect of the layout of S. Vitale is that from the two entrances one does not see where the main altar is located. From two of the eight sectors into which the church is divided the faithful cannot see the main altar; from two other sections the main altar is visible, but the choir behind it is not. This may explain why very few Italian churches were built following the model of S. Vitale. Its design is excellent instead for holding processions inside the church similar to an ancient perambulatorium at Pergamum. 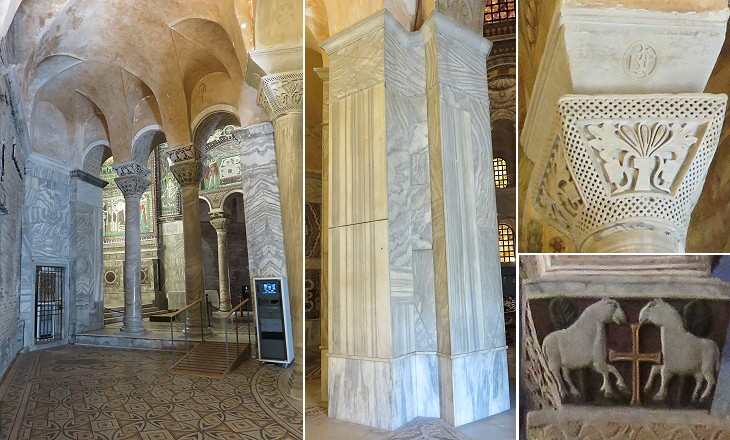 S. Vitale - interior: (left/centre) marble decoration (the image used as background for this page is based on a veined red marble slab; (right-above) capital with "pulvino" bearing the monogram of Bishop Vittore (537-546); (right-below) "pulvino" in the aisle of the main altar

The lower part of the walls is lined with marble slabs, arranged in panels of strongly veined red and white plaques within borders of veined white. The capitals, which all have the pulvino, are thoroughly Byzantine, and in all likelihood were imported from Constantinople. They are of several forms; some of the concave Corinthian outline with acanthus leaves and volutes; some of the plain basket shape either with an Egyptian-like lotus within borders of plaited work, or covered with a network of scrolls. T. G. Jackson
In 1899 the decoration of the walls was brought back to the aspect it had in the VIth century. 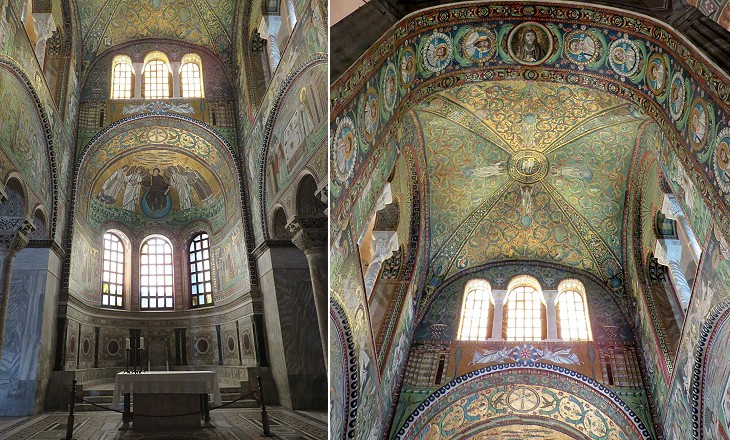 The choir, which interrupts the octagonal two-storeyed aisle surrounding the building, is cross vaulted, and ends square with three lights in the east wall above the apse. (..) The chancel arch is lined with medallions containing busts of saints, scriptural subjects fill the tympana of the side arches, and the vault is covered with scroll-work round a medallion at the crown from which radiate four angelic figures. (..) The choir and apse, and their vaults, with the entrance arch from the central nave are all lined with glass mosaics, of the greatest beauty and importance. It is true they have declined somewhat in excellence of drawing from the standard reached by those of Bishop Neon a century before, but they retain all their splendour of colour, and almost surpass them in interest. For here on the side walls are contemporary portraits of Justinian and Theodora with their attendant suites, Justinian advancing with gifts in their hands for the sacred fabric. T. G. Jackson 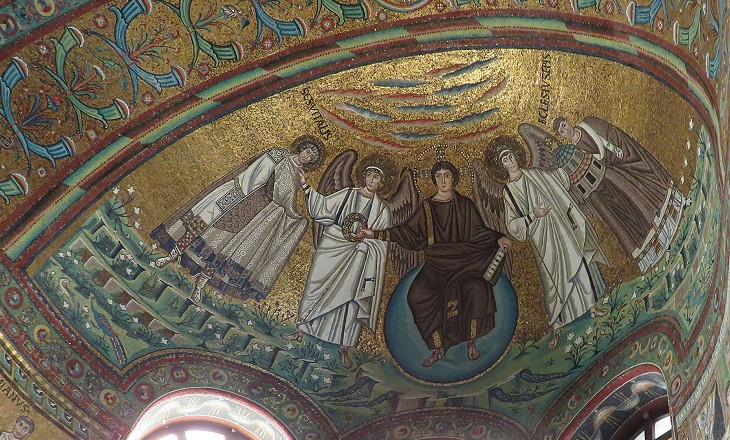 S. Vitale - Apse (you may wish to see an enlargement of Jesus' face in the introductory page)

In the semi-dome of the apse a youthful figure of Christ seated on a cerulean globe, is portrayed between two angels and St. Vitale (left) and Bishop Ecclesius (right) who holds a model of the church. St. Vitalis was a Christian martyr who was tortured and then buried alive when his faith was discovered. A church was dedicated to him in Rome in the early IVth century. In 1601-1603 this church was decorated with impressive frescoes showing his martyrdom. 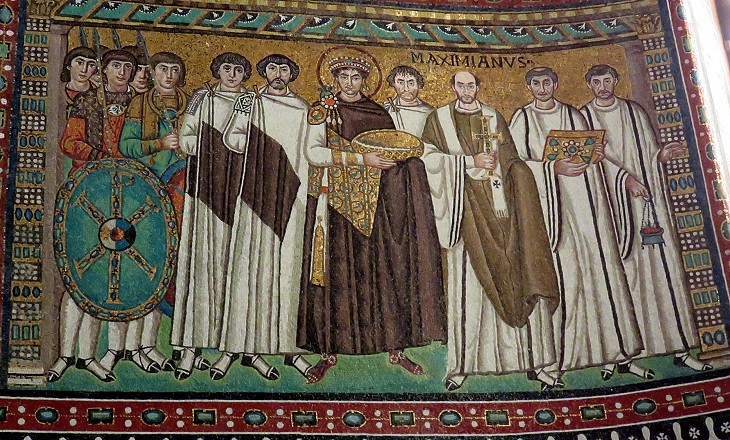 S. Vitale - Apse (you may wish to see an enlargement of Justinian' face in the introductory page)

On the north side of the apse, is Justinian crowned, and with a nimbus (halo), robed in purple and gold, followed by three courtiers and an armed guard, and preceded by Maximian the Bishop with two attendants one bearing a jewelled volume, and the other a censer. T. G. Jackson
In 546 Justinian appointed Maximian, a native of Pola, as Bishop of Ravenna. Justinian never visited Ravenna, but it is generally believed that the portrait at S. Vitale resembles the emperor, whom Maximian knew very well. Consistent with the Roman tradition the faces depicted in the mosaic were portraits and not iconic images. That at S. Vitale is the "official portrait" of Justinian because an equestrian statue of him at Costantinople was destroyed after the city was conquered by the Ottomans in 1453, his portraits on the coins he minted are very poor and other mosaics portraying him were most likely destroyed by the Iconoclasts in the VIIIth century. 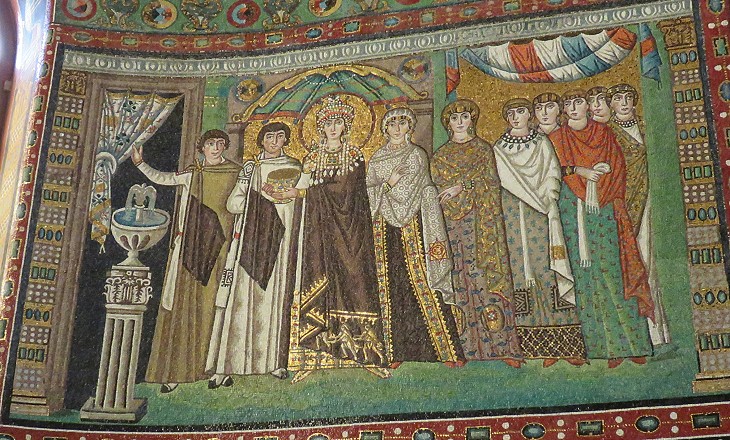 S. Vitale - Apse (you may wish to see an enlargement of Theodora's face in the introductory page)

On the opposite wall is Theodora crowned and with a nimbus, wearing pendants and collars of jewels or pearls, attended by her ladies and a courtier in white, and preceded by a priest who is pushing aside the curtain of a doorway. Embroidered on the border of her robe are three figures in gold advancing with much action and like herself carrying bowls, which recall the figures of the three kings at S. Apollinare. T. G. Jackson
The faces generally lack expression and the bodies depth, but this has not prevented the mosaic from becoming the best known image of the splendour of the Byzantine court and from influencing the works of modern artists, such as Austrian painter Gustav Klimt who visited S. Vitale in 1903 (see his portrait of Adele Bloch-Bauer - it opens in another window).
Both Justinian and Theodora were portrayed with a nimbus; they are considered saints by the Greek Orthodox Church. She died in 548, shortly after the consecration of the church. Justinian died many years later, in 565. He did not remarry. 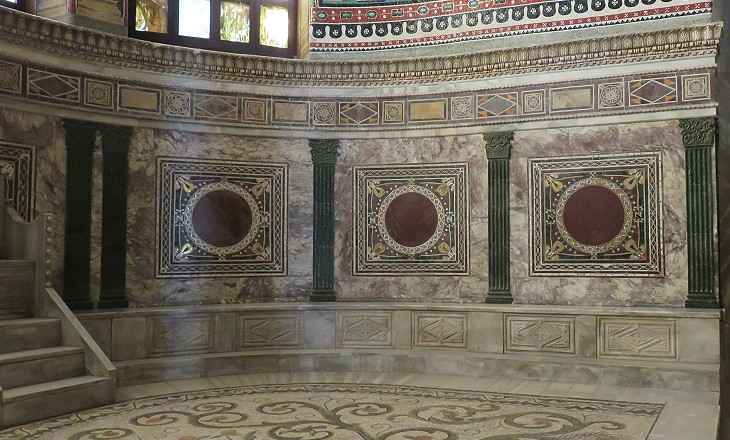 The removal of a wooden lining round the apse has revealed two panels of an inlaid dado of marble and porphyry, one on each side, and they have lately been copied in the remaining spaces. They resemble those at Parenzo, but these are not so fine. Between panel and panel are fluted pilasters of green serpentine with rude capitals, and little if any projection. The marble bench round the apse and the episcopal throne are modern. T. G. Jackson 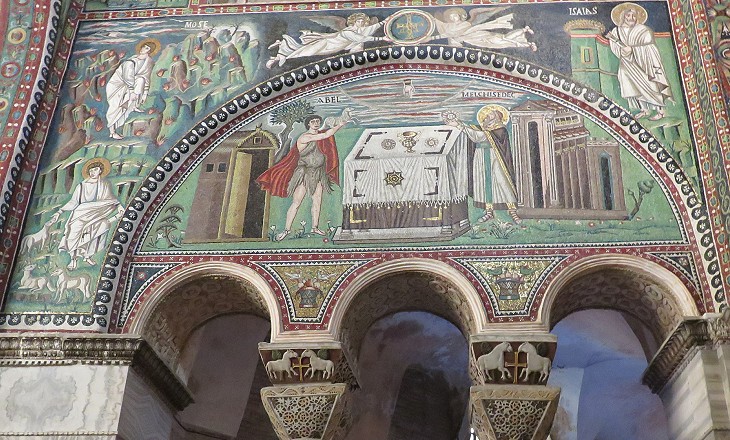 S. Vitale - Mosaic on the wall preceding the choir

S. Vitale was built almost at the same time as S. Apollinare in Classe. While the architectural design of the two churches is entirely different, some subjects such as sheep and the offers by Abel, Melchizedek and Abraham appear in the decoration of both churches.
This mosaic and that on the opposite wall (see below) show a congestion of subjects. This because the maker of the mosaic had to deal with an unusual, not symmetric surface to cover, which he eventually divided into three major sections each having its own subject. The didactic purpose of these mosaics is very clear and it seems a forerunner of the medieval and Renaissance frescoes which decorate so many Italian churches. 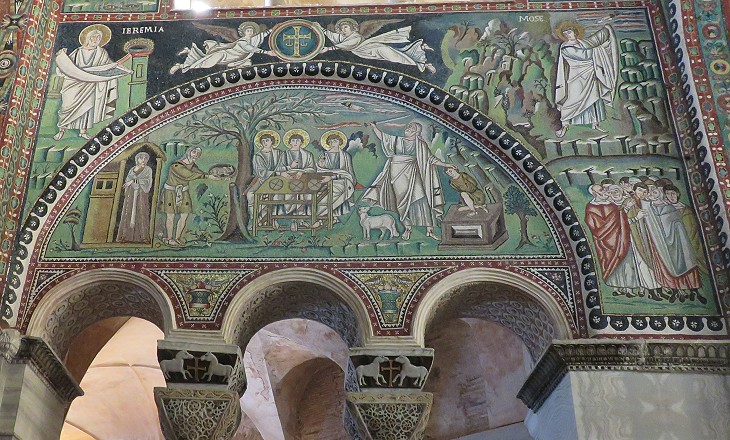 S. Vitale - Mosaic on the wall preceding the choir

Under the great dome sat an artist whom I envied, making at an effective angle a study of the choir and its broken lights, its decorated altar and its incrusted twinkling walls. The picture (..) won't tell the owner, unless he has been there, in just what a soundless, mouldering, out-of-the-way corner of old Italy it was painted.
Henry James - Italian Hours - 1909 - piece written in 1873. 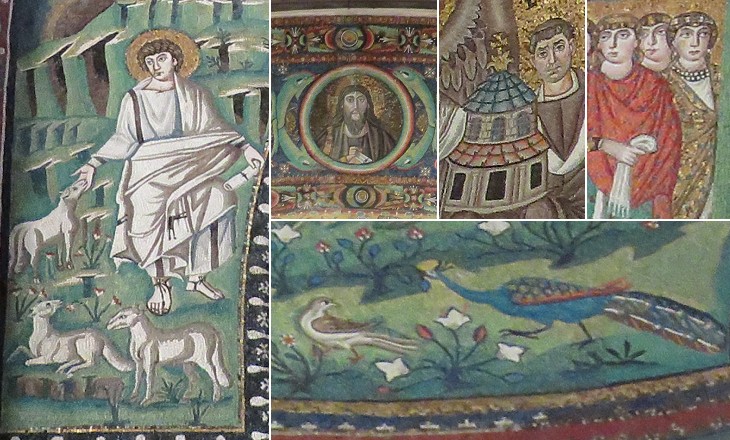 When Bishop Maximian consecrated S. Vitale in 547, the war with the Ostrogoths was still going on, but most likely he was confident it would have soon ended with the victory of the Byzantines and Ravenna would have been the rich capital of Italy. But this rosy picture did not materialize. A plague which had begun in Constantinople spread to Italy where the Ostrogoths managed to resist until 553. The Byzantines had no resources to maintain a strong army in Italy and in 568 they were unable to oppose the Longobard invasion of most of the country. This explains why no other large churches were built at Ravenna during the Byzantine rule which lasted until 740. The present pavement of opus Alexandrinum (aka Cosmati work) has bits of Renaissance patterns in it and was raised and relaid in 1539. Justinian's pavement is partly exposed in the aisle some three feet down, and below that is a still older mosaic now under water which seems to show there was an earlier church here in the 5th century. T. G. Jackson
The ancient floor mosaics of S. Vitale resemble those at Monastero della Beligna in Aquileia and they were not made with the same care used for those in the choir. 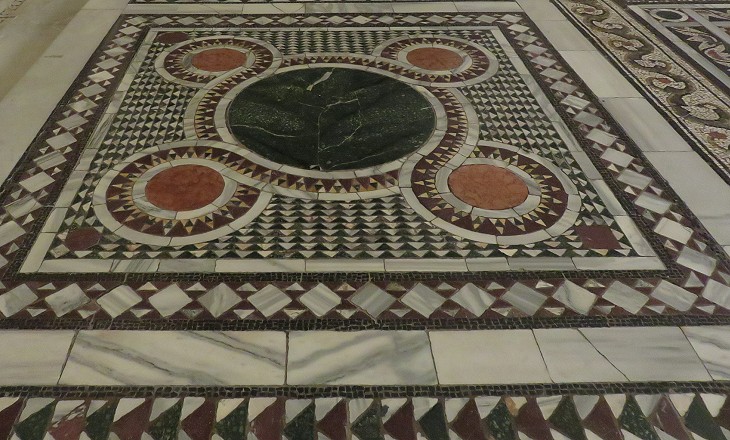 Although Ravenna declined after the VIIIth century, its main churches, unlike those at Classe, were never abandoned and they underwent repairs and modifications to adapt them to new circumstances and needs. In the Xth century S. Vitale became part of a Benedictine monastery, which owned many estates outside Ravenna and was able to pay for a new floor. S. Vitale - XVIth century floor mosaic with the design of a labyrinth

Of all the cities in Romanian lands,
The chief, and most renown'd, Ravenna stands;
Adorn'd in ancient times with arms and arts,
And rich inhabitants, with generous hearts.

John Dryden (1631-1700) - Theodore and Honoria, an adaptation of the "Story of Nastagio degli Onesti" from Boccacio's Decameron.