You may wish to read an introduction to this section or two pages on Roman Pola first. 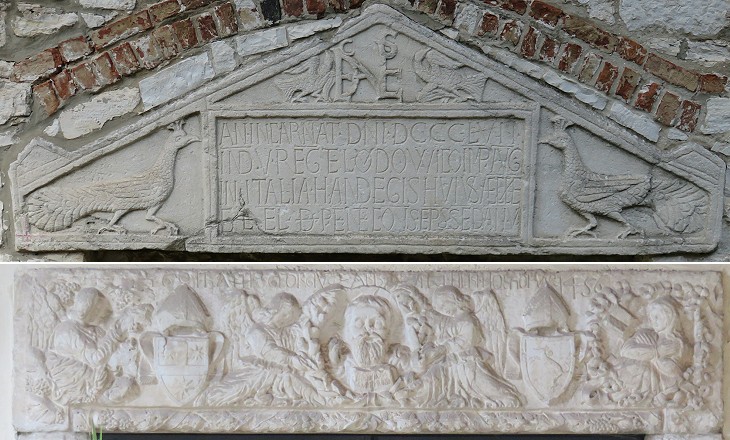 Cathedral: (above) gravestone of Bishop Andegiso; (below) XVth century Venetian-style lintel of the side portal (from the demolished Benedictine abbey of St. Michael)

The Duomo of Pola, according to the inscription on a stone which was once no doubt the tympanum of a door, and is now fixed in the north aisle wall, was built by Bishop Handegis in 857 (..). Although, however, the original ground-plan may have been more or less well preserved, and the original columns and some of the capitals used again in later work, there is little else left of the building of Bishop Handegis.
Sir Thomas Graham Jackson - Dalmatia, the Quarnero and Istria - 1887
The inscription is now assumed to be the gravestone of Bishop Handegis and having no reference to the construction of the church. It mentions the suzerainty of Louis II, King of Italy and Holy Roman Emperor, great-granchild of Charlemagne, over Pola. In 1000 however, the inhabitants of the town had to ask the Republic of Venice to protect them against raids by the Slavs and by the Narentine pirates (the latter had their bases at the mouth of the River Neretva in southern Dalmatia). This event marked the beginning of a bond which lasted until 1797. 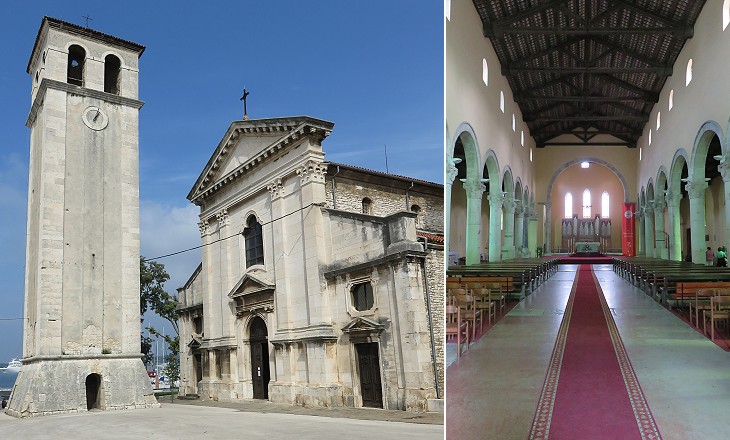 Pola became a bishopric see in the VIth century. It initially reported to the Archbishops of Ravenna and later on to the Patriarchs of Aquileia. The exterior of the Cathedral and the bell tower are the result of a redesign which began in 1707 and was completed in the following century. A baptistery rose in front of the façade of the cathedral. It was pulled down in ca 1850. 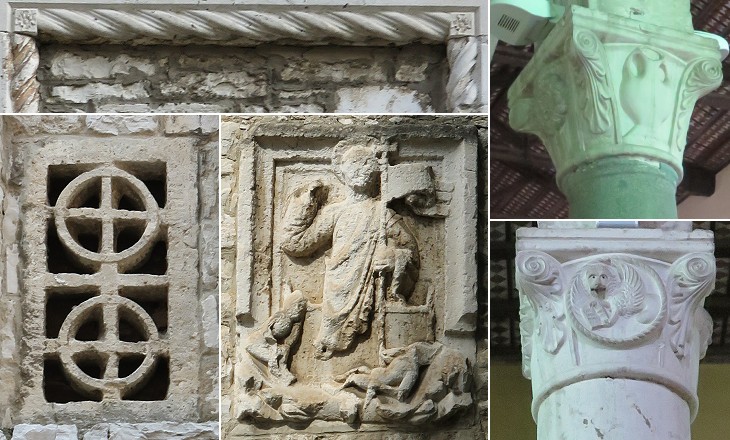 Cathedral: (left) reliefs and decorations on the outside walls, including a very old window; (right) capitals of the Venetian period

The protection of Venice was not without a cost. The citizens of Pola had to accept limits on their trading and when they tried not to comply with these restrictions Venice did not hesitate to occupy the town. In addition Pola became a target for the enemies of Venice. In 1379 the Genoese, during the War of Chioggia, defeated the Venetian fleet off the harbour of Pola and sacked and burnt the town. The bronze gates of the Cathedral were carried off to Genoa. 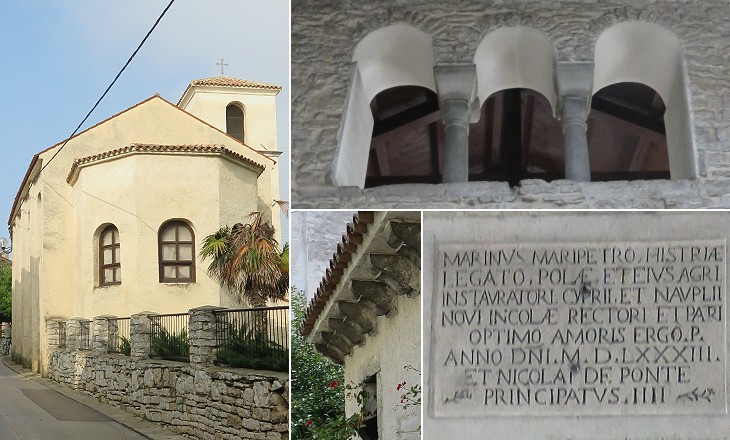 Similar to nearby Parenzo, Pola experienced a decrease of its population because of pestilences, in particular that of 1527. In addition malaria spread along its coastline and in summer almost all the inhabitants moved inland to avoid its effects. In 1583 the Venetian government assigned S. Caterina, a VIth century church, to Greek Orthodox refugees from Cyprus and Nauplia who dedicated it to St. Nicholas. Today it is the church of the Serbian community. Notwithstanding Venetian efforts to repopulate the town, Pola had just 300 inhabitants after the pestilence of 1630-1631, the last of a long series. 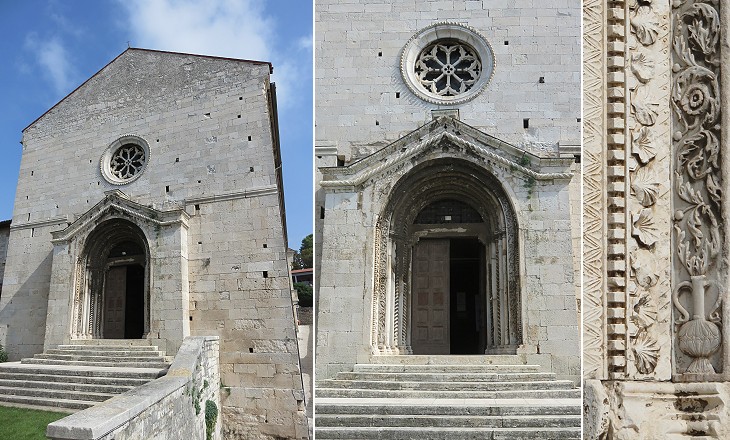 (A word might perhaps be spent) in favour of the church and convent of S. Francesco, but they are both now converted into military magazines, and I was unable for want of time to obtain the necessary permission to visit them. The cloister is said to be fine, but so far as I could gather from the description not of an early period. The exterior of the church is all that can be seen by the ordinary visitor. This is in the Italian Gothic style. T. G. Jackson 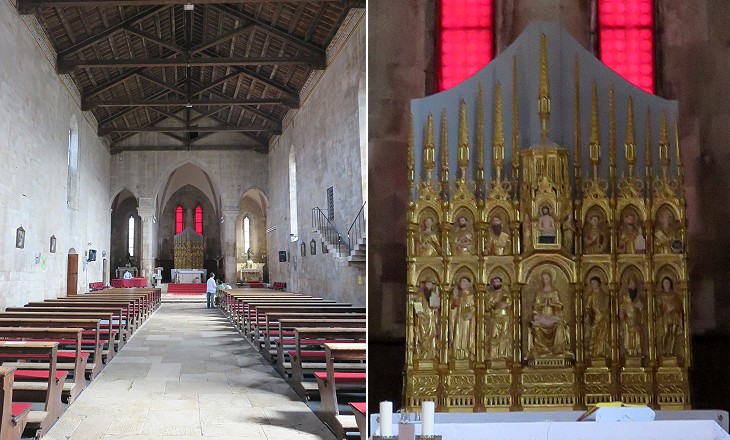 In 1927 S. Francesco returned to be a church, but the years during which it was used as a warehouse have left a mark on its very bare interior. The fine polyptych is original because it had been moved to the Cathedral in 1808 when S. Francesco was deconsecrated by the French. During repairs made after WWII an ancient mosaic was found, so that it appears the church stands on a previous building. 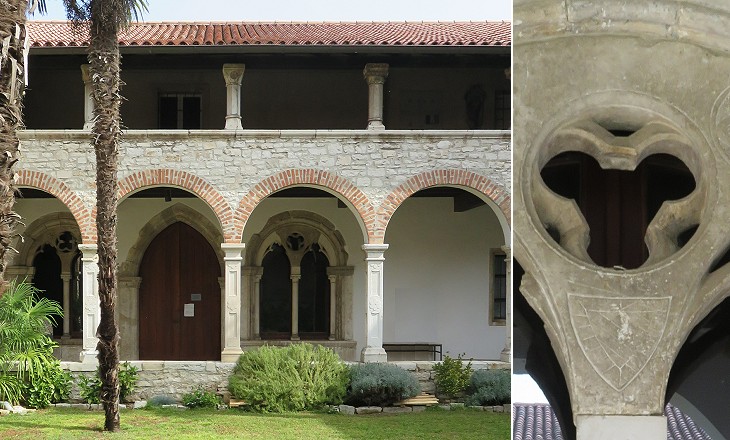 Pola (..) was torn by internal discord; and in 1271 the entire clan of the Sergii, or Castropoli, who led the feudal (Anti-Venetian) party, were massacred by their opponents of the popular faction, with the exception of one boy in whom the family survived to return afterwards to power (..). S. Francesco is probably the church which together with the convent was rebuilt (..) by the grateful survivor of the Sergii or Castropoli, who owed his preservation from the massacre which swept away the whole of his family to the shelter afforded him within the walls of the Franciscan brotherhood. T. G. Jackson 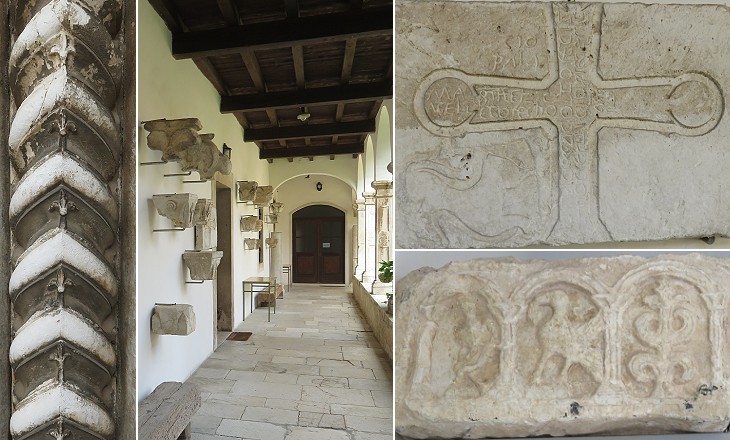 S. Francesco: (left) detail of the portal; (centre/right) exhibits in the cloister

Today the premises of S. Francesco are used as a small museum: a garden near the entrance houses some Venetian inscriptions and sarcophagi (the image used as background for this page shows a relief on a sarcophagus), a series of medieval reliefs are displayed in the cloister and Roman funerary inscriptions and capitals can be seen in another garden (or rather a parking lot). 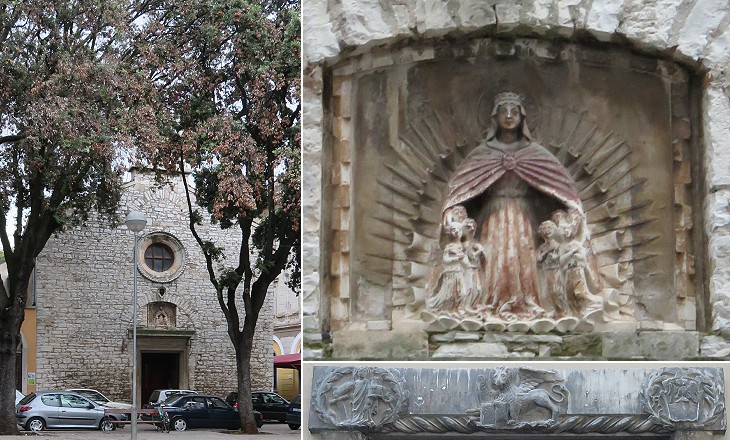 (left) Madonna della Misericordia (Our Lady of Mercy); (right-above) relief above the main entrance; (right-below) lintel of the side entrance bearing the Winged Lion of Venice

The church and the adjoining (lost) Augustinian convent were founded in the XVth church. It is located very near Arco dei Sergii. It was one of the few churches still open in 1828 when the bishopric see of Pola was united with that of Parenzo.