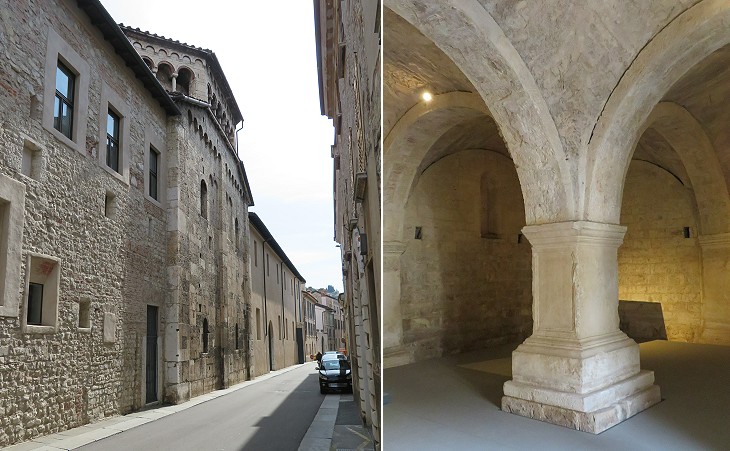 (left) The Nunnery of S. Giulia with the Romanesque chapel of S. Maria in Solario along a "decumanus", an east-west street of the Roman town; (right) ancient altar which was used as a pillar at S. Maria del Solario

Sta. Julia. This (Benedictine) convent is one of the latest works of the Lombard dynasty. It was (..) founded and built by Desiderius, the last Lombard king. The foundation was, at first, in honour of the Saviour; but Ansa, the wife of Desiderius, having imported from Corsica the body of the African virgin, Sta. Julia, and enriched the convent with so precious a gift, the name of the saint finally reigned alone. Anselperga, a daughter of Desiderius, was the first abbess of the convent. The convent has been turned into a barrack.
John Murray - Handbook for Travellers in Northern Italy - 1852
The complex occupies a large area in the north-eastern section of the ancient town, where some Roman houses were discovered in 1967. 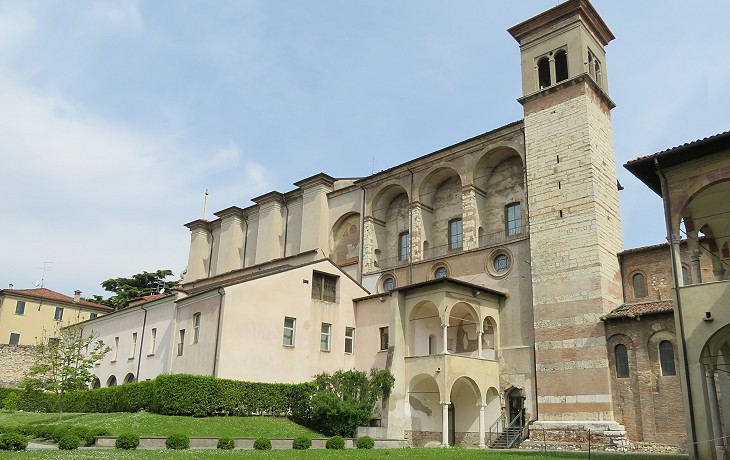 Former church of S. Salvatore, the oldest part is to the right of the bell tower

Church of San Salvatore, annexed to the monastery of Sta. Giulia. (..) It stands at one angle of the court, in a very perfect state, and (..) is a pleasing specimen of the Lombard style. Murray
The façade of the church was pulled down when the building was enlarged to make room for the choir of the nuns; the bell tower was built in the XIVth century. Early XVIth century frescoes in the choir of the nuns

The nunnery was confiscated by the French in 1797; during the more than 1000 years of its history it was modified and enriched with new buildings and works of art. In 1999 the City of Brescia inaugurated a museum in the premises of the former nunnery; additions to the original buildings which were similar to those of many other churches of Brescia were removed, while other parts which had a specific artistic value were retained. The collections of the museum cover the whole history of Brescia including works of art, especially paintings, of the long Venetian tenure of the town (1426-1797). 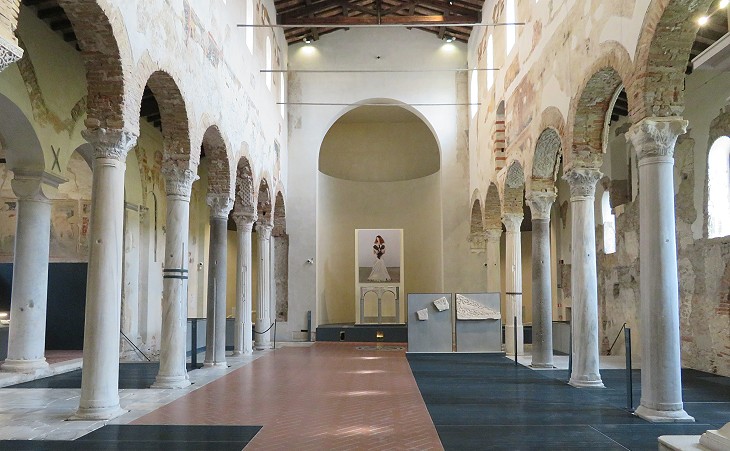 The Church of San Salvatore has three naves and a transept (!) with three apses. The naves are separated by arcades supported by columns, some of which were salvaged from Byzantine monuments. Stucco reliefs and paintings covered the ensemble and the crypt, some elements of which remain. Marble tiling covers several tombs of the elite, including that of Ansa (the floor was paved with parts of Roman sarcophagi) (..) The church, which is very well preserved, probably dates from the 8th century; the crypt is from a later period. The Baroque additions were removed to reveal the medieval structures.
From the UNESCO synthesis of the universal value of the Nunnery of S. Giulia which in 2011 was included in the World Heritage List with other Longobard monuments in Italy, e.g. those at Cividale and Benevento.

S. Salvatore: columns, capitals (some of which are Byzantine) and decoration of the arches

The Longobards invaded Italy in 568 and they ruled over most of the country for more than two centuries. Unlike the Visigoths who established trade and military relations with the Roman Empire before conquering parts of it, the Longobards were not acquainted with the Roman culture; they were actually pushed from Hungary towards Italy by the Avars, a nomadic people from Central Asia who had a particularly destructive effect on the territories they conquered; the main positive contribution of the Longobards to the history of Italy is that they checked Avar invasions in 610 and 633.
In Spain the Visigoths developed an original type of pillar and most likely the first horseshoe arches. S. Salvatore is an interesting building, but its design and decoration are entirely based on those which were developed at Ravenna in the Vth and VIth centuries. 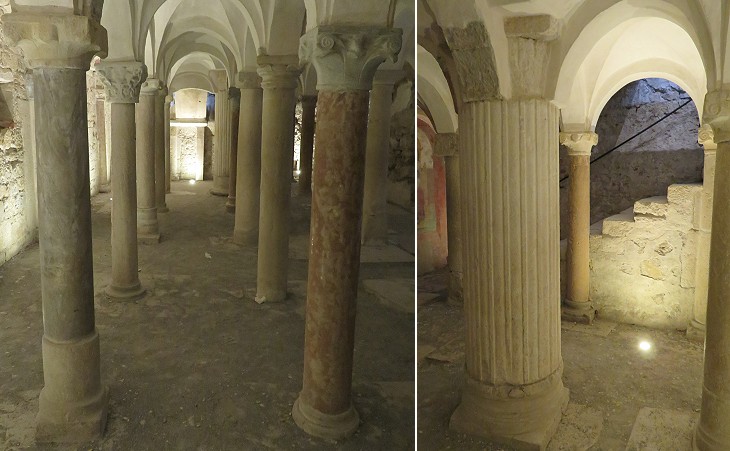 The crypt housed the relics of St. Giulia and other martyrs; in origin it had only three naves, but in the XIIth century other columns were added to form nine naves, in order to ensure it could support the upper part of the church. Many columns were taken from Roman buildings and they can be easily detected because of their stone/marble or because they are shorter or wider than the others. 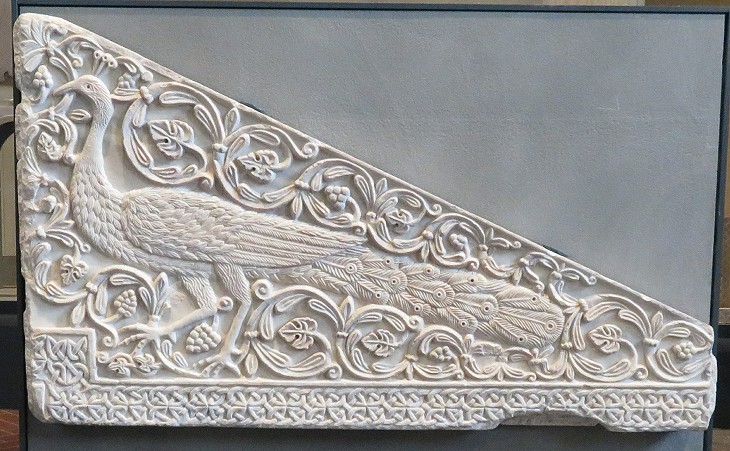 Relief from an ambo (an early form of pulpit) at S. Salvatore

The very fine execution of this relief strikes all visitors. The curators of the museum say that it reaches an unexpected peak of Longobard art, because there is no evidence at Brescia of other high-quality Longobard reliefs or sculptures. It makes more sense to assume that the relief was made at Constantinople (see the excellency of Byzantine sculptors in exhibits at the Archaeological Museum of Istanbul) which we know supplied the churches of Rome with marble decorations, e.g. at S. Clemente. It is also possible that the relief was looted at Ravenna which the Longobards conquered in 751 (see a similar relief from S. Apollinare Nuovo and the ambo of the Cathedral).
Lombardia, the region comprising Brescia, is named after the Longobards and some of the local authorities, especially those belonging to a political party opposing the unity of Italy, tend to emphasize the contribution which the Longobards made to the artistic development of the country. 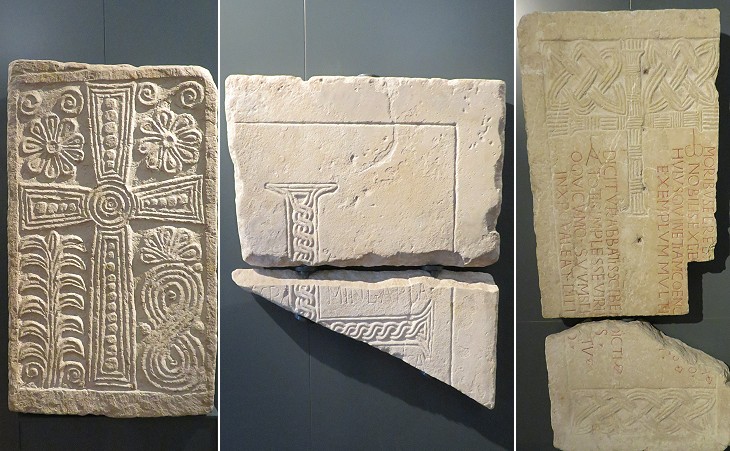 Longobard tombstones which were found at S. Giulia: the central one bears the name "ER MINGARDA" which was given in the XVIth century to a daughter of Desiderius who married Charlemagne and was eventually repudiated; according to a Romantic tradition she was forced to retire to a nunnery; today we know that her real name was Desiderata, so the nun buried at S. Giulia was not the unfortunate princess

One apartment is devoted to medieval antiquities: those of the Lombard era are interesting. (..) Fragments covered with runic knots, some apparently slabs and doorjambs, one the foot of a cross; a runic cross bisecting an epitaph in Roman characters. These remains appear peculiar to the N. of Italy. Murray
Crux gemmata, a large cross studded with jewels, was depicted in many churches as an alternative way of portraying Jesus; in particular the Longobards were aware of the crux gemmata in the apse mosaic of S. Apollinare in Classe. Decorated crosses were used to embellish some of the tombstones at S. Giulia. 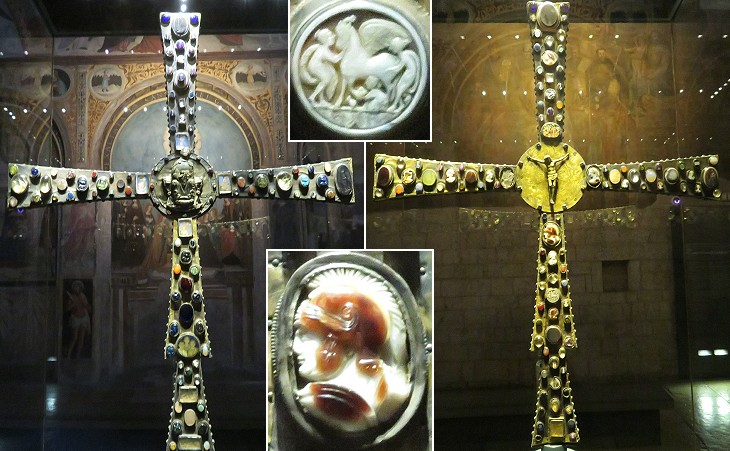 "Cross of Desiderius": (left) side with an emperor on his throne; (right) side with a Crucifix; (insets) two Roman cameos, one of which depicts Pegasus and Three Muses; see a Roman gold glass medallion which decorates the lower part of the cross

According to tradition King Desiderius gave this stunning crux gemmata to the nunnery, but art historians agree that it was made in the IXth century. Some of the cameos and gems which embellish it were most likely looted at Ravenna; other decorations were added in the following centuries including the Crucifix. The overall purpose of the cross was to establish an association between the temporal power of the Emperor and the spiritual power of Jesus, similar to what can be said also for the Cross of Lothair at Aachen. 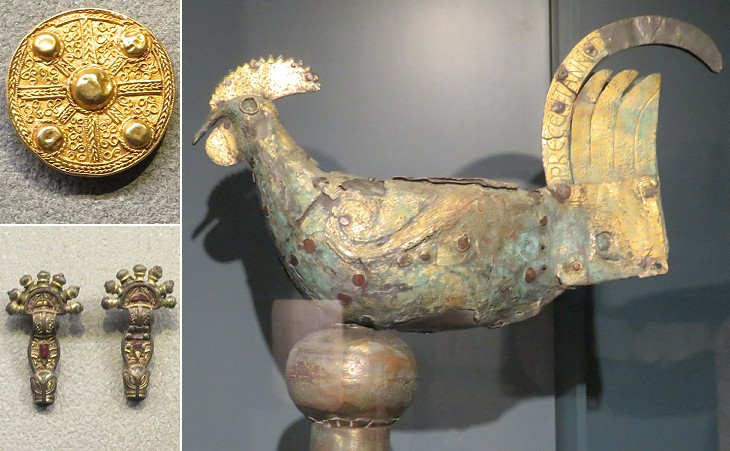 The Longobards, similar to other invaders of the Roman Empire, e.g. the Saxons, the Visigoths and the Franks (see some exhibits at Tournai) developed jewels of a novel design; also their metalworking departed from classical patterns. The image used as background for this page shows a monogram on a golden Longobard coin; the use of monograms was typical of Byzantine emperors. XIIth century Romanesque capitals from the crypt of S. Salvatore which depict scenes of hunt, the martyrdom of St. Pimeneus (an almost unknown saint who was thrown into the River Tiber) and symbols of the Four Evangelists (see the Romanesque decoration of S. Zeno at Verona)