- Visigothic and Moorish Merida
(left - Mosaic at Italica; right - decoration at the Alcazar of Seville) 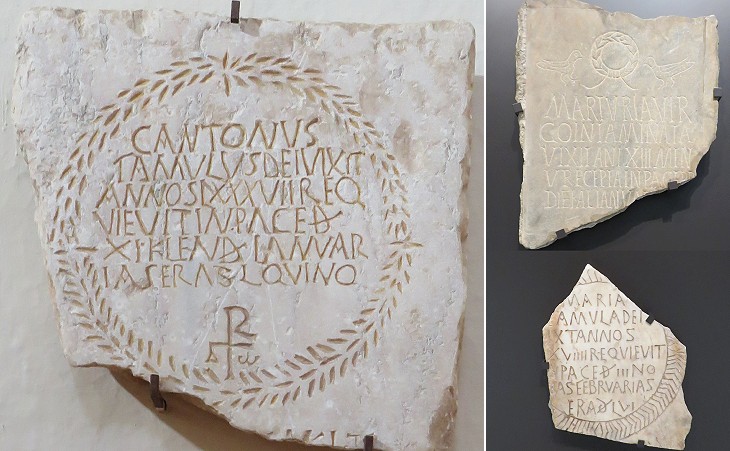 The ancient Romans dated the years after the names of the two consuls in charge. When the importance of these magistrates waned, the years were linked to the reign of the Emperors (and in Papal Rome to that of the Popes). The dating from ab urbe condita, the foundation of Rome (year 753 BC), was rarely used. In some provinces e.g. Syria the years were counted from the Roman conquest. In Spain this usage was officially endorsed in the early VIth century and the years were counted from the full conquest of the country by the Romans which was fixed in the year 38 BC (Era Hispanica). The new dating system symbolized the detachment of the Visigothic Kingdom of Spain from the allegiance to the Roman Emperor of Constantinople. The Visigoths, after having sacked Rome in 410, settled in southern France and eventually they moved south of the Pyrenees. They established a stable rule which gradually covered the whole of Spain and Portugal. 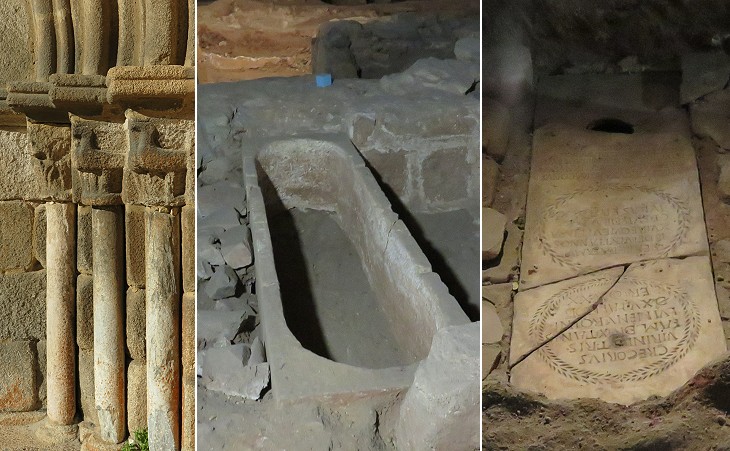 Basilica de Santa Eulalia: (left) detail of the portal; (centre) sarcophagus in the crypt; (right) triple gravestone in the crypt (years 492, 583 and 604 EH)

The adjoining church, dedicated to Santa Eulalia, is said to be of the 4th century: observe the Gothic portal and singular capitals of pillars. (..) Eulalia, born here in 292, was one of the earliest female martyrs of Spain. (..) She was put to death when quite a child, but her miracles are worthy of a grown-up saint; for in the year 453, according to San Isidoro, Theodoricus the Goth (Theodoric II, King of the Visigoths) was deterred from plundering her city. (..) Santa Eulalia failed in our times, alas! when Merida was so often sacked by the invaders. The real Goths used Emerita more kindly. Thus Sala, Duke of Toledo, repaired the Roman bridge in 686, at the request of Zenon the bishop. (..) The town remained purely Roman; and such was its solid magnificence, and so unlike Oriental filigree, that Musa and the Moors who came to attack it, exclaimed, "All the world must have been called together to build such a city".
Richard Ford - A Handbook for Travellers in Spain - 1855 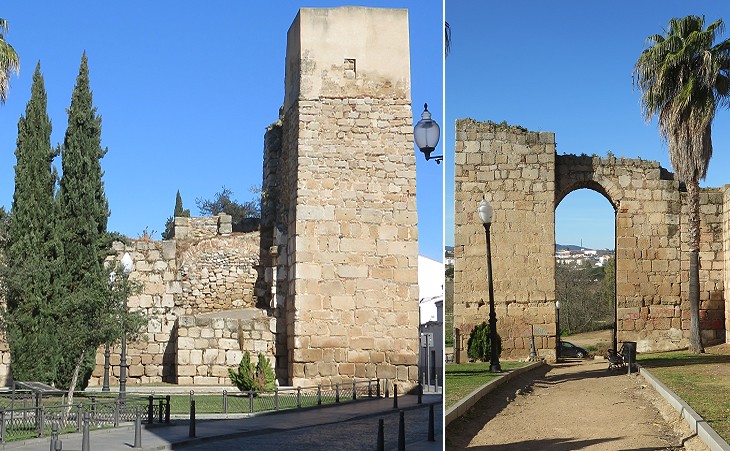 Walls of the Alcazaba (fortress)

Merida resisted the infidel, because the inhabitants, seeing the white hairs of Musa, said he never could live to take it. Thereupon he dyed his locks, and appeared to them as a youth. Terrified at this miracle, the Emeritans surrendered Oct. 23, 715, on fair terms, and they retained their temples, creed, and bishops, for the Moors observed a good faith, never afterwards shown to them. (..) Recrossing the bridge to the r. is the castle, built by the Romans, and added to by the Moors: afterwards it became the episcopal palace, then that of the Knights Templars. In 1305, at their suppression, it was granted to the order of Santiago, whose Provisor resided in this frontier outpost. This edifice was gutted and ruined by the French. Ford 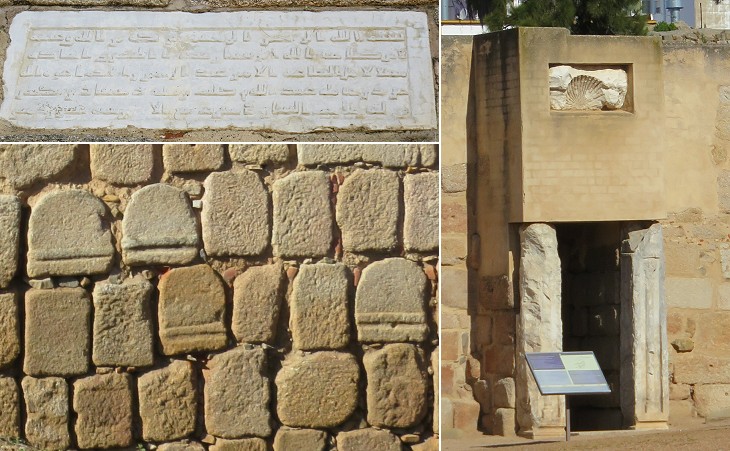 Alcazaba: (left-above) inscription (original at the Visigothic Museum) stating that the fortress was built in 835 by order of Abd ar-Rahman II , Emir of Cordoba; (left-below) wall with stones from ancient buildings and funerary urns; (right) access to the cistern with ancient materials

The archiepiscopal see of Merida was removed to Compostella by pope Calistus II, under king Alphonso VII., whilst this town was in the possession of the Moors. When retaken by Alphonso IX. he gave it to the military, order of St. James, who provided for its government, ecclesiastical, military, and civil; it still belongs to this order.
Alexandre de Laborde - A View of Spain - translated into English for Longman, Hurst, etc. 1809
The gateway near the river has a marble tablet with an Arabic inscription. In the centre of the enclosure is a square tank, and a descent to some ancient baths. Ford
Although Ford credited the Moors who conquered Merida with having fairly treated its Christian inhabitants, the latter repeatedly revolted against the new rulers and the fortress was built to establish the Emir's firm control over the town. At the same time the ancient walls of Merida were demolished so that the rebels could not use them. The Christian population gradually dwindled and in 1119 the rights of the Archdiocese of Merida were transferred to that of Santiago de Compostela, at the time the capital of Galicia, a Christian kingdom in northern Spain. 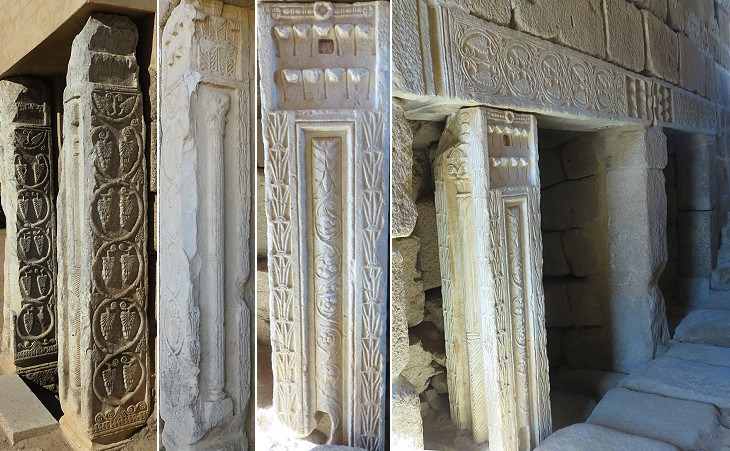 The staircase is ornamented with Corinthian pillars and friezes, of inferior Roman sculpture. Ford
The Visigoths were peacefully admitted in the territory of the Roman Empire (learn why and what happened next). They settled in France and Spain with the consent of the Roman Emperors of the time. During their rule in Spain they embellished their monuments with an unusual type of pillar which imitated a Corinthian column and was often decorated with reliefs depicting bunches of grapes. 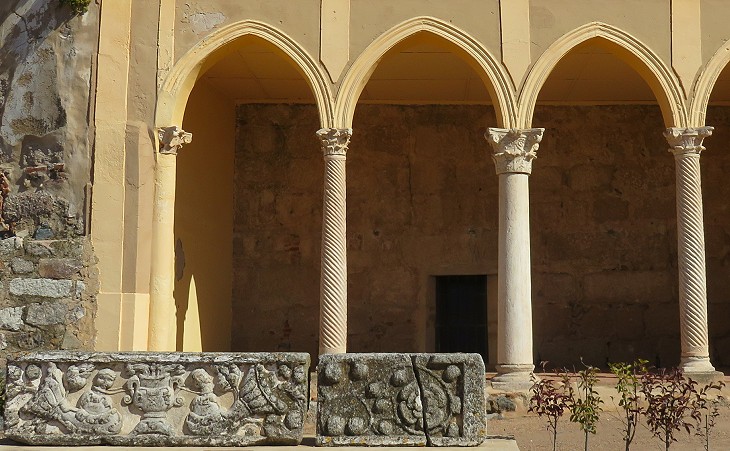 There are now only the remains of a temple, and a court of granite pillars. (..) The town was taken from the Moors, Nov. 19, 1229, (or early 1230) by Alonso el Sabio: from that day province and city date their decline; and now this locality, which under Roman and Moor was "Urbe potens, populis locuples," (Powerful city with rich inhabitants) has under the sway of the Spaniard become poor and almost depopulated. Ford 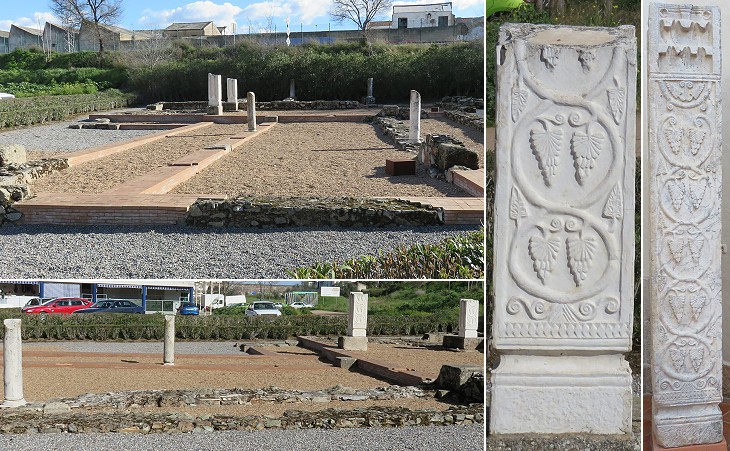 Saint Masona was Archbishop of Merida in 571-605 and is known for having promoted the conversion of the Arian Visigoths to the Catholic creed in 589. He promoted the construction of a hostel/hospital for the pilgrims who visited the tomb of Saint Eulalia. The building was mentioned in Vitas SS. Patrum Emeretensium, a VIIth century biography of the bishops and members of the clergy of Merida, but its location was identified only in 1989, when chance excavations led to finding some of its marble pillars. 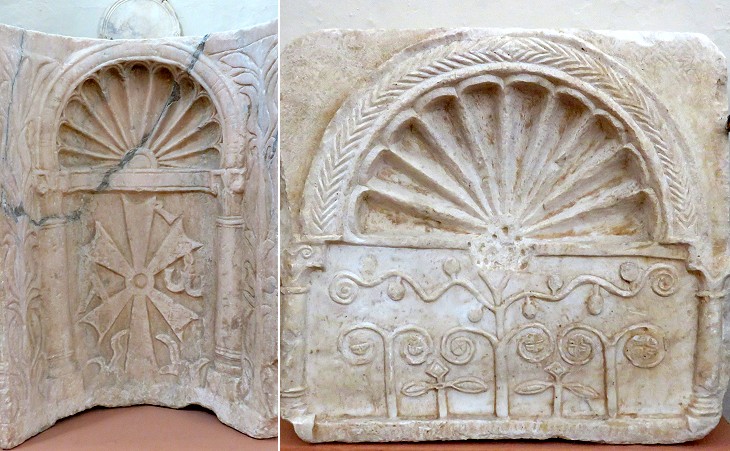 Visigothic Museum of Merida: (left) a Chi-Rho (a Christogram - it shows also Alpha and Omega, another reference to Christ); see similar ones at Cordoba and Toledo; (right) a decorated niche; the image used as background for this page shows another relief at this museum

Move to Introduction and City Centre or Bridges, Aqueducts and Baths or Theatre, Amphitheatre and Circus or Other Roman Monuments and Exhibits from the Museums.