- Tarragona: Introduction: Walls and Fora
(left - Mosaic at Italica; right - decoration at the Alcazar of Seville)

As we descended the hill of Bara to the beach, Tarragona presented itself to our view, like a ruined fortress, on a round point projecting into the sea. A little further on we turned off the road into a wood of pines and shrubs to visit a monument which tradition has named the tomb of the Scipios. (..) From the heavy sands of the sea-shore, where a great many fishermen were hauling in their nets, we ascended the naked rock of Tarragona.
Henry Swinburne - Travels through Spain in the Years 1775 and 1776 in which several monuments of Roman and Moorish architecture are illustrated
Tarragona rising above the sea, on a limestone rock some 760 feet high, was selected by the Phoenicians as a maritime settlement, and called Tarcaon, which Bochart interprets, a "citadel"; and such ever has been, and still is, the appearance and character of this "Arce potens Tarraco". Conveniently situated for communication with Rome, this strong point was made the winter residence of the Praetor.
Richard Ford - A Handbook for Travellers in Spain - 1855 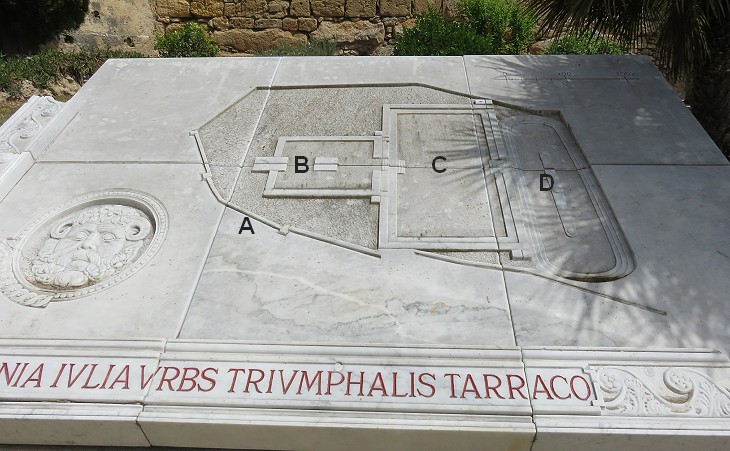 Simplified plan of the Upper Roman Town: A) Walls; B) Temple to Augustus/Cathedral; C) Provincial Forum; D) Circus. In the left lower corner there is a relief portraying Jupiter Ammon, a small scale copy of one at the Archaeological Museum of Tarragona and below the full Latin name of the town: (COLO)NIA etc. as indicated in the pedestal of a statue of the early IInd century AD

Tarraco is remarkable for its singular conception within Roman planning: the town plan was adapted to the configuration of the land by means of a series of artificial terraces, which can be seen around the provincial forum as well as in the residential area of the Roman city. The distribution reveals an upper part, which dominates the whole city and is devoted to representation, part provincial officialdom and part recreational. Meanwhile, following the natural contours of the ground, the residential city with its colony forum stretches out to the sea and the port. (..) This large group of buildings determined the layout of the existing old town, where most of the architectural elements survive. It was a large complex spread over three terraces used for high-level political purposes and to bring the communities of Hispania Citerior into the Roman Empire, as shown by the iconography of sculptural and decorative finds.
From the criteria endorsing the 2000 inclusion of the Archaeological Ensemble of Tarraco in the UNESCO World Heritage List. 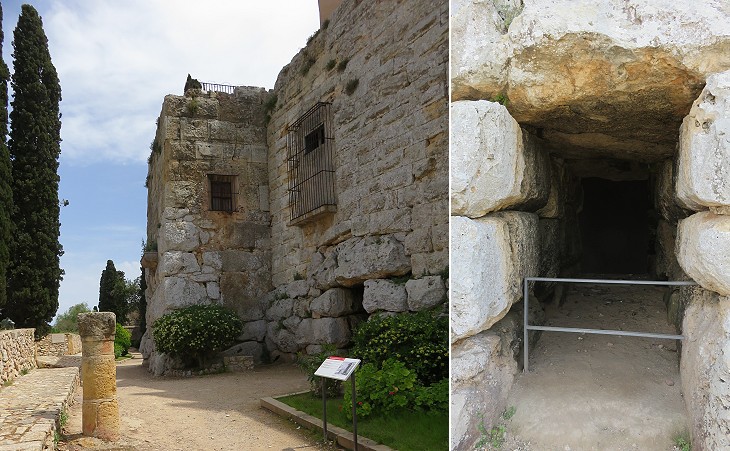 The defensive system of walls of Tarraco is one of the earliest examples of Roman military engineering on the Iberian Peninsula and the most important symbol of the town, defining its form from antiquity until the 19th century. UNESCO
The upper town is girdled with ramparts and outworks. (..) The walk round the lofty ramparts is striking. (..) Part of the bases of the enormous Cyclopean walls have been thought to be anterior to the Romans. Ford 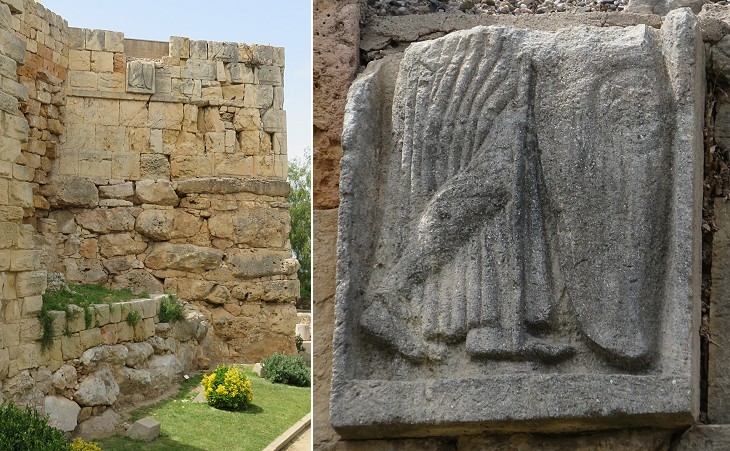 (left) Torre de la Minerva; (right) relief depicting the goddess, but the medallion on her shield looks like the head of a wolf rather than that of Medusa which decorated it in Greek statues

Even the ruins of the walls speak Latin and bear the impress of Caesar; what a sermon in these stones, which preach the fallen pride of imperial Rome! (..) The brothers, Publius and Cneius Scipio (the father and the uncle of Publius Cornelius Scipio), first occupied Tarragona, which Augustus raised to be the capital, having wintered here (26 B.C.), after his Cantabrian campaign. Ford
Tarraco must have been a considerable place before the Romans invaded Spain. (..) The Scipios, Octavius Augustus, and Adrian, made some stay here; its antique walls built by Scipio, were repaired by Adrian (who perhaps stayed at a villa along the coast).
Alexandre de Laborde - A View of Spain - translated into English for Longman, Hurst, etc. 1809 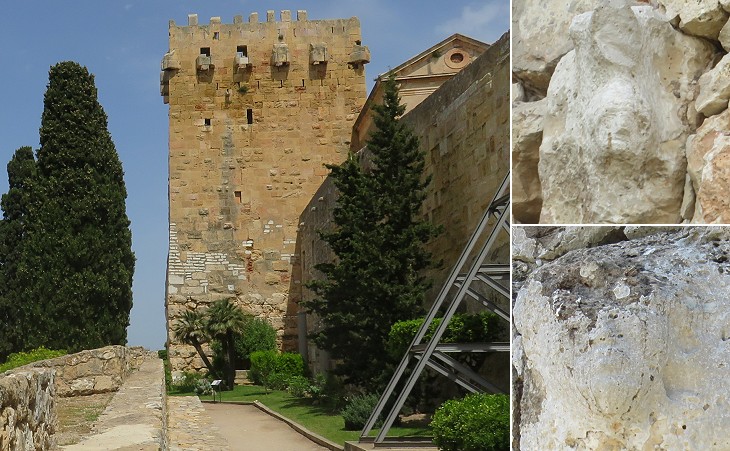 Its power first declined under the Goths; Euric their king took it in 467, and his soldiers, in revenge of its resistance, destroyed it. It was again sacked by the Moors, who besieged it in 714, and put all the inhabitants to the sword. Louis d'Aquitaine drove out the Moors in the year 805, but they recovered it. Raymond Berenger Count of Barcelona took it from them in 1117, and repeopled it the year following. Laborde
Tarragona, or rather the site, in 1118 was granted by San Oldegar, of Barcelona, to Robert Burdet, a Norman chief, a warrior. His wife, Sibylla, during her husband's absence, kept armed watch on the walls, and beat back the Moors, after which the city grew to be a frontier fortress, and nothing more; for Christian commerce centred at Barcelona, while Moorish traffic preferred Valencia. Ford 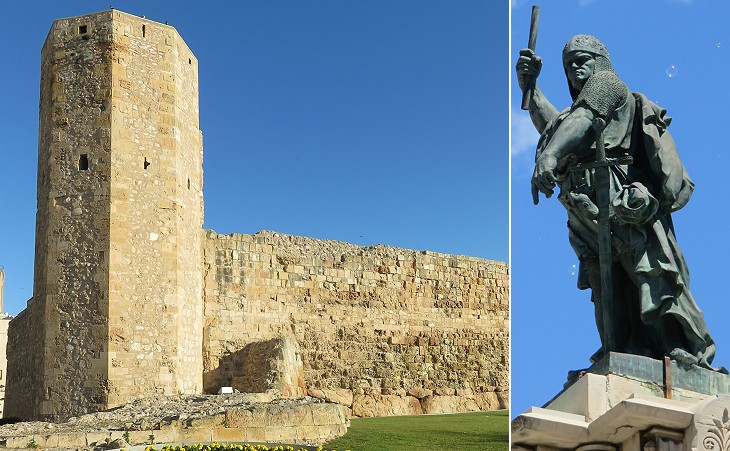 (left) Torre de las Monjas (Nuns), a medieval tower named after a nearby nunnery of the Poor Clares, and the "Muralleta" walls; (right) 1887 bronze monument by Feliu Ferrer Galzeran to Roger of Lauria, admiral of the Aragonese fleet in the wars for the possession of Sicily in 1282-1289

A new section of the city wall known as Muralleta (small wall) was built during the second half of the XIVth century. It utilized a part of the structures of the Roman circus. Three octagonal towers were built to strengthen the new defensive line, but only one is left. The new wall shows the expansion of the medieval town which benefitted from the political and military successes of the Kings of Aragon (and Counts of Barcelona) in Sicily and Sardinia. 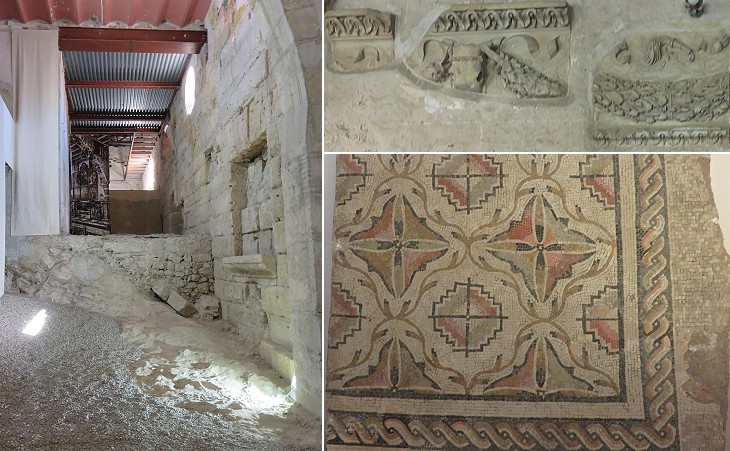 Cloister of the Cathedral: (left) Roman structures beneath the cloister; (right) Roman reliefs and a mosaic

Tarragona had a mint, and temples to every god, goddess, and tutelar; nay, the servile citizens erected one to the emperor, "Divo Augusto" thus making him a god while yet alive. This temple was afterwards repaired by Adrian, and some fragments in the cloisters of the cathedral are said to have belonged to it. Ford
Permission to build a temple of Augustus in the colony of Tarraco was granted to the Spaniards, and a precedent set for all the provinces.
Tacitus - Annales - Life of Emperor Tiberius - Loeb Edition
The permission was granted after the death of Augustus. The temples to Augustus often had a double dedication, i.e. to Rome and Augustus as at Athens and Ancyra (Ankara). 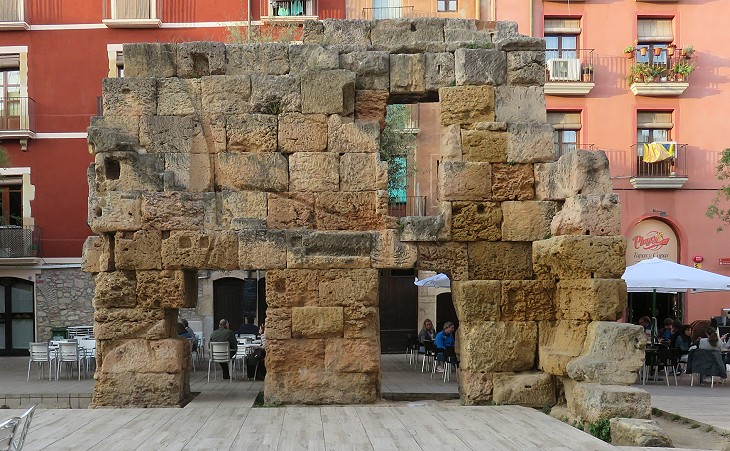 Walls of the Provincial Forum in Placa del Forum

Tarragona became, under the dominion of Rome, the capital of the Tarragonese province, or, in other words Citerior Spain. The town of Tarragona was the residence of the Consuls and the Pretors. Laborde
At the end of the Second Punic War Rome controlled all the coast of Spain along the Mediterranean Sea and that immediately beyond the Strait of Gibraltar. The Romans called Hispania Citerior (closer to Rome) the coastal territories from the Pyrenees to Nova Cartago (today's Cartagena), a port south of Sagunto, and Hispania Ulterior (farther) those from Nova Cartago to Gades (Cadiz) on the Atlantic Ocean. In the following two centuries Rome extended its power to the inland regions and eventually Emperor Augustus achieved control over the whole Iberian peninsula. He reorganized the Roman administration by dividing Hispania Ulterior into Baetica with capital Cordoba and Lusitania with capital Merida, whereas Hispania Citerior became known as Hispania Tarraconensis after the name of its capital. The temples and tribunals of the Forum in the Upper Town housed the ceremonies and the legal proceedings which were related to the Province, whereas a Forum in the Lower Town housed those concerning Tarragona as a town (also Merida and Cordoba had two fora). 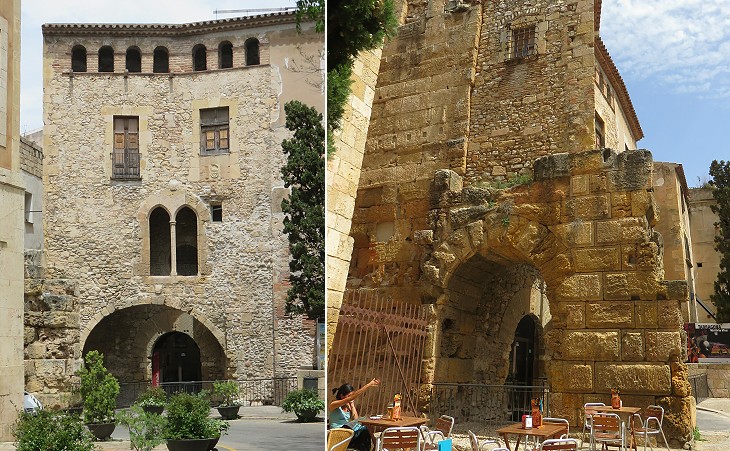 (left) Volta del Pallol (Granary); (right) its Roman structure which was part of the Provincial Forum

The ancient Tarraco is now contracted to a very trifling city, that covers only a small portion of the Roman enclosure. (..) Many antiquities have been found, and are still to be seen in the town, and almost all round the walls. Swinburne.
The Provincial Forum was built at the time of Emperor Vespasian and it had a large rectangular square surrounded by a portico. It was embellished with many statues, mainly of local magistrates or wealthy citizens who made donations for the construction of public facilities. Other statues were dedicated to the Genii (personifications) of the seven districts which made up Hispania Tarraconensis; the image used as background for this page shows a pedestal with the inscription "Genio Cluniens", Clunia Sulpicia being the capital of a district which included most of Old/Northern Castile.
The site of the Provincial Forum is that where the XIIth century town developed. It was built making use of the stones of the Forum and occasionally parts of the ancient structures were incorporated into the new ones. The overall layout of the medieval town is based on the rectangular shape of the Forum.

The Roman inscriptions imbedded here and elsewhere are so numerous that the walls are said to speak Latin. Observe the singular Hebrew-like inscriptions. There are Latin inscriptions also in the courtyard of the archbishop's modern palace and in the cathedral cloister. Ford
The Latin inscriptions in the centre of the town were mainly pedestals of statues in the Provincial Forum. 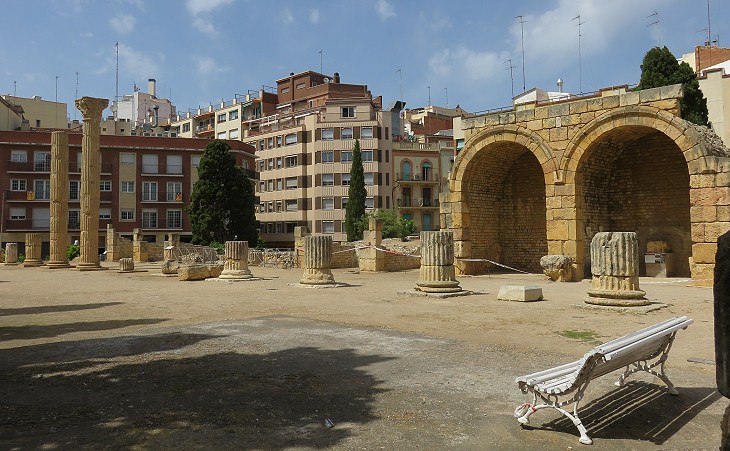 Tarragona consists of an upper and under town; the under is protected by a range of bastions (..) while an inner line of works protects the rise to the upper town. Ford
The Temple to Augustus, the Provincial Forum and the Circus occupied almost all of the area of the Upper Town; the houses which existed there at the end of the Ist century BC were pulled down to make room for these large monuments to the greatness of Rome and their inhabitants moved to the Lower Town.
In the 1920s the XVIth century fortifications which divided the Lower from the Upper Town were demolished to facilitate the development of modern Tarragona. This event led to unearthing another Roman Forum; it is called Colonial because Tarragona was a Colonia, the highest status of a Roman city. 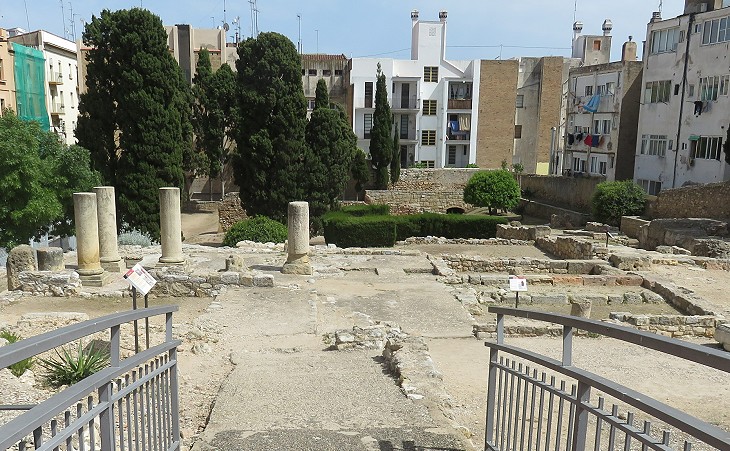 The Colonial Forum housed a Capitolium, a temple dedicated to Jupiter, Juno and Minerva, the deities who were worshipped in a great temple on the Capitol Hill of Rome and were regarded as a symbol of the city. Similar temples have been found in many Roman towns throughout the Empire (see the Capitolium of Thugga and that of Ostia). Ceremonies celebrating events of the history of Rome or of the life of the emperors were held at these temples. 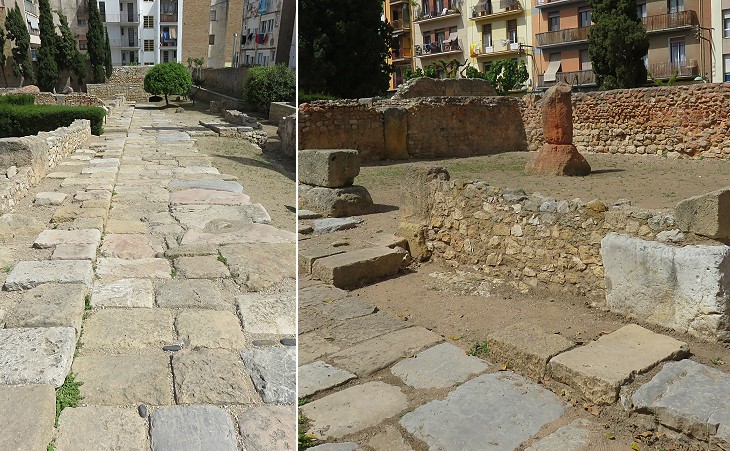