- Girona
(left - Mosaic at Italica; right - decoration at the Alcazar of Seville) 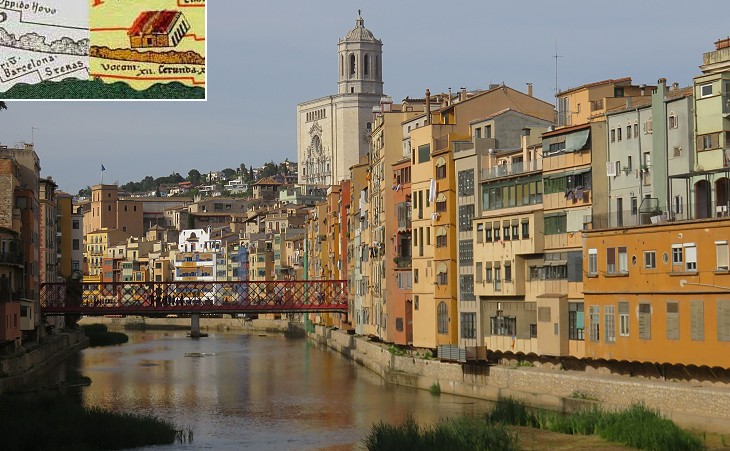 View of the River Onyar which empties into the River Ter and of the Cathedral; (inset) detail of "Tabula Peutingeriana", a Vth century AD map of the roads of the Roman Empire, showing Gerunda and Barcelona along "Via Augusta", the road which linked "Narbo Martius" (Narbonne) with "Gades" (Cadiz)

Girona, where we lay last night, is a large clean city, with some good streets; but poorly inhabited, and for the most part gloomy. The churches are darker than caverns; the gothic cathedral is grand, but so very dark at the upper end, that but for the glimmering of two smoky lamps, we should not have discovered that the canopy and altar are of massy silver.
Henry Swinburne - Travels through Spain in the Years 1775 and 1776 in which several monuments of Roman and Moorish architecture are illustrated
Swinburne, similar to many other travellers of his time, was greatly interested in the remains of Roman monuments, but he did not stop at Girona to look for them, although he knew it was an ancient town. 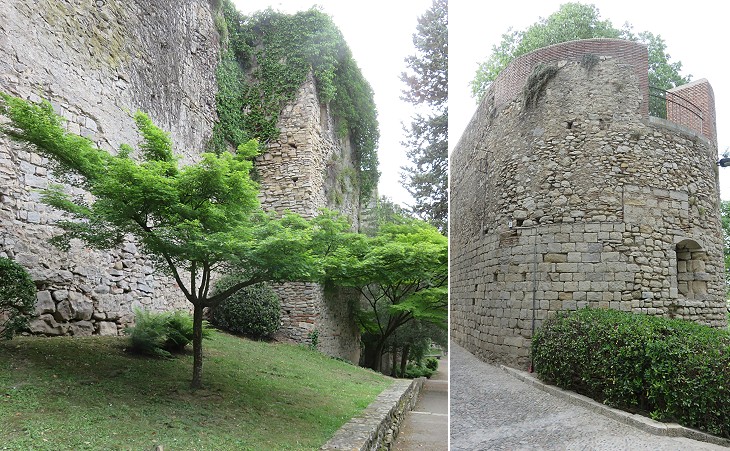 Gironne, in Latin Gerunda, in Spanish Gerona, is a fortified town, situated on the side and at the foot of a steep mountain. The Ter runs through the town, which is surrounded with good walls, flanked with fortifications. (..) This is an ancient city, and formerly gave its name to the eldest son of the kings of Aragon, who took the title of prince of Gironne: it is also famous for the different sieges it has sustained, and the defence it has almost always made. In 787, when it was besieged by Louis, king of Aquitania, the son of Charlemagne, it was surrendered to him by the Christians, who put the Moorish garrison to death. (..) The cathedral is built on the ridge of the mountain, which gives it a very elevated foundation.
Alexandre de Laborde - A View of Spain - translated into English for Longman, Hurst, etc. 1809
Girona was involved in so many war events that its Roman monuments have disappeared with almost the only exception of stretches of the ancient walls which can be seen along an archaeological walk similar to that at Tarragona. 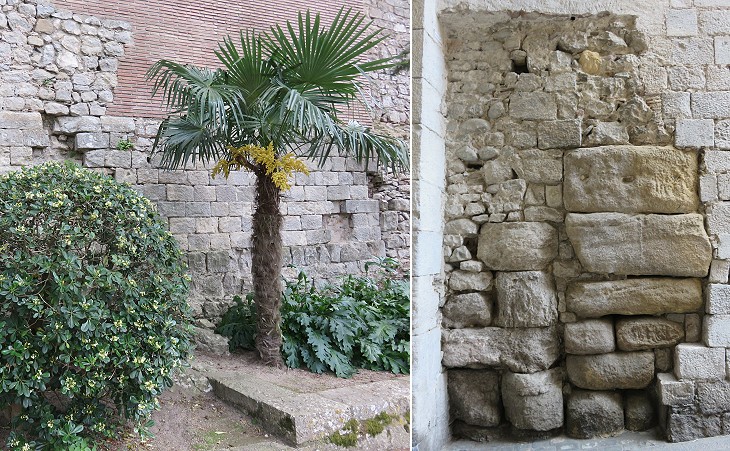 Passeig Arqueologic: detail of the walls (left) and of a building near El Banys Arabs (right)

Gerona placed by its military position in the very jaws of every invader, at no period has it escaped sieges, nor have the fierce natives shunned the encounter. (..) Gerona is of most remote antiquity. (..) Some derive the name from Geryon, who kept oxen near Cadiz, exactly the most distant, and most unlikely point: others contend for the Celtic Ger, near, and Ond, a confluence; and it is placed near the junction of the Ter and the Onyar.
Richard Ford - A Handbook for Travellers in Spain - 1855
The walls were modified many times through the centuries, but in their lower sections archaeologists found evidence of cyclopean, i.e. Pre-Roman, IInd century BC and IIIrd century AD structures. 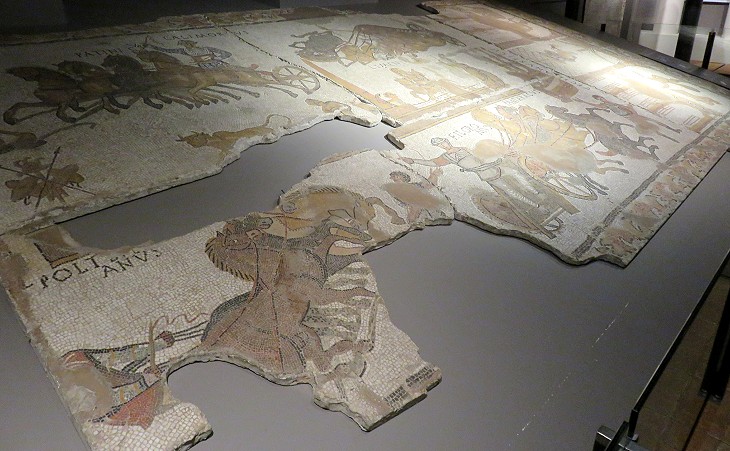 Museum of the City of Girona: Mosaic of the Circus from a villa at Can Pau Birol in the immediate outskirts of Girona (late IIIrd century-early IVth century AD - see a detail in the introductory page)

The lack of traces of the Roman tenure of Girona ended in 1876 when evidence of a villa was found under a medieval tower in the immediate outskirts of the town. The excavations led to recovering three floor mosaics which today can be seen in different locations. The Mosaic of the Circus is the largest one and, similar to a mosaic at Barcelona, it depicts a chariot race in the Circus Maximus of Rome. Museum of the City of Girona: Mosaic of the Circus: details: (left-above) Calimorus, the charioteer of the Blues, one of the four factions which competed in the races; (left-below) the "naufragium" of Limenius and an obelisk and statues on the "spina" (thorn), the raised area around which the chariots raced; (right) the "carceres", boxes from which the chariots started the race, and above them Mars and Rea Silvia

The pictor imaginarius, the craftsman who designed this complex mosaic most likely depicted a specific race which must have been well known at the time, perhaps because one of the chariots crashed. The Romans called naufragium such occurrences, the same word they used for a shipwreck. In this mosaic it is clear that the charioteers wore a helmet as a safety measure. You may wish to see a mosaic portraying charioteers which was found at Merida. Usually these mosaics depict four chariots, but a mosaic which was found at Lyon shows eight chariots, two per faction (certamen binarum) and the Circus Maximus of Rome had twelve carceres for a certamen ternarum, a race with three chariots per faction. 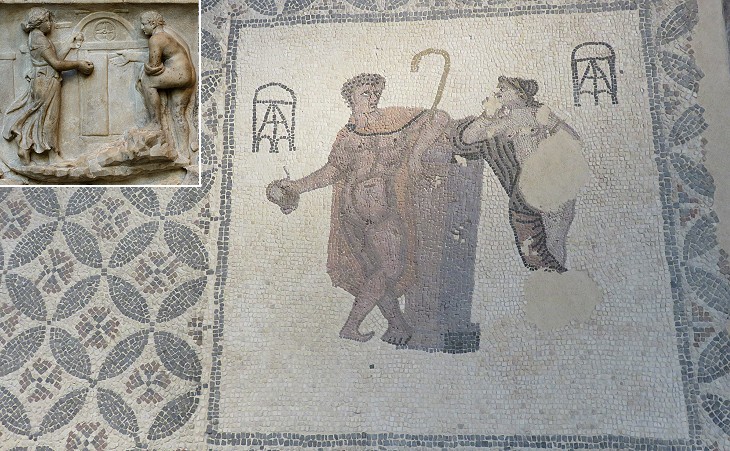 Archaeological Museum of Catalonia - Girona branch: Mosaic of Theseus and Ariadne; (inset) detail of a IInd century AD sarcophagus found near Rome in 1889 and now at the Metropolitan Museum of New York; it shows Ariadne giving Theseus a ball of thread at the entrance to the Labyrinth

This mosaic was initially believed to portray Apollo with a Muse, but today the man is thought to hold a ball of thread which identifies him as Theseus and the woman as Ariadne. They resemble statues and a lot of attention is paid to the depiction of Theseus' muscular body. The Athenian hero is often portrayed while killing the Minotaur while Ariadne is often seen together with Dionysus/Bacchus whom she married after having been abandoned by Theseus at Naxos. 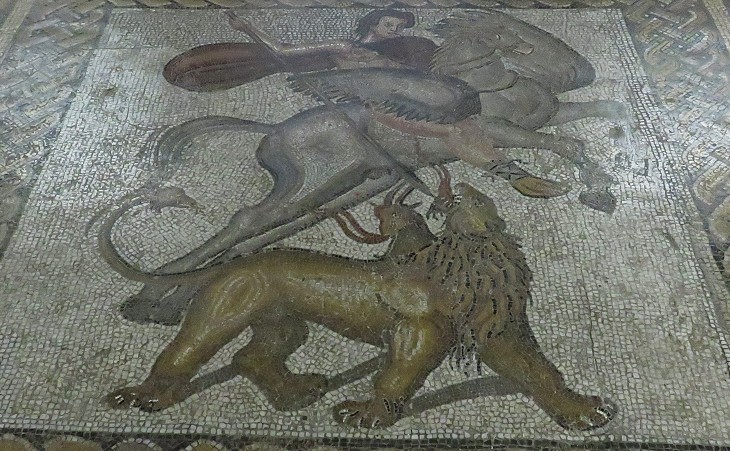 The origin of the myth of Saint George killing the Dragon has been traced back to funerary reliefs in Thrace, but it could as well derive from that of Bellerophon, at least as it is depicted in this mosaic. The Romans called pictor (painter) the craftsman in charge of the figurative parts of a mosaic; in this case the translation is very appropriate because this mosaic does resemble a Renaissance painting owing to the sense of depth it conveys (it even has shadows).
It would be worthwhile to bring together the three mosaics in the same museum. You may wish to see other Roman mosaics portraying Bellerophon and Chimera in England and France. 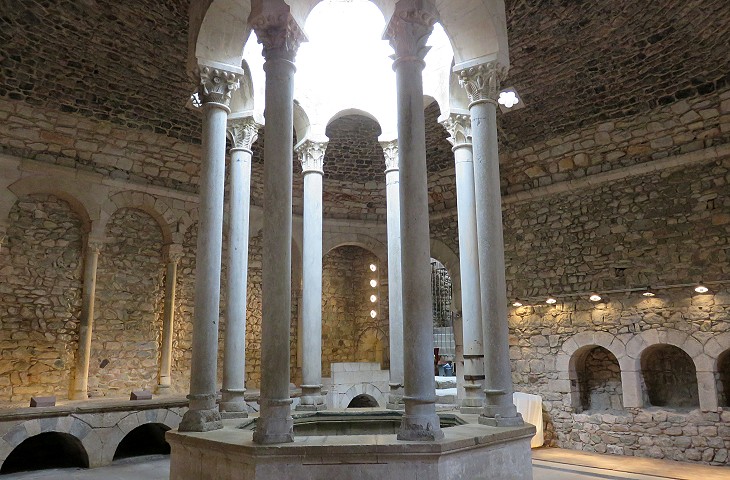 There is a very curious piece of architecture at Gironne, in the Capuchin convent; an Arabian bath, constructed in an elegant style, consisting of columns standing on an octagon stylobate, or low base, encircling a reservoir for the water. Laborde
Of the Moorish period there remains an elegant bath in the Capuchin convent, a light pavilion rising from an octangular stylobate. Ford The description by Laborde and the illustration in his book made popular this small building which in the 1930s was restored and detached from the convent into which it had been incorporated in 1618.
The Arab tenure of Girona lasted less than eighty years and the baths were not built during that time. They are first recorded in 1194 as a facility providing a revenue to the Cathedral. They were redesigned in 1294 after Girona had been sieged and damaged during a war between the King of France and that of Aragon. The use of the building as a bath establishment was discontinued towards the end of the XIVth century. The illustration by Laborde depicts the arches as having a slightly horseshoe shape, which is typical of Moorish architecture (see the Great Mosque of Cordoba), but those of the upper tier are full round which is a feature of Romanesque style. 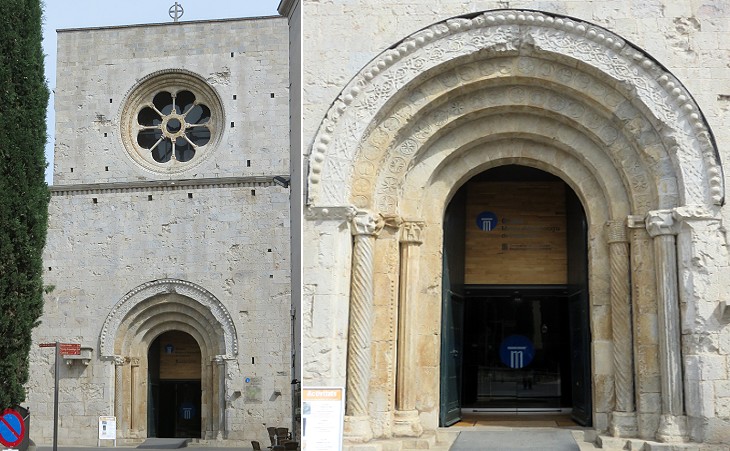 This church is a good example of the Romanesque style which was developed north of the Pyrenees around the year one thousand and reached Spain via Catalonia (see a page on the Romanesque churches of Segovia). The church and the adjoining monastery are first recorded in the Xth century, but the current church is dated ca 1131 whereas the cloister was built towards the end of the century. It houses the Girona branch of the Archaeological Museum of Catalonia with many exhibits from Emporiae. The mental association with the church by almost the same name at Jerusalem on the spot where Peter denied knowing Jesus Christ three times before the cock's crow (Galli Canto in Latin) is obvious, but void of evidence because the name of the church at Girona derives from Rio Galligants, a nearby small stream. 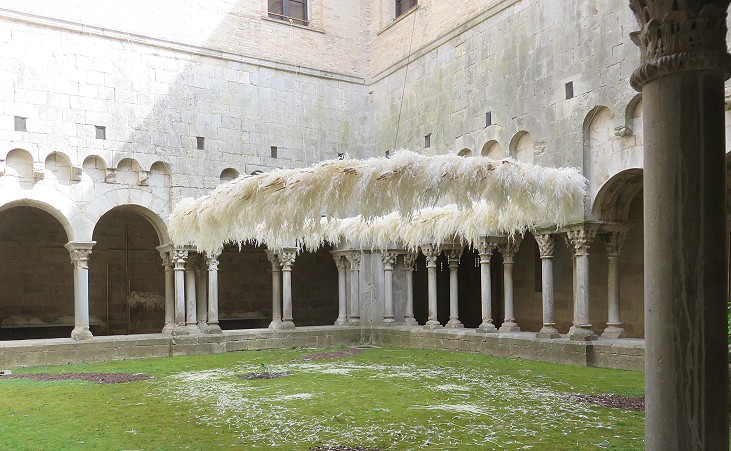 The small cloister has capitals with a very varied decoration similar to those at Sant Pau del Camp at Barcelona. The image used as background for this page shows a capital of the cloister. 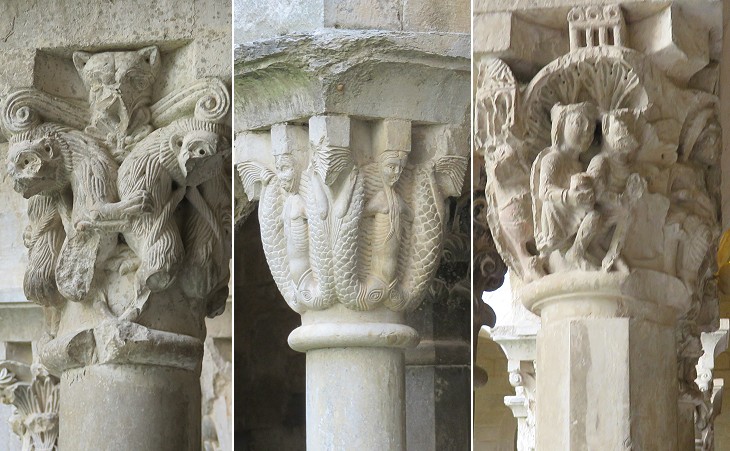