- Archaeological Park of Carranque
(left - Mosaic at Italica; right - decoration at the Alcazar of Seville) 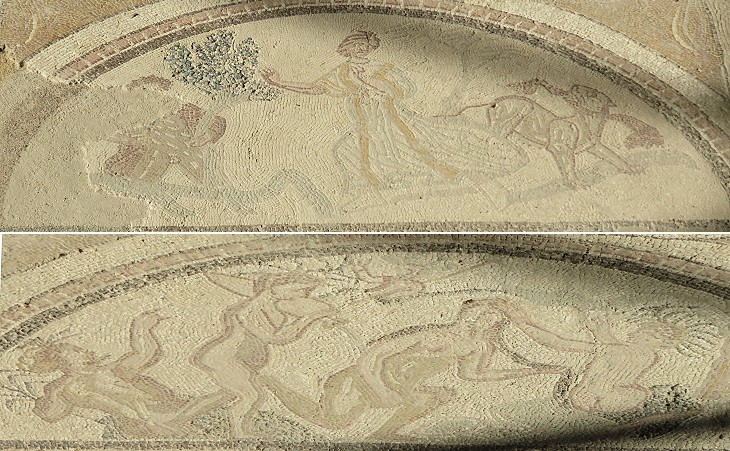 Villa di Materno: Mosaic of The Metamorphoses in the "cubiculum" (bedroom) of Maternus: (above) Pyramus and Thysbe; (below) Diana taking a bath during which she was seen by Actaeon

One day, while watering my field, I found a very small piece of mosaic; I only had four or five "tesserae" (tiles), but it was enough to show that those remains were Roman and by consequence that there were mosaics in the Roman ruins of the area. This fact aroused my curiosity even more, since it was possible that there were still some of those mosaics in the area.
Time passed without anything new appearing, except for a piece of "sigillata" (a type of Roman red pottery) and little else, but on the morning of July 23, 1983, the miracle occurred. Under the rake, I saw some loose tiles and found some pieces of mosaic that the plough had torn off. With a stick I began to scratch the ground and then the rest of the mosaic appeared. It was there, at a depth of only ten centimetres. Then I went to look for my brothers and we returned with hoes to dig. In a few minutes we had before us the mosaic of The Metamorphoses, and, although we still did not know it, one of the most important archaeological sites in Spain.
From the website of Samuel Lopez Iglesias who discovered the mosaic. 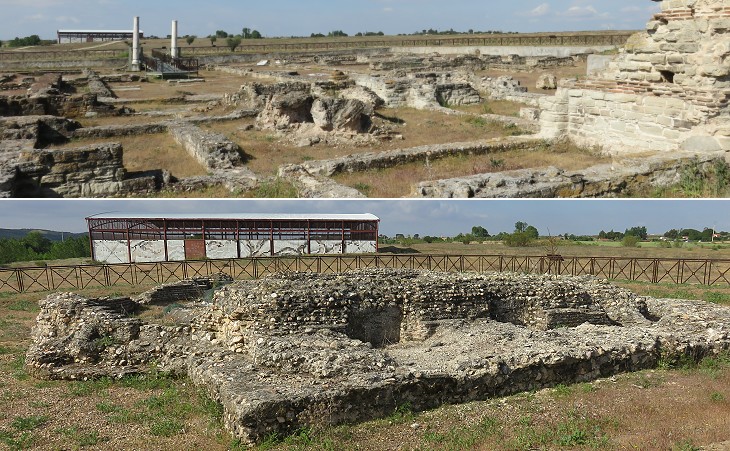 (above) View from the Palace towards Villa di Materno, which is sheltered to protect its floor mosaics; (below) funerary monument or a monumental fountain near Villa di Materno

Mr. Lopez Iglesias was aware that his field lay in an area where the Romans had built something, because some ancient walls stood above the ground. The site is near Rio Guadarrama, a minor stream which has its source in the mountains by the same name and which empties into the River Tagus at Toledo. Through the centuries its occasional floods covered the foundations of the villa by a thin layer of earth.
In medieval times the area was scarcely populated and unhealthy. Today it is part of the Municipality of Carranque which is crossed by the new Madrid-Toledo (AP-41) toll road. 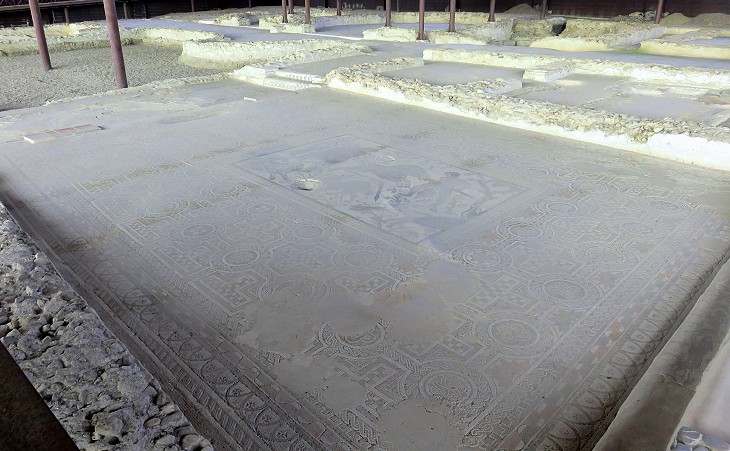 Villa di Materno: overall view and Hall of the "Triclinium" (dining room) in the foreground

The mosaic found by Mr. Lopez Iglesias gave a clue about the building it decorated as it had an inscription saying that the floor had been "painted" by Hirinus for the bedroom of Maternus. Roman mosaic makers in charge of depicting images were referred to as pictores (painters). The inscription mentioning Maternus was not part of the original decoration of the villa, so, because of the lack of other evidence, we do not know the name of who founded the building in the late IVth century AD. 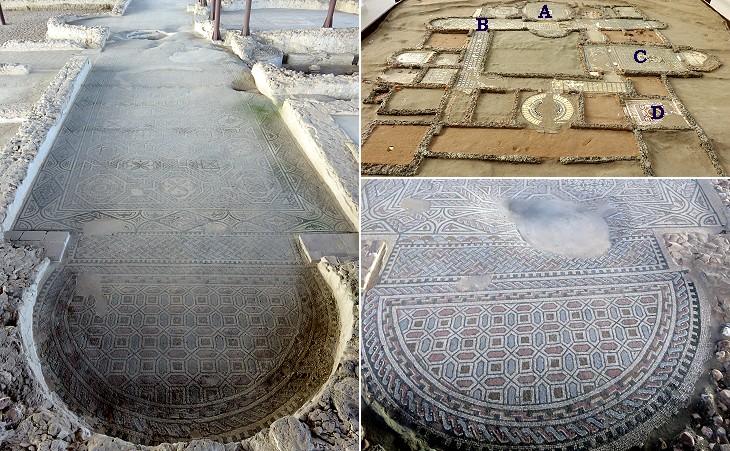 The layout of the villa is structured around a central square garden, similar to the peristyle of a typical Roman house. The long hall brings to mind that at Villa del Casale in Sicily, a very large mansion of the early IVth century AD. For an example of a villa of the heyday of the Roman Empire see Villa di Poppea at Oplontis near Pompeii. 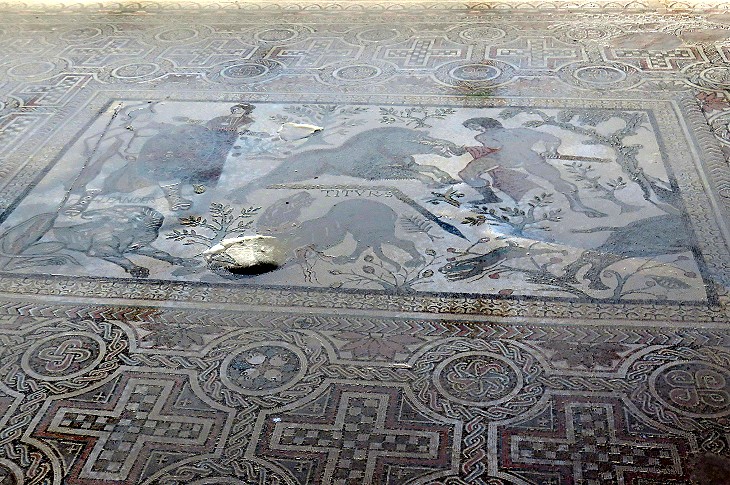 Hall of the Triclinium: Mosaic of Adonis and the Wild Boar; on the left Minerva and Venus are watching the scene and below Leander and Titurs, Adonis' hounds, are bleeding to death. Learn more about Adonis' death

The villa was the residence of the owner of a latifundium, a large estate. The origin of latifundia lies in the fact that beginning in the early IInd century AD the typical small Roman farm of an army veteran became no longer able to compete in the marketplace. Over time these farms were bought by members of the upper classes and sometimes their owners sold themselves and their families too. This development led to the creation of large estates where some landlords chose to reside in manors which showed their social status. A mosaic at the Museum of Carthage shows the life in one of these countryside mansions. 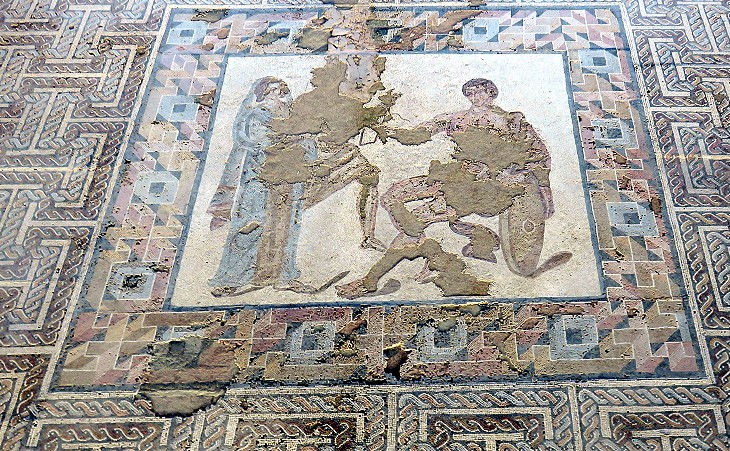 Villa di Materno: Mosaic of Achilles and Briseis in the "oecus"

The villa was decorated at the time of the transition between the old pagan beliefs and the Christian faith. It is possible that the landlord was a Christian, but he felt that the poems by Homer and Ovid were the most suitable source of subjects for the decoration of the public part of his villa. There he received guests and he dealt with business matters: the mosaics showed that he belonged to the upper rank of society, not only in terms of wealth, but also from an intellectual point of view. 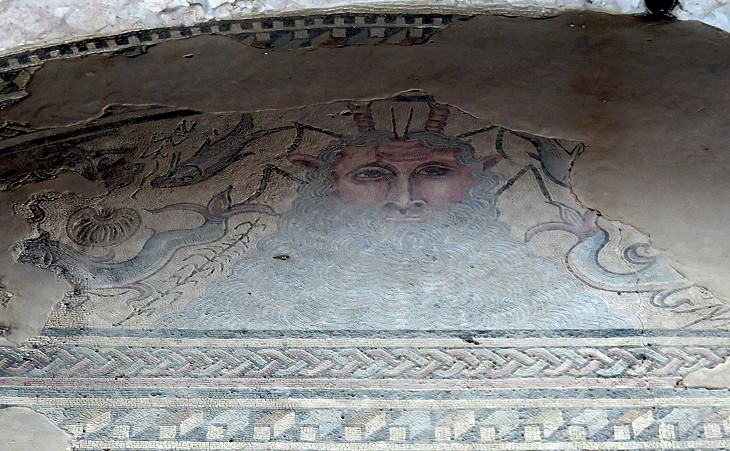 Villa di Materno: Mosaic of Oceanus in a small fountain opposite the "oecus"

Oceanus with lobster claws on his head and surrounded by real or fantastic sea creatures was a very popular subject for mosaics embellishing fountains and baths. At Antioch the god was depicted in all his majesty as a Jupiter of the Sea, but here, as well as at Setif in Algeria and Thuburbo Majus and Utica in Tunisia, he was portrayed as a grotesque creature. 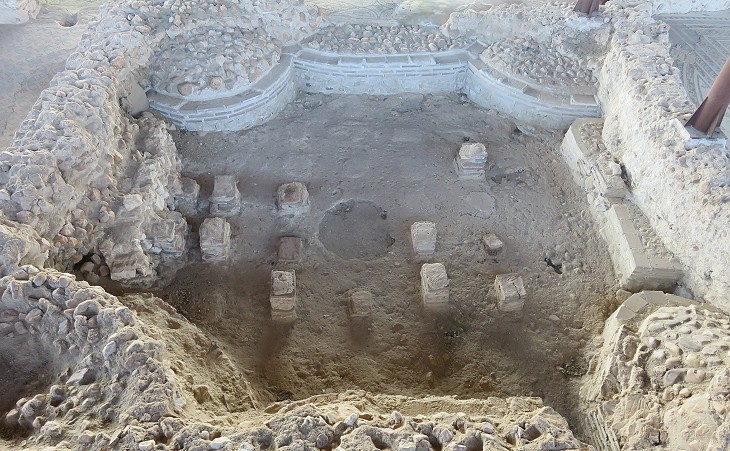 Heating system of a hall adjoining the "oecus"

Excavations unearthed an octagonal hall, most likely a library, with a hypocaust heating system. It was usually utilized for halls of baths, but here it made sitting on a chair to read a papyrus scroll in winter more pleasant. Carranque is situated in the Meseta Central, a large plateau in the heart of Spain with an approximate altitude of 650 metres (2,100 ft) above sea level. In January night-time temperatures hover around freezing, while daytime temperatures are around 10 °C (50 °F), but during cold spells they significantly drop. 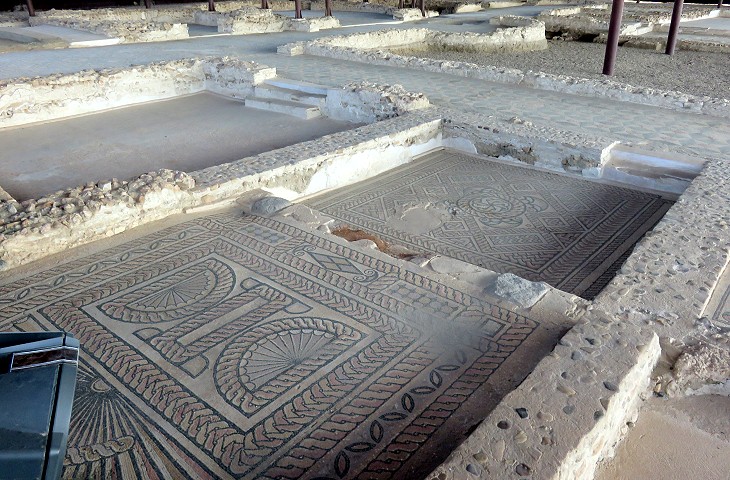 Villa di Materno: Geometric mosaics in two sleeping rooms (another geometric mosaic is shown in the image used as background for this page)

In general the geometric mosaics of the villa are more finely executed than those showing gods or heroes. Another Roman villa (Villa la Olmeda) with fine geometric mosaics was discovered in 1968 in the northern part of Meseta Central near the Cantabrian Mountains. 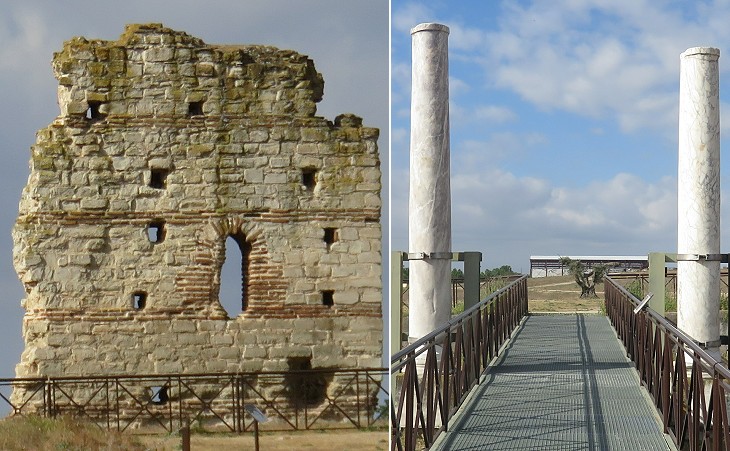 While the walls, the columns and other architectural elements of the villa were swallowed by the ravages of time, an ancient wall continued to stand at a short distance from it. Archaeologists believe it was part of a palace which was built after the villa, possibly to provide Maternus and the other landlords with a more imposing location where to meet their coloni (tenant farmers) or perhaps administer justice. The wall is an example of opus listatum (a construction technique based on layers of stones and bricks) which characterizes the Walls of Constantinople and the Aqueduct of los Milagros at Merida. 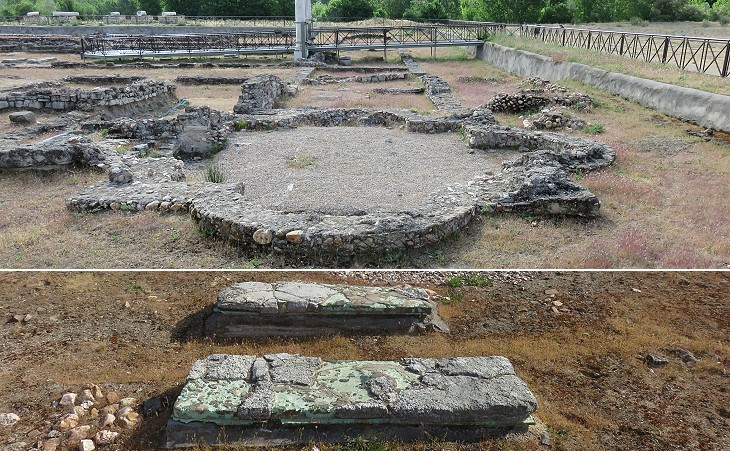 (above) Baptistery; (below) Visigothic tombs

There is no evidence of the villa having been used for other purposes, while a church and a detached baptistery were nested inside the palace. The church housed some tombs, a practice which gained ground on the assumption that being buried in a holy site helped the salvation of the soul (see a funerary basilica at Uppenna in Tunisia and another one at Salona in Dalmatia).