- Olmedo
(left - Mosaic at Italica; right - decoration at the Alcazar of Seville) From Valladolid we proceed to a district which bears the marks of careful culture, and arrive at Olmedo, a small town situated on an eminence in front of an extensive plain; it was formerly surrounded by walls, some remains of which are still visible; has seven parochial churches, and as many religious houses. (..) The population of this place was once considerable, but is now reduced to two thousand inhabitants, who carry on no other traffic than what is derived from their brick-kilns.
Alexandre de Laborde - A View of Spain - translated into English for Longman, Hurst, etc. 1809 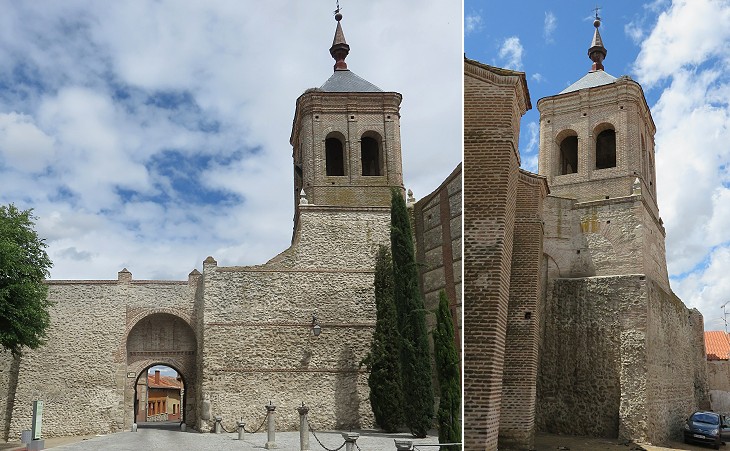 Olmedo is a ruined town in a fine plain, rich in corn and pasturage, in droves of brood mares, and flocks of black sheep; some pine-woods, in one of which is a grand monastery, bound the horizon very agreeably.
Henry Swinburne - Travels through Spain in the Years 1775 and 1776 in which several monuments of Roman and Moorish architecture are illustrated
Olmedo owes its name to an isolated large elm which sheltered gatherings of herdsmen on hot days. Other locations in Castile have similar names, e.g. Olmeda in the north of the region where an interesting Roman villa was found in 1968. 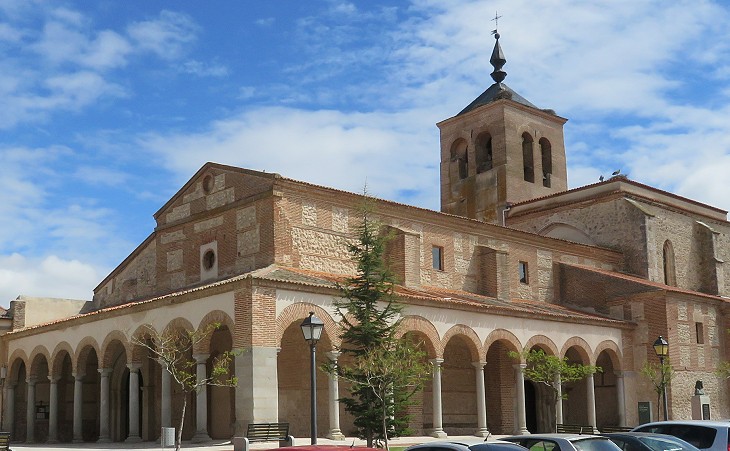 The sandy road to Olmedo has recently been changed and repaired, but its dullness never can be removed. This decayed walled town, of former importance, is celebrated for the bloody battles in 1445 and 1467, during the civil wars. (..) Olmedo is situated in a plain, irrigated by the Adaja and by the Eresma (a river which crosses Segovia). The dreary sandy steppes produce wine, corn, etc.
Richard Ford - A Handbook for Travellers in Spain - 1855
The First Battle of Olmedo was originated by a quarrel about feudal rights between the King of Castile and those of Aragon and Navarra. The latter were defeated. The Second Battle of Olmedo occurred during a conflict between King Henry IV of Castile (half-brother of Isabella) and his brother Alfonso. It was undecisive, but in the following year Alfonso died of sickness. 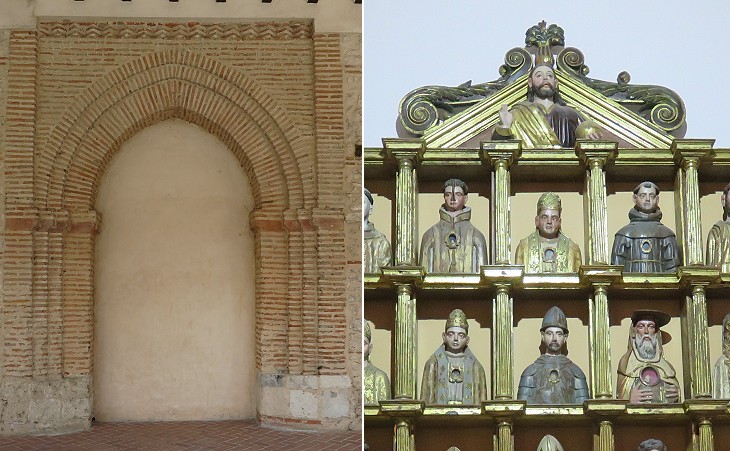 Iglesia de Santa Maria del Castillo: (left) mudéjar portal; (right) reliquary donated by King Philip II of Spain to a Hieronymite monastery near Olmedo which was closed in 1836 (see the Golden Room, a similar reliquary at St. Ursula's in Cologne)

The first record of Olmedo is associated with its conquest in 1085 by King Alfonso VI of Castile, who in the same year conquered Toledo. The king repopulated the town in 1093 and the walls of Olmedo were built in the next century.
Santa Maria del Castillo was built at that time in Romanesque style, similar to many churches of Segovia, but its original features were modified in the XVth and XVIth centuries. Mudéjar is the term used to indicate the Moorish style which characterizes some monuments which were built after the Christian Reconquista of Spain, the finest example being the Real Alcazar of Seville. In Castile and Aragon, where the Reconquista occurred in the late XIth or early XIIth century, the mudéjar style acquired features of its own, whereas in southern Spain it more clearly resembled the Moorish monuments of Cordoba and Granada. In 1999 a park was opened outside the walls of Olmedo to house a number of scale models of churches, palaces and fortresses of Castile which were built in the local mudéjar style. 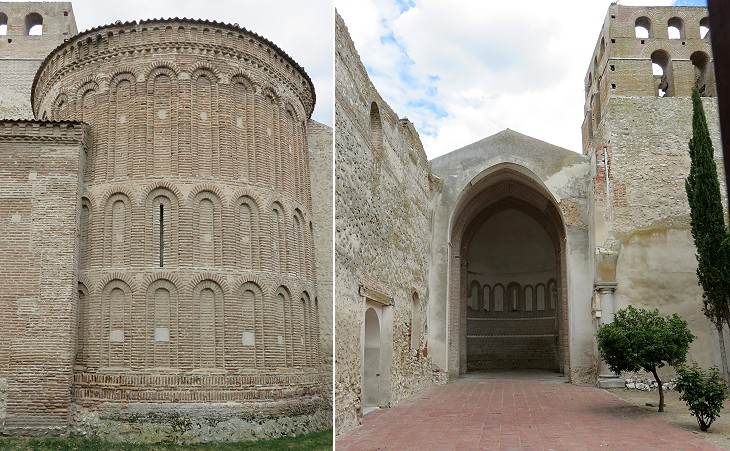 Mudéjar features can be noticed in many monuments of Spain in association with those of the European style of the time: Romanesque in the XIIth and XIIIth centuries, Gothic until the XVth century (see some churches of Seville) and Renaissance (see the Chapterhouse of the Cathedral of Toledo) until the XVIth century. A unique blend of styles was created at some locations e.g. at Teruel in Aragon. Iglesia de San Miguel; in the image used as background for this page you can see its front in the scale model at Parque Tematico del Mudéjar

A characteristic of the churches of Olmedo is the elaborate use of bricks for decorative purposes. It is a craftsmanship which was first developed by the Romans when they perfected the manufacture of fired bricks. Sepolcro di Annia Regilla near Via Appia is a fine example of how bricks were used to make buildings which resembled a classical temple. You may wish to see Castillo de Coca, a fortress with an elaborate brickwork near Olmedo. 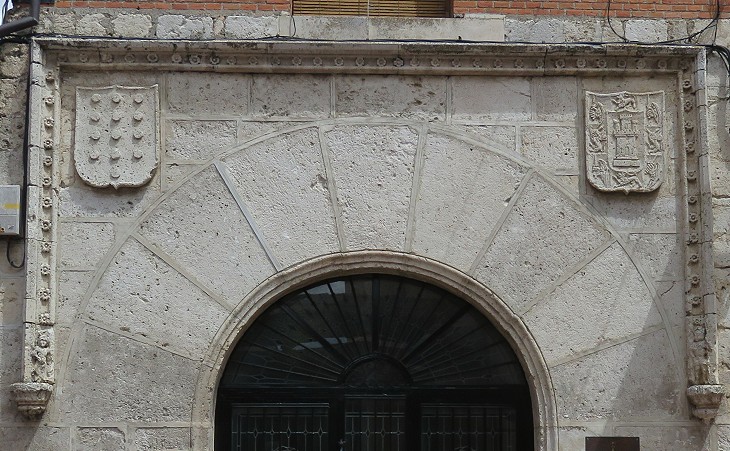 The use of a sculptured white stone in this portal of Olmedo attracts the attention of the visitor. The Davila were a noble family of Avila, a town near Olmedo, the birthplace of St. Teresa of Jesus. 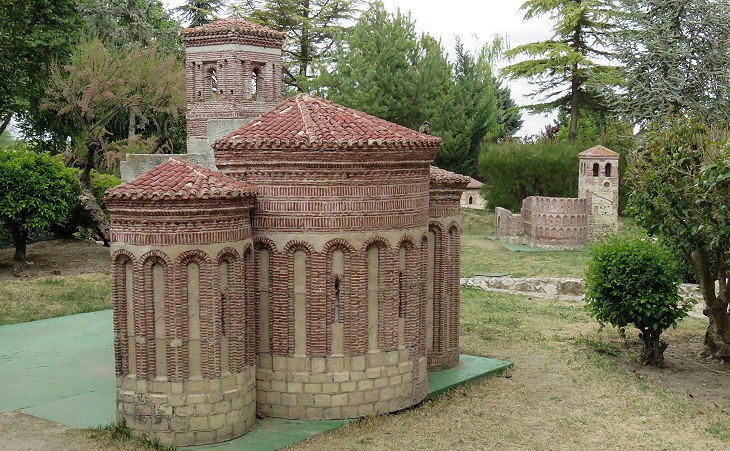