Spoleto: Churches outside the Walls
(relief of a tabernacle in S. Gregorio Maggiore)

You may wish to see a page on medieval Spoleto first. 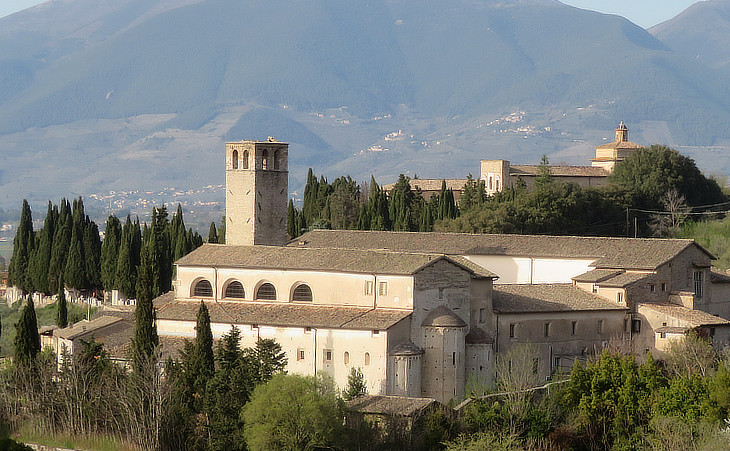 S. Ponziano in the front and S. Salvatore in the background seen from near the Cathedral

Colle Ciciano is a low hill outside the north-eastern walls of Spoleto; it was the site of early Christian cemeteries and later on some of the hermits of Monteluco chose to live there. It was always regarded as a holy location and it was chosen for the construction of two medieval churches and convents on the assumed site of the martyrdoms of local saints. In the XIXth century S. Salvatore became the funerary chapel of a modern cemetery. 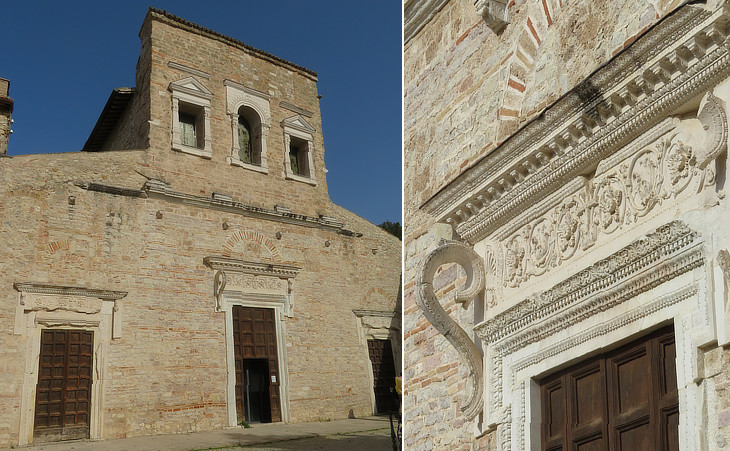 About 500 paces out of the city there is a little temple formerly consecrated to Concord and now called the chapel of the Crucifix.
Thomas Nugent - The Grand Tour - 1749
Spoleto, October 1786. San Crocefisso, a singular chapel on the road side, did not look, to my mind, like the remains of a temple which had once stood on the same site; it was evident that columns, pillars, and pediments had been found, and incongruously put together, not stupidly but madly. It does not admit of description; however, there is somewhere or other an engraving of it.
Johann Wolfgang Goethe - Italian Journey - translation by Charles Nisbeth. It is more likely that Goethe visited Tempio sul Clitunno which stands along the road between Trevi and Spoleto.
The church became known as San Salvatore in the XIXth century.

The first written records about the church say that in the XIth century it belonged to a community of nuns, but it was definitely built at an earlier period, although when exactly is still debated. Considering that under the Ostrogothic and Byzantine rules large and splendidly decorated basilicas were built at Ravenna, the prevailing opinion suggests that S. Salvatore was built after the Longobards had conquered most of Italy, including Spoleto, and the whole country had been greatly impoverished by a major pestilence.

Museo del Ducato di Spoleto (in the fortress): cast of the rear part of the lintel of the main portal with an erased face, perhaps that of a god

The construction and decoration of the church was largely based on the use of Roman spolia. The lintel of the main portal was decorated with a cross and finely executed classical motifs, but during its restoration it was discovered that the original marble came from the ceiling of a Roman building (see an example in Rome). 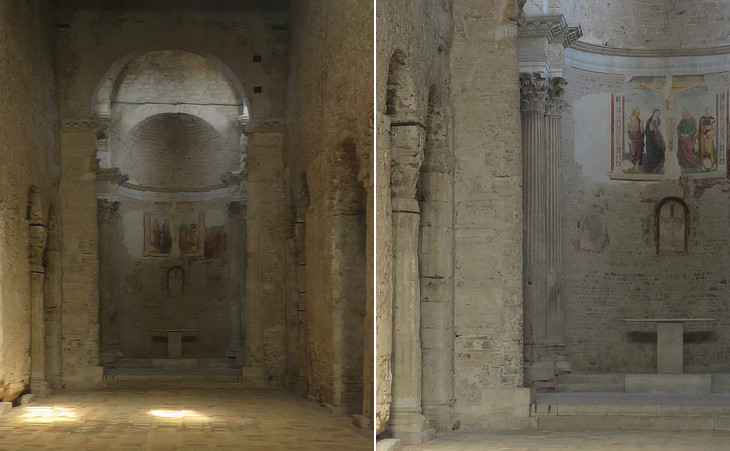 Spoleto testifies to an urban basilica for the Lombard elite. The Basilica of San Salvatore was no doubt originally a funerary church; it has a triple-nave basilical floor plan with a tripartite presbytery. The semi-circular central apse is separated from the nave by a chancel and flanked by two apses with cross-vaults. The central bay preceding the choir is covered with an octagonal vault. Doric columns in the nave and Corinthian in the presbytery support a richly decorated entablature. The painted and stucco decoration has been lost. The facade, punctuated by pillars and divided into two registers by a cornice, still retains three portals decorated with classical motifs.
UNESCO - Brief synthesis of the universal value of S. Salvatore which was included in the World Heritage List in 2011, with other Longobard monuments in Italy (e.g. Tempietto Longobardo at Cividale, S. Giulia at Brescia, S. Sofia at Benevento and Tempio sul Clitunno north of Spoleto). 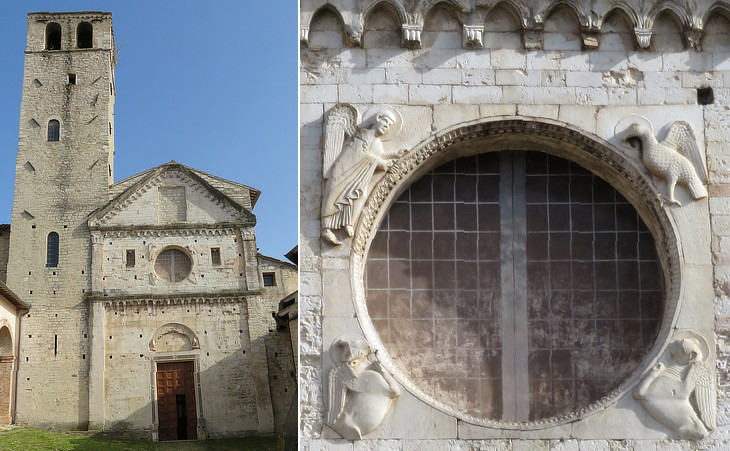 S. Ponziano: (left) façade; (right) detail of the rose window showing the symbols of the Evangelists

St. Pontianus, a martyr of the IInd century AD is the patron saint of Spoleto and he is specially invoked against earthquakes. A monastery with a church dedicated to him was built on the site of his burial place in ca 1000. The Romanesque façade is dated XIIth or XIIIth century and it retains part of its original decoration. The interior of the church was entirely redesigned in 1788. 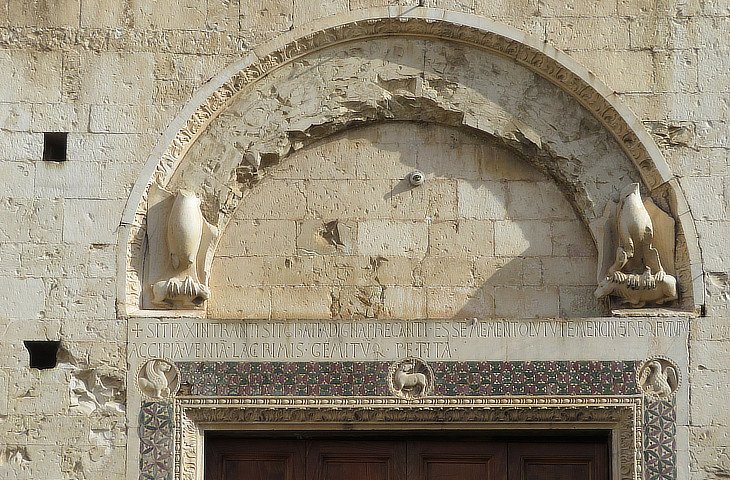 S. Ponziano: detail of the portal

The portal was decorated with a fine band of Cosmatesque mosaic, the Lamb of God, the Lion of St. Mark and the Eagle of St. John. Two headless eagles clutching preys stand above a long inscription:
SIT PAX INTRANTI SIT GRATIA DIGNA PRECANTI ESSE MEMENTO LVTV[M] TEMEN CINERE[S]Q[UE] FVTVRV[M] ACCIPIA[S] VENIA[M] LACRIMIS GEMITV[S]Q[VE] PETITA[M]
"Peace to the one who enters, to the one who prays the goodwill he deserves. Remember that you are merely dirt and will become ashes. May you receive the pardon you request by tears and moaning". The sentence can be regarded as an early example of that Memento Mori fashion which characterized many XVIIth century Roman funerary monuments. 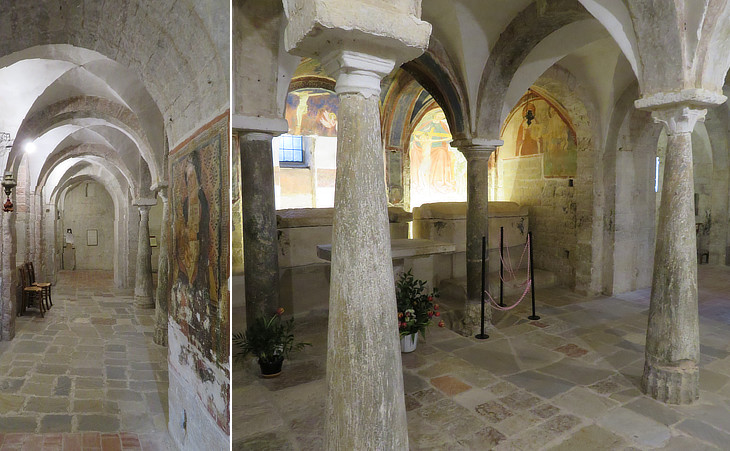 The XVIIIth century redesign of the interior did not impact on the crypt which, similar to that of S. Gregorio Maggiore was built making use of some ancient columns. Those which are tapered are thought to have been metae of a small Roman circus. The crypt has five apses all of which were decorated with frescoes in the XIVth and XVth centuries. 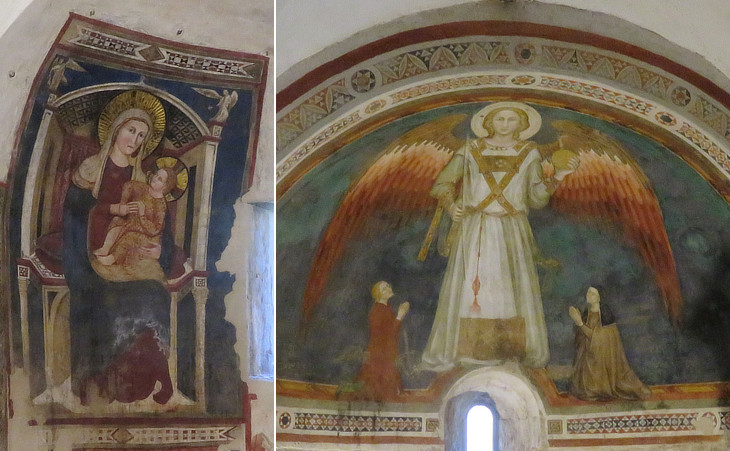 Some of the frescoes are attributed to local painters who are known as Maestro di ... (Master of .. a location or another painting). St. Michael the Archangel between two kneeling figures is attributed to Maestro di Fossa, a town in the Abruzzi and it is dated XIVth century. Restorers found traces of gold and lapis lazuli which were used to increase the brilliance of the fresco.. 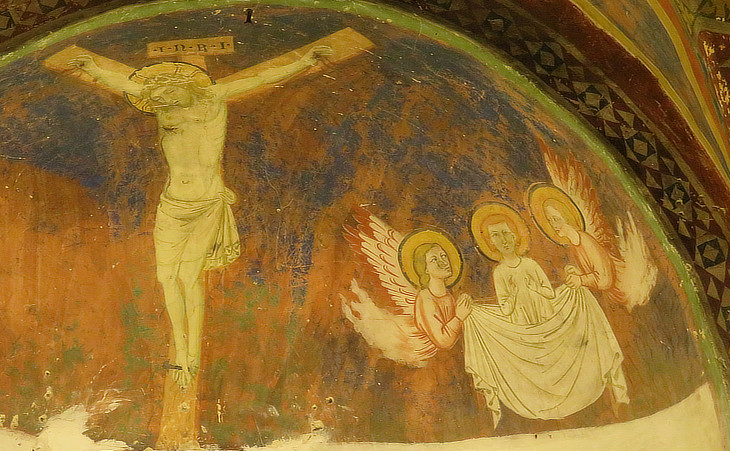 S. Ponziano: fresco in the central apse of the crypt (XVth century)

The fresco is interesting for its depiction of an unusual Y-shaped or forked cross and of angels carrying the soul of Jesus as a boy to Heaven. 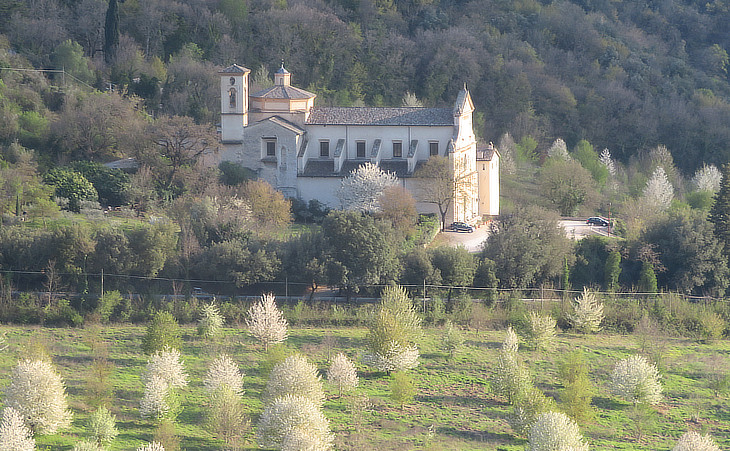 We may descend to the Porta Romana, outside which is a charming passeggiata, an avenue of acacias with box hedges. It leads towards a convent on a hill. (..) On the left, approached by a long flight of steps, is the Church of S. Pietro, the original cathedral dedicated to S. Brizio, who is buried there.
Augustus J. C. Hare - Days near Rome - 1875.
St. Brizio, an early martyr, is recorded as the first bishop of the town; also this church was built on the site of an early Christian cemetery, most likely in the Vth century (a beautiful chapel in the Cathedral of Orvieto is dedicated to St. Brizio, one of the patron saints of that town, most likely St. Brice of Tours, a Vth century bishop). 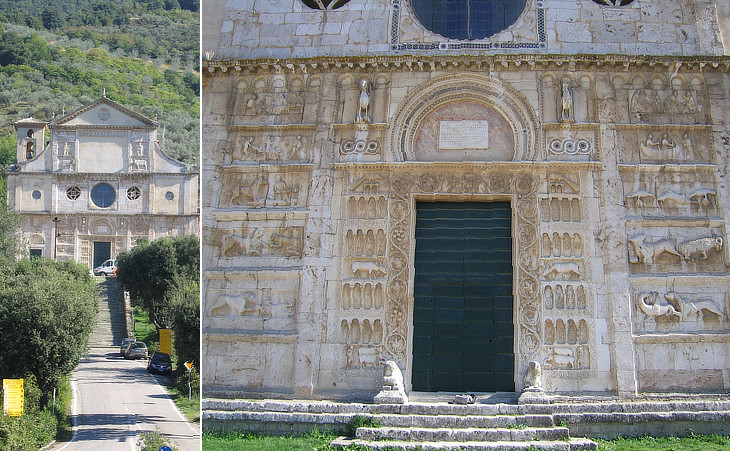 In the XIIth century the early church was replaced by a new one which is the finest Romanesque monument of Spoleto. Its façade is almost entirely decorated with very interesting reliefs. In 1329 it was greatly damaged during an infight between local factions, but the façade was spared. The upper part of the façade was most likely meant to house a mosaic, similar to what can be seen in the Cathedral.

S. Pietro - medieval reliefs: a) doe killing a snake; b) punishment of the sinners; c) vocation of St. Peter and St. Andrew; d) farmer with his dog and oxen

The west front is most curious: between the square-headed doors are reliefs of monsters, men in conflict with lions, and angels and devils disputing over the dead. Above are cows, and male figures, in high relief. Hare
We do not know the name of the artists who worked at the decoration of the façade: the reliefs to the sides of the main door are likely the work of the same sculptor: although apparently they do not seem to have a common theme, they do have one: the fight between good and evil as illustrated by episodes taken from the Bible and from medieval accounts.
You may wish to compare these reliefs with those at the side of the main portal of S. Zeno, a large Romanesque church of Verona and those of the Cathedral of Orvieto (XIVth century). 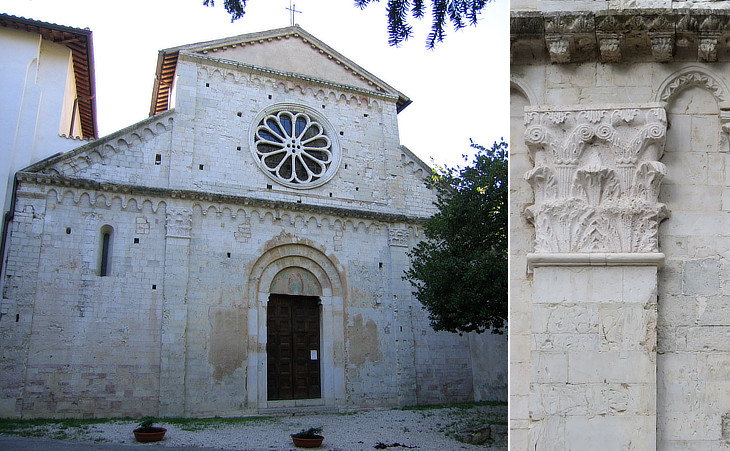 inter vineas (among the vineyards) is a reference to the location of the church on a low hill opposite S. Pietro which is still farmed. Here too an early church is recorded in the VIth century. The present church is dated between the XIth and the early XIIIth century. It was attached to a monastery or to a nunnery depending on the period and this until the XIXth century. 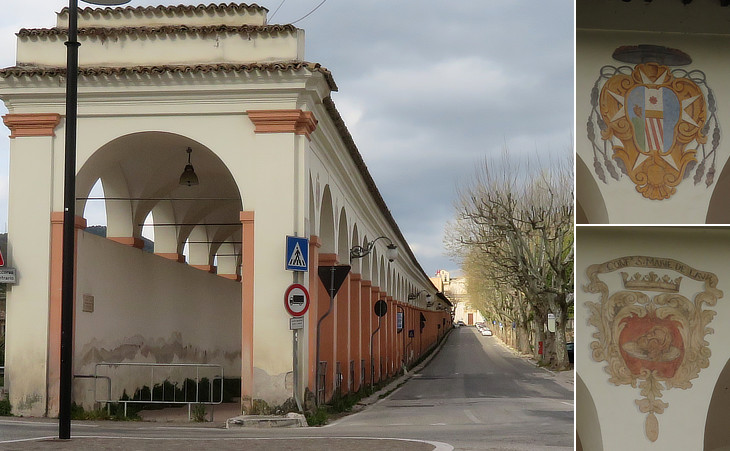 (left) Portico di S. Maria di Loreto; (right) coats of arms of a bishop and of a brotherhood

Pope Sixtus V was born in the Marches and he had a special veneration for Our Lady of Loreto; he promoted an improvement of the facilities for the pilgrims at Loreto. He was imitated by the bishops of Spoleto who, with the help of local brotherhoods and wealthy families, built a long portico which from Porta S. Matteo led to a newly built church on an adjoining hill. The portico was used also during a yearly fair which was held there since 1598. 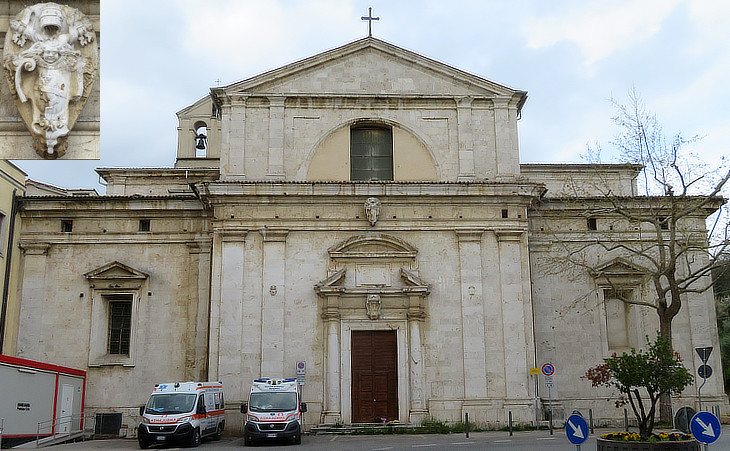 The church was built to shelter an existing small chapel, similar to what was done at Loreto with the Holy House. It was designed by Annibale Lippi, a Florentine architect. The construction was completed in 1604. Similar to other churches of that period, e.g. S. Luigi dei Francesi in Rome, the two stories of the façade have the same width.

The image used as background for this page shows a frieze at S. Pietro.