You may wish to see pages on Trajan's Arch, other Roman monuments and Medieval Benevento first. 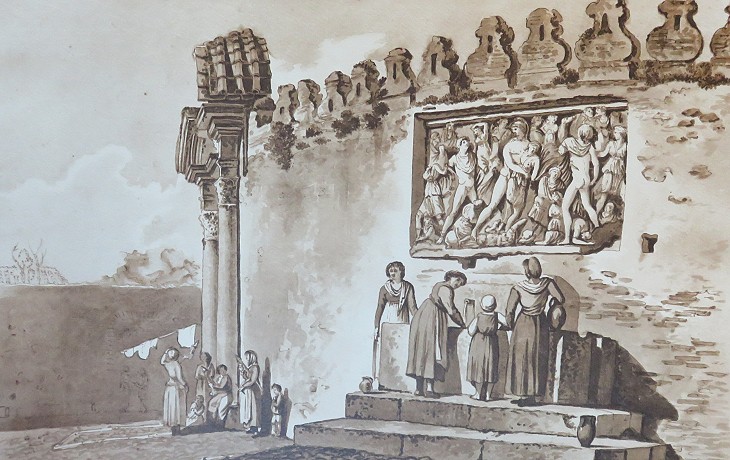 Carlo Labruzzi, a painter who travelled with Sir Richard Colt Hoare - Outer wall of the enclosure of S. Sofia

I noticed also a fine basso relievo, representing the battle of the Amazons (actually the Rape of the Sabines), placed over a fountain near the church of S. Sofia.
Sir Richard Colt Hoare - A Classical Tour through Italy and Sicily - published in 1819, but Colt Hoare visited Benevento in 1789.
The wall was pulled down in 1809 by order of Charles Maurice de Talleyrand-Périgord, a French politician and diplomat, whom Napoleon had appointed Prince of Benevento. The relief was moved to the Town Hall of that time: Engravings show The Rape of the Sabines as placed above a fountain which I apprehend has been since destroyed, the marble lying now with several others in the palace yard of the Cardinal Legate who is governor of the town.
Richard Keppel Craven - A Tour through the Southern Provinces of the Kingdom of Naples - 1822 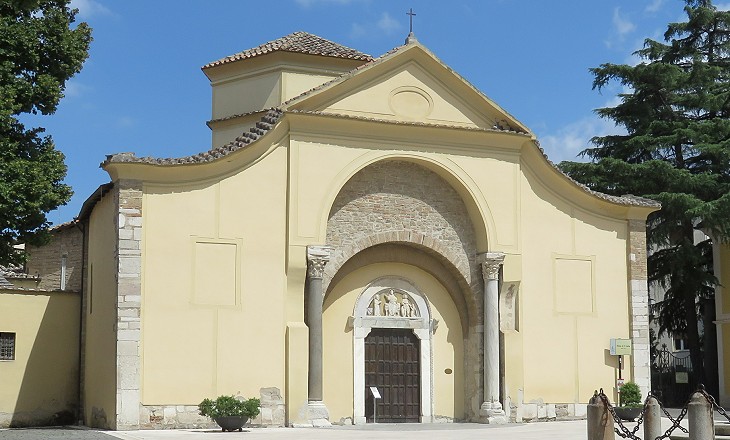 The church was founded in 762 by Arechis II, Duke of Benevento and son-in-law of Desiderius, King of the Longobards. In 774 when the Longobard power was falling apart in all parts of Italy, exception made in Benevento, Arechis dedicated the church to the Holy Wisdom, similar to Hagia Sophia in Constantinople. It was meant to be the national church of the Longobards. The current façade was designed in the early XVIIIth century at the initiative of Cardinal Vincenzo Maria Orsini, Archbishop of Benevento who became Pope Benedict XIII in 1724. 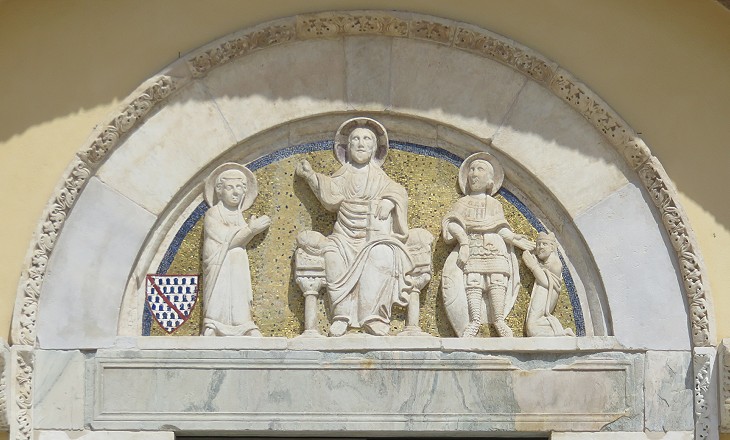 Relief above the entrance

The relief originally stood on the entrance to the enclosure. For a long time it was thought that Arechis was shown in the right corner while being introduced to Jesus Christ by St. Mercury, a IIIrd century Christian soldier and martyr, whose body was buried in the church by Arechis. Today the relief is dated XIIIth century and the kneeling person is identified with an abbot of the Benedictine monastery adjoining the church. 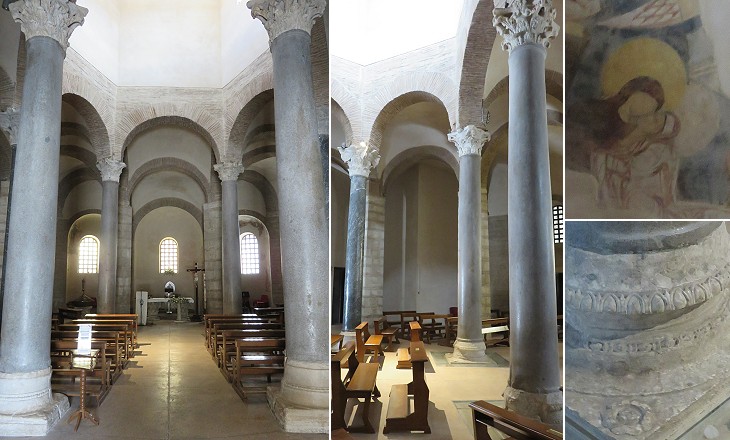 (left/centre) Interior; (right-above) fragment of a fresco in one of the side apses; (right-below) base of one of the columns

The cupola of St. Sophia rests upon a circular colonnade of antique marble in the same manner as those of Santa Maria near Nocera, Saint Sebastian (maybe S. Stefano Rotondo) and St. Agnes (more precisely S. Costanza) at Rome and other buildings erected under Constantine and his family when the arts were declining.
Henry Swinburne - Travels in the Two Sicilies. 1777-1780
The history of this church is similar to that of S. Maria in Cosmedin in Rome, which was redesigned and redecorated in the early XVIIIth century and then brought back to its assumed medieval aspect in the XXth century. Originally the interior of S. Sofia had the shape of a hexagon inserted in a decagon (ten side polygon) which resulted in an overall unusual star design. In 2011, with other Longobard monuments in Italy (e.g. Tempietto Longobardo in Cividale, S. Giulia in Brescia, S. Salvatore at Spoleto and Tempio sul Clitunno near Spoleto), S. Sofia was inscribed by UNESCO in their World Heritage List. 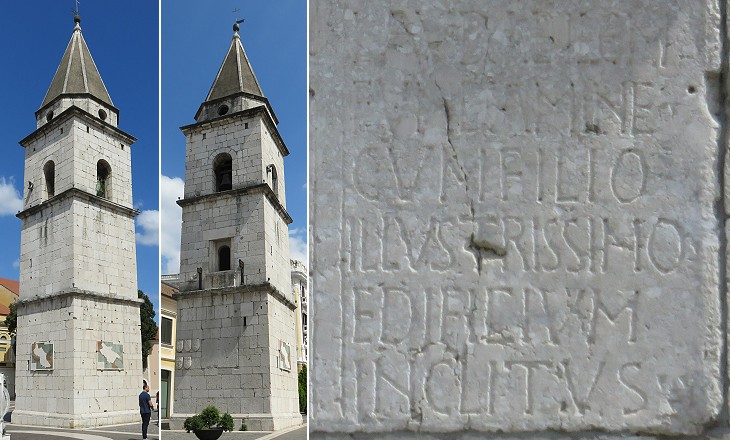 The original bell tower collapsed in 1688 because of a major earthquake and it was rebuilt in a new location, more distant from the church. It retains a Latin inscription which celebrated the construction of the old bell tower in the XIth century. 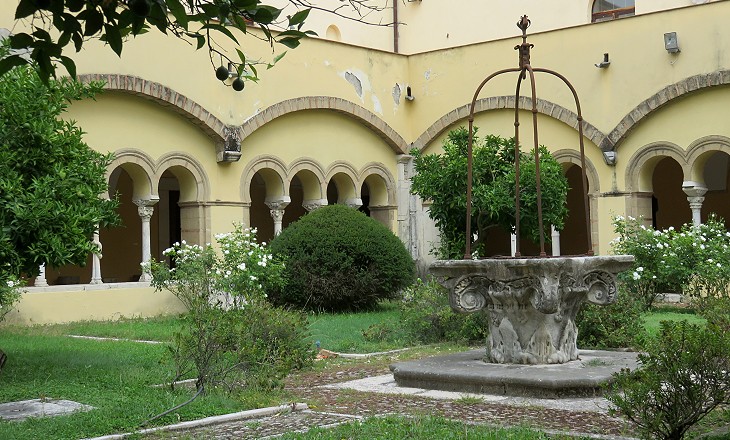 Arechis founded a Benedictine nunnery adjoining the church. It was headed by his sister. Eventually the nuns were replaced by monks who in the XIIth century built the current cloister which retains some elements of the old one. A beautiful ancient capital was used for the well. The arches have a rather Moorish design. Columns of the cloister

The cloister was built by using some ancient columns and others which were made at the time. These columns were small in size and in many other medieval cloisters (e.g. S. Paolo fuori le Mura and Abbazia di Fossanova) similar columns were used in pairs. In S. Sofia instead a pulvino, a piece in the form of a truncated pyramid and a typical Byzantine architectural element, was utilized to bridge the gap between the size of the columns and that of the arches they supported.

Pulvini of the shape of those in S. Sofia are very unusual: their long sizes were decorated with scenes whereas the short ones in some instances housed a head, as that shown in the image used as background for this page, or a saint. Art historians have identified style similarities among three groups of pulvini which have therefore been attributed to a Master of the Elephants, a Master of the Dragons and a Master of the Months. Most likely they were Benedictine monks. 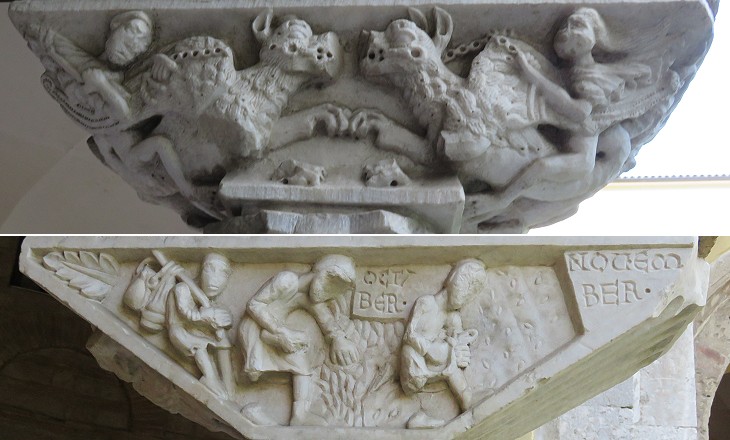