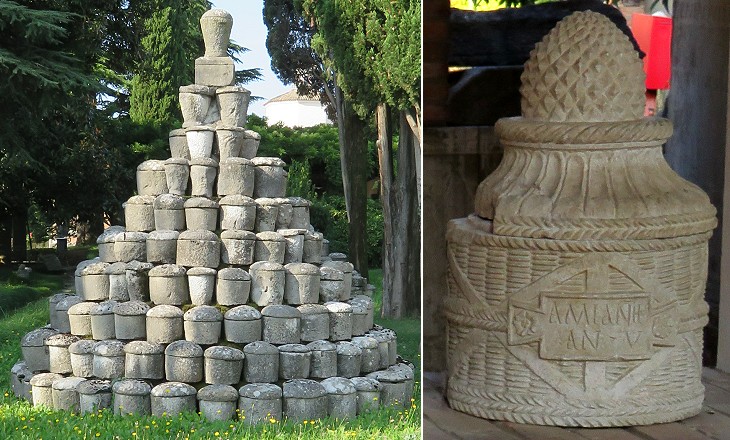 Cremation was the usual method for disposing of corpses in the Greco-Roman world, although inhumation (burial) was also practiced. It appears that the upper classes and in particular the military preferred cremation. The funeral of Patroclus which is described in Book 23 of the Iliad is a famous example of cremation and of the associated ceremonies.
Chance findings by local farmers have unearthed a very large number of cinerary urns in the countryside of Aquileia. Many of them are pretty plain with just a roughly carved name, but some are very elaborate and resemble a wicker basket. 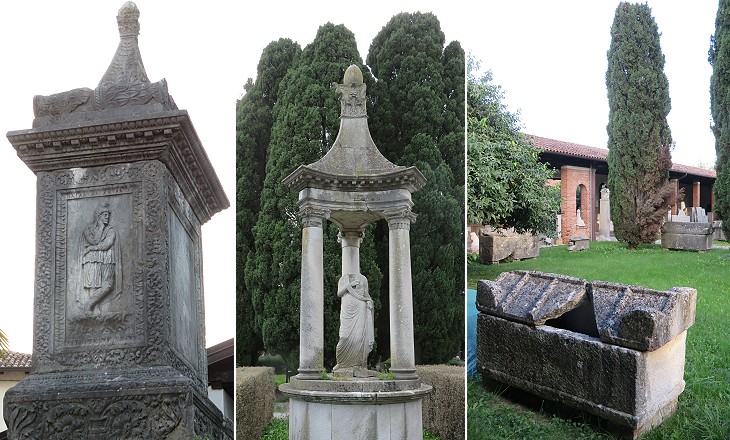 Gigantic monuments were built to house the cinerary urns of emperors (e.g. Hadrian's Mausoleum) or of members of wealthy families (e.g. Cecilia Metella). These buildings and many smaller ones along Via Appia had chambers for periodical ceremonies in memory of the dead. Those found at Aquileia are characterized by an elegant pyramidal or conical roof ending with a fir cone, a symbol of eternity, because firs are evergreen. The design of these monuments was most likely influenced by patterns which developed in the eastern provinces of the Empire (see the Tomb of Absalom at Jerusalem). 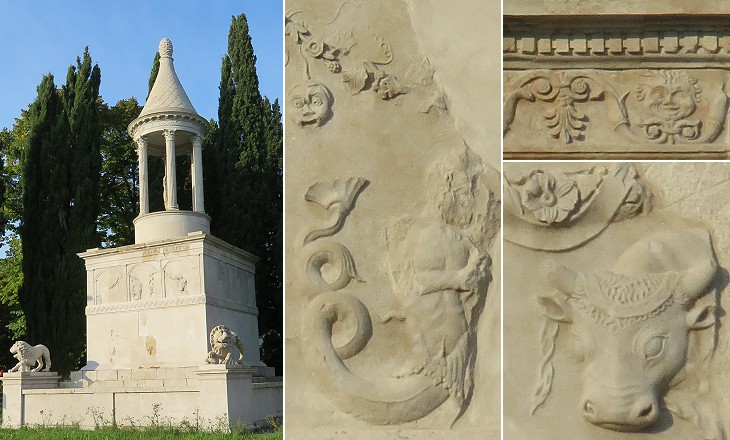 In 1891 some decorative elements of a large mausoleum were found along the road leading to Trieste. In 1956 they were placed on a modern reconstruction of the mausoleum along the main street of Aquileia. It provides the only photo opportunity visitors have to show their friends they visited an ancient Roman town with imposing monuments. The mausoleum is dated Ist century AD, but the important man to whom it was dedicated is unknown. 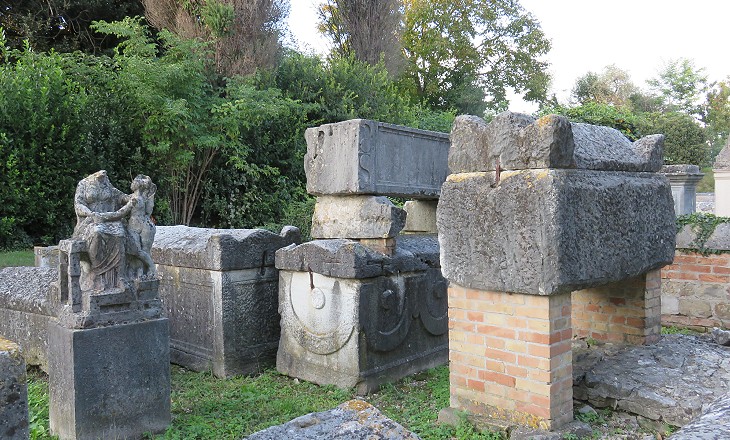 Cemetery: tombs of the Trebi

A small cemetery has been found outside the western limit of Aquileia. It consists of five enclosures separated by brick walls. The sarcophagi/monuments in each enclosure belonged to members of the same family.
A small sculpture (original at the Archaeological Museum) portrays a (dead) woman being comforted by Psyche, a very young girl with wings who accompanied the dead to the underworld. 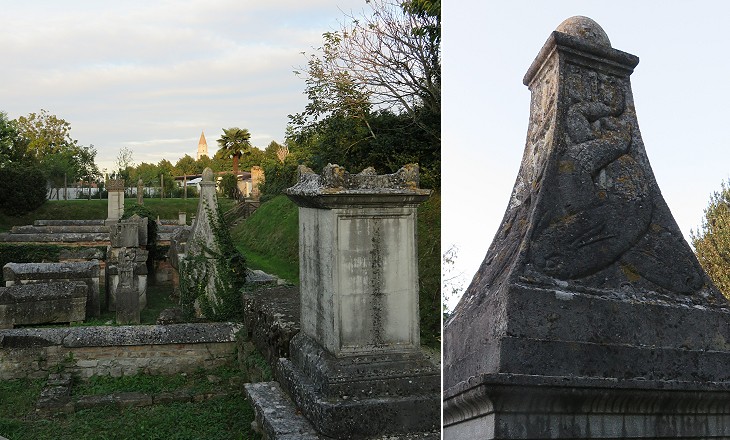 Cemetery (not without some charm at sunset): (left) the five enclosures; (right) altar in the enclosure of the Giuli

Many of the sarcophagi/monuments are finely decorated. Some of their reliefs show jars, most likely a reference to funerary ceremonies. A relief with dolphins around a trident, which was very popular in many contexts (e.g. to decorate baths), when placed on a tomb might have indicated that the dead was a seaman or a ship owner or that he was about to begin his last journey to beyond the Pillars of Hercules, which the living were not allowed to cross. 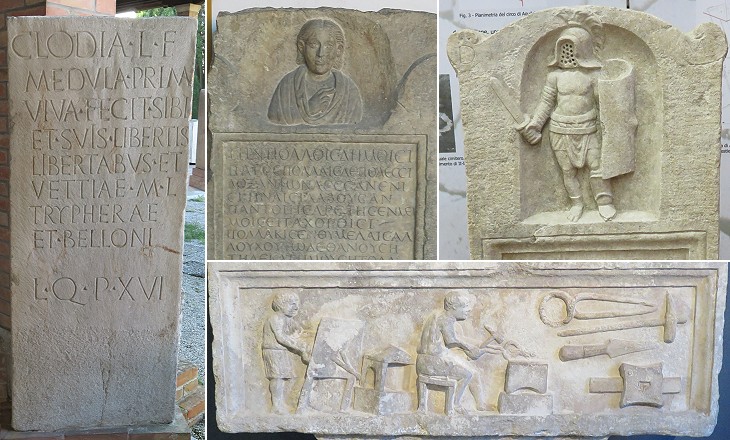 Archaeological Museum: funerary inscriptions and reliefs: (clockwise) "Clodia Medula Prima set this stone in her lifetime for herself, her freed slaves, for Vettia, Tryphera and Bellona"; Greek inscription celebrating mime actress Bassilla; relief portraying Quintus Sossius Albus, a myrmillo, a gladiator who was armed with a short sword, a rectangular shield and a helmet with a crest and a pierced visor; relief portraying a smith and his assistant at work and their tools which included a lock

Funerary monuments to emperors such as Trajan's Column provide historians with information about wars, conquests and methods of fighting. Occasionally they include scenes depicting a ceremony or other social events, but they always give a top-down view of Roman society. Funerary inscriptions and reliefs found at Aquileia are very interesting as they shed light on the lives of ordinary people.
Clodia Medula Prima was one of many citizens of Aquileia who freed their slaves. Manumission, the freeing of slaves, was widely practiced throughout the Roman Empire. Slaves, at least those directly helping their owners, often received a small salary and after many years of compliant service were freed.
The funerary epigram for Bassilla was written by Heraclius, a fellow actor. The epigram says: She had fame on stage and honours for dancing and reciting. (..) She often died on stage, but never in this way. (..) Your colleagues say to you: "Be of good cheer, Bassilla! Nobody is immortal!"
Roman society was no doubt socially stratified, but in towns less so than in the countryside. The complexity of urban life required a variety of services and crafts which were provided by a very active lower middle class. Its members were proud of the contribution they gave to society through their work, as their funerary reliefs show. 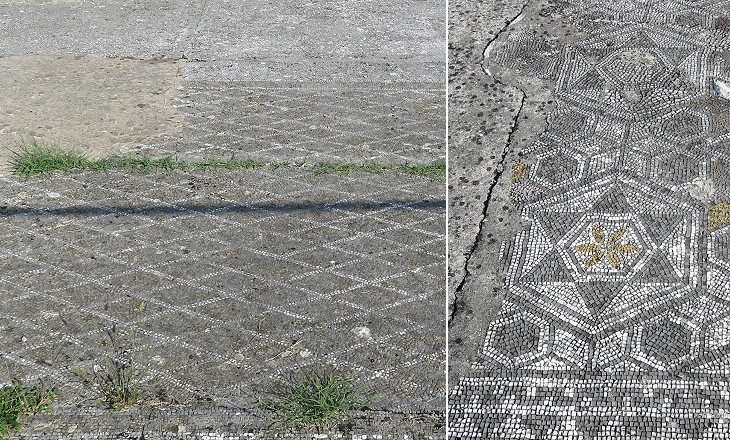 Fondo (piece of land) Cossar (surname of the owner of the farm which was expropriated to carry out the excavation): geometric black and white mosaics

The IVth century mosaic of the Basilica and other mosaics found in early churches are the main attraction of Aquileia and are covered in a separate page.
When we see an ancient mosaic we look at its design or at the size of its tesserae, but this is only the surface of a construction technique which was aimed at providing buildings with a lasting pavement. Vitruvius in De Architectura (a treatise on architecture dedicated to Emperor Augustus) described the making of a floor mosaic. It required seven layers of different materials and the use of excellent mortar. So many Roman mosaics have been found in good condition after 2,000 years because of the care applied to making the layers beneath them. 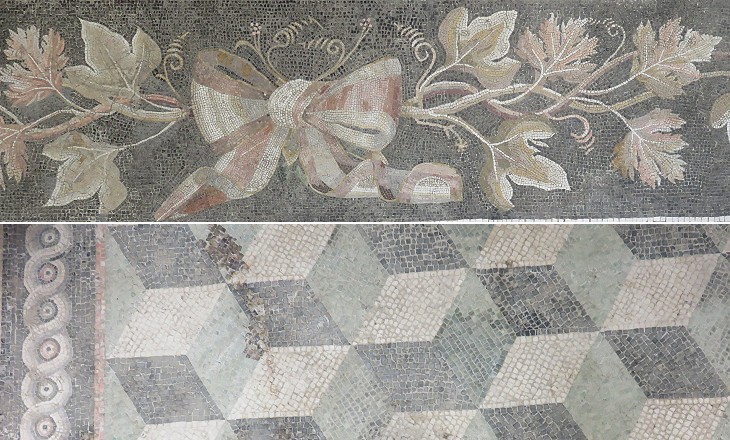 The very elaborate bow mosaic framed the otherwise pretty simple black large mosaic of Fondo Cossar shown in the previous image. I wondered how those living in the house could dare to walk on such a marvellous mosaic, but they did it and they did not damage it. The image used as background for this page shows another elaborate decorative pattern.
Francesco Borromini had not seen the mosaic with an optical effect shown above when he designed the new floor of S. Giovanni in Laterano, but similar ones at Villa Adriana. A mosaic with an optical effect identical to that of Aquileia can be seen on Malta. 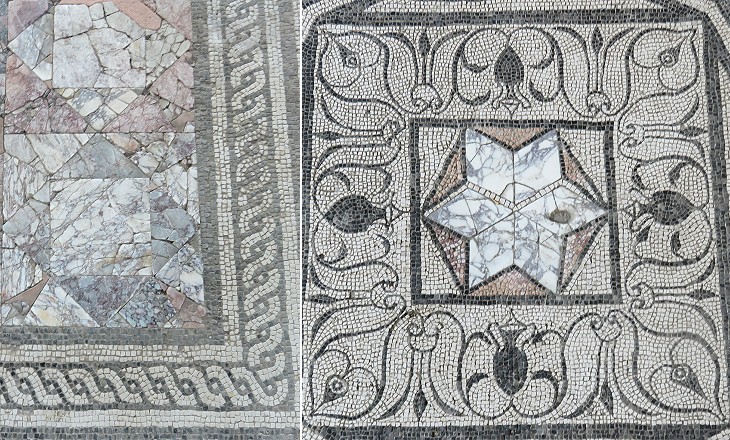 The House of Augustus and the suburban villa of Livia, his third wife, had mainly white floor mosaic, because the walls were entirely covered by vividly coloured frescoes. A mainly white floor mosaic had the advantage of reflecting the light coming from the entrance (rooms had no windows). Overall the same approach can be observed in the houses of Pompeii (destroyed in 79 AD) where the focus of the decoration is on the frescoes of the walls rather than on the floor mosaics.
The use of coloured marbles in substitution or together with mosaics became more frequent in the IInd century AD because fragments of marbles from abandoned or destroyed buildings became easily available (see Villa dei Quintili).

In 1859 the fragments of an almost unique floor mosaic were found in a cubiculum (small bedroom) at Fondo Cossar. Its subject fit a passage by Pliny: (In the art of floor mosaics) the highest excellence has been attained by Sosus, who laid, at Pergamus, the mosaic pavement known as the "Asarotos oikos"; from the fact that he there represented, in small squares of different colours, the remnants of a banquet lying upon the pavement, and other things which are usually swept away with the broom, they having all the appearance of being left there by accident.
Pliny the Elder - Historia Naturalis - Book XXXVI:60 - Translation by J. Bostock and H. T. Riley.
Only another similar floor mosaic had been found until then at Horti Serviliani outside the walls of Rome in 1833. The purpose of the mosaic was to show the luxury of the banquets which were offered by the landlord, but in general xenia, fruit and food for the guests, were depicted in floor mosaics before the banquet took place, see some examples in Tunisia. 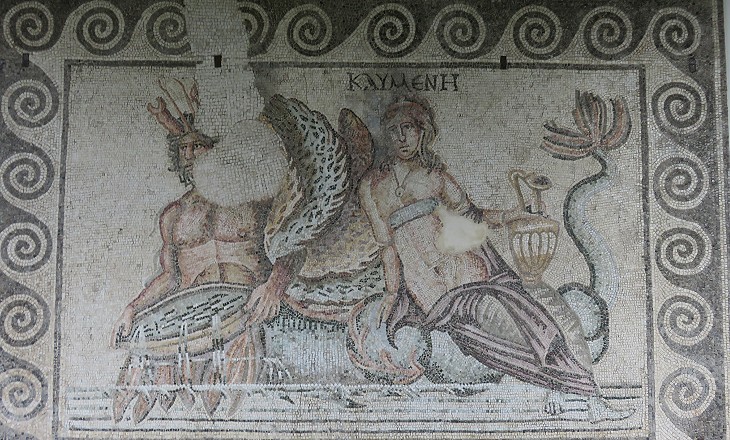 In 301 AD Emperor Diocletian issued a decree to fix the price of commodities and services throughout the whole Roman Empire. The attempt failed, but its list of prices/wages provides a lot of information on many matters including developments in mosaic making as it defines a specific reward for pictor imaginarius, i.e. the artisan able to make a painting-like mosaic.
The pictor imaginarius who made the above mosaic perhaps was not very talented, he had however a precise understanding of the iconography of the sea creatures he portrayed, as if he had seen other similar mosaics at Antioch, Zeugma or Utica. 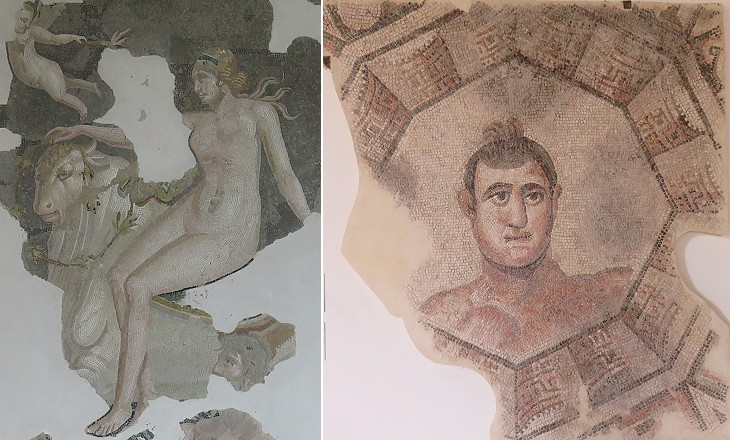 The pictor imaginarius who made the Rape of Europa was definitely a very talented one. He gave depth to the bodies of Europa and Zeus (the bull) by using slightly different tones of colour.
The portrait of the wrestler is interesting for the pig-tail curl detail which can be noted in other mosaics at Dion and Sfax.
The similarities among mosaics from very different locations highlighted in this and other pages, suggest that the Roman Empire was a "global village" in an embryonic phase, notwithstanding the lack of modern media and electronic equipment. 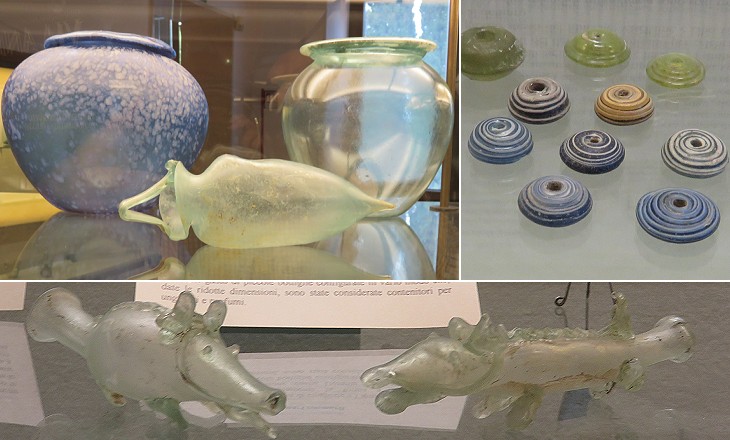 Murano, near Venice, enjoys a worldwide reputation for its glassmaking workshops. Traditionally the beginning of this activity at Venice is attributed to artisans from Constantinople who relocated there after the 1204 Fourth Crusade. A tradition of glassmaking however already existed in north-eastern Italy because Aquileia had been for centuries a manufacturing centre of various types of glassware, mainly small containers for perfumes. Glassware stamped with the name of the Aquileia manufacturer has been found in Austria. 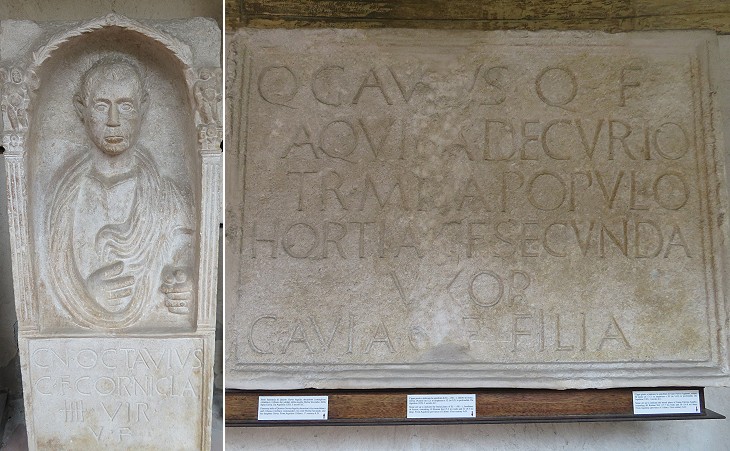 Lapidary Museum of Avignon: funerary urn found at Aquileia and previously in the Nani collection: front and side relief 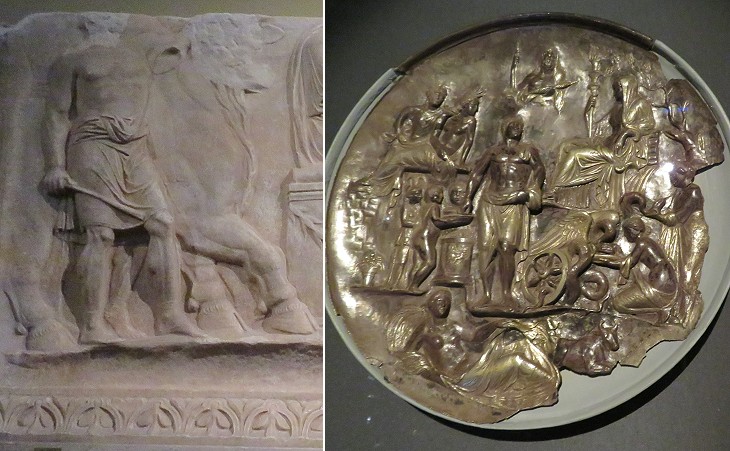